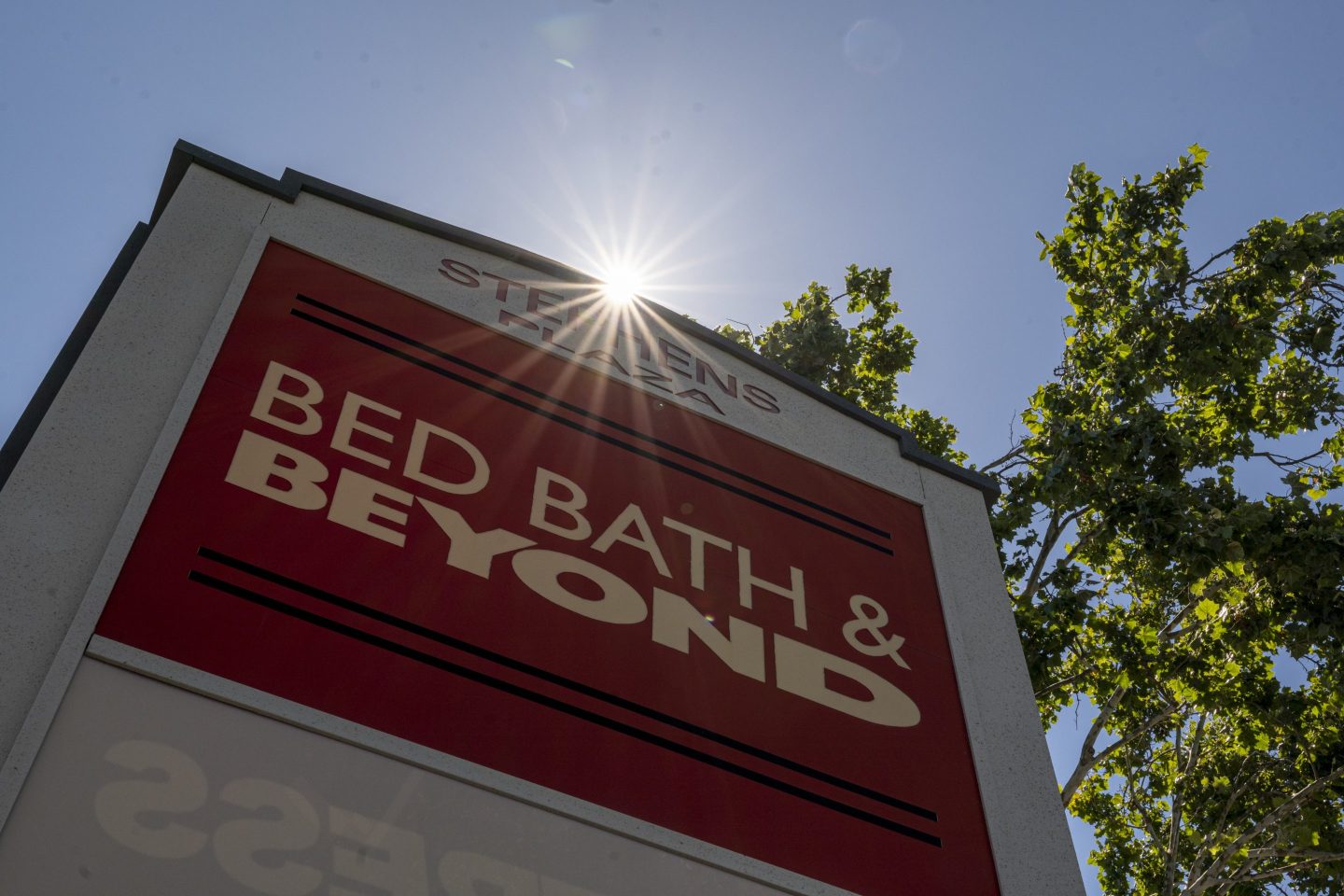 The sun may be setting on Bed Bath & Beyond after its single largest investor dumped his holdings in the stock days before the company sought help from debt restructuring experts.
David Paul Morris—Bloomberg/Getty Images

Investors in Bed Bath & Beyond are going to have to buckle up as the roller coaster ride in shares of the ailing retail chain continues.

Just a day after its market cap lost a fifth of its value following this week’s massive run-up in price, the meme stock popular on the Reddit bulletin board WallStreetBets is set to plunge a further 40% at the opening as more news emerges highlighting the company’s dire financial straits.

Citing a person with knowledge of the decision, Bloomberg reported on Thursday that the company’s board is retaining the services of Kirkland & Ellis, a consultancy specializing in companies in need of debt restructuring.

A distressed balance sheet may explain why Canadian billionaire Ryan Cohen, the company’s single largest investor with a stake of nearly 10%, was in such a hurry to sell his holdings just as the stock peaked.

BBBY’s financials are deteriorating. Just in the fiscal first quarter that ended May 28, the company burned through half a billion dollars in cash, leaving just $200 million in the till.

If necessary, it can draw on the $700 million that remains in an asset-backed credit line—though lenders may very well have attached increasingly punitive conditions.

Much of the current cash crunch stems from an unfortunate mismatch in the day-to-day management of its operations.

A surge in expenses to pay for the arrival of products with long lead times, often goods sold under the chain’s own proprietary brands, met with a sudden collapse in demand due to consumer fears over inflation.

Bloated warehouses both drained its coffers as well and exacted a hefty non-cash writedown that contributed to the company’s fiscal Q1 net loss ballooning to $358 million.

“We’re taking immediate and aggressive actions on cost, capital spending, and in particular on inventory,” Gustavo Arnal told investors in June, adding that seasonal headwinds would continue to weigh on cash conservation during the second and third fiscal quarters.

But excessive levels of stock gathering dust is not the only reason why management now has to scrounge under sofas looking for spare change.

The company could have had another $590 million on its balance sheet had it not been for the board returning cash to shareholders in the form of stock buybacks in its previous fiscal year—a decision that in retrospect appears ill-advised.

With cracks fast emerging in its balance sheet, professional investors are heading for the hills.

After news broke of Cohen’s divestment, Bed Bath & Beyond’s 2044 corporate bond sank to roughly 27 cents on the dollar, according to the Bloomberg report.

Since creditors are typically guaranteed to be the first to be made whole in the event of a liquidation, it’s never a good sign when a company’s debt maturing so far into the future no longer trades for face value, much less at such distressed levels below par.

On Wednesday, the company sought to allay market fears by saying it was “working expeditiously over the past several weeks with external financial advisors and lenders on strengthening our balance sheet,” and pledged to provide more information in an update at the end of August.

News of the Kirkland Ellis mandate suggests the company is concerned that should conditions deteriorate further, it may eventually reach a point where it is no longer able to pay its bills.

Meanwhile, sentiment in the stock is suffering after investors accused Cohen of a “rug pull.”

For leading his followers down a primrose path only to use them as his exit liquidity, they argue, Cohen merits an investigation by the Securities & Exchange Commission.

The Canadian had amassed a fan following, and initially his supporters in the WallStreetBets community still defended him, arguing he was only laying the groundwork and hadn’t used them as exit liquidity to unload any shares.

When the truth emerged, even Reddit began turning against him.

“I’m holding what I have left out of pure spite,” posted one investor on the subreddit page, while another, referring to Cohen’s nationality, simply called him a “moosef*****”.

Cohen wasn’t the only one who made out like a bandit from his well-timed sale of BBBY stock.

A student at the University of Southern California claimed to have liquidated his $25 million investment in the brick-and-mortar retailer, raised with the help of friends and family, after the share price quadrupled in value.

“The significant appreciation of BBBY’s share price combined with the fact that I am leaving for school tomorrow played critical roles in closing the Position,” Freeman wrote in a post on Reddit.