Bed Bath & Beyond shares jump as much as 78.8% after legendary meme stock investor’s latest bet 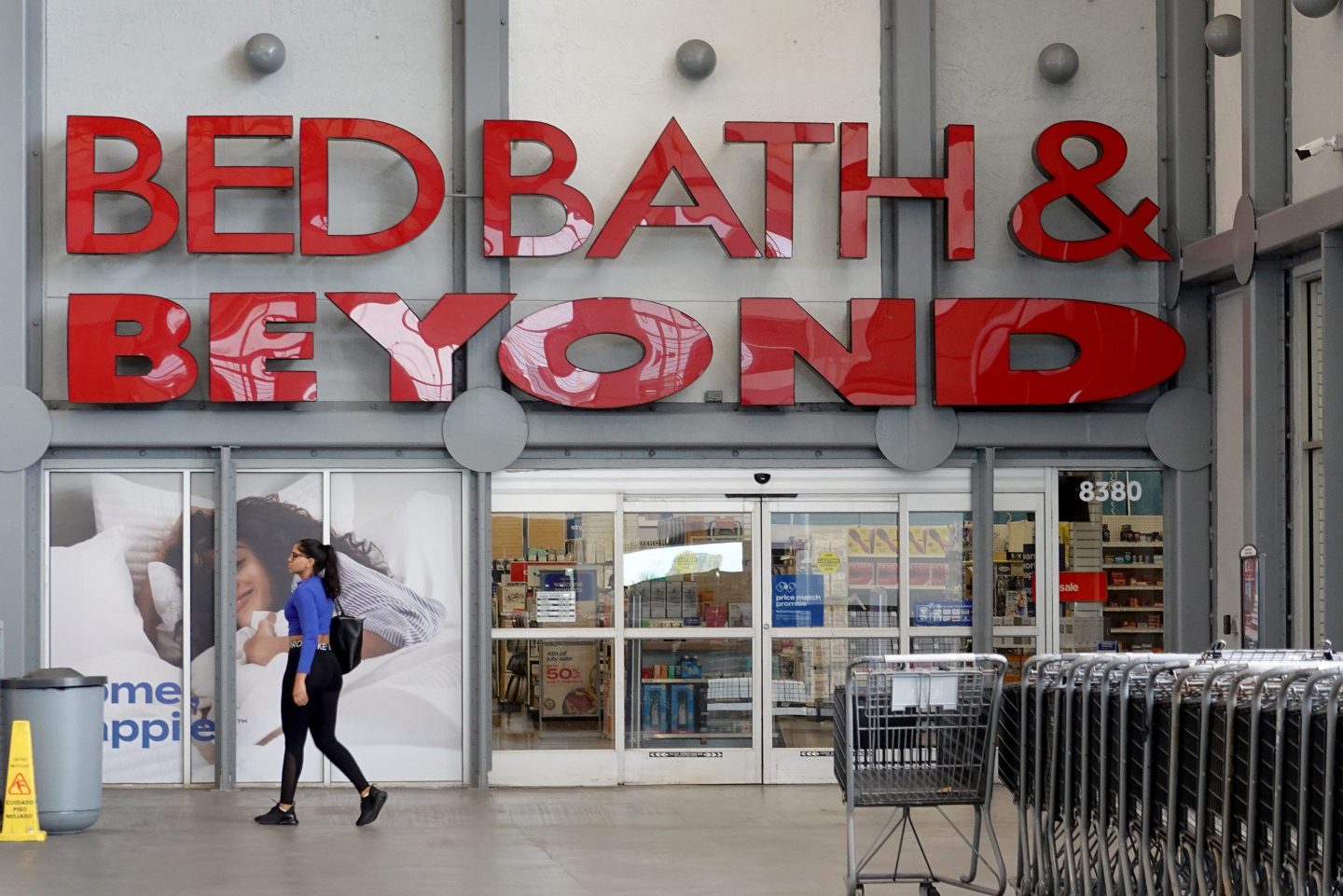 Shares in Bed Bath & Beyond have fallen below $7; Goldman Sachs believes they could fall as far as $2.
Joe Raedle—Getty Images

Shares in Bed Bath & Beyond surged more than 70% on Tuesday as retail investors on social media flocked to the stock after a filing revealed activist investor Ryan Cohen is holding steady on his bet.

The stock rose as much as 78.8% to $28.60 a share during the Tuesday session, according to Reuters, and trading was halted multiple times for volatility.

The influx of trading brought the share price up 440% in the past month.

The filing that triggered the short squeeze revealed Ryan Cohen’s investment fund RC Ventures had maintained his percentage ownership of Bed Bath & Beyond and held on to his bet that the price of shares in the home goods retailer would increase to $80.

Cohen, the founder of online pet goods retailer Chewy and the chairman of GameStop, bought a 10% stake in Bed Bath & Beyond in March this year and also snapped up call options on 1.67 million shares with a strike price ranging from $60 to $80 expiring in January 2023.

Call options are financial contracts that allow an investor to buy a share at a certain price and time, meaning Cohen has essentially bet Bed Bath & Beyond stocks will rise to $80 by the beginning of next year.

Who is Ryan Cohen?

Cohen is a Canadian billionaire activist investor who became a star in the retail investing meme stock community after he disclosed a 10% stake in GameStop in August 2020, making him the company’s largest investor. He joined GameStop’s board in January 2021, which in part triggered the infamous January meme stock rally.

“You see his name [Cohen] associated and it gets the buzz going. So right now social media buzz is flying around Bed Bath & Beyond and it is spilling over other stocks as well,” Dennis Dick, a retail trader at Triple D Trading, told Reuters.

Trading began as soon as markets opened and by 2:30 p.m. ET, 300 million shares in Bed Bath & Beyond had changed hands.

The short squeeze also spilled over into other meme stocks including meal kit company Blue Apron, barbecue grill maker Weber, and sports streaming site FuboTV, which all jumped between 15% and 53%. The other company in Cohen’s RC Ventures, GameStop, also spiked 5%.

There were some big hedge fund losers. Asset management firm FMR sold off 99.99% of its Bed Bath & Beyond stake on Aug. 11 before the stock price shot up.

One trader on Reddit claims he took out a $27,000 loan to go all in on Bed Bath & Beyond shares nine days ago on Aug. 8—a bet that could have made him $20,000, had he not pulled his investment two days later when the stock dipped.

The short squeeze in Bed Bath & Beyond shares mirrors what happened in January 2021, when retail traders rallied the price of the company to $53.90. The January short squeeze was primarily triggered by users of the subreddit r/wallstreetbets, an internet forum on the social news website Reddit.

Despite the stock rally and a promise of a tripled value in stock price, Bed Bath & Beyond’s internal outlook looks bleak. It has seen struggling revenues and earnings for the second half of the last decade, and its shares dropped from around $80 in 2014 to $4 at the start of the pandemic.

Following the January 2021 short squeeze and Cohen buying into the company in March 2022, there has been a drive to transform the company’s business model and narrow its focus.

“We believe Bed Bath needs to narrow its focus to fortify operations and maintain the right inventory mix to meet demand, while simultaneously exploring strategic alternatives that include separating [subsidiary] buybuy Baby, Inc and a full sale of the Company,” Cohen wrote in a letter to the company’s board on Mar. 7.

In the company’s latest quarterly earnings report in 2022, Bed Bath & Beyond saw its same-store sales fall 24% and revenue decrease to $1.46 billion. The company also indicated it was drowning in $3.28 billion in debt with only $107 million cash on hand on its balance sheet.

“The problem is the company is now in a terrible place. It needs to refine its turnaround strategy from a very weak financial position and at a time when the market for home furnishings is in the doldrums,” Saunders writes.