The CHIPS-Plus Act could flop for many reasons. A recent dip in chip demand isn’t one of them 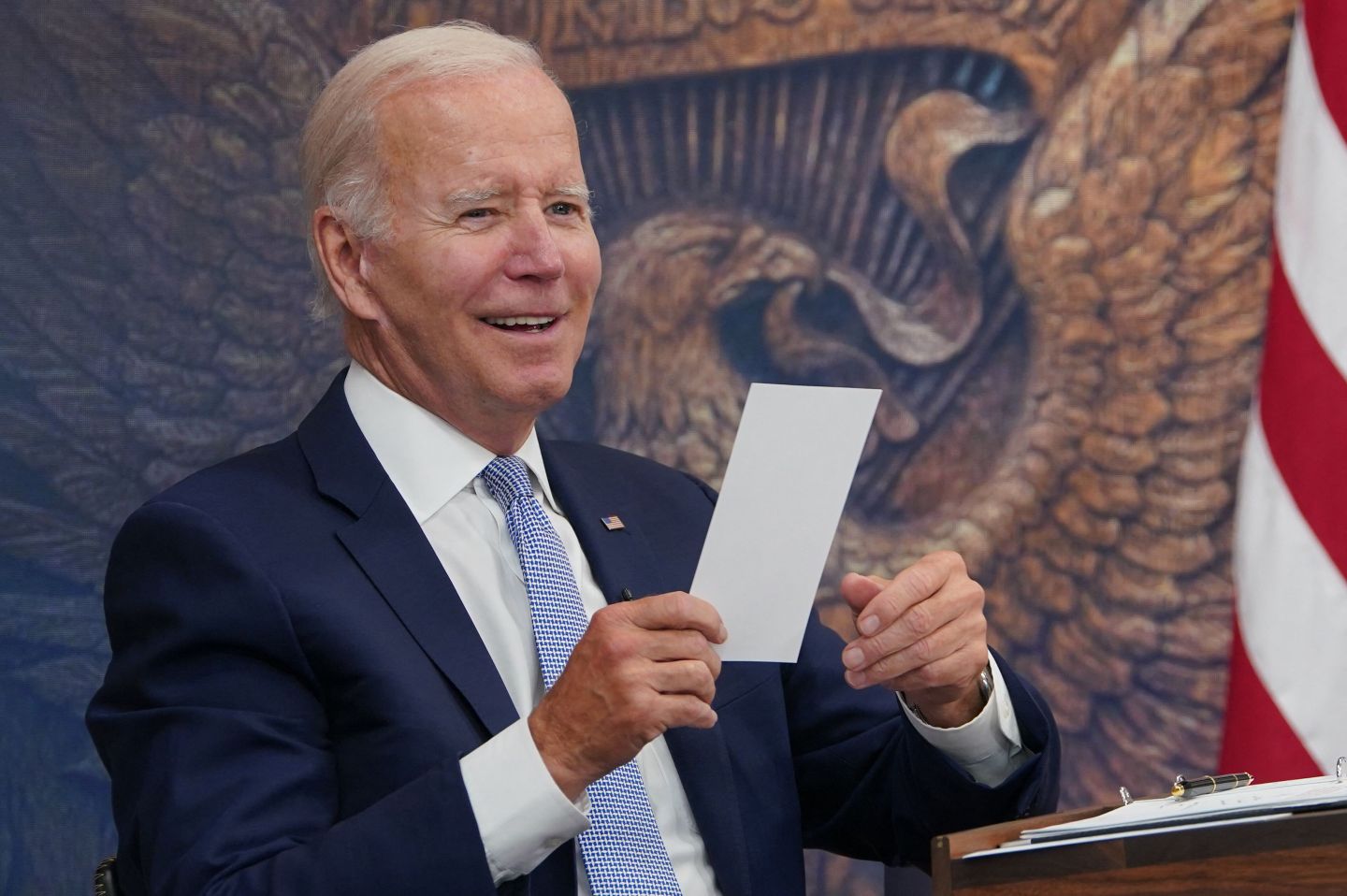 The ink had barely dried on Joe Biden’s signature on the CHIPS-Plus Act, a legislative package that includes $52 billion in subsidies for expanding semiconductor manufacturing in the U.S., when a wave of unfortunately timed headlines hit the news.

Each story generally touched on the same theme: The semiconductor industry has hit turbulence in the past few months, with demand waning, inventory piling up, and some raw materials, such as rare-earth metals and gases, remaining in short supply. The natural juxtaposition of this tumult with a massive infusion of federal cash could suggest that lawmakers in Washington were unnecessarily pumping taxpayer money into a sector that doesn’t need the support.

“It’s sort of darkly humorous,” Bernstein Research analyst Stacy Rasgon told Bloomberg. “The politicians are going to find out how quickly shortages can resolve themselves when the industry turns.”

Some patience, however, is in order.

As a period of uncertainty dawns on semiconductor companies, it’s worth remembering that the CHIPS-Plus package represents a long-term investment in a critical industry, one designed to ride the ups and downs of a highly cyclical sector.

The subsidies ultimately aim to increase domestic chip manufacturing, which requires constructing massive semiconductor plants, known as fabs, on American soil. In recent announcements about their plans for building new, multibillion-dollar fabs in the U.S., three of the industry’s power players—Taiwan Semiconductor Manufacturing Co., Samsung, and Intel—each said they would need at least three years to bring their facilities online.

In recognition of this reality, federal officials expect that the $52 billion in subsidies will be spread over nine years, with most of the money delivered in the back half of the decade. According to estimates from the nonpartisan Congressional Budget Office, only 30% of the funds, or roughly $16 billion, will be disbursed by the end of 2025.

The timing could actually prove fortuitous for semiconductor manufacturers. While industry analysts forecast a down cycle over the next two years, some also foresee an upswing sometime in the middle of the decade as new, chip-dependent technologies come online and global economic pressures ease.

CHIPS-Plus critics, including some Republican lawmakers, still have plenty of reasons to be skeptical about the subsidies.

The money likely will not turn the U.S., which manufactures a tiny fraction of the world’s most advanced semiconductors, into a global chipmaking powerhouse. Government and industry leaders in South Korea, home to Samsung and several other top chip companies, unveiled national plans in May for spending about $450 billion over the next decade on the industry (it was unclear how much money each side could contribute). Taiwanese officials also said in January that they will use subsidies to maintain the island’s status as a leading chip manufacturing hub.

In addition, Intel, expected to receive a sizable chunk of CHIPS-Plus money, remains a risky bet to win market share in the competitive semiconductor manufacturing business. The American chipmaker, which has fallen in stature over the past decade, last month posted dreadful second-quarter earnings that CEO Pat Gelsinger partially attributed to “our own execution issues.”

The CHIPS-Plus Act could very well go down as a future case study in federal foolishness. If it does, a lack of present-day demand won’t be the reason.

Seeking steadier ground. Apple is exploring opportunities for assembling some of its watches, MacBooks, and HomePods in Vietnam, a potential move that would reduce the tech giant’s reliance on manufacturing in China, Nikkei Asia reported Wednesday. Apple suppliers Foxconn and Luxshare Precision Industry are running test productions of the company’s watch product in Vietnam, with discussions ongoing about trial production lines for MacBook and HomePod hardware. Multiple media reports this spring suggested Apple was looking to shift some manufacturing operations out of China and into its Asian neighbors amid frustrations with the republic’s COVID lockdown policies and mounting geopolitical pressures.

Everybody loses sometime. Chinese tech conglomerate Tencent revealed its first year-over-year quarterly revenue decline in company history Wednesday, the result of COVID lockdowns in parts of the country and a steady government crackdown on gaming, CNBC reported. Tencent posted about $19.8 billion in second-quarter revenue, down 3% from the prior year, and fell fractionally short of analysts’ sales forecasts. The company’s gaming revenue slid 1%, as Chinese government officials continued to limit children’s gameplay time and approve few new titles from developers.

A tiebreaker vote. Employees at an Amazon warehouse in Albany, N.Y., have secured enough support to hold a union election, setting the stage for another showdown between the e-commerce giant and organized labor, the Washington Post reported Tuesday. Workers seeking the union election are coordinating with the Amazon Labor Union, which led the first successful union vote against the company earlier this year, earning a victory at a New York City warehouse. The Amazon Labor Union subsequently lost a second unionization drive at another New York City facility, while Amazon appears to have won a separate election held earlier this year at an Alabama warehouse.

Curbing campaign chicanery. TikTok plans to stop content creators from posting videos that contain paid political messages, part of the short-form video platform’s efforts to reduce violations of its policies in the run-up to the 2022 midterm elections, Reuters reported Wednesday. The ByteDance unit has banned paid political ads on its platform since 2019, but political campaigns have worked around the prohibition by paying influencers to make statements on behalf of candidates. Meta officials also said Tuesday that they will institute a blackout on political ads in the week leading up to November’s midterms.

Advancing a level. Netflix’s venture into mobile video gaming has been one of the stranger things to emerge from the tech industry in the past few years. The company hasn’t said too much about its ultimate plans, and early results have been difficult to gauge. A new Protocol report, however, suggests that the streaming giant is making steady headway, sticking closely to its plan to gradually build its gaming portfolio over multiple years. New industry estimates show Netflix’s game downloads jumped over the past three months, largely owing to the success of its Stranger Things–branded games following the premiere of the show’s fourth season in May.

It’s true: Netflix has yet to release a true blockbuster game, and its small but growing catalog of mobile games isn’t nearly as popular as some of its biggest shows and movies. However, the company’s gaming efforts are on an upward trajectory, according to data mobile intelligence company Sensor Tower recently shared with Protocol. In fact, July was the best month yet for Netflix’s gaming efforts.

“Netflix is really just at the beginning of implementing its strategy for a new games business, and it’s not off to a bad start,” Sensor Tower mobile insights strategist Craig Chapple told Protocol. “With an increasing portfolio of globally recognizable entertainment IP, there’s a lot of potential here.”

For the company behind one of last year’s buzziest crypto IPOs, selling electricity is now more profitable than mining Bitcoin, by Shawn Tully

American Airlines bets on faster-than-sound jet travel—but it won’t be ready until 2029, by Chloe Taylor

Airbnb is cracking down on party animals and rolling out tech to catch ‘high-risk’ bookings, by Alice Hearing

I’ve been a full-time Lyft driver since 2017. Here’s how ‘flexibility’ and ‘choice’ just don’t apply to underpaid ‘gig work’ that requires 50 hours a week, by Mike Robinson

A kick in the teeth. For four blissful hours late Tuesday, an Elon Musk tweet let Manchester United fans believe that the world’s wealthiest man was buying their beloved English football team from the wretched ownership of the American Glazer family. Think of the possibilities. Musk pouring some of his billions into the dysfunctional franchise, lifting the team back to its once great heights. Musk palling around with Red Devils royalty like David Beckham, Sir Alex Ferguson, and Roy Keane. Musk and diva striker Cristiano Ronaldo trying to fit their egos in the same room. Alas, there would be no South African Ted Lasso tale here. The perennial prankster acknowledged he was kidding around, calling the comment part of a “long-running joke on Twitter.” After last weekend’s 4–0 embarrassment at the hands of itty-bitty Brentford, it’s just more salt on United fans’ painful wounds.

Editor’s note: This article has been updated to correct the amount of money estimated by the Congressional Budget Office to be disbursed by 2025 through the CHIPS-Plus Act.