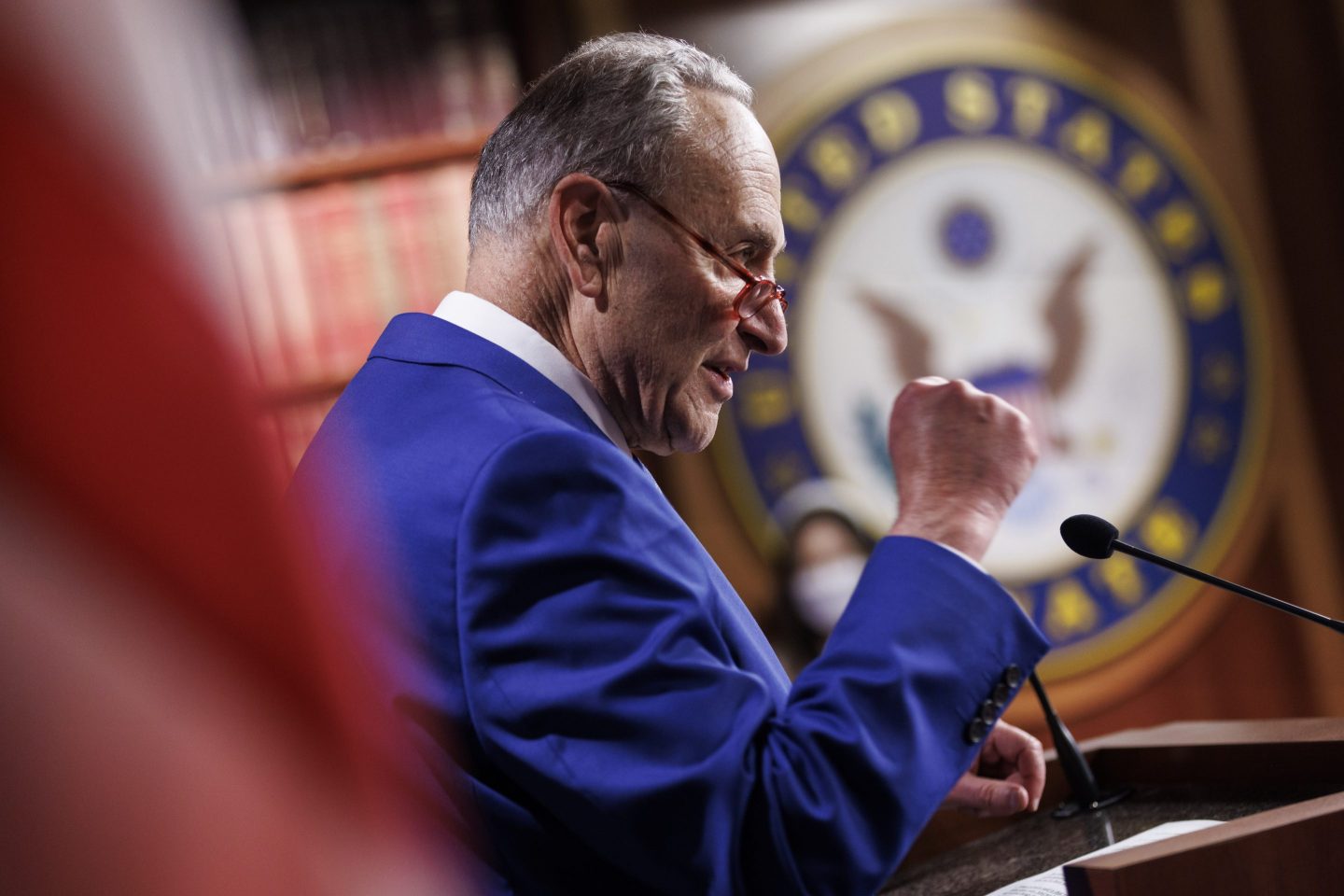 Washington wants to defend the U.S. against climate change—but not quite as much as legislators want to secure U.S. interests against China.

On Sunday, the Democrats’s climate bill, dubbed the Inflation Reduction Act, passed the Senate after an all-night “vote-a-rama” to include or reject amendments. The bill unlocks over $300 billion in spending on green energy and climate reform, including funding for consumer tax credits to offset the costs of electric vehicles.

However, the bill stipulates that, to qualify for the tax credit, EV makers must complete vehicle assembly in North America and source a significant percentage of battery components (including metals like lithium, nickel and cobalt) from countries that have free trade agreements with the U.S.

China, the world’s largest producer of those vital components, does not have a free trade agreement with the U.S. And in case the bill’s intention to cut China out of the U.S. EV supply chain wasn’t clear enough, a separate provision excludes vehicles made with critical materials that are produced by a “foreign entity of concern,” including China, starting in 2024.

According to industry group the Alliance for Automotive Innovation, the Inflation Reduction Act’s initial provisions on sourcing and manufacturing would render 70% of U.S. electric vehicles ineligible for the tax credits. Once the clause outlawing supplies from China goes into effect, no vehicles will be eligible.

“Unfortunately, the EV tax credit requirements will make most vehicles immediately ineligible for the incentive. That’s a missed opportunity at a crucial time and…will also jeopardize our collective target of 40-50% electric vehicle sales by 2030,” said John Bozzella, president and CEO of the Alliance for Automotive Innovation.

Automakers lobbied Senators to relax the sourcing limitations ahead of it passing the Senate without any luck. Last week, Sen. Joe Manchin (D–W. Va)—whose support was pivotal in the bill passing at all—told reporters he “[doesn’t] believe that we should be building a transportation mode on the backs of foreign supply chains.”

Automakers are already increasing production capacity for battery processing in the U.S., but the timeline set by the Senate through the Inflation Reduction Act might be too aggressive.

Simon Moores, chief executive of lithium market analyst Benchmark, said in a note last week that “it is almost impossible that any Fair Trade Alliance countries—of which Australia and Chile are the stand out—could fill China’s raw material gap for the USA’s EV demand between now and 2024.”

Moores estimates it will take “the best part of this decade” to establish a sufficient supply chain in the U.S. Yet it remains unclear whether the consumer tax credits—offering a maximum $7,500 rebate on SUVs that cost less than $80,000 or sedans under $55,000—are a sufficient incentive for automakers to even bother investing in de-Sinicizing their supply chains.

The Inflation Reduction Act will stop providing consumer cash back on EVs after 2032—which is about when the U.S. might have developed supply chains sufficient enough to circumvent China.

Lobby groups suggest lawmakers push back their timeline for eliminating China-sourced materials from EV supply chains and extend the tax credits further into the next decade to provide automakers more reasonable incentives. Otherwise lawmakers risk gutting a key provision of their own climate bill for the sake of deepening a division with China.

Roughly 60% of the European Union, plus the U.K., is facing drought conditions after a successive swell of heat waves slammed the continent this summer. According to the European Drought Observatory, 45% of the European area is under “warning,” where soil moisture has evaporated to critical lows, and 15% is under “alert,” at risk of crop failure. Besides jeopardizing agriculture, the drought is straining power plants, drying up drinking water and draining waterways vital for freight transport. But climate change is predicted to make droughts like these more common. CNN

The International Monetary Fund is urging European governments to pass the cost of soaring energy prices onto consumers, as the bank argues increasing prices will drive down demand. But annualized consumer prices for energy have swollen 40% across the Eurozone, and 57% in the U.K., eating into household budgets. The IMF suggested governments provide means-tested electricity and gas subsidies to help poorer households. FT

Spain is the latest European country to restrict the commercial use of air conditioning, instructing public buildings and offices to set the thermostat no lower than 27C (80F), in a bid to save on energy consumption. Greece has also limited cooling to 27C while Italy has conceded to 25C. The Spanish government has also instructed store fronts to switch off external lights by 10 p.m. and, a week ago, Premier Pedro Sanchez suggested office working men stop wearing ties, as a strategy to feel cooler. NYT

Russia banned oil majors based in “unfriendly” countries from exiting investments in strategic assets before the end of the year on Friday, preventing U.S. firms like Exxon from selling shares in Russian joint ventures. Exxon announced it was in talks to offload its 30% holding in Russia’s Sakhalin-1 oil field, which it operates, days before the Russian decree blocked its move. But production at the field has been on hold since May, when Exxon first decided to exit the operation. WSJ

The other supply-chain crisis: The Rhine is drying up, and it could become the ‘Achilles’ heel’ of European energy, Deutsche Bank warns by Alena Botros

The EU is calling natural gas ‘green,’ but critics aren’t buying it by Laurie Clarke

‘Any attack to a nuclear plant is a suicidal thing’: UN chief issues stark warning about Russian struggle over Ukraine power plant by Tristan Bove

Child care is out, climate is in: Here’s what got axed—and didn’t—from Biden’s big bill, with Manchin and Simena’s sign-off by Colin Lodewick

This funky looking electric car wants to save the planet. Here’s what it’s like driving it by Alexei Oreskovic

There are 46 countries or regions worldwide that are engaging in carbon pricing, either by directly taxing companies for emissions or by operating carbon trading schemes where industries can buy and sell carbon credits. But, across Asia, the cost of carbon is too low to discourage pollution. The IMF says carbon needs to trade at roughly $75 a tonne to effectively limit global warming. In South Korea, carbon is at roughly $21 per tonne; in Japan the cost is close to $2 per tonne; Singapore is $3 per tonne; and in China, which operates the world’s largest emissions trading scheme, the cost of carbon is less than $10 per tonne.