‘Any attack to a nuclear plant is a suicidal thing’: UN chief issues stark warning about Russian struggle over Ukraine power plant 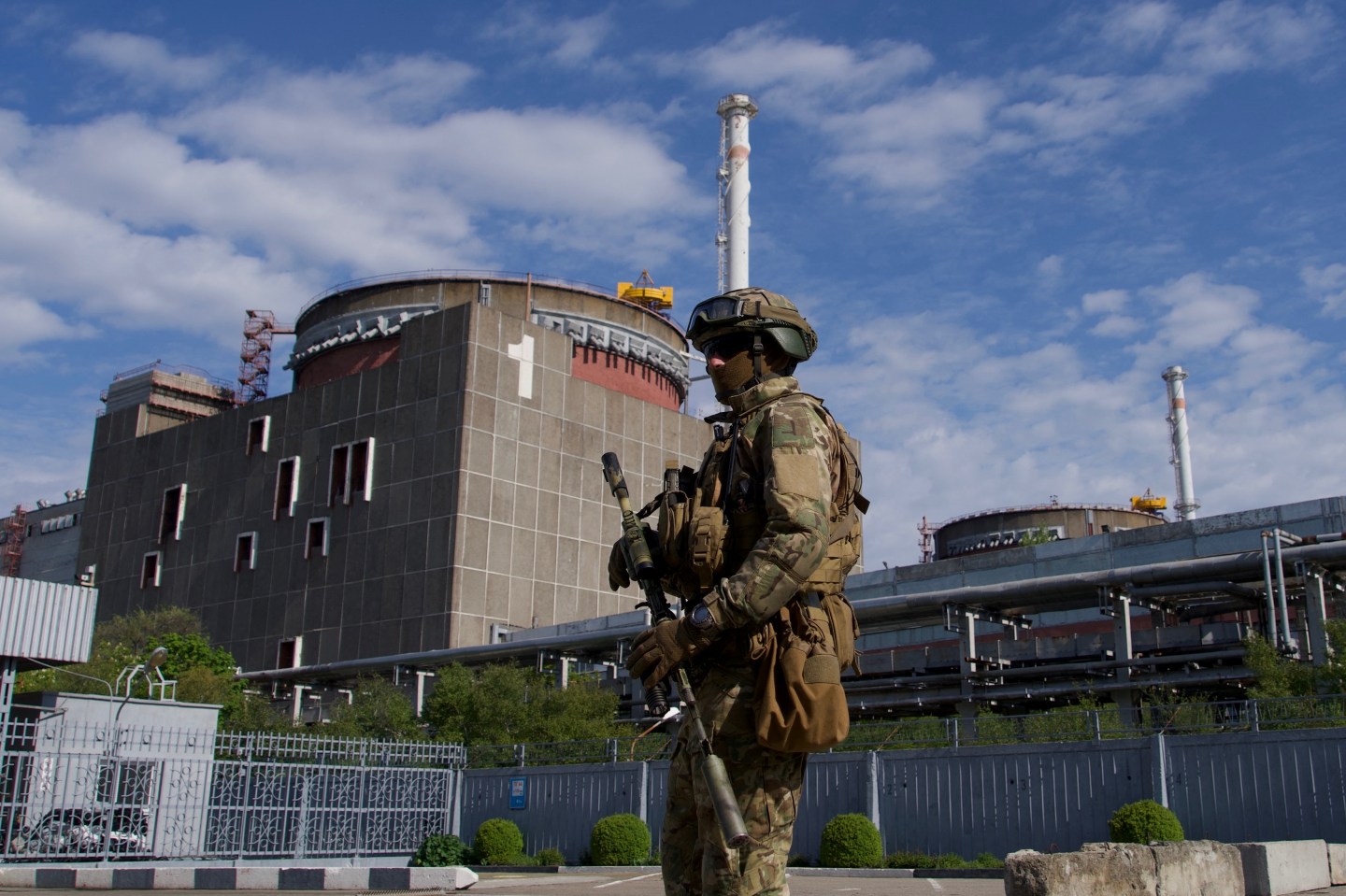 A Russian soldier patrols the Zaporizhzhia nuclear power station in Enerhodar in May. The Ukrainian power plant was seized by Russian forces in early March.
ANDREY BORODULIN—AFP/Getty Images

The risk of nuclear catastrophe in Europe has returned, UN leaders warn, as the Russian army threatens to use Europe’s largest nuclear power plant as a weapon of war and possible bargaining chip for its invasion of Ukraine.

Officials are now warning of a potential major disaster as clashes intensify at the sprawling Zaporizhzhia nuclear power plant, located in the eponymous southeastern Ukrainian province that has been under Russian occupation for months.

Last week, UN nuclear chief Rafael Grossi said that the plant was “completely out of control” and that “every principle of nuclear safety has been violated” amid growing reports of heavy artillery and the unknown safety status of the site’s nuclear material.

The site has been under Russian occupation since March, shortly after the war began. Over the weekend, both Ukrainian and Russian forces accused each other of bombing the plant, putting its stores of volatile and radioactive nuclear material at risk.

On Monday, UN Secretary-General António Guterres called the attacks “suicidal” during a press conference in Japan, where he also reiterated international requests for Russia to allow an independent nuclear safety team to visit the plant and evaluate conditions.

“Any attack to a nuclear plant is a suicidal thing,” he said. “I hope that those attacks will end.”

‘Russian land or a scorched desert’

After videos emerged in early March of fires, explosions, and heavy shelling at Zaporizhzhia shortly after the plant’s occupation, experts warned that it could lead to a nuclear catastrophe.

In April, British Prime Minister Boris Johnson urged Russian President Vladimir Putin to cease the army’s “reckless actions” at the plant, which “could now directly threaten the safety of all of Europe.”

Those fears may start to become reality.

The Russian forces occupying the plant, led by Maj. Gen. Valery Vasiliev, have lined the power plants with mines and explosives, and are prepared to do what is necessary to keep hold of the site, according to a statement by Vasiliev, shared on the messaging app Telegram on Monday by Energatom, Ukraine’s state-run nuclear energy operator.

“As you know, we have planted mines in all the important facilities of the Zaporizhzhia nuclear power plant. And we do not hide this from the enemy. We warned them. The enemy knows that the plant will be either Russian—or no one’s,” the statement read.

“There will be either Russian land or a scorched desert,” Vasiliev wrote. The statement was also cited Monday on Twitter by Ukraine’s StratCom Centre, a source for strategic communications by the Ukrainian government. “Scorched earth” refers to a destructive military strategy used to devastate and destroy anything that might be later useful to an enemy combatant.

Energatom wrote that Ukrainian intelligence confirmed the Zaporizhzhia plant has indeed been laced with mines by Russian troops, and said that the Russian army was prepared to “blackmail the whole world” by threatening the plant’s safety.

Vasiliev warned that his troops—whom he referred to as “liberators”—should be prepared to follow orders to detonate the plant should it be necessary.

“Warriors—liberators should understand that there is no other option. And in case of receiving the most severe order, we must fulfill it with honor,” he wrote.

The Zaporizhzhia nuclear plant is the largest of its kind in Europe, and a detonation at or near the site—whether intentional or accidental—could cause thousands of tons of highly radioactive nuclear fuel to leak out.

The site currently houses 2,204 tons of radioactive spent nuclear fuel, 855 of which are in more vulnerable spent fuel pools, according to a March Greenpeace analysis of risks at the power plant.

But even spent nuclear fuel has a lot of pent-up energy. Without a constant flow of coolant to keep it from overheating, the radioactive material could evaporate and burn away its casing, releasing its toxic particles into the atmosphere. Greenpeace analysts warned this could happen at Zaporizhzhia, as the war is threatening to disrupt electrical supply to the plant, which is needed to power the systems that cool down the spent fuel.

“There is a unique nuclear threat,” Jan Vande Putte, coauthor of the analysis and nuclear analyst with Greenpeace, said of the risks at Zaporizhzhia in a March statement. “For the first time in history a major war is being waged in a country with multiple nuclear reactors and thousands of tons of highly radioactive spent fuel.”

With a war raging outside its walls, experts have warned about the possibility of electrical supply being cut off, which would make coolant systems at the plant inoperable. On Monday, the Russian Ministry of Defense said that it had to reduce the plant’s output because of shelling sustained over the weekend on high-voltage power lines surrounding the site.

Russia reportedly told diplomats on Monday that it would welcome international nuclear monitors to assess the safety of the plant, although the UN’s Grossi has said that going there remains “very complex” and will require permission from the Ukrainian government and safe passage through the war zone surrounding the plant.

Ukrainian officials suggested on Monday turning the area around the plant into a demilitarized zone to assist in these efforts, although this would require Russian troops to leave the site.