The EU is calling natural gas ‘green,’ but critics aren’t buying it 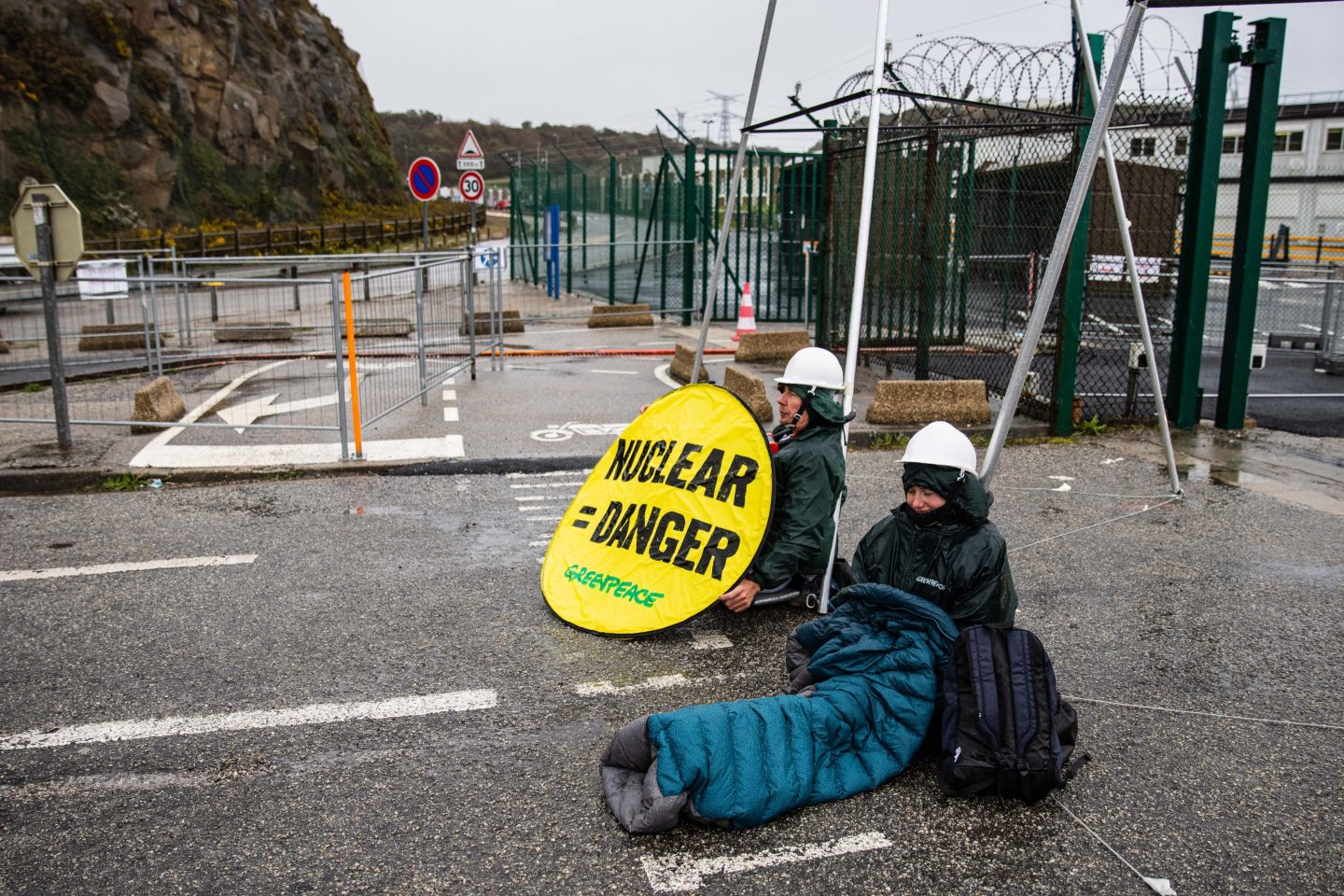 Greenpeace activists block the entrance to the Flamanville nuclear power plant in Normandy, France, to protest against pro-nuclear presidential candidates on March 31, 2022, ahead of the French presidential election of April 10.
Sameer Al-Doumy—AFP/Getty Images

The European Commission is facing backlash for its decision last month to classify some natural gas and nuclear energy projects as “green,” even though those energy sources produce CO2, methane, and toxic waste. The policy comes as Europe seeks to expedite progress on its climate goals and reduce reliance on Russian fossil fuels.

The move will allow natural gas and nuclear projects to obtain a “sustainable” label within a classification system designed to help financial markets define green investment. Critics include European Union governments, environmental activists, and green investors who say the move could divert money away from renewables. It could also encourage other nations to follow suit, undermining global efforts to reduce dependency on fossil fuels.

Proponents say the opposite is true: that natural gas and nuclear power can help transition Europe away from dirtier energy sources such as oil and coal while adding to the energy supply at a crucial moment.

The policy comes with conditions. To be “transitionally sustainable,” natural gas plants must limit their greenhouse gas emissions. Nuclear power can be classified as a sustainable economic activity as long as countries dispose of toxic waste effectively and prevent environmental damage. Nuclear power plants can be considered sustainable if the construction permit is issued before 2045.

“The Commission gave in to massive, massive pressure from a wide group of member states,” said Martin Hojsík, a Slovakian liberal member of the European Parliament. The big winners from the decision are Germany, which still relies on gas for 27% of its overall energy mix, and France, which relies on nuclear energy for around 70% of its energy needs.

EU member states Luxembourg and Austria and NGOs including Greenpeace have said they will take the EU to court over the decision because it contradicts preexisting EU legislation and undermines the EU’s progress to meet climate goals. The European Climate Law outlines targets to cut emissions 55% by 2030 and achieve climate neutrality by 2050.

Others say the policy is a necessary interim step in the bloc’s transition to renewables.

“Even if we were to set aside the events of the last four or five months with Russia and the Ukraine, it would have been extremely difficult to get agreement to completely rule out funding for nuclear and natural gas,” said Jonathan Stern, distinguished research fellow at the Oxford Institute for Energy Studies. “For many countries, gas is going to be crucial for a period of time, because of the phasing out of coal.”

Falling back on fossil fuels

The decision comes as Europe is attempting to wean itself off Russian fossil fuels under its REPowerEU plan. Russia has throttled the amount of gas it provides Europe as a form of leverage in the dispute over Ukraine, sparking an energy crisis that has seen the EU backsliding on fossil fuel use. Germany, Austria, and the Netherlands have fallen back on coal-fired power amid energy pressures.

Critics say the new policy only further undermines the EU’s claims to global climate leadership. African countries have lambasted the EU for hypocrisy over its attempts to discourage investment in gas in developing countries while continuing to rely on the fossil fuel itself.

Stern encountered a similar outcry at the World Gas Conference in May. Although developing countries are concerned about climate change, he said, they are also “concerned about having enough energy to provide themselves with a way of industrializing and developing.”

There are also fears about whether other countries might copy the EU’s taxonomy decision, potentially influencing global climate targets. In late 2021, South Korea classified liquefied natural gas as transitionally sustainable, relying on arguments similar to those of the EU. The U.K.’s talks on its taxonomy have been paused for several months, and there are concerns it may follow suit.

Conversely, a number of countries have excluded natural gas and nuclear from their taxonomies, including Bangladesh, China, and Russia.

Hojsík says it’s “very possible” the European Court of Justice will strike the taxonomy down in its current form. If not, the financial sector may reject it anyway. The Institutional Investors Group on Climate Change, whose members control more than $52 trillion in assets, has complained about the decision creating confusion for green-minded investors. In 2021, Werner Hoyer, president of the European Investment Bank, stated plainly that “gas is over.”

Despite the current turmoil Russia’s Ukraine invasion has unleashed, some are hopeful the situation will eventually expedite the EU’s shift to renewables—as set out in the REPowerEU plan.

“In light of the situation in Ukraine, it’s clear that very quickly we need a lot of investment in renewables, energy efficiency, and electrification to be able to solve this,” Kuzmanova said.