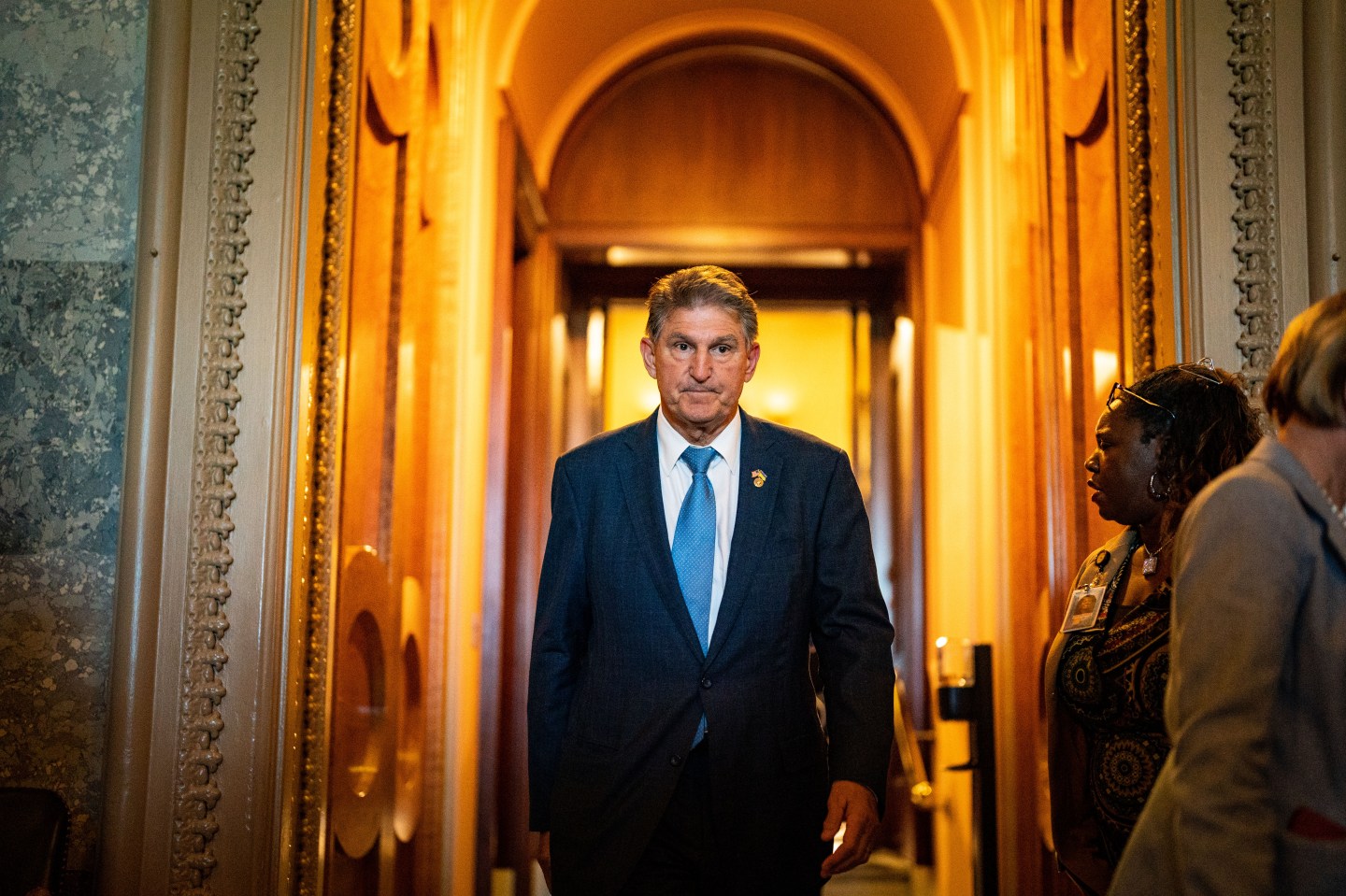 Sen. Joe Manchin (D-W.V.) departs from the Senate side of the U.S. Capitol Building after a series of amendment votes, also called "vote-a-rama, on the Inflation Reduction Act on Aug. 7, 2022 in Washington, DC.
Kent Nishimura— Los Angeles Times/Getty Images

President Joe Biden and Senate Majority Leader Chuck Schumer are the biggest winners now that a huge piece of Democrats’ economic agenda is hurtling toward enactment.

The tax and energy bill passed Sunday after a year and half of rocky negotiations that divided the party. It gives Democrats tangible progress on key issues to show voters in the midterm elections this November.

Biden’s popularity nose-dived a year ago in the wake of the haphazard Afghanistan pullout and rising inflation — and a year of infighting among Democrats over the domestic agenda. That squabbling is in the past and Biden can say a cornerstone of his agenda will become law.

Schumer was slammed last year for failing to unite his caucus behind Biden’s Build Back Better plan. He managed to revive a slimmed version of the deal, navigate last-minute holdups and blindside Republicans hours after they gave up leverage by allowing a bipartisan semiconductor bill to pass.

Here’s who else comes out on top and who takes a hit from the landmark bill:

None of the billions of dollars in tax increases Democrats floated a year ago on high-earning Americans made it into the final version of the bill, including proposals to double the capital gains rate, increase taxes on inheritances and levy a surcharge on millionaires. Despite rhetoric from Democrats that they wanted the richest Americans to pay much more, there wasn’t consensus within the party to pass a bill that raises levies on the 1%.

Private equity fund managers were able to dodge a tax increase that Senator Joe Manchin wanted, but fellow moderate Democrat Senator Kyrsten Sinema insisted be taken out of the bill. Manchin had wanted to narrow a tax break known as carried interest, that allows fund managers to pay lower capital gains rates on their earnings.  The private equity industry was able to gain an additional win shortly before the final passage of the bill when a handful of Democrats broke with their party to vote on a Republican amendment that created a carveout for private equity-owned companies in the corporate minimum tax.

The entire contents of the bill were essentially cherry-picked by Manchin and then tweaked to fit Sinema’s preferences. The two moderates amassed huge leverage with their willingness to accept no bill at all — and attacks from progressives — rather than a bill with provisions they opposed. The pair were also able to score some direct benefits for their states as part of the negotiations: Manchin secured an agreement to permit the completion of the Equitrans Midstream Corp.’s Mountain Valley Pipeline, and Sinema was able to get $4 billion for drought relief in western states.

The deal extends a popular $7,500 per vehicle consumer tax credit for the purchase of electric vehicles, a win for EV makers like General Motors Co., Tesla Inc. and Toyota Motor Co. But to win the backing of Manchin, companies will have to comply with tough new battery and critical minerals sourcing requirements that could render the credits useless for years for many manufacturers. Not all manufacturers stand to benefit from the credit. New cars that cost more than $55,000 and $80,000 for pickups and SUVs won’t qualify for the credits.

Oil and gas got a boost alongside newer energy sources. The bill, which could mandate more federal oil and gas lease sales and boosts an existing tax credit for carbon capture, won praise from companies such as Exxon Mobil Corp. and Occidental Petroleum Corp. The legislation creates a new 10-year product tax credit for hydrogen production that rises to as much as $3 per kilogram depending on carbon intensity.

The final bill caps out-of-pocket costs for seniors’ prescription drugs at $2,000 a year and allows Medicare to negotiate the prices on 10 medications four years from now. The bill avoids a large January increase in Obamacare premiums for many middle income people by extending subsidies for three years.

Manchin negotiated $300 billion in deficit reduction into the bill, the first major effort by Congress in 11 years to reduce the difference between how much the country spends versus how much tax revenue it takes in. The deficit cuts are minor compared to the $24 trillion national debt but hawks say it’s a start.

The Internal Revenue Service will get an influx of $80 billion over the next decade to expand its audit capability and upgrade technology systems after years of being underfunded.

The GOP was confident they had beaten back Biden’s tax and climate agenda and were stunned in late July when Schumer and Manchin announced a deal. While still the favorites to gain seats in the midterm elections, passage of the bill is a major setback for the GOP’s policy aims. It does, however, give them a new issue to campaign on in the fall campaigns.

The bill allows Medicare for the first time to negotiate with pharmaceutical companies on drug prices, a change that Congress has been discussing for decades with limited success, in part because of the drug lobby’s power. The pharmaceutical industry was able to score a partial victory after the Senate parliamentarian blocked a portion of the bill that would have capped price increases for drugs in the commercial market. Drug-makers will likely offset some of their reduced revenue from Medicare negotiations with higher prices for patients with private insurance.

Technology companies are set to bear the brunt of the two major tax increases in the proposal — a 15% minimum tax on financial statement profits and a new levy on stock buybacks. Corporations like Alphabet Inc.’s Google and Meta Inc.’s Facebook have both been able to deftly use the tax code to cut down on the taxes they owe, while still being profitable. The minimum tax is designed to increase levies on companies that report large profits to shareholders, but can claim many deductions and credits to cut their IRS bills.

The legislation does not include an expansion of the $10,000 cap on the state and local tax deduction, or SALT. The omission is a blow to residents of high-tax states in the Northeast and West Coast, and Representatives Josh Gottheimer of New Jersey and Tom Suozzi of New York, who led the effort to increase the size of the write-off.

The $437 billion in spending is a far cry from the $6 trillion that progressives, led by Senator Bernie Sanders, envisioned at the start of Biden’s presidency. The bill excludes all proposals for new social programs, including child care, tuition-free college, housing spending and an expanded-child monthly child tax credit.