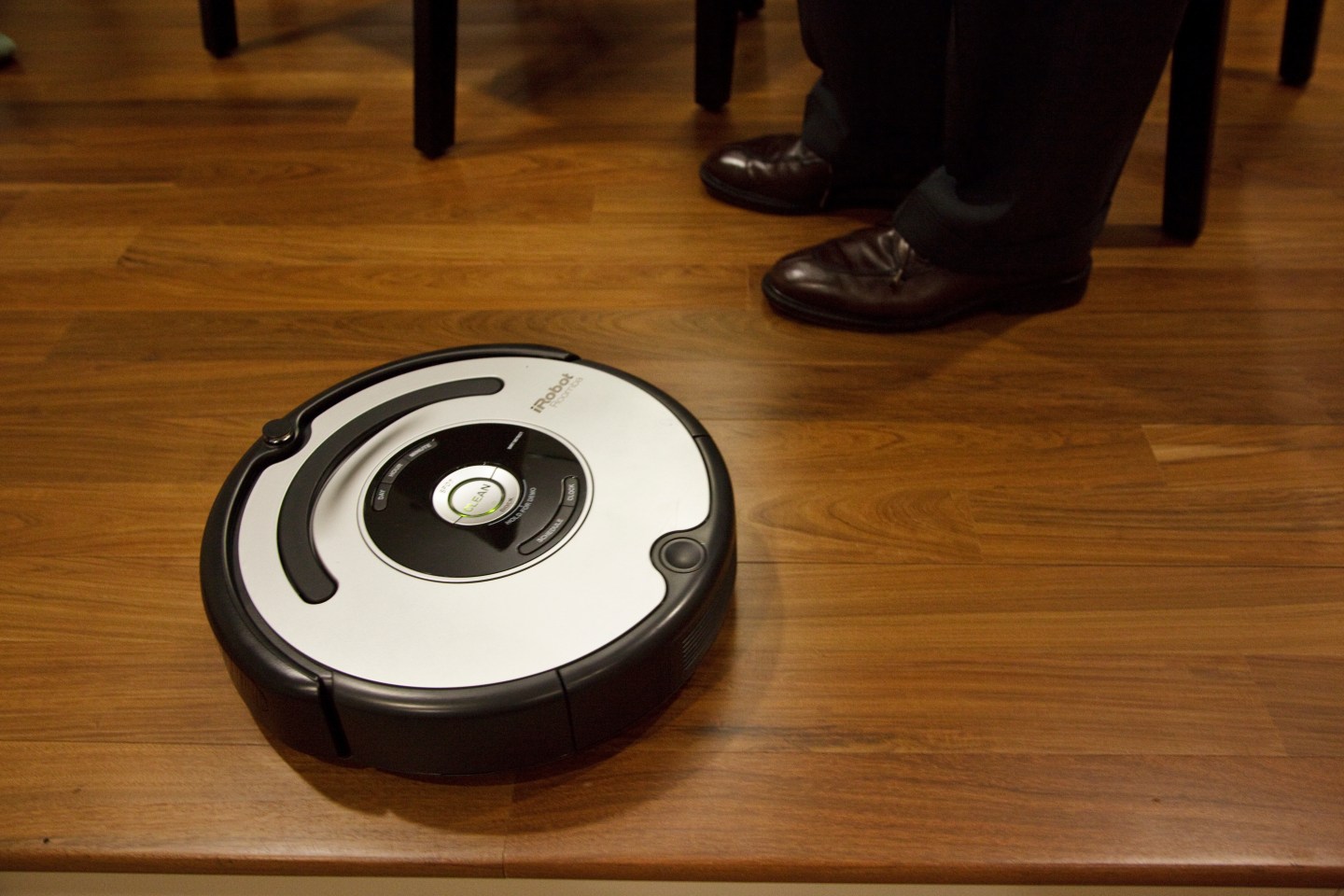 Amazon’s surprising announcement of plans to acquire Roomba maker iRobot for $1.7 billion elicited two primary complaints from Big Tech critics over the past few days—one that merits close consideration, and one that strains credulity.

Let’s start with the more valid argument: It’s an antitrust violation (or at least should be).

The world’s second-largest company by revenue has made no bones about its desire to infiltrate your house, filling it with a constellation of interconnected, Amazon-owned smart devices. Amazon dominates the U.S. smart speaker market with Alexa, and it sells more video doorbells than any company in the world through the Ring brand. A third product, the do-it-all household robot Astro, arrived on the market earlier this year, though early reviews have been underwhelming.

The Roomba purchase marks a natural extension of these ambitions. Massachusetts-based iRobot owns an estimated 75% of the U.S. smart vacuum market, with no imminent competitor on track to topple the leader. In addition, Amazon and iRobot have already worked together to integrate their respective Alexa and Roomba products, allowing owners to start their vacuum with a voice command. (Google and Apple devices offer the same feature.)

Given Amazon’s enormous reach across e-commerce, cloud services, advertising, and home products, any billion-dollar acquisition naturally draws howls from antitrust advocates. In theory, Amazon could use the iRobot deal to further squeeze out Google and other smart home device competitors.

It’s a fair enough claim, albeit one that could collide with the realities of current antitrust law.

To stop the merger, the Federal Trade Commission likely would have to argue that the acquisition might “substantially” lessen competition in the smart vacuum space, a difficult case to make at the moment.

It’s hard to argue that the deal would eliminate a competitor for Amazon, given that the tech behemoth doesn’t currently manufacture a smart vacuum. While the Astro shares some rudimentary traits with the Roomba—namely, that it moves autonomously on the ground—it’s conspicuously missing a vacuum. The FTC could classify the Roomba more broadly as a smart home device, rather than just a smart vacuum, but that feels like a stretch.

The better argument is that Amazon will undercut smart vacuum competitors by using its vast wealth to subsidize selling Roombas at a discount. Those fears, however, haven’t been grounds for stopping Big Tech mergers in recent years. And while FTC Chair Lina Khan has promised more aggressive action against companies like Amazon, the courts ultimately will decide that fate.

Another assertion goes that Amazon could, in theory, use the Roomba as leverage for extracting concessions from rival smart vacuum makers, such as providing more product data or spending more on e-commerce advertising. But Amazon knows that any such move, at least in the short term, would surely endanger the deal. Amazon also has earned some brownie points on this front via its support of Matter, a smart home interoperability standard designed to allow products from rival companies (including Apple and Google) to connect with one another.

Now on to the more risible argument: that Amazon’s acquisition represents a major invasion of consumer privacy.

The objection, which gained traction following a viral Twitter thread Friday from Institute for Local Self-Reliance senior researcher and writer Ron Knox, stems from Roomba’s ability to map out customers’ home floor plans and theoretically transfer that data back to Amazon corporate offices.

The thinking goes that Amazon might be able to suss out your income based on your house size, or your family status based on the presence of toys left on the floor by kids, or your need for furniture based on a lack of obstacles. In turn, Amazon could more directly target you with ads.

Perhaps that’s marginally the case, but it ignores the numerous other, more useful data sets available to Amazon (not to mention the tech industry’s other more invasive practices). Want to know a customer’s house size? Link their address to public property records, which contain square footage and appraisal value data. Want to know if buyers have munchkins running amok? Online purchase histories should offer a clearer, earlier answer.

And if consumers and policymakers are truly terrified of Big Brother Roomba, they have options. Customers can start by buying a (gasp!) handheld vacuum. Congress, meanwhile, can finally pass meaningful antitrust and data privacy legislation that’s been languishing for years.

Amazon certainly hasn’t done much of anything over the past two decades to earn our trust on the competition and privacy fronts. But under the current rules of the game, Amazon looks poised to win yet again.

Do you have to tip? Two local governments in China issued the republic’s first permits for driverless taxis, allowing search engine giant Baidu to operate services within limited spaces in their cities, the Wall Street Journal reported Monday. The decisions illustrate China’s ambition to compete with the U.S. on the autonomous vehicle front, with both nations still in the early stages of establishing regulatory frameworks for unmanned vehicles. Baidu plans to run five driverless taxis each in Wuhan and Chongqing, China’s seventh- and 13th-largest cities, respectively,

A hard fall. Investment giant SoftBank posted $21.7 billion in losses during the past quarter from its tech-centric Vision Fund, the unit’s second-largest quarterly loss on record, CNBC reported Monday. The slump stemmed from Vision Fund’s investment primarily in high-growth tech stocks, which boomed in the past few years before cratering in the first two quarters of 2022 as investors sought safer ground. SoftBank founder Masayoshi Son pledged in May to switch to “defense” mode and invest more conservatively in response to market conditions.

Back for more. Chip designer Qualcomm and semiconductor manufacturer GlobalFoundries sealed an agreement Monday to more than double the amount of chips created through their existing partnership, Reuters reported. The pair’s current deal extends to Qualcomm’s chips for 5G transceivers, Wi-Fi products, automotive parts, and other electronics. GlobalFoundries is expected to fabricate the semiconductors at its plant in New York, as well as facilities in Germany, France, and Singapore.

Bringing the thunder. The Treasury Department on Monday barred Americans from using the crypto-mixing service Tornado Cash, citing its use by cybercriminals looking to launder stolen money, CoinDesk reported. Blockchain analysts have said that hackers tied to the $625 million theft from the Axie Infinity Ronin network earlier this year have used Tornado Cash to launder their proceeds. Americans who violate the sanction could face criminal charges.

Sticking to its core. While Microsoft is lavishing $68.7 billion on Activision Blizzard and Amazon is shelling out billions for health care and smart vacuum companies, Apple is quietly sitting on the M&A sidelines. A Bloomberg report Monday takes note of Apple’s acquisition slowdown since the beginning of 2021, with the iPhone maker spending just $202 million during that time. While Apple isn’t known for making splashy deals relative to its Big Tech rivals, the pace of purchasing is well below the company’s history over the past decade.

That deal flow has slowed to a trickle. Apple only made two known acquisitions in 2022: the UK-based startups Credit Kudos and AI Music. The first of those two companies developed technology for calculating credit scores, which will likely aid Apple’s efforts to build its own infrastructure for financial products. The latter business used artificial intelligence to generate tailor-made music.

Apple’s only known takeover in 2021 was the purchase of Primephonic, a classical-music streaming service.

Sheryl Sandberg is officially done as Meta COO. What really changed for top-ranking women during her tenure?, by Maria Aspan

Nancy Pelosi’s Taiwan trip has intensified the U.S. and China’s chips showdown. Now the world’s chipmakers may be forced to pick a side, by Yvonne Lau

After crypto’s crash and NFTs’ collapse, Web3 idealists race to prove that the dream of decentralization isn’t dead, by David Meyer

Vitalik Buterin not worried about Ethereum fork, says most proponents ‘want to make a quick buck,’ by Taylor Locke

Not much nice to say. Meta’s BlenderBot 3 isn’t quite ready for prime time. The Facebook parent’s latest A.I. chatbot, launched to the public late last week, spewed all kinds of offensive and troubling content when queried by inquisitive reporters over the weekend, suggesting the machine learning technology still has a ways to go. BlenderBot displayed some blatant anti-Semitic tendencies, while also parroting the rhetoric of 2020 election deniers. At different points, BlenderBot also claimed to be Christian and asked for off-color jokes. Meta officials said the chatbot “can still make rude or offensive comments, which is why we are collecting feedback that will help make future chatbots better.” Let’s hope so.