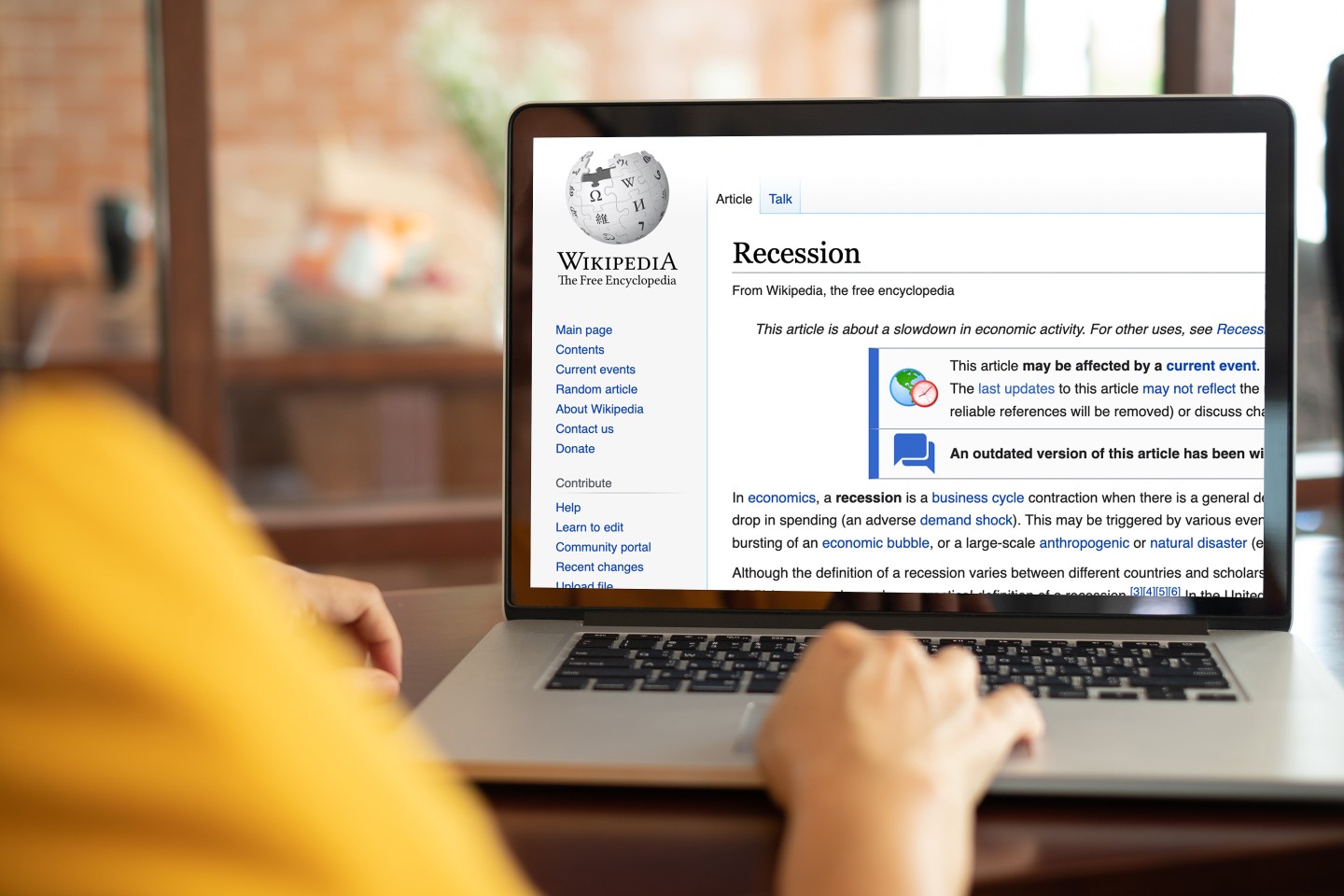 It seems that no one can agree on the definition of a recession, let alone if we’re in one right now.

Some define it as two consecutive quarters of negative GDP growth, no matter what other indicators—like a strong labor market—say about the economy.

But others believe that it’s not officially a recession until the non-profit National Bureau of Economic Research says it is. The NBER defines a recession as “a significant decline in economic activity that is spread across the economy and lasts more than a few months.” They often wait long after a recession has begun to make their final call.

So it should come as no surprise that the recession debate raging around the country has spilled over into a fierce editing war over the Wikipedia page for “recession,” prompting the organization to stop new users, or anyone without an account, from making whatever edits they please.

Users have edited the page more than 180 times this week, according to its history. Before this week, the page saw just 24 revisions in 2022.

A lock icon now appears over the edit button, indicating that it is “protected to prevent vandalism.”

But on Wednesday, a Wikipedia site administrator named Anarchyte moved the recession page into semi-protected status. New users have to wait four days and make 10 edits on other pages before they can change any wording on the recession article, according to Wikipedia policy. When the pause lifts on Aug. 3, they can make edits again, but those will be reviewed by volunteer editors.

Anarchyte updated the site history, saying the page was about a “currently contentious” topic and had experienced “persistent addition of unsourced or poorly sourced content.”

The top of the recession page now warns that further updates without valid and reliable references will get removed and reads: “This article may be affected by a current event. Information in this article may change rapidly as the event progresses.”

The change even appeared to catch the attention of Elon Musk, who tagged Wikipedia co-founder Jimmy Wales in a tweet, writing: “Wikipedia is losing its objectivity.”

The Wikimedia Foundation, a nonprofit that operates Wikipedia, told Fortune that volunteer editors—rather than any central body—control site content “using established policies around neutrality, reliable sourcing, and notability, among others, as the basis for those decisions.”

“It’s not uncommon for topics in the news to receive sudden interest on Wikipedia. Volunteer editors know this, and have created tools and mechanisms for responding to an influx of edits on articles that are in the public eye,” a spokesperson for the foundation said. “Protecting an article is one common tool they use.”

Wikipedia’s history of the page shows that most edits have gone back and forth about how to define a recession.

One user added the line: “There is no global consensus on the definition of a recession,” which someone else later removed for seeming “too vague.” Other edits disagreed on whether to place a popular definition for a recession—two consecutive quarters of negative GDP growth—higher in the article or further down.

On social media, people accused the recession Wikipedia page of trying to erase that popular definition to align itself with President Biden. On Thursday, after GDP data was released, Biden rejected the idea that the U.S. is in a recession, and instead touted continued job growth, low unemployment and growing investment from manufacturers. “That doesn’t sound like a recession to me,” he said.

Although the actual recession Wikipedia page has been partially locked, editors have created a separate recession talk page for users to discuss improvements. One volunteer editor who works under the user name JPxG addressed the censorship concerns in an FAQ on the forum.

The editor discredited rumors that Wikipedia had removed mention of two quarters of negative GDP growth from its recession definition and said any screenshots implying so are outdated. He added that the article has included that part of the definition since 2011.

“As far as I can tell, nobody ever messed with this,” JPxG said. “Right now, the article gives both that definition and the NBER definition, and takes no position on which is ‘correct.’”