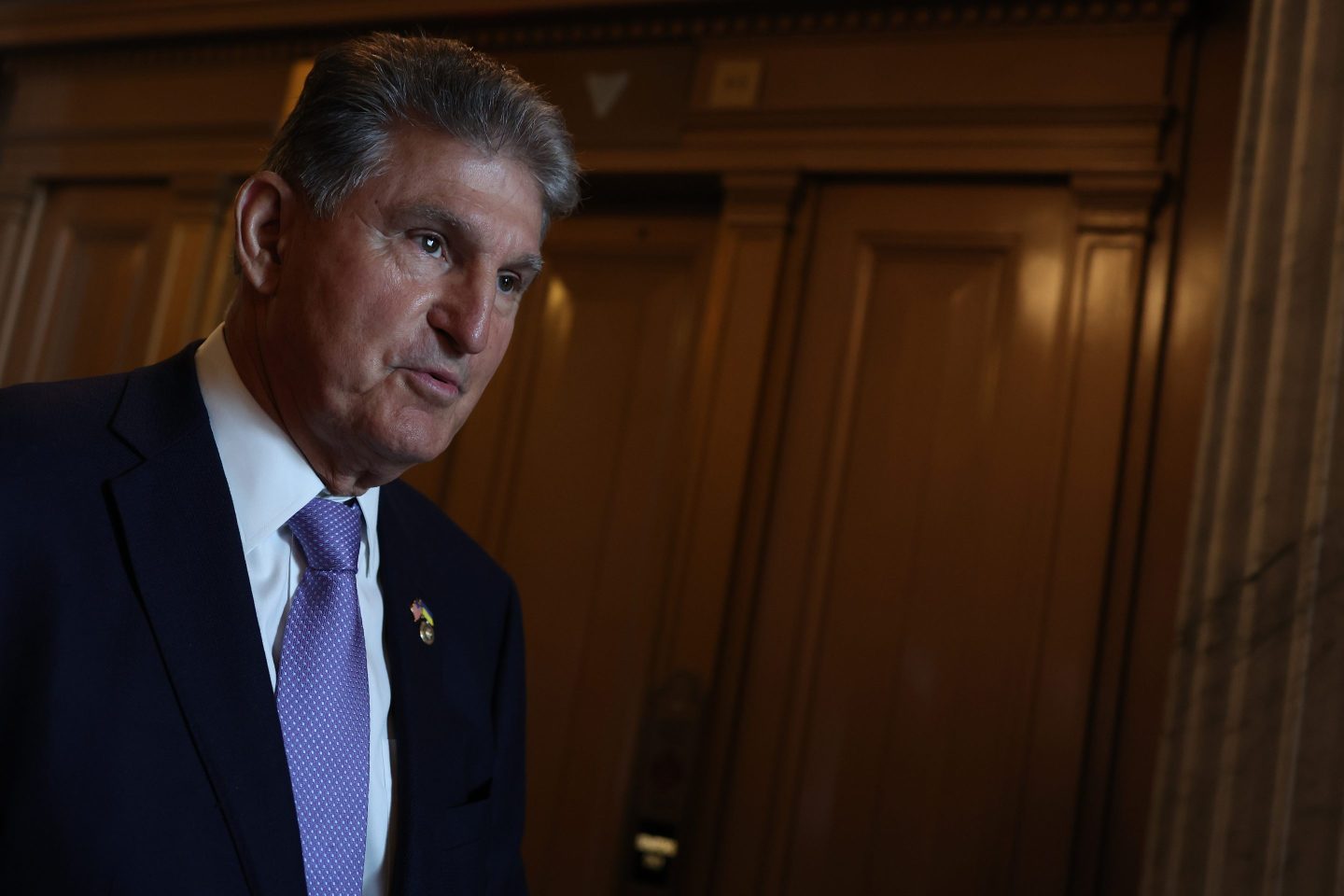 Sen. Joe Manchin (D-WV) walks out of the Senate Chambers in the U.S. Capitol on July 21, 2022 in Washington, DC.
Anna Moneymaker—Getty Images

For months, Biden administration officials and chipmaking CEOs have been lobbying Congress to approve the CHIPS Act, which would give billions of dollars to the semiconductor industry, before the August congressional recess. The act finally advanced on Wednesday when the U.S. Senate passed what’s now named the Chips and Science Act that includes $52 billion in subsidies for chipmakers building new foundries in the U.S. and $170 billion in incentives for scientific research and development to bolster the U.S.’s ability to compete with China.

The Chips Act looked likely to easily pass the U.S. House of Representatives, where it’s heading next, until Congressional Democrats threw a curveball. Shortly after the Senate passed the Chips Act on Wednesday, Senator Joe Manchin (D-W.Va.) revealed his support for a separate spending package that revives elements of President Biden’s Build Back Better agenda. Senate Republicans had only voted on the Chips Act because the comprehensive spending package seemed dead without Machin’s support. Now, some Republicans say they feel duped, and Republican leadership may urge House Republicans to vote against the Chips Act to retaliate, leaving fewer votes on offer for U.S. Speaker of the House Nancy Pelosi and the narrow Democratic majority to pass the long-awaited semiconductor subsidies.

What’s in the Chips and Science Act

Chipmakers and Biden officials had lobbied hard for the funding to be approved before Congress goes on recess on Aug. 8. Semiconductor manufacturers like Intel Corporation, Taiwan Semiconductor Manufacturing Corporation, and GlobalWafers have pledged billions of dollars in U.S.-based projects but say the investments are contingent on getting U.S. government money.

“Congratulations to the U.S. Senate on its vote to fund the #CHIPSAct and advance American leadership in semiconductor manufacturing and R&D,” Intel CEO Pat Gelsinger said on Twitter on Wednesday after the Senate vote. Semiconductor shares jumped after the vote, with the Philadelphia Semiconductor Index up by 4.8% on Thursday.

U.S. Senate Minority Leader Mitch McConnell voted in favor of the bill, along with 16 other Republican senators. Republicans who voted against the Chips Act had earlier criticized it as violating free-market principles or not doing enough to bar funding recipients from investing in China. Sen. Bernie Sanders (I-Vt.), who had earlier decried the money as a “blank check” to already-profitable companies, also voted against the bill.

“We have some important Republican support on the House side,” U.S. Speaker of the House Nancy Pelosi said on Friday at a roundtable dedicated to semiconductors. “They understand the national security aspects,” she said, predicting that a vote for the bill would be bipartisan.

Could the House vote against the bill?

But the bombshell announcement on Wednesday by Manchin may complicate the Chips Act’s path to becoming law. After months of negotiations, Manchin and Senate Majority Leader Chuck Schumer revealed that they had agreed to the separate spending package that includes measures on health care, climate change provisions, and corporate tax increases. The package, titled the Inflation Reduction Act, is a significantly slimmed down version of President Joe Biden’s Build Back Better agenda.

Senate Republicans had tied the fate of the Chips Act to the spending package, which could only pass through the Senate’s reconciliation process with just Democratic votes. On July 1, McConnell said there would be no Republican votes for any Senate effort towards chips or other innovation-related measures “so long as Democrats are pursuing a partisan reconciliation bill.” Republicans relented after Manchin said on July 15 that he did not support fellow Democrats’ effort to increase taxes or pass new climate measures as part of the budget package.

That may limit the number of Republicans willing to vote for the Chips Act—and the number of Democrats who could vote against the bill and still have it pass. U.S. Commerce Secretary Gina Raimondo will meet the Congressional Progressive Caucus on Thursday in an effort to convince undecided Democratic lawmakers to support the measure.

The last time the House passed Chips Act funding, the vote was held almost entirely on party lines. In February, the House passed the America Competes Act, which included several provisions that were not included in the Senate bill, with 222 yay votes, and 210 nay votes. Only one Republican, Rep. Adam Kinzinger of Illinois, voted for the bill at the time.

The House may vote on the Chips Act as early as Thursday. If it passes the House, it will then be submitted to the White House for signing.