A broken global economy is jacking up prices around the world. Experts say we’ve seen this before: World War I 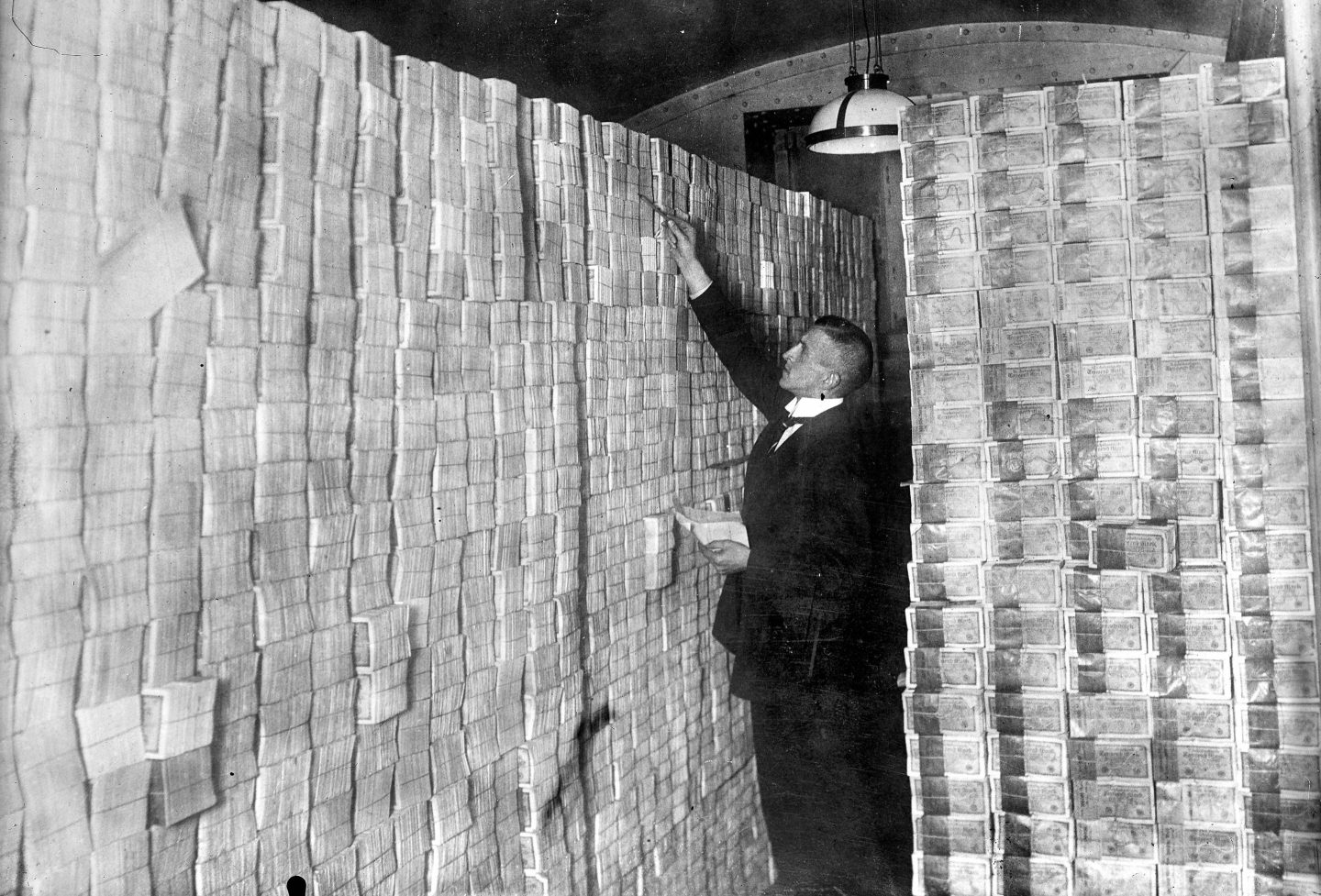 Basement of a bank full of banknotes, at the time of the Mark devaluation, during the economic crisis, Weimar Republic, Germany, 1923.
Harlingue—Roger Viollet/Getty Images

The end of an era is sometimes obvious, but not always.

Over 100 years ago, as the world took up arms in what was then called “the Great War,” it was clear that something had changed. Beyond the cataclysm of the birth of modern warfare, major economies had their first brush with hyperinflation and the economic chaos that ensued.

Now, some of the brightest minds on Wall Street say 2022 could be a similar kind of turning point.

“The world is at a great risk of dividing into economic spheres,” Marcus Brauchli, a managing partner at North Base Media, told the audience at this week’s Fortune Brainstorm Tech conference in Aspen, Colo.

The Russia-Ukraine war, U.S. tensions with China, and the ongoing chaos of Brexit are all signs that an era of deglobalization has arrived, bringing long-term inflation along with it.

Larry Fink thinks so, and that’s significant. Fink is CEO of the world’s largest asset manager, BlackRock, and has been dubbed one of Wall Street’s “new bunch of emperors” by one of the world’s greatest investors, Charlie Munger, the vice chairman of Berkshire Hathaway.

In his closely watched annual shareholder letter in March, Fink wrote that the Russian invasion of Ukraine has “put an end to the globalization we have experienced over the last three decades.”

He argued that companies and governments will be looking to reduce their dependencies on international trade in the coming years, leading many to onshore their operations.

“This decoupling will inevitably create challenges for companies, including higher costs and margin pressures,” he said, adding that there will be an era of increasing inflationary pressures worldwide as global supply chains are remade.

Fink’s argument helps to explain the confusing and often conflicting economic data that keeps coming out.

In June, inflation raged at a four-decade high while the labor market remained tight, as another strong jobs report blew past economists’ expectations. At the same time, corporate profits are falling, and there is evidence global economic growth is slowing.

These economic signposts make sense together if you consider that companies are hiring massively to onshore or reorient for a more deglobalized world, while also incurring higher costs—which they’re passing on to consumers.

Fink is not alone in his view, either. Fortune canvassed Wall Street banks, economic historians, and money managers to see just how much deglobalization the world economy is in for, and what that could mean for inflation. Will we relive the economic cycle of World War I, even if the current conflict stays within Ukraine?

Throughout modern history, globalization has been a deflationary force. Increased trade and migration between nations have acted to reduce labor and materials costs for decades now, leading many critical consumer prices to fall.

Brendan McKenna, an international economist at Wells Fargo, told Fortune that globalization has also increased competition among businesses consistently over the past century, which has helped to reduce inflation.

“One of the benefits of globalization is that it creates competition amongst businesses,” he said. “As corporates compete with each other, they typically set the lowest possible price points which is a deflationary effect. De-globalization can have the opposite effect.”

The “first true wave of globalization” took place from the latter part of the 19th century through the start of World War I in 1914, Carola Frydman, an economist, and professor of finance at Northwestern’s Kellogg School of Management, told Fortune.

This period, also known as the “Belle Epoque,” or “Beautiful Age,” was characterized by increasingly free trade, reduced restrictions on migration, and the free flow of capital, which helped to enable a rapid decrease in global transportation and communication costs.

“During that period of high globalization, what we saw primarily was a narrowing of price and wage differences across areas, but also a period of relatively low inflation,” Frydman said.

When World War I hit in 1914, that all ended, and inflationary pressures rose, with some countries even suffering from hyperinflation, Frydman noted. It wasn’t until the 1970s, when an oil shock caused inflation to rise to unsustainable levels, that another era of globalization took hold.

Former Fed Chair Alan Greenspan admitted in a 2005 speech that this most recent era of globalization that defined the years following the 1970s, helped to reduce inflation worldwide, maybe even more so than central bank policy.

Lori Van Dusen, the founder and CEO of the wealth management firm LVW Advisors, told Fortune that the global economy is going to lose some of the “disinflationary benefit” that was gained over the past few decades from this period of globalization and the formation of global supply chains.

She sees a future where there are “parallel economies” that each have their own technology platforms and supply chains, due to the current state of increased nationalism and onshoring worldwide.

Wells Fargo’s McKenna agrees, noting that we will likely see an era of increased tariffs and protectionism which can lead to a “lack of competition and ultimately higher prices.”

“These forces tend to be inflationary, and if the trend we are seeing now persists, inflation can remain at somewhat elevated levels over the longer term,” he said.

Three scenarios for deglobalization and inflation

But how much will inflation rise due to deglobalization?

In an April 27 research note, Goldman Sachs’ Chief Economist Jan Hatzius broke down three potential deglobalization scenarios, and how they might impact inflation.

In the first scenario, which he called “blanket deglobalization,” Hatzius said that a 25% decline in trade with lower-wage countries around the world, including China, could result in a 2% jump in the core personal consumption expenditures (PCE) index.

PCE is a key inflation gauge used by the Federal Reserve. In May, it rose at a 6.6% annual rate, with core PCE, which excludes volatile food and energy costs, rising 4.7%, Bureau of Labor Statistics data shows.

“We’re probably going to settle out at higher costs, and that will hit profit margins, but it’s not as draconian as what their first scenario is painting,” she said.

Hatzius’ second scenario assumes a 50% decline in trade with China, while trade with other lower-wage countries continues at its current pace. If this happens, Goldman believes core PCE in the U.S. could be lifted by 1.9%.

Finally, Hatzius said a third scenario could take place, where a 50% decline in trade with China is made up for by higher imports from other lower-wage countries. This case could add 0.6% to core PCE.

Van Dusen said that she sees this scenario as the most likely, with core PCE jumping by between 0.5% and 1%, due to the effects of de-globalization. She added that investors should look at what individual companies are doing with their supply chains to get a better idea of the future path of inflation.

The more firms that are forced to remake their supply chains around regional economies, the more inflationary pressures the global economy and the U.S. are likely to experience. To Van Dusen’s point, some companies have already decided to move some of their operations in order to cope with the ongoing deglobalization trend.

In June, Lego said it would invest $1 billion and create 1,760 jobs over 10 years with its new factory in Virginia in order to shorten its supply chains for the key U.S. market.

The Goldman team argued in their research report that reductions in trade with global partners and the fracturing of global supply chains, as evidenced by Lego’s move, will likely continue to cause a period of “slowbalization,” in which the flow of goods, capital, and people across borders slows.

Hatzius and his team wrote that investors should “expect somewhat higher inflation and thus higher nominal interest rates” as a result.

However, they added that reductions in trade with specific partners, including China, are “unlikely to be a huge inflation issue” as long as new trade partners can be added and there is a “gradual transition period” to build new supply chains. Without that transition period, however, the situation could be much worse.

As Stephen Mihm, a professor of history at the University of Georgia, wrote in a Bloomberg op-ed last week:

“Perhaps the recent inflation scare will prove transitory after all. But if the assault on globalization continues, history suggests that the days of stable low prices are likely to become a thing of the past.”