4 vital steps that U.S. CEOs must take in the economic battle with China 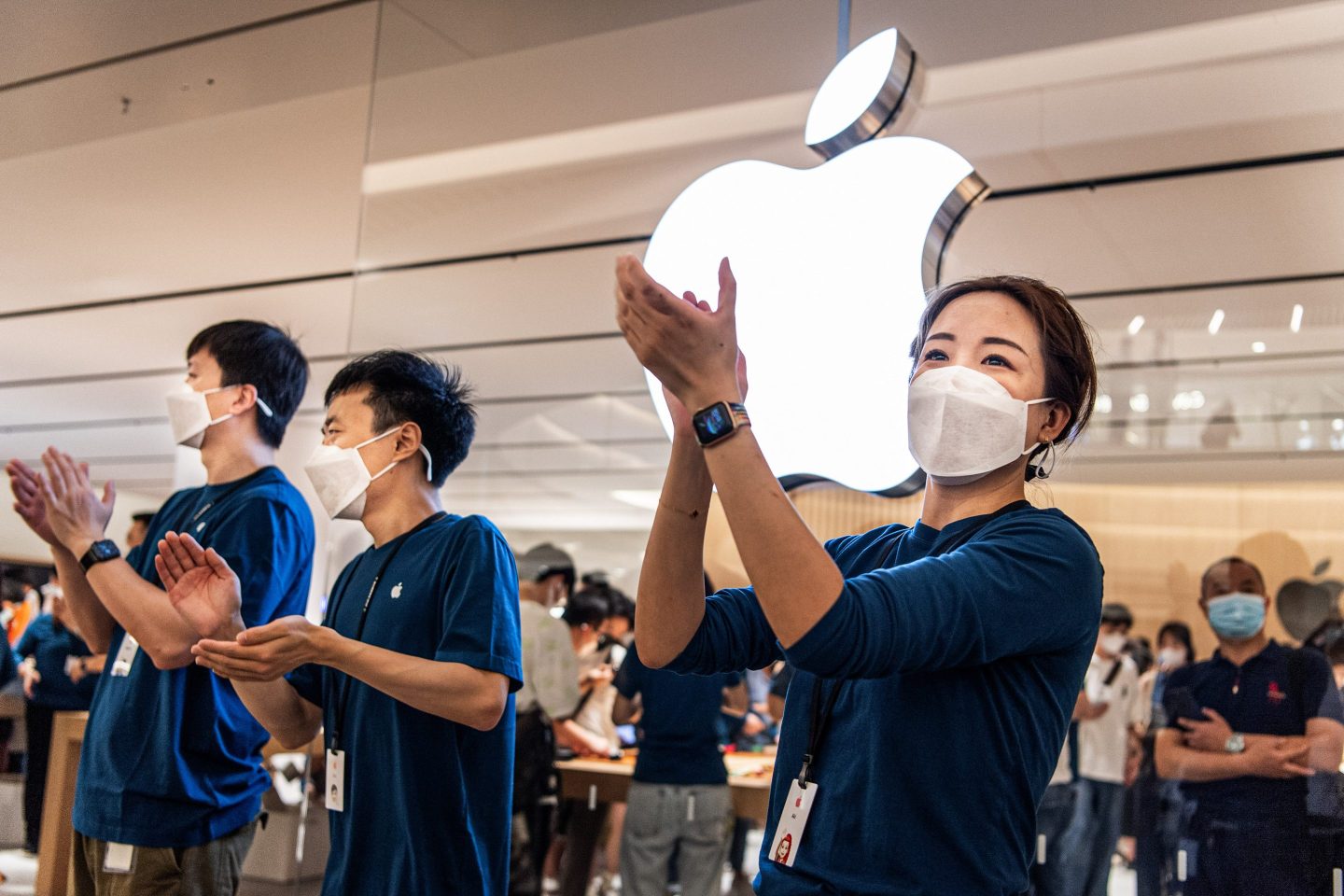 Apple staff welcome customers at the opening of a new store in Wuhan. In reducing its dependence on Chinese suppliers and customers, "Apple is moving ahead of the curve," writes Ram Charan.
(Photo by Ren Yong/SOPA Images/LightRocket via Getty Images)

U.S. companies are in denial about doing business in China.

Business leaders in general are almost certain that China will surpass the U.S. to be No. 1 in GDP at some point in the near future, and they feel compelled to sustain their relationships there. China is already the second- or third-largest market for many American companies, including Apple, Starbucks, and Amway. Texas Instruments and Qualcomm each derived more revenues from China in 2020 than from any other country. Given the size of the opportunity, the CEOs and board members who are in denial tell themselves, their companies can’t afford not to be in China.

But deep down the leaders of these businesses know that China’s relentless drive toward self-sufficiency is likely to someday harm them. An American corporation is needed in China only until a Chinese company has the capability to be its most ardent global competitor. In many cases, sharing technology and intellectual property with a Chinese “partner” under the watch of the Chinese Communist Party is a precondition for a U.S. company’s entry into the market. When the CCP relaxes that requirement, as it has for Tesla, BlackRock, and Goldman Sachs, it is likely only a temporary reprieve.

U.S. corporate leaders have to take off their blinders and face the reality of what is making China more powerful and accelerating its dominance: They are! Efforts to stem the flow of technology and reduce the trade deficit have fallen far short, partly because of fragmentation in policymaking but also because of what corporate leaders continue to do.

There are signs that more business leaders are acknowledging the problem. In a survey of Fortune 500 CEOs, conducted in early May, 61% of those whose companies were involved with the Chinese market said they were looking to reduce their exposure to China.

Still, dealing with reality puts U.S. companies on the horns of a dilemma. If they stop or phase out the flow of technology, know-how, and U.S. dollars, how can they deal with the damage to shareholder value that is almost certain to occur in the short run as they forgo revenue in China?

The time is now for U.S. companies to face up to the problem. Their leaders must be preemptive, and prepare to change their business models or global footprints to counteract any hits they may take from the loss of business in China.

Business leaders should start by taking these urgent steps:

1. Acknowledge the party’s power. Face the reality that participation in China’s growing market is subject to the power of the CCP. The CCP can—and does—change the rules without warning, forcing non-Chinese companies to either leave or see their business reduced to a meaningless volume, as has happened to Ericsson and Nokia. The CCP can also take a range of actions that cause a precipitous drop in a company’s market value, including for Chinese companies with a wide range of Western investors, as happened with the gaming arm of Tencent, Ant at Alibaba, and ride-share company Didi.

CEOs and boards should prepare for this tail risk. Investors will begin to factor that risk into their evaluations. ​

2. Diversify sources of revenue. Openly discuss the revenues and profits from China that are vulnerable; then work on creating a Plan B that reduces your dependency on those revenues. For companies that rely on China for a high percentage of their revenues, the dilemma is where else to find equivalent growth. I know of one large heavy manufacturing company that gets 20% of its revenues from China but is planning to exit over the next several years. My research suggests that this company is well ahead of others.

Have those conversations. Focus on countries whose economies are projected to have sustainable growth, even if they are small. These will be the battlegrounds between you and the competitor you’re creating in China.

Beware of countries that have a record of coming close to debt default and bankruptcy. The Chinese are courting them to get their vote on competitive agenda items like standards setting (for example, for 5G). That creates a competitive impediment for you.

Apple is moving ahead of the curve. Having depended heavily on the Chinese market and supply chain, it is developing both the market and supply chain in India. Its cell phones are in the Indian market at a price point that keeps the iPhone premium but is appropriate for Indian incomes. Apple’s cell phone sales in China peaked at some 71 million in 2015 and declined to just 35 million in 2020.

Along with a few of its ecosystem partners, like Foxconn, Apple has also been building its supply chain in India. Its leaders have discovered that India’s greatest asset is talent, some of which needs to be developed. They are contributing to India’s know-how and providing training. Companies like Apple and Foxconn are getting a tremendous welcome from the Modi government.

3. Bring your supply chain close to the customer. The U.S. can make almost anything it currently imports from China, thereby eliminating dependence on Chinese supply chains. Those supply chains in China were built with know-how from the U.S. and its allies in the first place. Now a wide range of new technologies are available to make supply chains more efficient and more tightly linked to customers than ever.

The movement of supply chains to India will likely accelerate. In the last six weeks, there has been a wave of heads of countries visiting India to discuss building their supply chains there. Japan has made India a strategic country and is one of the largest investors in India, and Dubai’s IHC fund has made a multi-billion-dollar investment agreement with India’s AdaniGroup.

The U.S. will benefit from helping countries to increase the purchasing power of their population and spur their GDP growth. It would be useful for the State Department to publish a list of items the U.S. must build in America to eliminate dependency on China for critical materials, but companies can act on their own.

4. Focus on your true competitive advantage, in your company and industry.  Don’t assume the low price of Chinese goods is a sign of superior competitiveness.  My own experience and research has shown me, repeatedly, that without access to U.S. technology, and after stripping out the effects of managed currency, tariffs, subsidies, and risk insurance, Chinese companies are generally not cost-competitive.  The real cost calculated on the basis of purchasing power parity shows that China is a high-cost producer compared with its U.S. counterparts in many subsectors.

Analyze the real, end-to-end cost from China versus your other supply chain options.  Do data analysis of your industry and make the case to Washington about what needs to be changed in terms of trade policy.  After all, the Chinese have been lobbying Washington to keep U.S. funds and technology flowing; it’s your right and duty to act as a counterweight.

U.S. companies should be confident, keep honing their advantages, and protect their strengths from being conscripted by their rival.

China is deadly serious about its intention to surpass the U.S. and other democratic countries. It has clearly shown its willingness to intertwine economic and political warfare.

CEOs and boards should take the difficult steps needed to help protect not just their own companies’ futures but also democratic principles and free and fair trade. Business leaders have a central role to play to preserve democracy. Let us muster the will and urgency to see the bigger picture and to act.

Ram Charan is an adviser to CEOs and boards of directors worldwide. He has written 33 books and multiple feature and cover articles in Fortune and other publications.