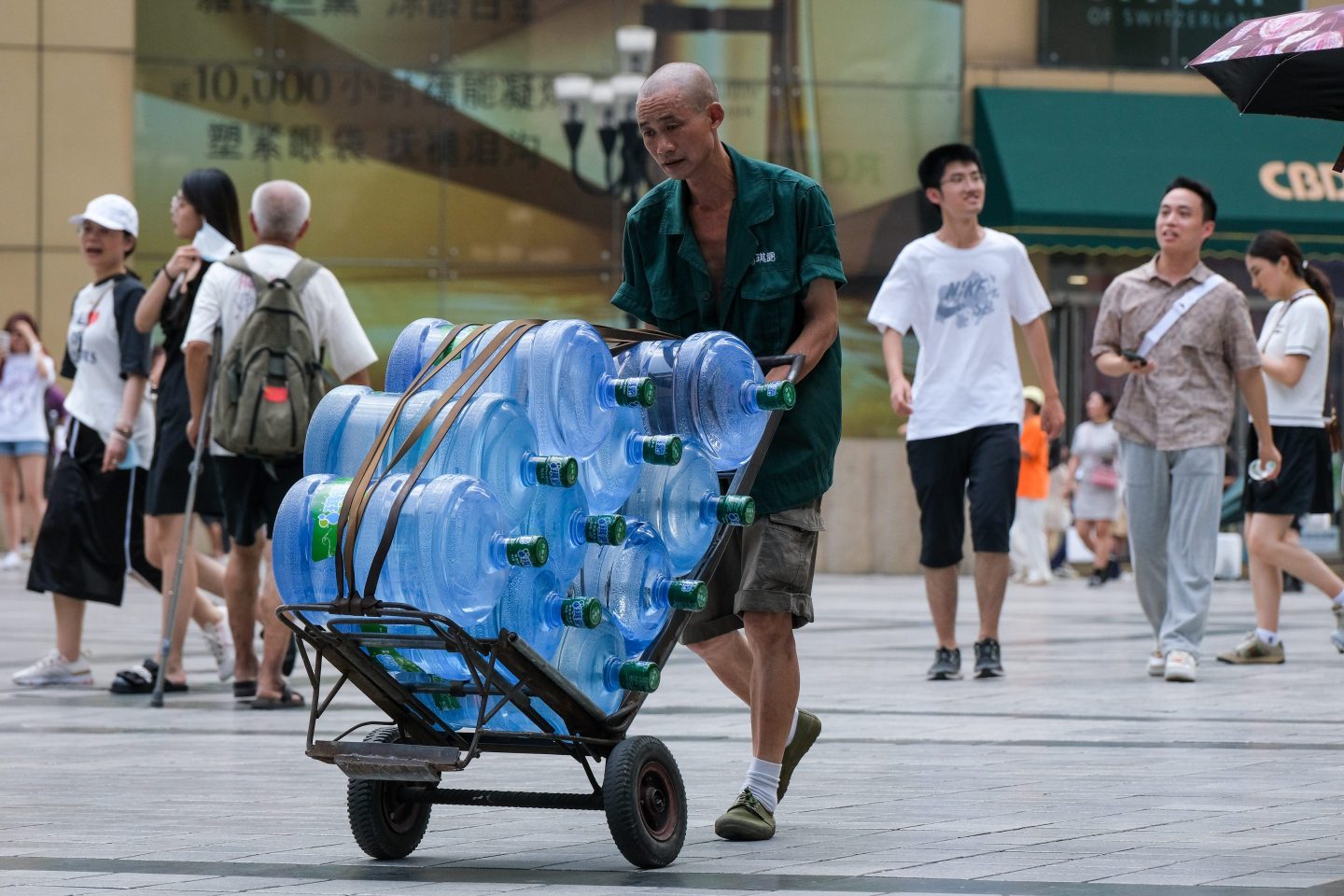 Heat waves are scorching China, Japan, the U.S., and the EU, running the risk of widespread blackouts.
He Penglei—China News Service/Getty Images

A scorching heat wave is blazing across China this week, delivering temperatures up to 42°C (105°F). In the southern city of Chongqing on Tuesday, tiles on a museum roof exploded in the midday heat after the sun melted the tar beneath. Meanwhile in Shanghai, where rising COVID cases this week risked another lockdown, health care workers in full-body hazmat suits have been photographed hugging blocks of ice to stay cool.

China isn’t the only country sweltering under the sun this week. Temperature records are being broken in Japan, the U.S., Australia, and across Europe too.

The surging temperatures are causing spikes in energy demand, straining electrical grids to the limit as residents crank up the AC. And so, in order to prevent unexpected blackouts this surge could cause, utility operators across the world are turning to a desperate measure: paying their industrial customers compensation to shut down operations and go home.

Managing an electrical grid is a delicate operation of matching supply with demand. Pumping too much electricity into a grid—where supply outstrips demand—overloads the system and causes blackouts. Providing too little electricity, on the other hand, means some customers won’t get served.

To avoid the latter scenario, utilities are entering into “demand response agreements,” arrangements in which a utility customer agrees to reduce its own power usage—for a fee—in order to lower overall demand and free up electricity for the grid.

“These particular agreements are becoming more and more common, as the grid is evolving,” says Gary Lawrence, power and grid segment president at Schneider Electric. “And they’re evolving very fast in the U.S., the U.K., and Australia.”

In Hangzhou, a city south of Shanghai, textile manufacturers have begun to power down production lines to comply with a government notice to conserve energy after temperatures topped 105°F on Monday. One manufacturer told the South China Morning Post that there are “government subsidies for companies that cooperate with power restrictions” but didn’t provide details.

In Texas, where temperatures have hit 110°F, the Electric Reliability Council of Texas (ERCOT) has begun compensating Bitcoin miners for switching off their power-hungry rigs.

According to Lee Bratcher, president of the Texas Blockchain Council, “nearly all industrial-scale Bitcoin mining” operations in Texas had shut down their rigs as of Monday. Energy management service firm Voltus says miners can generate up to 10% of their annual revenue by providing shutdown services to the grid.

In Japan, which is experiencing its worst heat wave since 1875 with temperatures soaring above 95°F, the Tokyo Electric Power Co. (TEPCO) has agreed to subsidize manufacturers for reducing power demand so electricity can be rerouted to essential services.

In an email to Fortune, Japanese chip manufacturer Renesas said it had “entered into a ‘demand response agreement’ with TEPCO to cooperate with their energy saving measures,” meaning the company had agreed to reduce its energy consumption to increase supply on the grid. Renesas declined to provide details of the agreement.

According to the International Energy Agency (IEA), the volume of demand response agreements in place will need to increase 10-fold over 2020 levels to meet the net-zero carbon emissions by 2050 objective. But energy policy planners are still figuring out how to build the best incentive structures around demand response agreements so that enough industrial players sign up.

Ahead of a potentially devastating winter in Europe—where the war in Ukraine throttled an already gasping energy market—the U.K.’s National Grid is reportedly considering offering industries compensation of up to £6,000 ($7,000) per megawatt-hour saved, which is roughly seven times the amount power companies charge for the same amount used. (One megawatt-hour is roughly the amount of electricity 330 homes use in an average hour.)

One notable laggard in developing demand response systems is the EU, where temperatures this week have hit par with the 118°F heat in Death Valley.

Lawrence says many countries in the EU have regulatory frameworks that prevent (or fail to incentivize) data sharing among energy suppliers, grid operators, and end users, which is necessary for effectively managing demand response agreements. “To be frank, Europe is very, very behind the times,” he says.