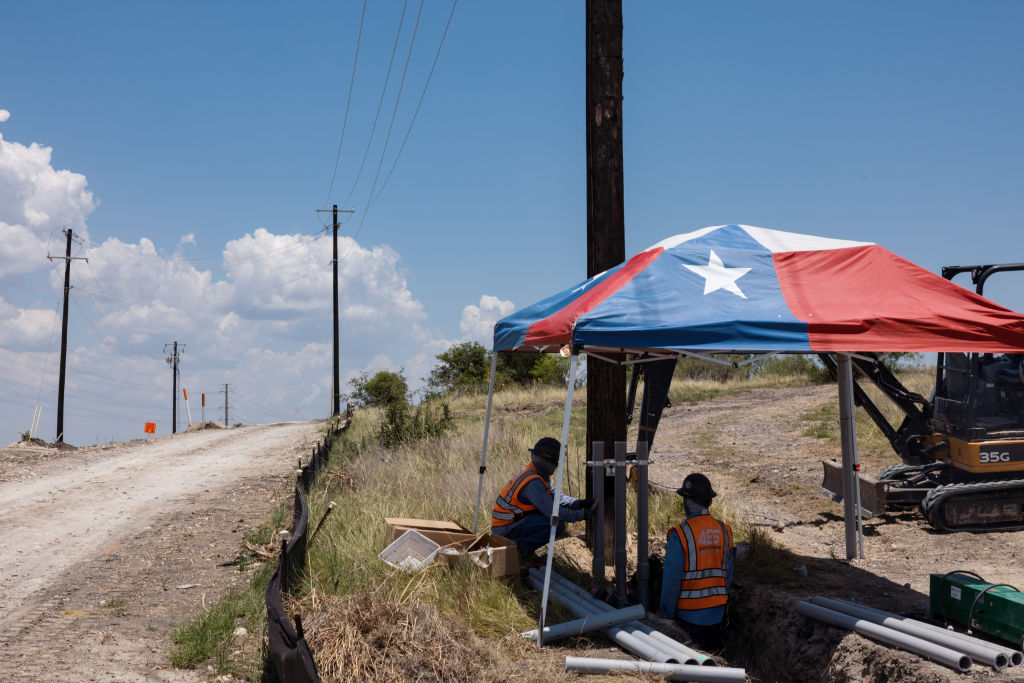 Workers install infrastructure under a Texas flag–themed tent during a heat wave in Austin, on July 11, 2022. Texas residents and businesses are being asked to conserve electricity during a heat wave that’s expected to stretch the state’s grid.
Jordan Vonderhaar—Bloomberg/Getty Images

Temperatures in Texas shattered century-old records over the weekend as a blistering heat wave baked the Lone Star state under triple-digit heat. With temperatures reaching 110°F in central Texas, the state’s grid operator issued a warning Monday that rolling blackouts were “possible” in coming days and urged consumers and industry to scale back power usage.

Bitcoin miners, which flocked to Texas in 2021 after China banned the industry, have heeded the call.

According to Lee Bratcher, president of the Texas Blockchain Council, “nearly all industrial-scale Bitcoin mining” operations in Texas have shut down their rigs as of Monday, Bloomberg reports, freeing up 1,000 megawatts of electricity to be redistributed by the grid. Bratcher says that’s equal to 1% of Texas’s total grid capacity.

Texan Bitcoin miners have powered down during previous crises, such as when a winter storm gripped the state in February. Reducing demand from power-hungry Bitcoin mines freed up power supply for more life-giving services, like heating.

“We are proud to help stabilize the grid and help our fellow Texans stay warm,” Nathan Nichols, CEO of mining firm Rhodium, wrote on Twitter at the time.

But miners aren’t switching off their rigs just to be altruistic; economic incentives are driving that decision.

Grid operator the Electric Reliability Council of Texas (ERCOT) brokers “demand response” agreements that pay industries, including some Bitcoin miners, to downsize operations during times of peak demand to provide more energy to the grid. For Bitcoin miners, which can power operations on and off with the flip of a switch, taking ERCOT’s payout rather than continuing to mine Bitcoin during times of tight power supply makes a lot of sense.

Bitcoin mines are only profitable so long as the cost of the energy they use remains below the value of Bitcoin gained. That calculus is why miners seek out jurisdictions like Texas, where electricity prices are relatively low. But a weather-induced spike in demand across the grid inflates the cost of electricity and reduces profitability for Bitcoin miners.

According to energy management service firm Voltus, a miner can generate up to 10% of its annual revenue by providing shutdown services to the grid. With Bitcoin’s value in a slump, it’s probably better for miners to take the paid holiday and shut down while the sun is high.