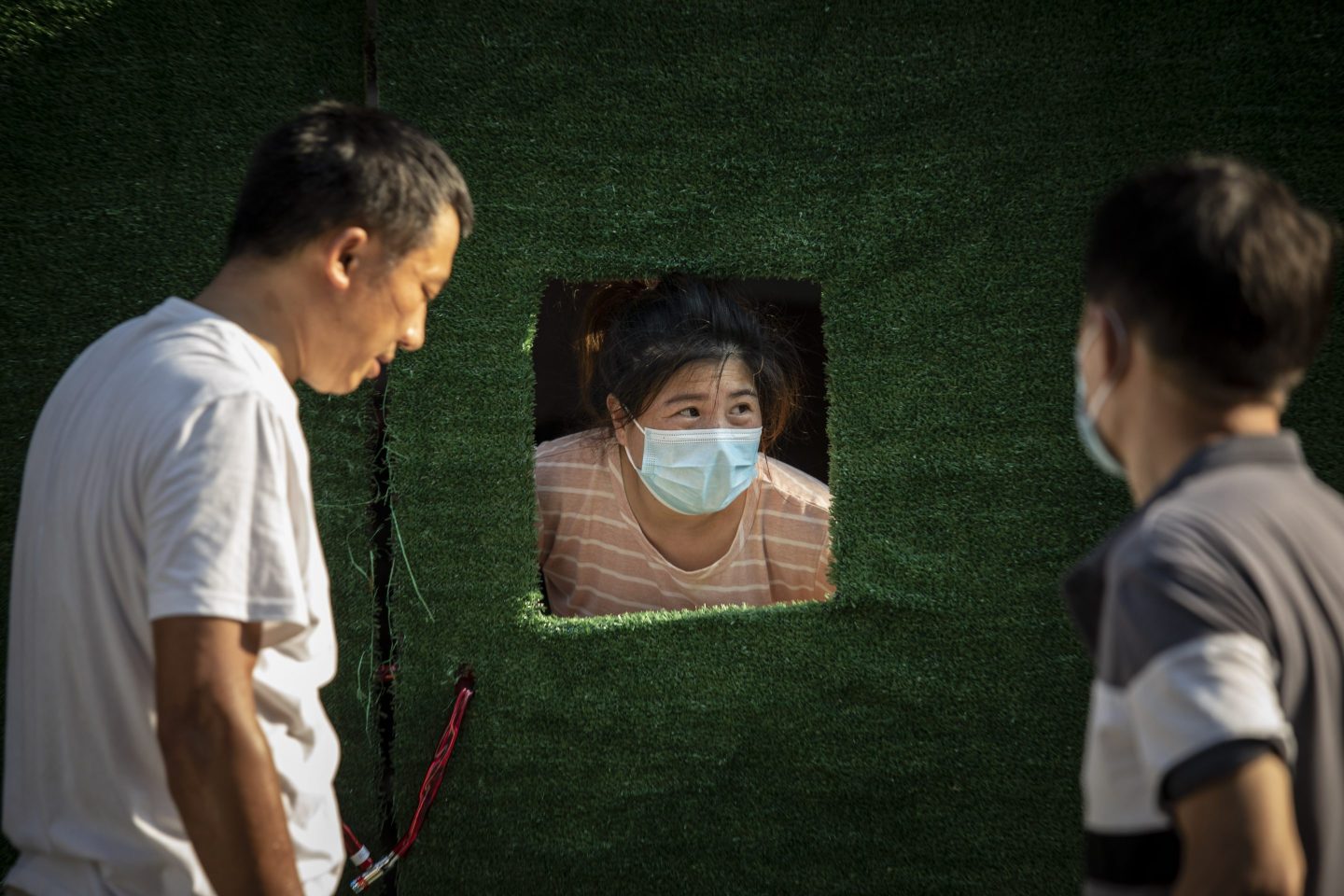 A resident peeks through an opening in the barricade surrounding a neighborhood placed under Covid-19 lockdown in Shanghai, China, on Sunday, July 10, 2022.
Qilai Shen—Bloomberg/Getty Images

Shanghai officials on Sunday reported that the first case of the Omicron sub-variant BA.5 had entered the city and warned that the risk of a broader outbreak was “very high.” Shanghai residents are now on edge that the government could send them back into isolation just weeks after releasing them from a months-long lockdown that stoked public rage and crippled parts of the global economy.

In total, Shanghai reported 57 new cases on Saturday marking the city’s highest total since May. The spike in cases, combined with the one confirmed BA.5 case, has put Chinese authorities on high alert given how fast the variant has taken over elsewhere.

BA.5 became dominant in the U.S. just two months after it first appeared, rapidly displacing previous subvariants of Omicron including the fast-spreading BA.2 and BA.2.12.1 strains. The BA.5 sub-variant is also causing spikes of COVID cases and hospitalizations across Europe, Asia, and the Middle East.

Some scientists say that BA.5’s high transmissibility is likely due to its ability to dodge vaccines’ immune defenses. That evasiveness, combined with BA.5’s greater ability to reinfect people who’ve previously contracted COVID, may make the subvariant the most infectious virus in the world. A new pre-print from South Africa shows that each person infected with BA.5 may infect, on average, 18.6 others, which would make the Omicron subvariant more transmissible than measles, which was previously found to be the world’s most infectious disease.

China’s government recently demonstrated its willingness to go to extreme lengths to contain the original Omicron variant. That strain of COVID may be roughly half as infectious as BA.5, meaning that China may need to impose even harsher lockdown measures to contain the new variant should authorities lose control of the outbreak.

From April to early June, Shanghai’s government confined the city’s 26 million residents to their apartments—save for trips to COVID testing booths—while the city’s economy ground to a halt.

The months-long lockdown disrupted global supply chains and likely cost China’s economy hundreds of billions of dollars. Before the Shanghai lockdown, economists believed that China’s economy was set to grow 8.2% in 2022. But economists surveyed by Nikkei Asia have since halved their expectations to 4.1%.

Shanghai is a critical cog in global supply chains, and the city’s shutdown rippled across the global economy and helped fuel inflation. In quarterly earnings calls this spring, over 180 firms cited the Shanghai lockdown as a drag on their businesses. Elon Musk, CEO of Tesla, attributed the electric vehicle giant’s slow start to this year to the Shanghai lockdown and the temporary closure of Tesla’s Shanghai giga-factory. “We [lost] a lot of important days of production,” Musk said in a quarterly earnings call in May.

In April and May, Shanghai residents were already getting fed up with the government’s increasingly draconian measures to contain a virus that appears to be getting less and less deadly. Some Shanghai residents protested the restrictions on their movement, which had cut them off from accessing basics like food. If BA.5 spreads widely, it may be even more difficult to convince a lockdown-weary Shanghai that more quarantines and isolation are necessary.

Still, the rise of BA.5 may be prompting Chinese officials to re-impose some restrictions that hobbled China’s economy earlier this year.

Shanghai authorities have not announced a citywide lockdown, but residents report that authorities are locking people in residential compounds across the city.

For now, at least some analysts appear optimistic that Shanghai will refrain from shutting down the entire city. UBS Global Wealth Management wrote in a note published Monday that it expects China’s COVID restrictions to continue to take “the form of rolling mini-lockdowns for the rest of the year.” UBS predicted that such measures will be “less disruptive to production or supply chains” than lockdown measures earlier this year.

In total, just over 8% of China’s population, 114 million people, are now living under partial or complete COVID lockdowns, according to Japanese investment bank Nomura.

In Xi’an, schools and most businesses in the city have been closed since last Wednesday after the city discovered a cluster of 18 BA.5 cases. In the special administrative region of Macau, authorities have shut down casinos for the first time in over two years due to a BA.5 outbreak. Haikou, a vacation destination in southern China, has also closed most businesses for the next week due to a new outbreak, though it is unclear what COVID variant is spreading in the city.