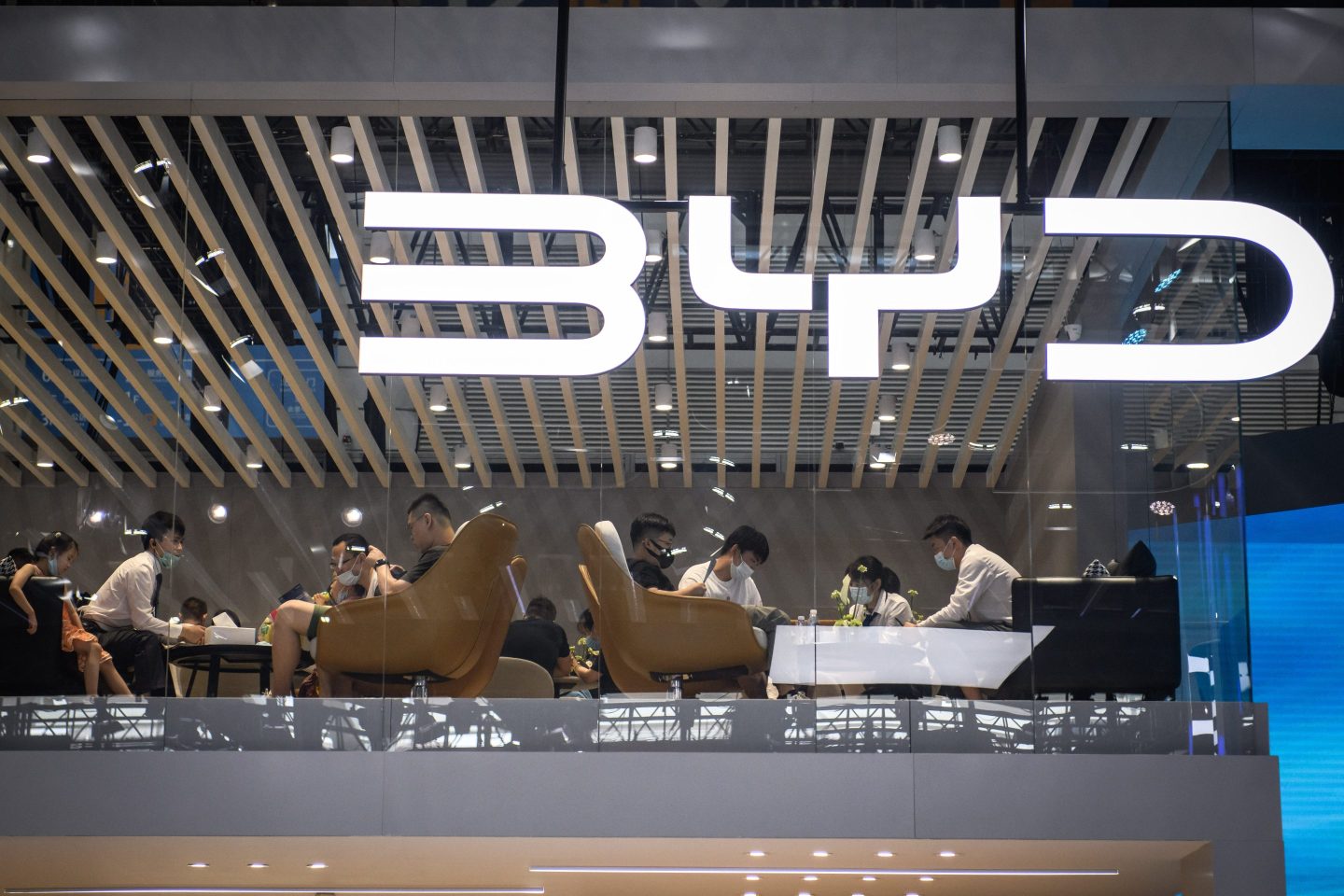 Speculation that Warren Buffett would exit his BYD stake sank shares on Tuesday, erasing the carmaker's gains for the year.
Stringer—Anadolu Agency/Getty Images

BYD investors are spooked by an inconveniently-sized addition to a Hong Kong clearing database.

Shares in the Chinese electric car manufacturer—which recently beat Elon Musk’s Tesla in global deliveries of electric vehicles—slumped 12% on Tuesday after 225 million shares were added to the Hong Kong Exchange and Clearing’s Central Clearing and Settlement System on Monday, a precursor to a share sale. The number of BYD shares in the clearing database matches the stake owned by Warren Buffett’s Berkshire Hathaway, acquired in 2008.

“Only Berkshire would have that many shares as a single investor, so the market is worried Buffett is planning to sell,” Steven Leung, executive director at UOB Kay Hian, told Bloomberg on Tuesday.

BYD shares dipped 0.7% on Wednesday, leading to a weekly decline of 17.5%. (The broader Hang Seng Index is down 3.9% over the same period.) The slump reversed a three-month rally in which BYD shares doubled in value. Shares in the carmaker are now just 1.1% above where they started the year.

BYD did not immediately respond to Fortune’s request for comment, but the carmaker told the Financial Times that no major shareholder had issued a statement to the Hong Kong exchange about a change in holdings, which is required under the exchange’s regulations. Berkshire Hathaway did not immediately respond to Fortune‘s request for comment made outside of U.S. business hours.

A Buffett exit would be a major turning point for Berkshire Hathaway and BYD. Buffett first invested in the Chinese carmaker in 2008, purchasing 225 million shares for $230 million. Buffett’s stake was worth $9.3 billion on Thursday before the shares started their slide, making the bet one of Berkshire Hathaway’s most lucrative. The stake is worth about $7.7 billion now.

Buffett invested in BYD after his longtime business partner Charlie Munger sang the praises of BYD founder Wang Chuanfu. Munger told Fortune in 2009 that Wang “is a combination of Thomas Edison and Jack Welch—something like Edison in solving technical problems, and something like Welch in getting done what he needs to do.”

Some of BYD’s other backers had already started to trim their stakes in the automaker. In 2021, Himalaya Capital downsized its ownership in BYD from 7.03% to 6%, making a tidy return of $309 million. Himalaya Capital founder Li Lu was actually the investor who first introduced BYD to Charlie Munger and Warren Buffett, leading to Berkshire Hathaway’s investment in the carmaker.

Investors have been bullish on BYD over the past few months. The Chinese government has offered tax breaks to consumers for car purchases in a bid to support the auto sector after the country’s COVID lockdowns hit demand.

BYD was also insulated from the disruption of COVID lockdowns in Shanghai, the hub for much of China’s auto manufacturing. BYD’s factories are located throughout China, like in the southern city of Shenzhen.

By comparison, Tesla—with its Shanghai Gigafactory—faced severe production constraints amid Shanghai’s lockdown. Even though the government allowed factories to restart operations under “closed-loop” systems that required workers to live on-site to minimize the chance of a COVID outbreak, Tesla struggled to meet production targets. COVID outbreaks among Tesla’s suppliers led to parts shortages, forcing the carmaker to cut factory shifts.

Earlier this month, Tesla said that its quarterly deliveries dropped 18%, blaming disruptions in Shanghai. BYD deliveries, in contrast, surged 21% from the previous quarter.

Yet BYD’s growth has come at a cost. In May, authorities launched an investigation into BYD’s Changsha factory after nearby residents reported nosebleeds and respiratory difficulties. The company denied that it was responsible for the ailments and claimed it followed national regulations. The carmaker reported that volatile organic compounds emissions around the Changsha factory had tripled from a year earlier.

Separately, in late June, Chinese regulators announced a recall of 9,600 hybrid sports utility vehicles from BYD due to a risk of battery fire. Dealers claimed that BYD asked them to also replace batteries in SUVs not subject to the recall, leading to concerns about transparency, reports Reuters.