Buffett-backed BYD just surpassed Tesla in EV sales. Now its shares are slumping after hint that Berkshire Hathaway may be preparing to sell its stake 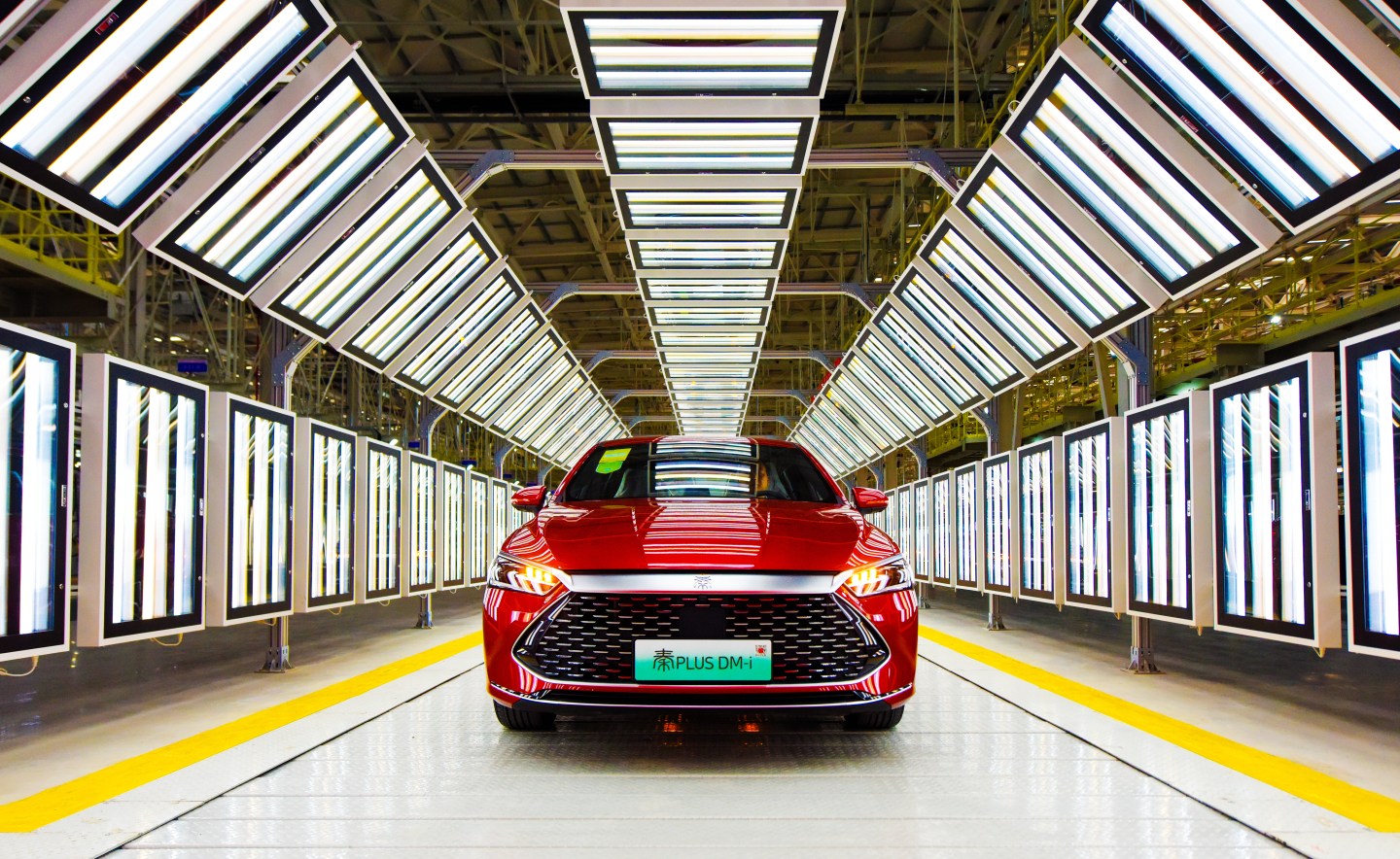 The first vehicle, a Qin Plus DM-i sedan, rolls off the assembly line at BYD's new manufacturing base on June 30, 2022 in Changfeng County, Hefei City, Anhui Province of China.
VCG via Getty Images

BYD Co. shares sank the most in nearly two years after a stake matching the size of Berkshire Hathaway Inc.’s position in the Chinese electric-car giant appeared in Hong Kong’s clearing system, fueling speculation that Warren Buffett’s company may be adjusting its holdings.

The 20.49% stake — identical to the size of Berkshire’s last reported holding in Hong Kong as of December — entered the Central Clearing and Settlement System, exchange data as of Monday showed. While there are many reasons a stake might appear in CCASS, such moves are often seen by traders as precursors to sales because shares must enter the system before transactions can be settled.

“Only Berkshire would have that many shares as a single investor, so the market is worried Buffett is planning to sell,” said Steven Leung, executive director at UOB Kay Hian in Hong Kong.

Even though Buffett has given no obvious hints that he’s souring on BYD, the possibility that one of the most successful investors of all time might be paring his stake was enough to send the stock down as much as 14%. Before Tuesday’s tumble, BYD had posted a two-year gain of nearly 300% in Hong Kong trading, making it among the city’s top-performing large cap stocks and trouncing the 128% advance in Elon Musk’s Tesla Inc. over the same period.

Berkshire Hathaway didn’t immediately respond to a request for comment after normal business hours, while BYD couldn’t immediately be reached for a response. Citigroup Inc., which is indicated as the custodian for most of the new shares in CCASS, declined to comment.

BYD shares held most of their losses even after the Securities Times reported that the stake held by Buffett’s firm remains unchanged. The newspaper cited an unidentified official at the automaker’s securities affairs office. The stock was down 9.4% as of 2:34 p.m. in Hong Kong.

BYD’s Hong Kong-listed stock reached a record high in June after nearly doubling from a March low. Chinese EV stocks have soared in recent months — bucking a selloff in Tesla — thanks to a slew of government stimulus measures designed to boost consumption amid an economic slowdown.

Investors have viewed BYD as a bellwether stock for the Chinese EV sector. The company has successfully navigated supply chain disruptions caused by Shanghai’s Covid lockdowns, posting record monthly production and sales in May. Analysts expect BYD to sell 1.5 million vehicles this year, doubling from 2021, with its vertically-integrated business structure giving it a lead over rivals.

Despite the share surge in recent years, BYD’s forward price-to-earnings ratio of 67 is still near its three-year average and much lower than its local peer Li Auto Inc.’s ratio of 148, according to Bloomberg-compiled data. BYD’s multiple, however, surpassed that of Tesla in late April.

“Buffett has held his stake outside of CCASS for thirteen years,” David Blennerhassett of Quiddity Advisors wrote in a note Tuesday. “This CCASS transfer suggests a block trade may already have been inked and will be announced shortly. I’d look to sell here and on any uptick. This is a significant overhang on BYD’s shares.”