Elon Musk once laughed at Warren Buffett–backed BYD. Now, the EV maker is on such a hot streak not even a pollution scandal can stop it 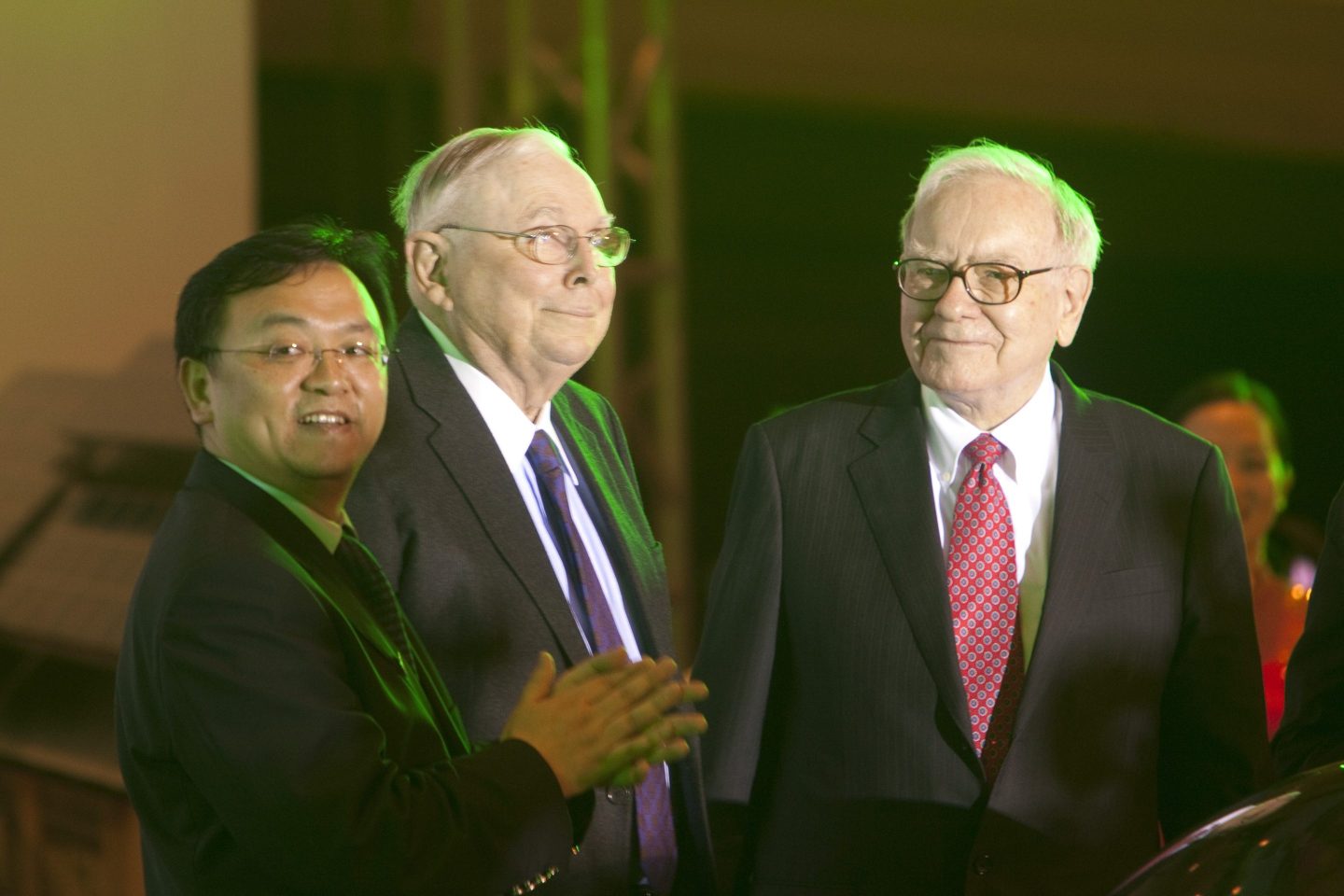 Just over a decade ago, the slightest mention of BYD was enough to provoke a fit of giggles from Tesla CEO Elon Musk. “Have you seen their car?” he said during a Bloomberg News interview at the time, adding that he didn’t consider the Chinese EV maker a Tesla competitor. “I don’t think they have a great product,” he said.

Eleven years later, Musk may be on the brink of eating his words. BYD cars are among China’s most popular vehicles, and the company’s sales are soaring as Beijing incentivizes citizens to reduce their carbon footprint. BYD now sells more cars per year in China than any other domestic brand and ranks second in sales overall. Its stock has soared, making a 2008 investment from Warren Buffett’s Berkshire Hathaway one of the firm’s most lucrative bets. The latest sign of BYD’s success is a rumored deal to sell batteries to Tesla, which—if confirmed—would be a remarkable admission from Musk’s EV giant that BYD has, in fact, achieved technological prowess. But BYD’s rapid growth is accruing costs; namely, a spike in factory emissions that’s reportedly sickened nearby residents and tainted BYD’s green credentials along with those of the larger EV industry.

Wang Chuanfu, now China’s 20th richest man, founded BYD—short for Build Your Dreams—in Shenzhen in 1995 as a maker of rechargeable batteries for all sorts of gadgets—from mobile phones to power tools. The world’s smartphone revolution stoked demand for the company’s components, casings, and assembly line production from customers including Apple, Nokia, Huawei, and Samsung, and BYD sunk its earnings into more advanced battery research. It started supplying electric vehicle batteries to other car companies in 2018.

With its technology powering many of the world’s most ubiquitous devices—from Dell laptops to Roomba vacuums—BYD’s battery business generated 15.4 billion yuan ($2.4 billion) in 2021, up 31.6% from a year earlier. The company overtook Panasonic as the world’s third-biggest battery maker for EVs in the first quarter of 2022, ranking behind Chinese rival Contemporary Amperex Technology Co. Limited, or CATL, and LG Energy Solution, according to South Korean renewable technology firm SNE Research.

Investors are especially bullish on BYD’s Blade battery technology, which the company launched for electric vehicles in 2020. The thin batteries, whose arrangement resembles the multiple edges on a shaving razor, rely on lithium iron phosphate chemistry for their charge, rather than cobalt, which is notoriously dirty and dangerous to mine. The company has been using Blade batteries in all of its EVs since April last year.

“BYD repopularized a battery chemistry that was previously trending extinct by creating the revolutionary Blade LFP battery, which is the safest and cheapest battery in the industry,” said Bridget McCarthy, market research analyst and head of China operations at Snow Bull Capital, a Boston-based hedge fund.

BYD now seems poised to notch its highest profile battery sale yet. BYD executive vice president Lian Yubo hinted that a long-rumored deal with Tesla was in the works earlier this month. “We are now good friends with Elon Musk because we are preparing to supply batteries to Tesla very soon,” Lian told China’s state-owned broadcaster CGTN. Tesla has not confirmed Lian’s statement.

As BYD’s battery business has boomed so have its electric vehicle sales.

After entering the auto business in 2002 with the acquisition of Qinchuan Automobile Co., BYD capitalized on the Chinese government’s push to cut air pollution and traffic congestion, selling electric buses and monorails to cities nationwide. BYD distinguished itself from other automakers early on by making many of its components—from batteries to semiconductors—in house. That strategy drew investors including Buffett, whose firm bought a 10% stake in the company in 2008 after longtime partner Charlie Munger touted Wang as a founder who combined the technical know-how of Thomas Edison with the business smarts of Jack Welch.

In May, BYD vehicle sales rose to a record high of 114,943. Among automakers in China, BYD now ranks second with 509,619 units sold so far this year—up from 15th place last year—with sales of cheap plug-in hybrids helping it surpass its rivals. It trails only FAW-Volkswagen, the German automaker’s local joint venture, according to the China Passenger Car Association. BYD’s sales in the first five months of 2022 are more than double its total for the same period last year, despite BYD discontinuing production of internal combustion engine vehicles in March to concentrate on hybrids and electric vehicles.

The company’s stock in Hong Kong is up 18.3% so far this year. Since Buffett’s Berkshire Hathaway invested $232 million, BYD’s share price has soared. At the end of 2021, the investment was worth $7.7 billion, 33 times its initial value.

But that growth is coming at a cost.

In May, the municipal government of Changsha, a city in China’s central Hunan province, and the city’s Communist Party committee launched an investigation into BYD’s factories there after residents living nearby complained of nosebleeds, respiratory difficulties, and vomiting, local media reported. A 24-year-old assembly line worker reportedly suffered a stroke.

As demand for BYD’s products surged in 2021—sales rose 37% for the full year—emissions of volatile organic compounds, the kind of waste gases at the center of the Changsha pollution probe, surged almost threefold compared with the previous year, according to a corporate social responsibility report BYD filed with the Hong Kong stock exchange. The increase occurred despite China introducing new regulations in 2020 to reduce such emissions.

BYD did not return Fortune’s request for comment. In May, the company denied that its factory causes illness and said its emissions comply with national regulations, but that it had taken active measures to reduce odors, the company posted on Weibo. BYD has since told analysts that its Changsha plant is currently running only during the daytime, cutting production in half, though it did not attribute the slowdown to reducing emissions, specifically.

Bao Hang, an analyst at Greenpeace East Asia in Beijing, doubts that BYD can slash pollution at its Changsha factory at the same time it’s racing to fill orders. “[BYD] cannot deliver EVs to customers in time so they need to speed up production very quickly,” he says. “This event will hurt the efforts to build their image as a climate champion.”

BYD’s saga in Changsha speaks to the challenge facing the EV industry: As automakers scramble to meet soaring demand, emissions caused by manufacturing processes are multiplying, undercutting their reputation as an answer to fossil-fuel–burning cars.

The electric vehicle industry, for all its promise of lowering carbon emissions by removing internal combustion engines and tailpipes, is still filthy. Fossil fuels power charging stations, and battery packs consume commodities, many of which are no more socially responsible than oil, according to a June report from the Institute of Public & Environmental Affairs (IPE), a Beijing-based nonprofit. For instance, cobalt, a mineral used in many batteries, is produced with widespread use of child labor in the Democratic Republic of the Congo, the world’s biggest cobalt exporter.

“There’s a lot of places where electric vehicles are not so green,” said Edison Yu, a Deutsche Bank analyst. “It’s not just BYD, it’s not just Tesla, everyone has to deal with the fact that we’re building out these new supply chains on what were historically questionable practices.”

Tesla paid a $275,000 penalty in February to settle with the U.S. Environmental Protection Agency over Clean Air Act violations at its plant in Fremont, Calif. German regulators also fined the carmaker 12 million euros ($13.5 million) for breaching regulations for recycling used batteries, according to a Securities and Exchange Commission filing.

So far, the market has shrugged off BYD’s pollution investigation. Its share price is up 37.8% since the probe was announced.

“The story of BYD’s resilience throughout lockdowns and the chip shortage outweighed [the probe],” says McCarthy.

While investors may be concerned about the pollution issue, they seem resigned to the entire electric vehicle industry enduring a “messy” and “painful” transition to cope with higher demand, says Yu. “If you’re an investor and you’re concerned about [pollution] you might choose to invest in a different part of the equipment system. There are other ways to get exposure to electric vehicles.”

Others are less sanguine about the scale of the task ahead.

“We don’t want to solve the climate problem but create a pollution problem or a resources problem,” Bao says. “We need the new energy revolution to be really clean, not just for the car but for the whole manufacturing process.”

The IPE recommends greater efforts to reduce emissions in EV manufacturing, including increased use of renewable energy and more disclosures from EV makers on their environmental problems and plans to fix them.

Like investors, consumers seem unfazed by the environmental toll of EV manufacturing. Globally, EV sales doubled last year compared with the year prior, with more electric cars sold per week than during all of 2012, according to the International Energy Agency. China accounted for half of that growth. Worldwide EV sales in the first quarter of 2022 hit 2 million, a 75% increase from the same period last year.

For its part, BYD has produced three of the top five bestselling electric vehicles in China so far this year, according to the China Passenger Car Association. Tesla’s Model 3 is in seventh place; BYD’s bestselling electric sedan, the Qin, is outselling the Tesla car three-to-one.