Hong Kong has been almost completely closed to travelers for 2 years. So how did its flagship carrier become the world’s top airline stock? 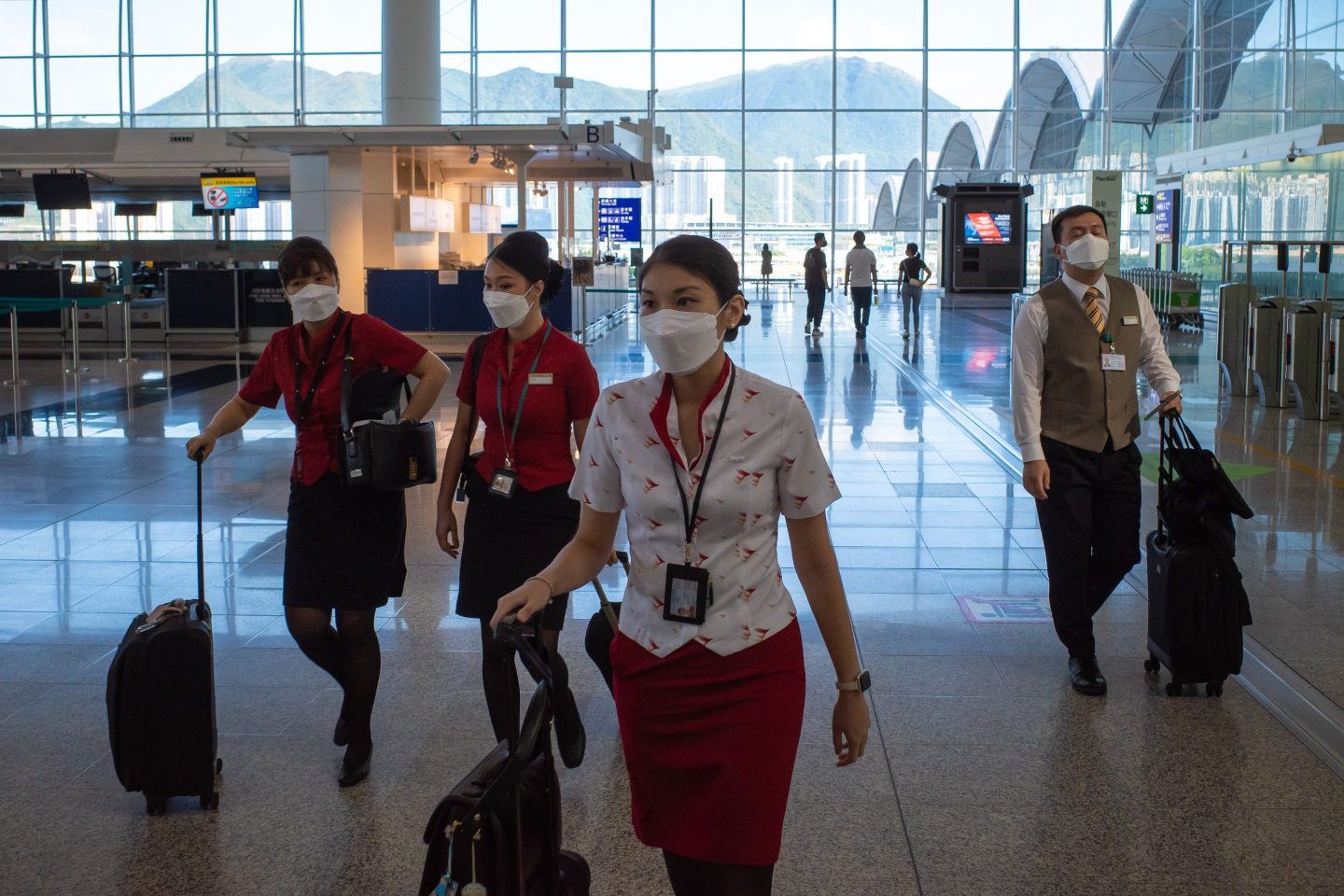 Cathay Pacific Airways is perhaps the world’s most beleaguered major airline. The Hong Kong-based carrier is at the mercy of its home’s tough COVID rules, which force international arrivals to spend weeks in isolation. Cathay is flying just 2% of the passenger flights it operated before the pandemic. Staff have quit amid tough quarantine requirements. Local politicians berated the airline after two of its flight attendants were accused of sparking the city’s worst-ever COVID outbreak.

Yet investors are still flocking to the airline. Cathay Pacific is the world’s best-performing airline stock, outperforming its regional and global competitors.

Shares in the Hong Kong-based airline are up 26.4% over the past twelve months. By comparison, the Dow Jones U.S. Airlines Index is down 30% over the same period. The STOXX Europe Total Market Airlines Index, which tracks ten European airlines like Ryanair, Deutsche Lufthansa, and British Airways parent International Consolidated Airlines Group, is down 35%.

Cathay Pacific has even outperformed other Asian airlines, whose shares have largely fared better than their Western counterparts. Shares of Singapore Airlines are up just 3% over the past 12 months, even though the Southeast Asian city-state has reopened to the outside world far more quickly than Hong Kong.

Analysts point to the revival of Cathay’s cargo business, the carrier’s ample liquidity, and a long-hoped-for review of Hong Kong’s quarantine policy as the factors powering investors’ positive sentiment. On June 24, Morgan Stanley called Cathay Pacific its “top pick” among Chinese airlines, ranking the stock as “overweight.” And even formerly bearish analysts are becoming more optimistic, with J.P. Morgan upgrading its rating of the airline to “neutral” the same day, citing a broader improvement in air travel and potential changes to Hong Kong’s COVID policy.

Cathay’s stock performance is rather remarkable since protests and COVID have battered the airline for over three years.

Amid Hong Kong’s social unrest in 2019, the airline’s then-chairman John Slosar defended Cathay employees’ right to take part in the city’s protests, saying that the company “certainly wouldn’t dream of telling them what they have to think about something.” The airline quickly backtracked after China’s airline regulator said that it would deem Cathay staff who had participated in protests a security risk and bar them from working in China.

The airline had just started to recover when COVID struck. In March 2020, Hong Kong’s government banned non-residents from traveling to the city and imposed a two-week quarantine on all international arrivals. Air travel to Hong Kong cratered 98%. The government also imposed snap bans on airlines’ flight routes if carriers brought too many infected passengers into the city.

After Cathay reported a net loss of $500 million in the first four months of 2020, the Hong Kong government stepped in to bail out the airline in June, taking a 6.1% stake worth $2.5 billion and offering Cathay a $1 billion loan.

Cathay subjected staff to rounds of unpaid leave and layoffs to keep costs low as planes stayed grounded. Yet the city’s tough quarantine rules meant the airline struggled to retain the staff that remained. The airline ran a “closed-loop” system for passenger flights, in which staff would fly for three weeks under strict isolation rules that kept them from ever interacting with the public overseas. When staff returned to Hong Kong, they completed hotel quarantine before reentering the community. The system, which forced employees to spend at least a month away from home and their families, caused burnout and triggered resignations among pilots and air crew.

Cathay’s shares reached their lowest point in the pandemic in September 2020, sinking to $0.67.

Still, Cathay turned a profit in the second half of 2021 largely due to its resilient cargo business that raced to meet strong consumer demand. Cathay earned $4.3 billion in revenue from cargo flights in 2021, a 53% increase from 2019. By comparison, Cathay earned $500 million from passenger traffic, just 6% of its 2019 total.

Yet the emergence of the Omicron variant in the city in January 2022 led Hong Kong to tighten its quarantine rules for cargo flights, forcing the airline to slash routes. To make matters worse, local politicians accused two Cathay flight attendants of flouting quarantine rules and introducing Omicron to the community. (Local public health experts disagree, arguing that a cross-infection in one of the city’s quarantine hotels sparked the city’s initial Omicron outbreak, which killed over 9,000 people.)

Cathay’s shares had recovered to $1 for much of 2021, but the emergence of the Omicron variant caused them to dip once more to $0.80.

Now analysts think the airline is turning a corner. On April 29, Hong Kong loosened its quarantine requirements on aircrew, permitting returning cargo flight crew to skip quarantine altogether once they test negative for COVID at the airport. Passenger flight crew now only have to complete three days of hotel quarantine before being allowed back into the community.

The government is also loosening its restrictions on passengers who enter the city. Hong Kong now allows non-residents to enter the city and requires all international arrivals to spend seven days in a quarantine hotel, down from 21.

Air traffic into the city is recovering, albeit from a very low base: over 100,000 visitors arrived in Hong Kong’s airport in June, up from 15,800 in January, according to data compiled by independent analyst David Webb. (For comparison, 660,000 travelers landed in Hong Kong in February 2020, the month before the city imposed quarantine on arrivals.)

Cathay now flies to 45 destinations, up from 29 at the beginning of the year. The carrier hopes to fly to 58 airports by the end of 2022—still a long way from the 108 destinations it served before COVID.

Cathay investors are closely tracking any positive news related to relaxed quarantine requirements, not just in Hong Kong but in mainland China too. The airline’s shares jumped 6.4% on June 28 after the Chinese government announced that it would halve the period of hotel quarantine for arrivals to seven days. Shares jumped an additional 6% on Thursday after Hong Kong removed its system of flight bans, which the government called “not very cost-effective” in preventing imported cases.

“A potential shortening, easing or removal of quarantine restrictions should unleash Cathay’s capacity and air travel demand, boosting earnings and sentiment on the stock,” Fan wrote in a June 30 note.

Hong Kong is reportedly considering reducing hotel quarantine for inbound passengers to five days, rather than the current seven. But those wishing for a complete removal of quarantine may be out of luck. On Friday, the city’s new health secretary told local newspaper Oriental Daily that the city would not consider quarantine-free travel with Mainland China or the rest of the world in the short-term.

Even with harsh passenger quarantine measures still in place, Cathay CEO Augustus Tang told the South China Morning Post in June that Cathay is “very much in a growth mode.” It’s aiming to hire—or re-hire—8,000 staff members, including 700 pilots and 2,000 cabin crew, by the end of 2023. Yet the airline—like many other airlines around the world—is confronting a labor shortage that’s made recruiting tough.

Cathay has ample cash reserves to wait out Hong Kong’s closed borders, says Cheng Wang, equity analyst for Morningstar. With $3.9 billion cash on hand and an anticipated monthly burn of less than $63 million, “liquidity is not a concern” says Wang. Another boost to the airline’s liquidity: a one-year extension of the $1 billion loan from the Hong Kong government.

The dimming outlook for airlines elsewhere makes Cathay’s future look especially bright, even as it operates out of one of the most isolated places on earth.