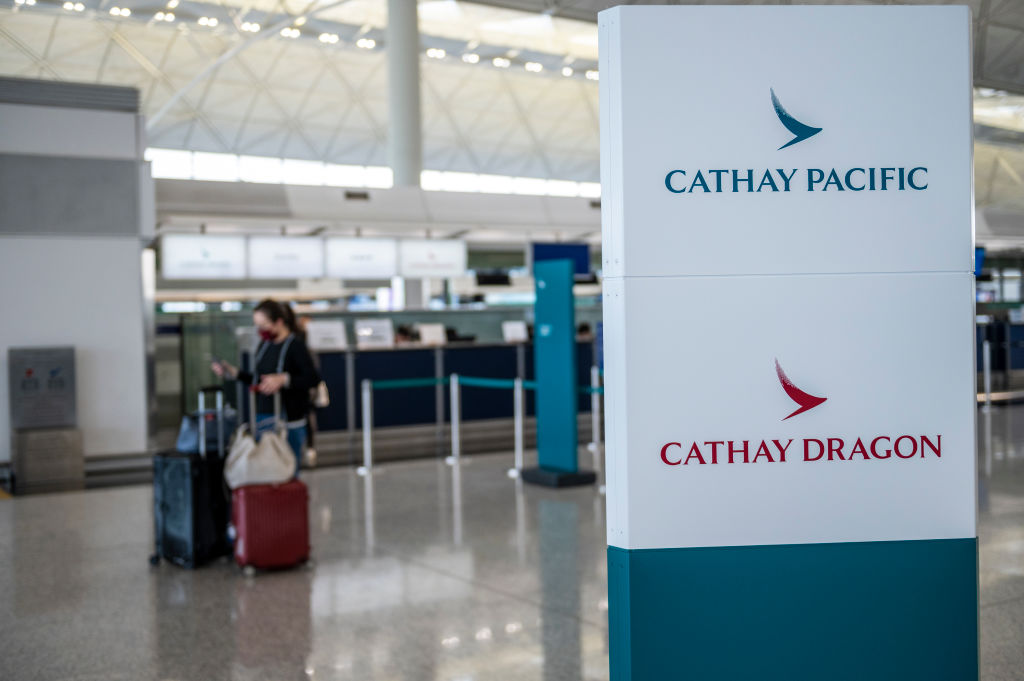 A passenger in a face mask waits by Cathay Pacific's check in desk during the coronavirus pandemic in February, 2020. (Photo by Vernon Yuen/NurPhoto via Getty Images)
Vernon Yuen—NurPhoto/Getty Images

Cathay is majority-owned by U.K. conglomerate Swire Group, which holds a 45% stake in the company. The second-largest shareholder is state-owned Air China, with a 30% stake. Cathay, Swire, and Air China halted trading of their shares ahead of the announcement.

The government is offering Cathay a HK$7.8 billion loan and is also taking a HK$19.5 billion stake in the company. The acquisition reportedly marks the first time Hong Kong’s government has made a direct investment in a private company and comes at a time when businesses in the city are facing greater pressure to support local government leaders and, by extension, national government officials to whom they answer in Beijing.

Cathay and its subsidiary Cathay Dragon posted a net loss of HK$4.5 billion ($581 million) in the first four months of this year. Healy claims the company has hemorrhaged roughly HK$3 billion per month since February.

“The infusion of new capital that we have announced today does not mean we can relax. Indeed quite the opposite. It means that we must redouble our efforts to transform our business in order to become more competitive,” Healy said Tuesday. To that end, Cathay said it will implement a new round of executive pay cuts and a second round of voluntary unpaid leave for staff.

Cathay had returned to profit in 2018, following two years of losses. The company’s upward trajectory was masterminded by former CEO Rupert Hogg, who took on the role in 2017 and set out a three-year plan to turn Cathay’s losses around. Two years in, however, Hong Kong became embroiled in a mass political movement as protesters in Hong Kong staged regular demonstrations against a proposed extradition agreement with mainland China.

The airline was thrust into the center of the political turmoil last August when protesters shut down Hong Kong’s airport by staging a mass sit-in. Some Cathay Pacific employees joined the protests while others participated in strike action, which forced Cathay to cancel 130 flights in a week. As the protests escalated, a number of countries issued travel warnings to Hong Kong. Cathay’s revenue for the year dropped 3.7% over 2018.

Facing pressure from officials in Beijing and Hong Kong to denounce the protests, chairman John Slosar told reporters the company “wouldn’t dream” of telling staff “what they have to think.”

The next day, however, the Civil Aviation Administration of China (CAAC) said it would ban any Cathay staff who partook in protests from entering China. The CAAC demanded staff rosters of all Cathay flights for preapproval, too, and threatened to block unapproved flights from China’s airspace. In a remarkable U-turn, Hogg then told staff the airline had a “zero tolerance” policy toward staff engaging in “illegal protests.”

A week later, Hogg resigned, followed by Slosar shortly thereafter. After the two executives departed, some staff members complained of living under a “white terror”—a phrase used to refer to a period of extreme political persecution—as employees faced new disciplinary measures for supporting the protest movement.

A statement released by Cathay on Tuesday, announcing the government bailout, hinted that the company will undergo significant downsizing in future. According to Cathay, the company’s management team will recommend to the board the “optimum size and shape of the Cathay Pacific Group” in the fourth quarter.

“We are in a very dynamic situation. We need to make the right decisions to adapt to the new reality of global aviation and secure our long-term future,” Healy said. “This will require reevaluating all aspects of our business model in light of the rapidly changing macro and industry dynamics.”