Twitter upped the stakes of a free speech fight with India. Is it ready for the consequences? 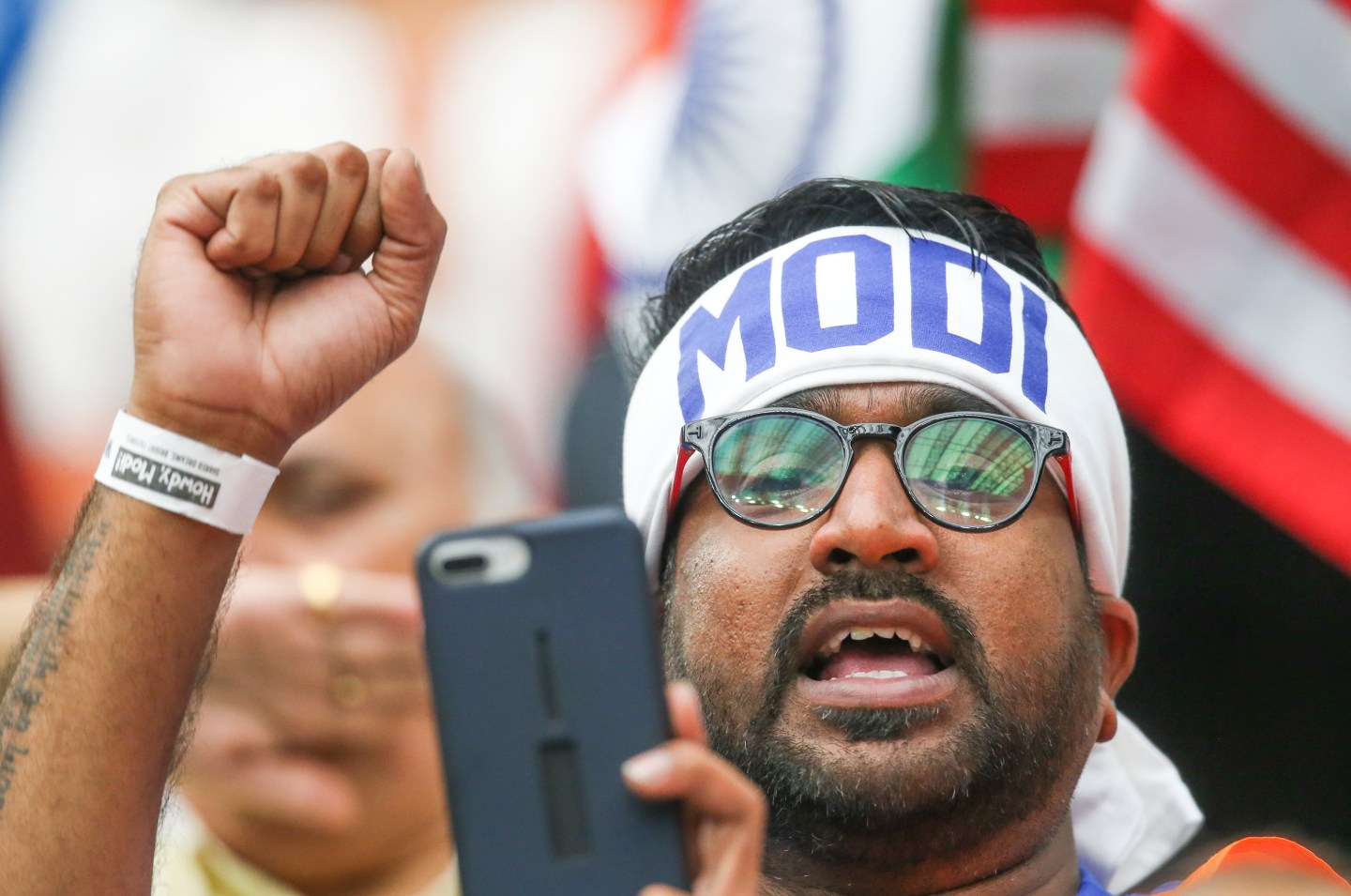 The power of the tweet versus the power of India's leader.
THOMAS SHEA—AFP/Getty Images

Twitter picked a high-stakes fight with the government of India on Tuesday, setting the stage for a showdown that will test the company’s commitment to free speech.

After more than a year of squabbling with Indian lawmakers over strict new censorship laws in the Asian nation, Twitter has taken the dispute to court and is suing the government over “arbitrary” and “disproportionate” orders requiring the company to remove content and block accounts, The Washington Post reported.

Twitter didn’t specify which orders it was challenging, but the ruling Indian government has sought in recent months to squelch dissenting voices criticizing Prime Minister Narendra Modi’s Hindu nationalist leadership. The New York Times reported that the lawsuit follows “a recent order from the Indian government for the company to remove content and block dozens of accounts.”

For Twitter, which has faced pressure from Indian government officials over its reluctance to comply with the new laws, it’s a high-risk move that could thrust the company into deeper conflict with New Delhi.

To date, Twitter officials have battled with Indian leaders over censorship demands outside of courtrooms.

Twitter has batted back most requests, reporting that it complied with only 12% of legal demands to remove or hide content in India in the first half of 2021, far below its global compliance rate of 54%. The company hasn’t commented on how it’s able to fend so many off.

Government officials, however, have used high-profile intimidation tactics against Twitter’s leaders in the country, at one point visiting the company’s offices after it labeled a political official’s tweet as “manipulated media.”

With Tuesday’s lawsuit, Twitter is taking the fight into the open. Kanchan Gupta, a senior adviser in India’s Ministry of Information and Broadcasting, hit back at Twitter on Tuesday, tweeting: “Sovereign laws of India are supreme, not @Twitter wokery. India’s rules will decide what Twitter can and can’t, not an intermediary’s mumbo-jumbo. Compliance is must.”

Before lionizing Twitter too much, it’s worth noting that the lawsuit doesn’t seek to overturn India’s strict censorship laws. Rather, Twitter argues that Indian officials “interpreted those laws too broadly,” the Times reported.

If Twitter loses this battle, however, the defeat would put the company in a precarious position.

A victory for Modi would likely further embolden his administration’s crackdown on political opponents and press freedom, potentially making Twitter an accomplice to this effort. Twitter’s most recent transparency report showed that Indian authorities issued 89 legal demands to censor verified journalists and news organizations in the first half of 2021, the highest total in the world. (Turkey, Russia, and Pakistan combined for 117 orders, while the U.S. made zero.)

In that case, Twitter must decide whether the financial cost of operating in India is worth the reputational damage.

Various reports Tuesday indicated that Twitter has somewhere between 25 million and 50 million active users in India, a nation of 1.4 billion people often seen as a growth target for tech companies. While Twitter doesn’t specify its India-based revenue in public financial reports, those user totals suggest the company could lose hundreds of millions of dollars by pulling out of the country.

Ultimately, this quandary likely won’t land in the lap of Twitter’s current leadership, but rather the company’s prospective $44 billion buyer, Elon Musk. (Assuming, of course, that Musk doesn’t abandon the deal, which is set to close later this year.)

For all of Musk’s free speech proselytizing in the U.S., he’s been conspicuously silent about India. In fact, Musk’s comments to date suggest he’d capitulate to the Modi regime. As evidence, see this tweet from late April: “By ‘free speech,’ I simply mean that which matches the law. I am against censorship that goes far beyond the law. If people want less free speech, they will ask government to pass laws to that effect. Therefore, going beyond the law is contrary to the will of the people.”

Twitter and the Modi administration were bound to butt heads in court over free speech. The question now is how far Twitter, and perhaps Musk, are willing to take this fight.

British inquiry begins. U.K. regulators began an initial investigation Wednesday into Microsoft’s planned $68.7 billion acquisition of video game developer Activision Blizzard, adding more scrutiny to the massive purchase. The U.K.’s Competition and Markets Authority set a Sept. 1 deadline for deciding whether to launch an in-depth review of the deal, which already faces scrutiny from U.S. regulators. Compared to its foreign counterparts, the CMA has pushed back more aggressively against large tech acquisitions in recent years.

Grabbing a slice. Grubhub’s premium offering will become part of Amazon’s Prime package under terms of a deal announced Wednesday, The Wall Street Journal reported. The agreement means Prime customers will not need to pay delivery fees when using Grubhub, a Just Eat Takeaway.com unit struggling against increased food-delivery competition and the reopening of restaurants. Just Eat Takeaway.com said the deal gives Amazon the option to buy a 2% stake in the company’s U.S.-based unit, potentially rising to 15% depending on the results of the partnership.

Got bills to pay. Crypto mining giant Core Scientific, a key figure in maintaining the stability of the Bitcoin network, sold about three-quarters of its Bitcoin holdings last month to cover mounting costs. Core Scientific leaders said they traded about 7,200 Bitcoin for $167 million, helping them pay for expensive mining servers and debt obligations, among other costs. The organization said in March that it operates about 10% of the Bitcoin network.

No escaping ads. The smartphone lock screen, currently the domain of precious kid, pet, and countless other sentimental photos, is getting sold out. TechCrunch reported Tuesday that advertising tech giant InMobi Group’s Glance unit is close to launching a lockscreen platform containing media and gaming content in the U.S. The Glance product could debut on domestic Android devices as soon as next month, under partnerships between InMobi and wireless carriers. Glance already operates on roughly 400 million smartphones in Asia, and it previously announced plans to add more global markets.

Three-year-old Glance is largely credited for identifying an opportunity to serve content on the lockscreen, prized real-estate which monetization has enabled smartphone vendors to boost their revenue in recent years. The startup personalizes content feed on the lockscreen based on users’ interests, prompting them to engage deeply with content.

In a move that further cemented Glance’s model, Apple said last month that it will be revamping the lockscreen on iOS with widgets, real-time info and other personalization features.

Ethereum just finished its second-to-last major ‘merge’ test and the main upgrade could be just months away, by Taylor Locke

TikTok denied U.S. user data was accessed in China. Then it admitted it was. Now senators urge FTC to probe ‘deception’, by David Meyer

Tech firm CEO reveals the email he sent to staff about working hours—and how it massively backfired, by Sophie Mellor

A hacker leaked the personal data of 1 billion Chinese citizens. Now censors are blocking victims of the breach from learning what happened, by Grady McGregor

A Dutch university recovered Bitcoin it paid in a ransomware attack—and now it’s worth $510,000, twice its value at the time, by Pablo Fernandez Cras and Bloomberg

What the media gets wrong in its persistent crypto criticism, by Miller Whitehouse-Levine

Lost in space. NASA could use a “Find My CAPSTONE” button right about now. The space agency confirmed Tuesday that it has lost contact with the moon-bound CAPSTONE probe, a 55-pound device that left Earth’s orbit earlier this week, Space.com reported. NASA officials said they’re still working to understand the cause of the disconnect, though they’re hopeful that contact can be restored. The probe, about as big as a microwave oven, is designed to test an orbit path around the moon ahead of a manned lunar mission planned for 2024. NASA contractor Advanced Space, which is running the CAPSTONE mission, has a little time to solve the problem: the probe isn’t scheduled to reach the moon until November.