Unions are making their biggest comeback since the ’60s. Here’s how workers are winning, according to 2 longtime labor organizers 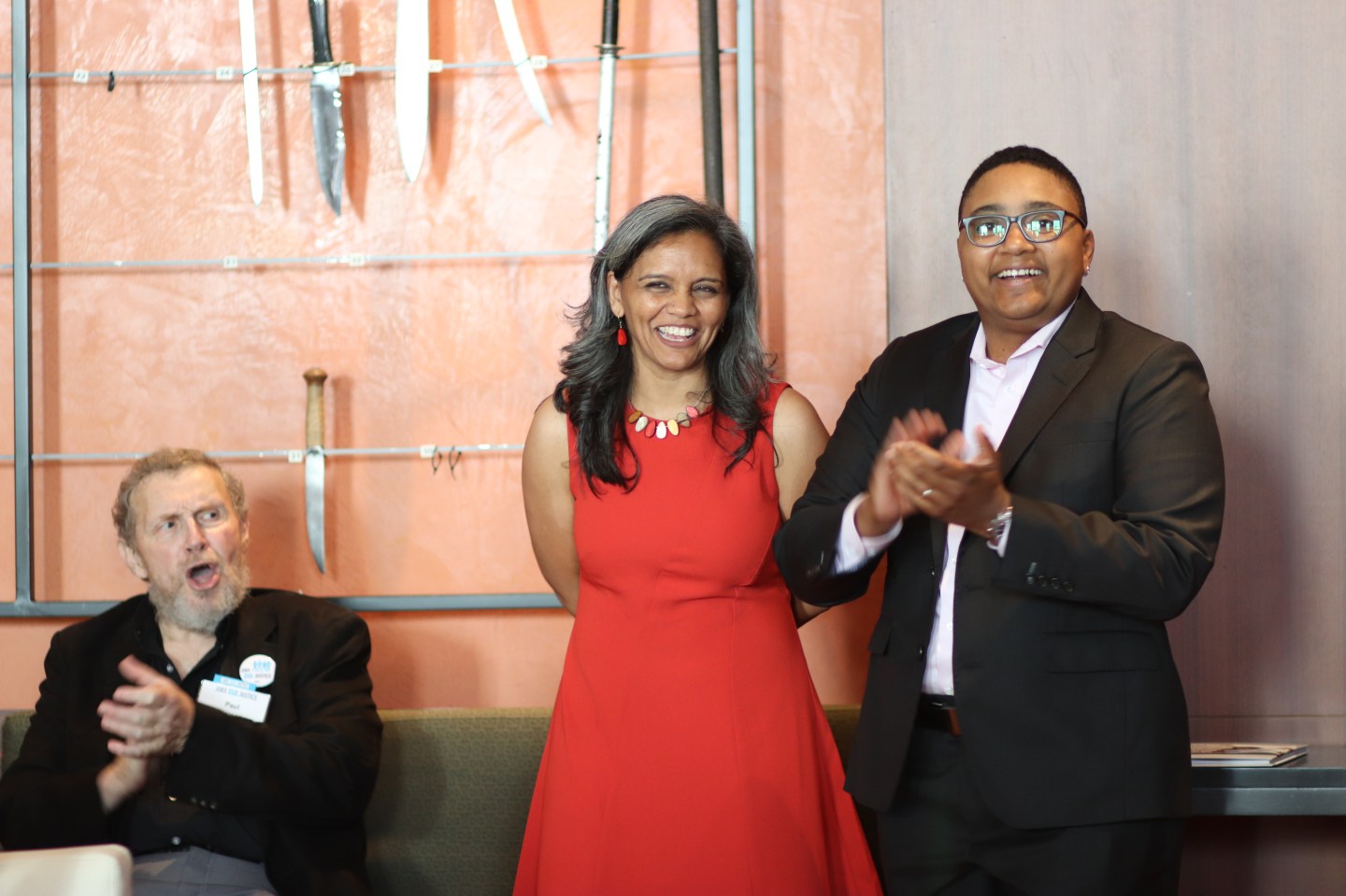 Authors and labor organizers Sarita Gupta (left) and Erica Smiley discuss how workers are organizing in and out of traditional union contexts—and how they’re winning better working conditions.
Jobs for Justice

The first Amazon warehouse in the country voted to unionize earlier this month in an unprecedented win for the independent Amazon Labor Union. Starbucks workers across the country continue to file successful petitions for union elections, now numbering far above 200 stores nationwide—even as the company tries to shut them down. According to an oft-cited Gallup poll from last fall, 68% of the public support unions, the highest rate since the 1960s. All in all, it’s an exciting time to be a labor organizer in the U.S.

Thousands of workers, though, are left out of the excitement. The National Labor Relations Act (NLRA), the cornerstone of the country’s labor organizing legislation, excludes the contract workers who make up the growing gig economy. But just because they face legal hurdles to unionizing doesn’t mean they can’t still advocate for themselves and push for better treatment.

In their new book The Future We Need: Organizing for Democracy in the Twenty-First Century from Cornell University Press, labor organizers Erica Smiley and Sarita Gupta discuss how workers are organizing in and out of traditional union contexts—and how they’re winning better working conditions.

Why was now the right moment to write The Future We Need?

Sarita Gupta: Smiley and I began writing this book near the end of my tenure at Jobs for Justice. We were a network on the frontiers of the labor movement, often working on cutting-edge issues with traditional labor unions, as well as emerging worker centers and workers who were beginning to organize outside of the traditional realm. We thought it was important to take this moment to both document what we were seeing and what it was telling us about the future of workers’ rights issues.

The pandemic showed just how off our laws are from people’s lived experiences. So if you think about the conversation now about wages, suddenly $15 has become a new normal in many parts of the country. Workers are saying: “I can’t live on this, so I’m going to keep demanding more.”

How are workers able to catch up to an outdated labor law system?

Gupta: People aren’t waiting for the labor laws to shift and change. They’re speaking to the lived realities that they’re contending with, the real challenges, and beginning to organize. It’s important for us to acknowledge that there are groups of workers organizing outside of the current legal frameworks because they could inform what future legal frameworks can and should look like. I think this moment we’re in around the so-called Great Resignation, which Smiley and I refer to as the Great Awakening, is really a historic moment of refusal for workers who are saying, I don’t want to be in a job where I don’t have living wages, benefits, and what I need in order to live a full life.

Erica Smiley: We’re in a moment where more and more people are recognizing that there are some significant cracks in our democracy. But that’s not just a political problem. It’s a question of how can we allow the majority of people to negotiate their economic relationships, including employment relationships? The legal framework that protects those negotiations can’t just be based on how work was organized in 1935 [when the NLRA passed into law]. It has to be based on how work is organized now. Workers aren’t waiting for the perfect strategy or perfect protection, they’re trying to make the road by walking a little bit.

What does collective bargaining look like in the 21st century?

Smiley: There are places where people are able to still negotiate, organize, and collectively negotiate under the NLRA, and we think they should keep doing it. We want workers to also see contract negotiations as a site of struggle for issues far beyond the workplace. A collective bargaining agreement is just a policy for the workplace, right? So we want workers to apply the framework for democratic participation of collective bargaining to other economic relationships. Tenants negotiating with a large corporate landlord, medical debtors negotiating with the hospital, homeowners renegotiating mortgage rates with lenders. Collective bargaining is a practice that allows people to practice democracy and be a part of everyday standard setting that’s not just voting once a year.

Gupta: I’ll share one example: domestic workers, a workforce that’s still impacted by how white supremacy and patriarchy have shaped labor law in this country. They’re excluded from protections under the NLRA and the Fair Labor Standards Act. Over the last 10 years, we’ve seen the Domestic Workers Alliance come together to win basic protections and benefits for house cleaners and care providers all over the country. We try to ask in The Future We Need: What are the new and creative ways that workers are addressing issues of voice, agency, dignity, and respect in the workplace?

Considering that ProAct, which could help bring the NLRA up-to-date, is stalled in the Senate, what do you see as other necessary policy changes?

Smiley: The ProAct is a great start. But what we’re saying is that before we can get to policy, we need the practice. In addition to actually trying to change laws to match the labor ecosystem, we have to organize and we need to actually engage in changing culture and behavior and ideas. What that means for us is reminding people that change is something they want, that democracy is not just a vague thing that happens over there. It’s something that you do on a daily basis in your church, or at your PTA, or wherever, where you’re actively engaging in discussions and helping to make decisions. Rules don’t change until there’s a movement big enough to purposely break them and show why something is better.

How does change actually happen?

Smiley: When people are activated through any campaign, but particularly through a workplace campaign, there are residual implications for their community. Action is the oxygen that keeps our movement running. And so when workers are in motion, that’s providing fuel to a fire that will ultimately get us to these cultural change shifts that will allow people to see that this is what they should have.

Gupta: We should listen to people and understand what they need in order to live, work, and age with dignity—and then figure out what the new legal frameworks can and should be.

How do you encourage workers who might feel nihilistic when up against powerful corporations?

Smiley: The thing that I’ve seen motivates people the most is winning, even if it’s a very small thing. Ten or 15 years ago, we ran an online campaign to help an elderly worker at a Walmart in Florida get a stool. It was his second job and he needed the job, but he wanted to be able to sit down and he was a greeter. When the store said no, we ran a campaign to get the man a stool. That whole store signed up. All of a sudden everybody was ready to do something, and we got him a stool. That’s our job as organizers: to show workers that when we’re in motion together, we win.