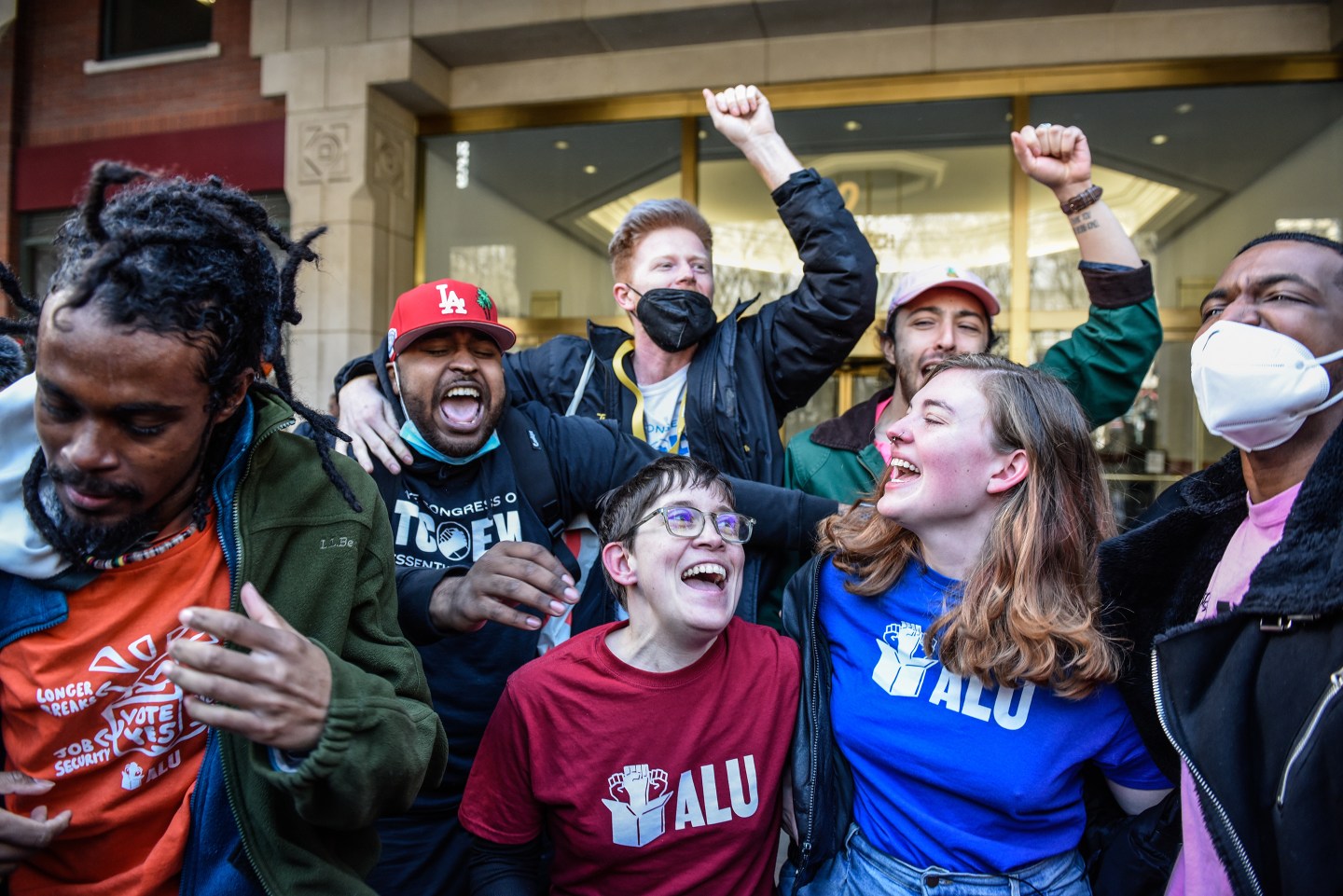 Amazon labor organizers and supporters celebrate outside the National Labor Relations Board offices in Brooklyn on April 1, 2022 after a historic victory.
Stephanie Keith—Bloomberg/Getty Images

Amazon workers voted to join the independent Amazon Labor Union (ALU) in a landmark election today. The union will represent over 8,300 workers at a Staten Island facility known as JFK8.

“Everyday I get up and organize,” said Christian Smalls, president of the Amazon Labor Union, in a press conference following the announcement of the results. “It’s always going to be Amazon versus the people. And today, the people have spoken, and the people wanted a union”

According to the National Labor Relations Board (NLRB), 2,654 workers cast votes in favor of unionizing and 2,131 against. There were a total of 4,785 votes counted, with several dozen voided or challenged by the ALU or Amazon.

Today’s ALU win occurs as the results of another Amazon union election hang in limbo. On Thursday, the NLRB tallied ballots cast by Amazon workers in Bessemer, Ala., to decide whether to join the Retail, Wholesale and Department Store Union (RWDSU). While 993 workers voted no to unionization, and 875 voted yes, there are 416 challenged ballots that will ultimately determine the outcome of this election. It will be several days until those results are finalized.

The simultaneous Amazon unionization campaigns represent a new wave of union activity spreading across the country. Additional high-profile campaigns include those at food service giant Starbucks and among tech workers at The New York Times and Google.

Still, union membership in the U.S. sits at historically low levels, with only 6.8% of workers in the private sector belonging to a union.

“We did whatever it took to connect with those workers to make their daily lives just a little bit easier. A little bit less stressful,” said Smalls, who was fired in 2020 for what Amazon says was a violation of workplace safety policy when he led a walkout to protest unsafe working conditions amid the ongoing pandemic. “We were that light at the end of the tunnel when [workers] got off [the bus] and saw us right there at that bus stop having a bonfire and lighting up s’mores. We were right there for them every day, and I think that resonated with the workers.”

“We’re disappointed with the outcome of the election in Staten Island because we believe having a direct relationship with the company is best for our employees,” wrote Amazon in a statement about the results. “We’re evaluating our options, including filing objections based on the inappropriate and undue influence by the NLRB that we and others (including the National Retail Federation and U.S. Chamber of Commerce) witnessed in this election.”

Smalls said that he’s heard from workers at 18 additional Amazon facilities in several different states who are interested in unionizing. “Workers are reaching out to us, and we want to help every single person we can,” he said.

Next month, a second Amazon facility in New York — the LBJ5 sortation center on Staten Island — will hold a union election to join the ALU. The election will occur the week of April 25 and the count will start on May 2.