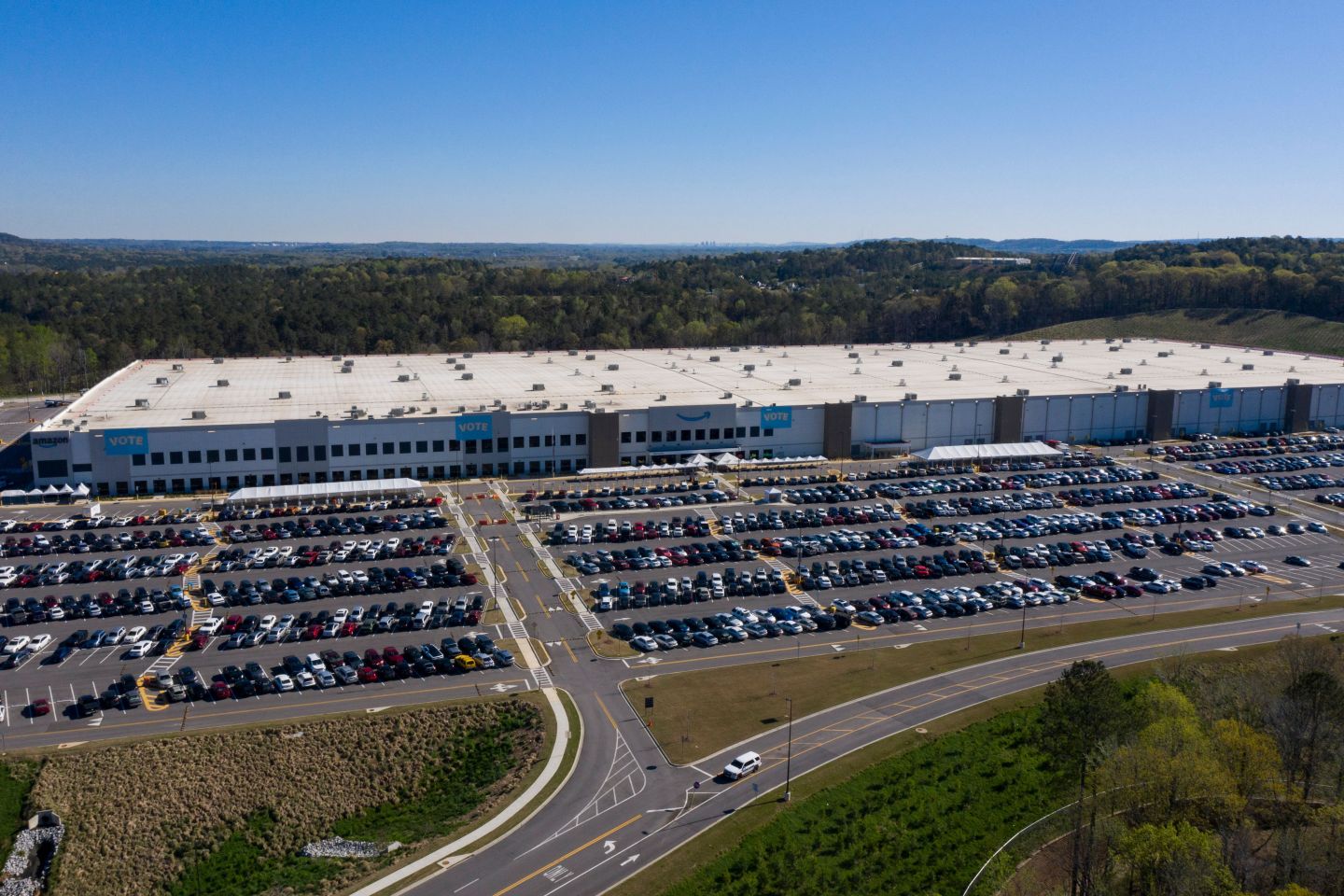 An aerial image shows the Amazon.com, Inc. BHM1 fulfillment center on March 29, 2021 in Bessemer, Ala. Votes are set to be counted on March 29, 2021 on whether to create the first Amazon union in the United States, at a warehouse in Alabama, after a historic, five months-long David vs Goliath campaign.
Patrick T. Fallon—AFP/Getty Images

Amazon workers at a warehouse in Bessemer, Ala., known as BHM1 might not know the outcome of their second election to join the Retail, Wholesale and Department Store Union (RWDSU) for days.

The National Labor Relations Board began tabulating votes Thursday afternoon. After all ballots were accounted for, the final results remained in limbo as a substantial portion – 416 – were challenged by either party.

According to NLRB rules, a union or employer can challenge a ballot for a variety of reasons, including improper job classification, ineligibility based on dates of employment, or physical ballot issues.

So far, the results have found that 875 workers voted in favor of the union and 993 voted no. Of the over 6,143 workers at the warehouse eligible to vote, only 2,343 cast ballots, 38% of the workforce. There’s only a slim margin of workers who voted “no,” and the challenged ballots could still change the outcome of the election.

Jennifer Bates, an Amazon worker who’s been with the company since May 2020, said in a press conference after the vote count that the low turnout was a result of Amazon’s anti-union campaign. She said tactics included “captive audience” meetings designed to sway workers against voting “yes.”

“Those meetings are designed to manipulate and intimidate employees,” said Bates. “That’s why a lot of employees decided not to vote, because they were afraid they were going to lose their jobs.”

Amazon has argued those meetings are educational: “It’s our employees’ choice whether or not to join a union. It always has been. If the union vote passes, it will impact everyone at the site, which is why we host regular informational sessions and provide employees the opportunity to ask questions and learn about what this could mean for them and their day-to-day life working at Amazon,” said Amazon spokesperson Kelly Nantel in a statement provided to Fortune.

Workers at BHM1 voted overwhelmingly against unionizing during their first election in March 2021. The NLRB ruled that Amazon interfered to a significant degree and ordered a new one. Mail-in ballots were collected in February and March and due last Friday.

“What we do know is that this moment is historic, and the workers in Bessemer, Ala., have inspired working people all over the country — and all over the world — to fight for change at their workplaces, including other organizing [activity] at Amazon around the country. This fight is the spark of the 21st century labor movement, and we know it will forever transform how Americans view unions in this country.”

This vote count occurs simultaneously with a drive to organize another Amazon warehouse facility on Staten Island, known as JFK8, where workers started voting last week on whether to join the Amazon Labor Union (ALU). ALU is an independent labor union led by Christian Smalls, a former worker who was fired at the start of the pandemic after leading a protest at the facility about unsafe working conditions.

Other union efforts across the country have emerged alongside Amazon workers’, including campaigns at Starbucks, REI, the Alphabet Workers Union, Condé Nast, and more.

“People have gotten the courage because of what we stood up and did in Bessemer, Ala.,” said Bates. “Workers in this country deserve more than they’re valued.”