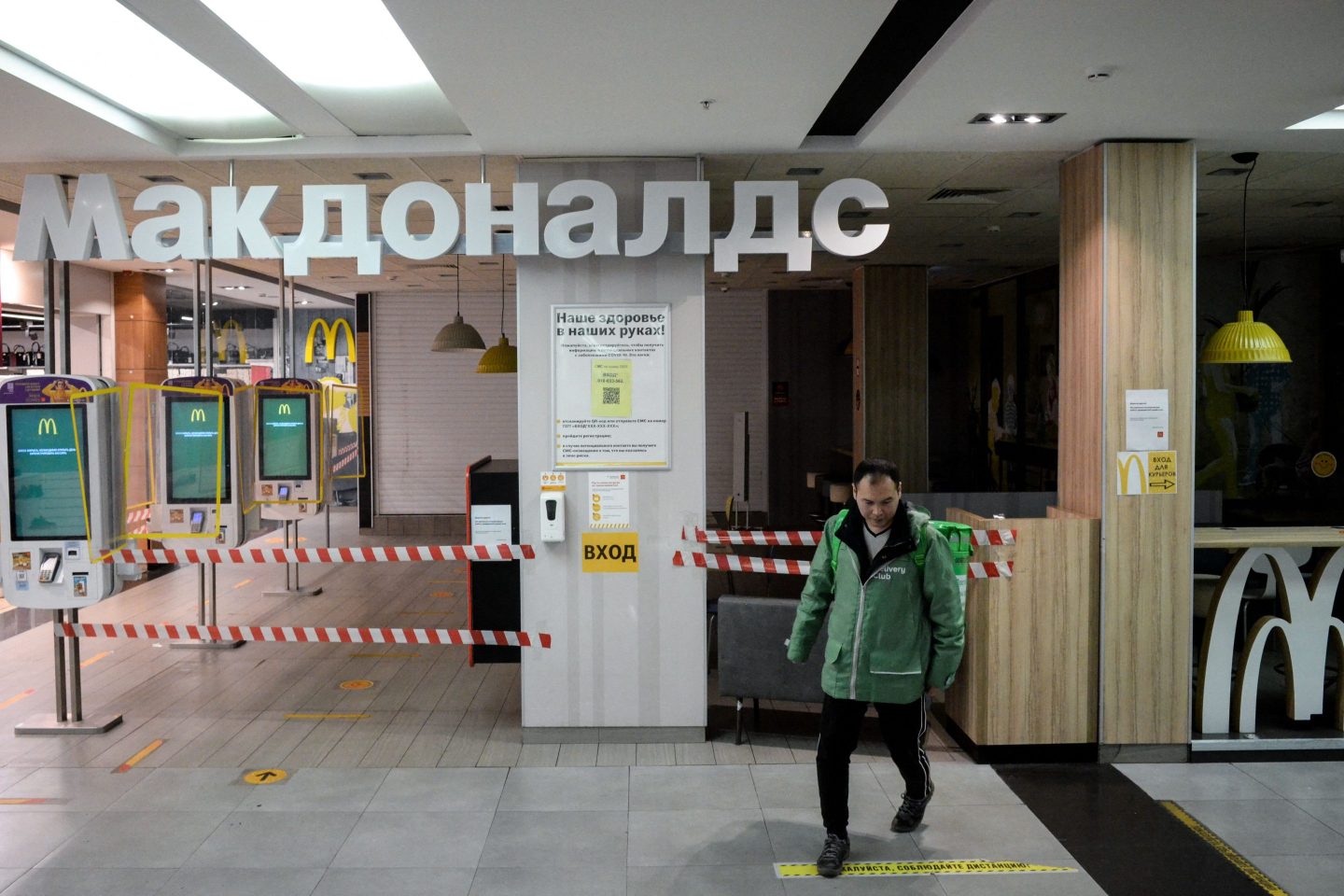 A customer outside a closed McDonald's restaurant at a Moscow shopping mall. A widely shared list of Western companies that have disengaged from Russia has helped CEOs "persuade their anxious, controversy-averse boards to join the stampede of responsible business leaders" leaving the country, the authors write.
AFP via Getty Images

Lists—from school rankings to Oscar nominee lists to Craigslist to Schindler’s List—trigger unexpected impacts. Our recent authoritative categorization of corporate curtailment of Russian business activities, which we first published the week of Feb. 28, differentiated companies that halted their business in Russia from those who threw up a smokescreen by making refugee donations but continuing their business as usual.

This seemed to help catalyze surprising corporate moves, but we needed to provide more clarity, and now our team of analysts is doing so.

We have been told that our list of companies leaving and staying in Russia did provide courageous CEOs with the confidence to execute bold pronouncements. Plus, it reinforced prospectively courageous CEOs with the peer affirmation they sought, offering “benchmarking” to help them persuade their anxious, controversy-averse boards to join the stampede of responsible business leaders pulling out of Russia.

Finally, our list provided a much cited “hall of shame” that guided the voices of employees, customers, and investors seeking to show their disapproval. In fact, the first day our list appeared on CNBC, many of the companies we identified as remaining in Russia saw their stocks drop 15% to 30%, on a day where the key market indexes fell only two to three percent.

But we acknowledge that our list smoothed over some of the complexities related to these companies’ exits from Russia. Based on feedback from countless readers from around the world, we’ve refined our initial dichotomous “naughty and nice” list into four more precise categories. As of early March 17, those categories broke down as follows:

3) Reducing Activities: 74 companies scaling back some but not all operations and/or delaying investments.

4) Economic Collaboration: 34 companies digging in, defying demands for exit or reduction of activities.

While the companies in category #1, withdrawing all business, deserve special commendation, it may be simpler for some companies in more “asset-light” sectors to sever ties immediately. Thus, most lawyers, consultants, accountants, sports leagues, and technology service providers have been quicker to act than some capital-intensive industrial companies or retailers with large local workforces. Of course, the firms that are divesting massive assets, such as BP, Exxon, and Shell, deserve great recognition.

Many of the companies in category #2 have suspended all operations but stopped short of permanent withdrawal; this group includes automobile and tech companies with large sales teams in Russia, as well as investment-intensive manufacturers and brick-and-mortar retailers. Hesitant to fully dismantle their Russian operations, these companies continue to pay their local workers to maintain good relations with the Russian citizenry.

Some of their cautious attitude was admirable; it was anchored in loyalty to dedicated workers and a concern for their well-being. It also represents a cognitive time-warp, however, as this was the utopian strategic mindset of the bygone 1990s Perestroika age. The careers of this generation of leaders advanced with the idealistic spirit of globalization, when Western brands such as Levi’s, McDonald’s, Pepsi, Coke, and Starbucks were symbols of liberation and freedom to Russians linking East and West together in a harmonious world—a world that is no more.

This context makes the smokescreen, window-dressing “withdrawals” of the companies in category #3, which have postponed unspecified future investments or suspended advertising while continuing substantive business operations, particularly disappointing.

But in truth, there are few ways for Western pharma companies to gauge what is being produced and for what purposes by their Russian subsidiaries. Hitler had a history of tampering and redirecting domestic R&D facilities—and it is all too easy to imagine Putin someday following the same playbook on bio-warfare, just as he is following the Hitler playbook in crimes against humanity and targeting of innocent civilians.

Likewise, consumer goods stalwarts such as Carlsberg, Danone, General Mills, Kellogg, Kraft-Heinz, Mars, Mondelez, Nestle and Pepsi are hesitant to cut off the supply of so-called essential items such as baby food, diapers, and chocolates. But the “essential” label rings hollow: Although Oreo Cookies, Cadbury, and Dannon’s Cheesecake Yogurt may be sacred household items for many of us, they are hardly necessities of life.

Others in category #3 cite logistical challenges. Dunkin Donuts, Papa John’s, and Yum Brands are among the franchised food chains that have paused corporate support of Russian locations—yet Russian franchisees have kept many locations fully operational. Not every restaurant chain has the luxury of McDonald’s, which directly operated 85% of its 847 locations in Russia. But as Starbucks demonstrated in their attractive buyout of franchisees, a lack of action reflects a lack of will, not a dearth of options.

There are also the commodities traders such as Bunge, Cargill, and Trafigura who argue that suspending operations in Russia would debilitate world supply chains in essentials such as wheat, corn, and nickel; financial institutions who snap up depressed Russian bonds while supposedly winding down operations; manufacturers loath to suspend production across heavy industry plants throughout Russia; and large professional service firms who have only suspended service for the Kremlin, lagging behind peers who have exited completely.

But worst of all are the companies in category #4 that continue in Russia unabated. Oil servicers such as Halliburton and Schlumberger remain economic collaborators despite U.S. sanction. I met Jean Riboud, the legendary former Schlumberger CEO who over several decades built Schlumberger into being the largest in the industry, a company that under his leadership was considered the best managed firm in the world. A Buchenwald Holocaust survivor and fighter in the resistance against the Nazis, Riboud, who died in 1985, would not recognize his firm today.

Tech companies such as Citrix and Cloudflare claimed they were hesitant to cut off Russian network access because of humanitarian commitments—implying that peer tech leaders Oracle, Dell, IBM, Apple, HP, Xerox, Meta, Alphabet, and Twitter were less humanitarian in their own bold early exits.

Perhaps most paradoxical of all are the brand experts. Most of the major advertising agencies, including Interpublic Group, Publicis, Dentsu, and Leo Burnett, missed the moment, reluctant to cut ties even though top consulting firms McKinsey, BCG, and Bain, the Big 4 accounting firms, and top law firms have all exited. Amazingly, accountants, engineers, lawyers, and consultants showed more sensitivity to the outrage of geopolitical experts, government officials, Ukraine victims, investors, employees, and clients than the supposed opinion experts. Yes, perhaps brand advisors need a tutorial about brand management from their own clients.

Oppressive governments in India, Romania, Poland, East Germany, South Africa, and Ukraine were brought down in bloodless coups amid the stalling out of civil society. As we watch the slaughter of thousands of innocent civilians, economic blockades are surely better than bombs and bullets. Companies that remain engaged in Russia have unconsciously echoed the strategic defense of those German executives from Hoechst AG I.G. Farben, and Flick convicted at Nuremberg or the misguided leaders of Woolworth’s, Texaco, Royal Dutch Shell, and others for their “constructive engagement” with Hitler’s Germany into the Second World War.

Just today, one of us was told by General David Petraeus that “we in the defense world use your list diligently as guidance. I cannot fathom why any of these companies are remaining in Russia helping the evil empire. It is indefensible and gravely troubling”.

As Charles De Gaulle advised in 1941, “At the end of our sorrow, there is the greatest glory of the world, that of the men who did not give in.” The leadership and constituencies of at least 400 global companies should feel great pride in their Russian exits. Then there are those other 34.

CORRECTION: An earlier version of this article erroneously included WPP among the advertising agencies that had not cut ties with Russia.