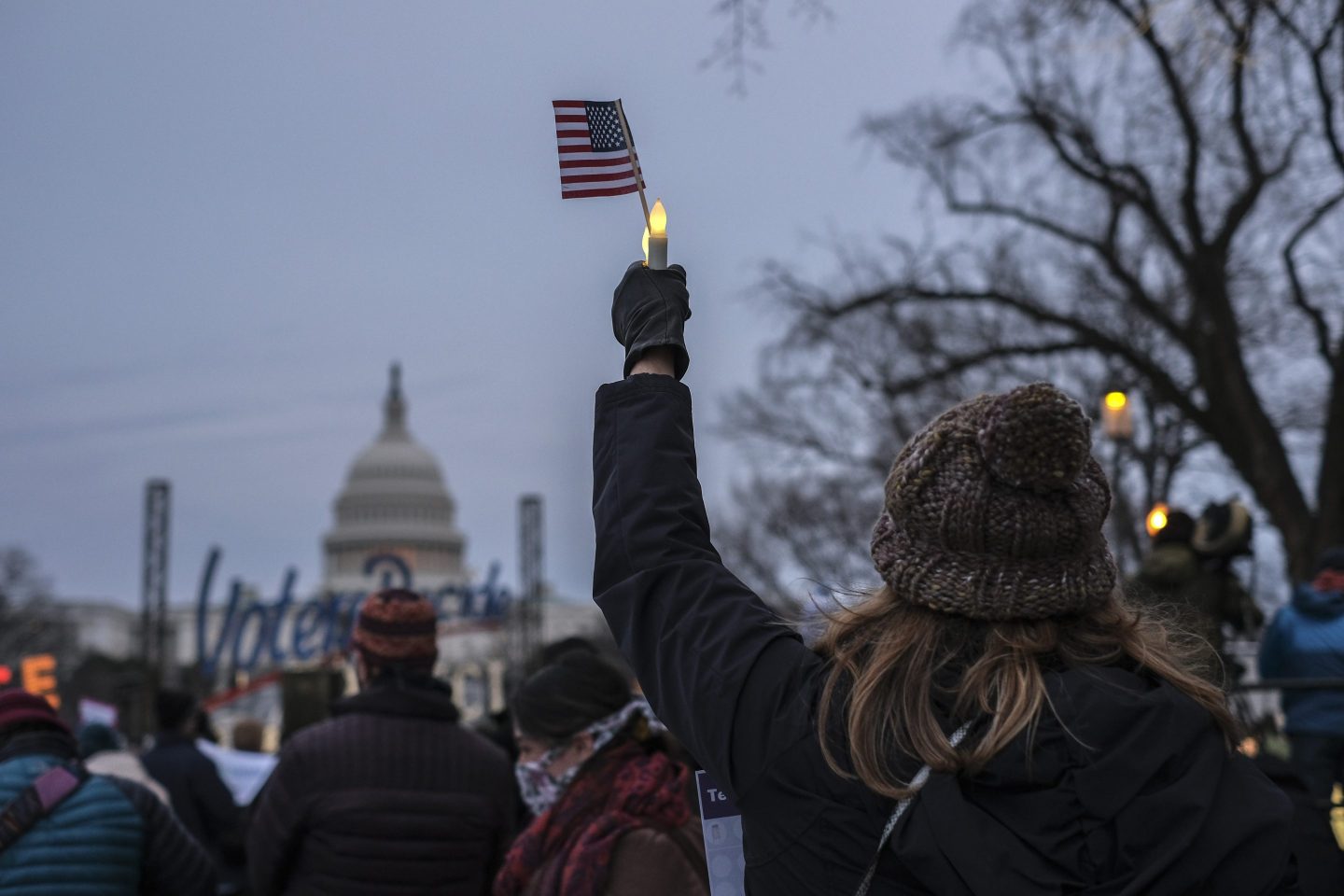 Rather than corporations being the big spenders, it is individual contributions that have soared to 87% of total congressional campaign funding.
Photo by Probal Rashid/LightRocket via Getty Images

Business leaders are clearly not buying the continuing narrative from many political leaders that efforts to overturn American democracy after the last election were “legitimate political discourse.” Newly released Federal Election Commission filings this month, now encompassing the entirety of 2021, show that all 93 of the incumbent members of Congress who failed in their constitutional duties to confirm the certified ballots of the Electoral College have suffered a major plunge in business support.

We’ve seen a resurgence of whining from cynical media about companies that let expire last year’s pledges to halt donations to these “objectors” in Congress. But the chorus of corporate critics has missed the forest for the trees. According to the new FEC filings, total corporate giving to those objectors fell a staggering 60% from calendar year 2019, the equivalent stage of the last election cycle. Putting this in context: All corporate political spending on Congress is down 28%; corporate support for GOP non-objecting members of Congress slipped that same 28%; and corporate giving to Democratic members of Congress fell just 19%. Thus, while businesses have lost some interest in supporting congressional campaigns in general, by this measure they are three times more wary of assisting objectors.

Leaders of the insurgency have been hit particularly hard, with Josh Hawley down 79%, Ted Cruz down 95%, Matt Gaetz down 97%, and Mo Brooks also down 97%. Even the influential House GOP leaders Kevin McCarthy and Steve Scalise saw their corporate donations decline, by 60% and 70% respectively.

These facts will be upsetting not only to GOP objectors, but also to the business reporters and voting rights groups so eager to wrongly condemn business as the spigot to sedition. A self-styled watchdog called Citizens for Responsibility and Ethics in Washington issued a recent inflammatory report titled, The Corporate Insurrection: How Companies Have Broken Promises and Funded Seditionists. Similarly, The Hill recently ran the banner headline “GOP Election Objectors Rake In Corporate Cash,” atop a story in which the publication cited a breathless report from Accountable.US, a liberal lobbying group, reporting that corporations donated $6.8 million spread across 147 objectors. These shrewd accountants at Accountable.US must not realize that this is not even 1% of total congressional campaign donations.

Recently, Los Angeles Times business columnist Michael Hiltzik mistakenly asserted, “It should be obvious that corporations shouldn’t be permitted to make any campaign contributions, because their dollars will always overwhelm contributions from individuals.”

This sounds sensible on its face, but the FEC data reveals the exact opposite is true. Based on our research, not only has the corporate funding of objectors plunged, but total corporate giving has fallen from 20.6% of all congressional donations in 2019 to just 13% in 2021. While total congressional campaign coffers have grown from $989 million during 2019 to $1.2 billion in 2021, only $147 million came from corporations. Yes, rather than corporations overwhelming individual contributions, it is individual contributions that have soared to 87% of total congressional campaign funding.

In fact, we found corporate funding now accounts for a record low percentage of total congressional campaign fundraising. While individual donations as a percentage of total political fundraising have already been on the rise for at least a few decades—from 25% in 1977 to 55% in 1991 to 79.4% in 2019—the trend has markedly accelerated over the past few years, with the resulting climate transforming individual donors into the single most potent force in political fundraising.

The misdirected fire of voting rights groups and media pundits is even more alarming given that substantial funding of the objectors comes not from business at all, but from individuals. Despite losing virtually 100% of their business support, Hawley, Cruz, Gaetz, and their peers have drawn similar or increased support from individuals. The rise of individual donors is not confined to only congressional races. According to OpenSecrets, of the $14 billion spent by all candidates and groups in the 2020 election cycle, only 5% came from corporate PACs. Individual donations made up a vast majority of funding, reinforcing the fact that reformers’ focus ought to be on individual contributions rather than corporate money.

The proliferating ranks of voting rights groups have piled on to the wrong mission. Business leaders have been on the frontiers of immigration rights, sustainability, gun safety, civil rights, and voting rights issues as the loudest and most trusted voices in society. By vilifying business, critics have locked, loaded, and fired upon the wrong targets entirely. The 1930s bank robber Willie Sutton explained he targeted banks “because that’s where the money is.” However, the campaign money is not where the pundits and voting rights groups assumed it is.

The problem may be that the goal of many of these attention-starved groups is to create dramatic, if incorrect, headlines to get more attention as they struggle for recognition and funding. Our recent research has revealed that there are now a dysfunctional overlapping mound of 188 look-alike competing voting rights groups, most created in just the past year, with funding well in excess of $300 million.

Instead of the convenient, incendiary attacks on business, voting rights activists and pundits should take on the less exhibitionist tasks of courting clergy, trade unions, professional associations, pension funds, and campus voices to the cause of fortifying democracy. That more prosaic work of building broad, inclusive coalitions is what produced social change from the 1960s through the 1980s. Reaching individuals through these pillars of civil society taps the actual source of 87% of campaign dollars—individual contributors, not corporations.

Jeffrey Sonnenfeld is a senior associate dean and the Lester Crown professor of management practice at the Yale School of Management, and author of Firing Back: How Great Leaders Rebound After Career Disasters (Harvard Business Review Press) and The Hero’s Farewell (Oxford University Press). Follow him on Twitter.