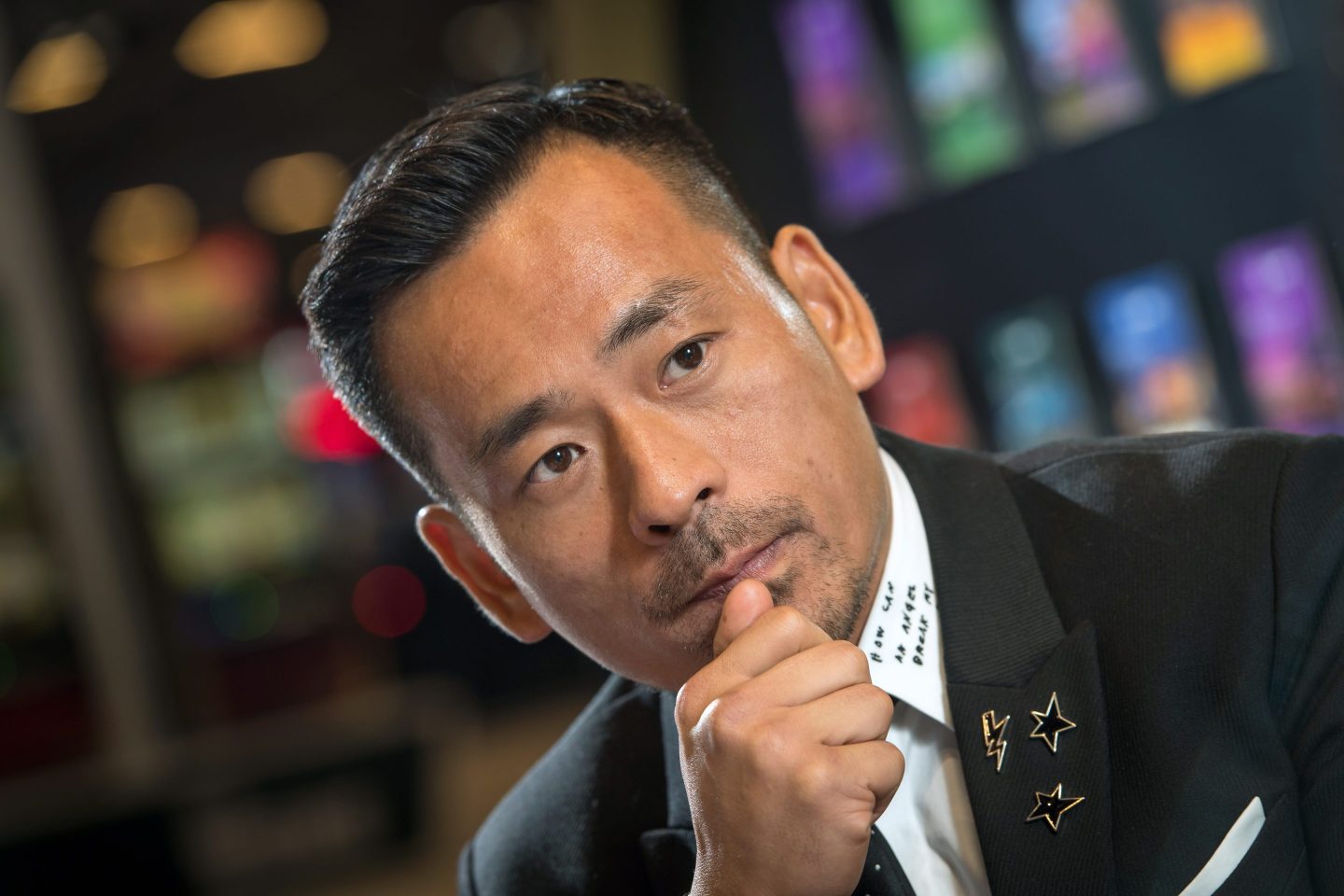 Alvin Chau, founder and chairman of Suncity Group Holdings Ltd., listens during an interview during the Macau Gaming Show (MGS) at the Venetian Hotel in Macau, China, on Nov. 14, 2017.
David Paul Morris—Bloomberg via Getty Images

High rollers scurried away from the baccarat tables in Macau on Friday following reports that authorities in the eastern Chinese city of Wenzhou had issued an arrest warrant for Alvin Chau, boss of the biggest operator of VIP “junket” tours to the gambling hub’s casinos.

Macau police detained Chau for questioning on Saturday. On Sunday, they announced that they had arrested a 47-year-old Macau businessman surnamed Chau and 10 others on charges of money-laundering and using Macau as a base to set up a cross-border “live web betting platform” in the Philippines that lured customers from China’s mainland where gambling is strictly forbidden.

On Monday, stock of Suncity Group Holdings, of which Chau is CEO, was suspended on the Hong Kong Stock Exchange; shares of Macau casino operators—including MGM China, Sands China, and Wynn Macau—tanked. This morning, when shares of Suncity’s listed arm, which doesn’t include its junket operation, resumed trading in Hong Kong, they plunged 40%. Chau hasn’t been seen in public since his arrest; the company said in a filing that he intends to resign.

Chau’s arrest has renewed fears that, after a year of rolling crackdowns that have devastated sectors including e-commerce, ride-hailing, online tutoring, and online gaming, China’s rulers are coming after Macau’s casinos next.

Chau’s arrest is not the first sign Beijing has Macau’s casinos in its regulatory cross-hairs. In September, the former Portuguese colony, at Beijing’s behest, unveiled a plan to increase regulatory oversight of the sector. Announcement of the new rules wiped out $17 billion in Macau casino stocks’ market capitalization in a single day.

Macau’s gambling industry contributes over half the city’s GDP, about 80% of its tax revenue, and employs 17% of its residents. Chinese leaders have long said they want to reduce the city’s reliance on the industry, but it remains unclear how they’ll achieve that goal.

In 2019, Macau’s 41 casinos generated about $36 billion in revenue, six times the take of 144 casinos in Las Vegas. But Macau has been pummeled by the pandemic.

The Journal reports that Macau’s gambling revenue in the first 10 months of 2021 was barely a third of pre-pandemic levels. The city has benefited from the gradual return of mainland visitors. According to the Financial Times, gambling revenues from Las Vegas, where there are few COVID restrictions, are starting to catch up with those of Macau.

Authorities in Wenzhou allege Chau ran a crime syndicate that included nearly 200 shareholders and 12,000 middle men who built up a network of more than 80,000 Chinese gamblers. They claim the group created asset management firms to help gamblers with cross-border transfers and recover unsettled debts. Charges by mainland authorities are separate from those brought against Chau by police in Macau, which has a nominally independent judiciary system. But on Saturday, the Macau government stressed its determination to cooperate with mainland authorities. “The Macau Special Administrative Region reiterates that all employees of the gambling industry must strictly abide by national and Macau’s related laws.”

The FT quotes an upbeat senior executive at a U.S. casino group who expresses confidence that Beijing will ultimately see Macau’s gambling industry as a “necessary evil.” But, in an era when mainland leaders strictly regulate how many hours children can play video games, it is perhaps more remarkable that Macau’s baccarat tables have been allowed to flourish for so long.

This edition of Eastworld was curated and produced by Yvonne Lau. Reach her at yvonne.lau@fortune.com

On Monday, Chinese vaccine maker Sinovac said in a statement that it’s ready to produce Omicron-specific vaccines “if necessary… [and] production is not an issue.” The vaccine’s technology and production processes will be the same, and research can be conducted “very quickly after isolation of the strain,” the company said. But it will only proceed with such efforts when there’s evidence that a reformulated vaccine is necessary—and only after regulatory approvals are given. Sinovac and other global vaccine makers are now studying Omicron-related data to understand its interactions with available vaccines. Chinese President Xi Jinping has also pledged to supply 1 billion additional vaccines to African nations in the wake of Omicron. South China Morning Post

Asian economies will likely face a “limited” economic fallout from the Omicron variant, owing to their high vaccination rates, according to investment bank Morgan Stanley. The bank, in a Monday note, said that the new variant may pose an immediate short-term risk to economies in Asia—with consequences to be most visible in the first quarter of 2022, “depending on the evolution of the outbreak.” Morgan Stanley predicts a 1.9% quarter-on-quarter growth for Asia in the three months to December. But the bank’s predictions are based on one major caveat: that Omicron proves to be “not more challenging" than the highly-contagious Delta variant. Fortune

China’s November manufacturing PMI ticked up to 50.1 up from 49.2 in October—the first expansion in two months—owing to easing power supply shortages and significant price drops in some raw materials. The Omicron variant could also boost China’s manufacturing output and export profits by keeping foreign demand for Chinese exports elevated for longer—though foreign export demand will likely normalize when the pandemic subsides. Fortune

Chinese security officials in Henan—one of China’s largest provinces—have commissioned a surveillance system to track groups it deems “suspicious,” like journalists and international students, according to a Reuters report. Documents reviewed by Reuters showed that Henan authorities published a July tender that sought a company to build a system using 3,000 facial recognition cameras to compile files on persons of interests traveling to Henan. The authorities awarded the contract to Chinese tech firm Neusoft. Reuters wasn’t able to identify whether the system is currently operating and hasn’t found any documents showing that journalists and foreigners are surveillance targets in other parts of the country. Reuters

Nissan – Japanese carmaker Nissan announced on Monday that it will invest $17.6 billion in the next five years in a bid to accelerate its vehicle electrification push. Nissan—one the country’s top three automakers—also unveiled a comprehensive electrification plan for the first time ever, which will see the company launch 23 electrified vehicles by 2030 (including 15 electric vehicles) and cut lithium-ion battery costs by 65% in eight years.

CoinDCX – India’s CoinDCX—the country’s first cryptocurrency unicorn valued at just over $1 billion—plans to go public as soon as government regulations allow crypto firms to do so, said company co-founder Neeraj Khandelwal to Bloomberg TV on Monday. An IPO would “give legitimacy to the industry… like the Coinbase IPO gave a lot of confidence in the crypto markets,” he said. India’s government is currently preparing a bill to regulate cryptocurrencies as the country’s central bank calls for a ban on all private cryptocurrencies.

Nio – Chinese electric vehicle maker Nio announced last Friday its expansion plans into five European countries by next year; it didn’t specify which markets. NYSE-listed Nio entered the Norwegian market this year—its first international market expansion outside of China—where it is selling a European version of the ES8, its flagship electric SUV. Nio said its 2022 European expansion is part of its brand development strategy geared towards targeting eco-conscious drivers.

Ride-hailing guidelines – Chinese regulatory agencies on Tuesday unveiled a new set of guidelines for ride-hailing firms citing the need to protect ride-hailing drivers and users, mere days after it ordered homegrown ride-hailing giant Didi to outline a plan to delist from the New York Stock Exchange. The agencies–which includes China's public security bureau, transport ministry and antitrust regulator–warned such firms against improper use of user data and ordered the companies to implement "reasonable" commissions and social insurance for drivers.

In the wake of the new Omicron variant, Hong Kong—which already has one of the world's strictest border control policies—has tightened its international travel restrictions again. On Monday evening, Hong Kong officials added nine countries—Australia, Austria, Belgium, Canada, the Czech Republic, Denmark, Germany, Israel and Italy—to its list of "high risk" countries, meaning that returnees from such places must undergo a 21-day hotel quarantine (instead of 14) and six COVID tests during the three weeks. The Chinese territory on Saturday also banned non-residents from eight African countries—including South Africa, Botswana and Zimbabwe—from flying into the city.