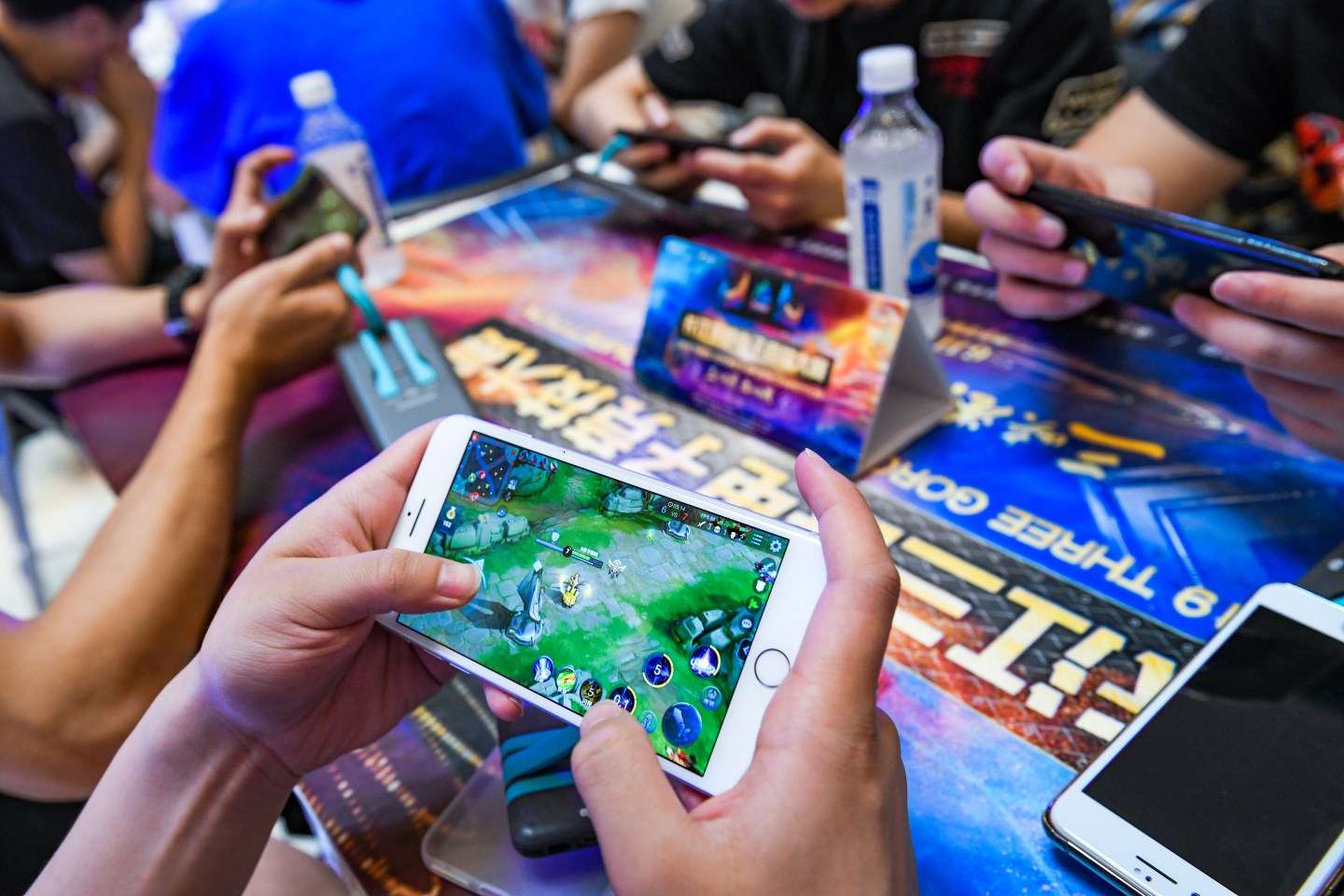 A gamer plays Tencent’s Honor of Kings during an e-sports tournament in Chongqing, China, in 2019.
Zou le—Oriental Image/Reuters Connect

At 3 a.m. on Sept. 6, a gamer, somewhere in China, achieved perfection.

The person pulled off a streak of five kills in quick succession—known as the penta-kill—in social media giant Tencent’s hit mobile game Honor of Kings. The battle game pits five users on one team against five players on another. One player taking out all five opponents with no help from teammates requires a LeBron James–level mastery of the craft.

A fellow player noticed that the penta-killer’s account belonged to a 60-year-old—gaming profiles in China display birth years—and posted it on China’s Twitter-like Weibo. The post went viral, and Weibo users concluded that the skilled gamer was likely not a 60-year-old at all but rather a kid who had swiped a relative’s phone.

Had the penta-kill scenario played out in any other country, the online speculation would have been harmless. In China, it triggered an investigation.

Tencent said the gamer’s profile had passed 17 facial recognition age checks this year. Still, it couldn’t definitively conclude that a sexagenarian had executed the penta-kill, and therefore couldn’t rule out that the player had violated draconian video game laws that China had made even stricter on Sept. 1. The new rules say those under 18 can play online games for three hours a week, between 8 p.m. and 9 p.m., only on Fridays, Saturdays, and Sundays, and additionally on public holidays—not at 3 a.m. on a Monday, as the penta-killer had.

Tencent’s apologetic reaction to its gamer’s moment of glory reflects a deeper conflict. China’s government and its gaming industry have long had a love-hate relationship. The Chinese Communist Party has supported gaming companies for the technological prowess they represent while simultaneously blaming games for tainting the minds of its youth.

Today, China’s $44 billion gaming industry is the world’s largest, $2 billion bigger than No. 2’s, the U.S., according to Newzoo research. But the new restrictions indicate that Beijing is willing to sacrifice the industry’s economic upside to achieve President Xi Jinping’s chief priority: exerting more social and economic control by reining in China’s powerful tech giants and snuffing out societal trends like celebrity worship, “effeminate men,” and, yes, gaming that may undercut productivity and reverence for the state.

In the early 2000s, Beijing’s contradictory stance toward video games was on full display. State media criticized the addictive nature of games, blaming them for truancy and crime. At the same time, the government hosted gaming conferences to lure foreign investment in the industry.

Beijing’s first major video game regulation arrived in 2000 when it banned consoles like Sony’s PlayStation, decrying them as a negative influence on children. But with consoles off-limits, users simply turned to online games, which were just starting to boom.

The rise of the smartphone made video games even more accessible, putting hit titles and the giants behind them—namely, Tencent and NetEase—into hundreds of millions of pockets. For years, mobile gaming went relatively unchecked, and usage ballooned. China has 727.2 million gamers, Niko Partners estimates: 94% of them play on smartphones and 15% are under 18.

Not only is China’s gamer population enormous, it’s also incredibly active. Chinese state media say 62.5% of Chinese minors play online games and 13.2% of them play for more than two hours per weekday. A recent survey of 4,000 adult gamers in eight countries found that those in China played the most, four hours more per week than the global average, according to cloud services firm Limelight Networks. Free-to-play games and popular features like for-purchase “loot boxes” fuel engagement in China, says Daniel Ahmad, an analyst at Niko Partners. So, too, does the special place video games hold in social life, especially among adolescents. Chinese parents often cite Honor of Kings as a main means of socialization for their children and say their kids learned of the game via friends on WeChat, Tencent’s ubiquitous messaging app that connects gamers with one another.

“Not only do teens forge and maintain essential peer associations through online gaming,” says Trent Bax, an associate professor of sociology at Ewha Women’s University who studies online gaming in China, “but gaming is also an important avenue through which they relieve stress.”

Beijing wishes that wasn’t the case. In 2017, an editorial in People’s Daily, the mouthpiece for the Chinese Communist Party, called Honor of Kings “poison” to children. Mobile gaming as a whole, it said, needed stricter supervision. The next year, the government centralized video game approvals and regulations under the Communist Party’s Propaganda Department, a sign that Beijing recognized the power of gaming—as a threat to its rule and a possible means of party messaging. “Given that online gaming is such a big thing for young people in China today … the Party wants to think really carefully about what is going into their brains,” says Anne-Marie Brady, Chinese politics professor at the University of Canterbury.

The Party wants to think really carefully about what is going into [young people’s] brains.

Anne-Marie Brady, professor at the University of Canterbury

The rules instituted in 2019 cut minors’ daily playtime to 1.5 hours on weekdays and three hours on weekends, created content guidelines that banned gory images like blood, promoted Chinese culture, and said gambling-like features such as loot boxes must be labeled with the odds of winning.

But that same year, China’s National Bureau of Statistics officially classified e-sports as a professional sport. In 2020, municipal governments in Shanghai and Beijing introduced subsidies and promotional campaigns to further develop e-sports. China’s state-run broadcaster aired a glowing six-part documentary on e-sports last year, and universities across the country have rolled out majors related to online gaming.

“On the one hand, the government has celebrated and promoted online gaming, e-sports, and techno-culture more generally as symbolizing China’s technological development and modernization,” says Bax. “On the other hand, [it has] cultivated a social discourse of anti-gaming, with ‘Internet addicted’ teens stigmatized because they are said to threaten ‘social stability.’ ”

But the latest rules introduced this September suggest Beijing’s stance is becoming less ambivalent, which Brady attributes to Xi’s renewed interest in “micro-controls.” Social campaigns like “lying flat” are also pushing back against state influence. Since May, the lying flat movement, popularized on Chinese social media, has encouraged youth to reject modern pressures to succeed in school and work at all costs and instead engage in unproductive activities like gaming.

Beijing has highlighted what it sees as the social ills of video games, but the new rules also align with the government crackdown on Big Tech that started when Beijing scuttled the blockbuster IPO of Ant Group, Alibaba’s fintech affiliate, last year. The ongoing regulatory campaign has ensnared gaming giants like Tencent and NetEase; each company’s shares are down 40% from peaks earlier this year. In August, NetEase delayed the planned IPO of its music arm. In July, regulators blocked the $3 billion merger of Huya and DouYu, two game-streaming platforms that Tencent partly owns. Tencent rolled out widespread facial recognition checks on games earlier this year to appease regulators, a practice that’s likely to become an industry standard, Ahmad says.

Beijing’s reach is burrowing deeper into other aspects of daily life, too. In September the government denounced Internet celebrity fan clubs as cultlike; it said only “masculine” male role models should appear on TV and in video games; and it launched online rules to create a more “Marxist and civilized” Internet.

“Xi is reaffirming control over every sector that can shape the mind or thinking of China’s population, particularly its young people,” says Steve Tsang, director of the SOAS China Institute at the University of London.

In its anti-gaming crusade, Chinese state media has targeted Tencent’s Honor of Kings by name, calling it “poison.” The battle game was China’s top-grossing mobile title of 2020 and is nearing $10 billion in player spending globally, an all-time high.

This article appears in the October/November 2021 issue of Fortune with the headline, “China to teens: Game over.”