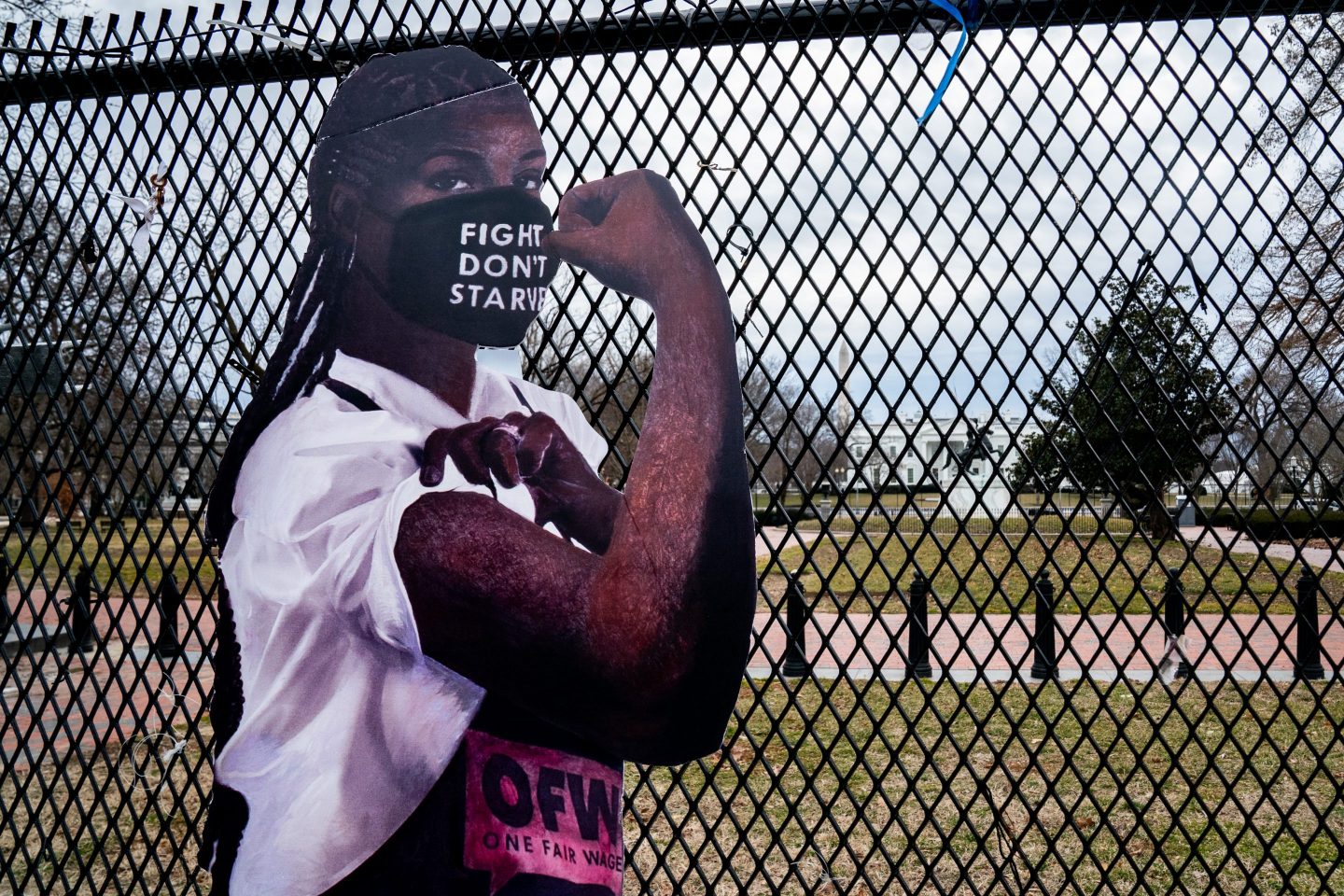 A poster demanding a higher federal minimum wage. While recent wage hikes by retailers and restaurants "are necessary and a step in the right direction, $15 an hour is not a living wage for most Americans," the authors write.
Erin Scott—Bloomberg/Getty Images

As we mark Labor Day, an occasion that celebrates workers, the country is in the throes of what some consider a labor shortage. After widespread recognition of the risks frontline workers undertake and the protections they need, companies in traditionally low-wage industries are struggling to hire, and workers are leaving jobs at record rates.

Plenty of hand wringing and spilled ink over the last several months highlights the difficulty companies are experiencing in replenishing their workforces. Astonishingly, there’s one notion in this discussion that has gotten shockingly little attention: If we want people to come back to work, we should pay them a living wage.

A living wage is the amount of money needed for a given worker and their family to cover the cost of their minimum needs where they live, including food, childcare, health insurance, housing, transportation, and other necessities like clothing and personal care items.

Companies are making headlines by announcing they are raising entry wages to attract workers and keep up with their peers. In light of the proposed federal minimum wage increase, some have made $15 an hour their starting offer. While these wage hikes are necessary and a step in the right direction, $15 an hour is not a living wage for most Americans.

A majority of Americans surveyed by JUST Capital and The Harris Poll want companies to prioritize a living wage, not only as a strategy for navigating today’s tight labor market but, over the long term, to be an employer of choice. The facts are clear: A living wage is a legitimate starting wage and what employers should look to as an entry point. Yet a living wage feels more like an aspirational concept than a just income for all Americans. We discuss the minimum wage, but we leave a living wage out of the conversation. Neither the current minimum wage, at just $7.25 an hour, nor the proposed $15 an hour reflects what people need to get by.

In a speech on Depression recovery measures, Franklin Delano Roosevelt stated bluntly: “It seems to me to be equally plain that no business which depends for existence on paying less than living wages to its workers has any right to continue in this country…and by living wages, I mean more than a bare subsistence level, I mean the wages of decent living.” For decades, our country has recognized that employers are responsible for ensuring workers aren’t just scraping by on their pay.

Today, with tools like MIT’s Living Wage Calculator, we can put a dollar amount on what it takes for individuals to earn a “decent living” in every county in the country. But this information is typically not leveraged by corporate America when establishing pay practices. By benchmarking against market competitors and median pay rates, corporate HR departments wind up setting pay too low, and executives doesn’t realize their workers are struggling financially. They aren’t talking to their workers and assessing whether they can make ends meet after each paycheck. This disconnect is hurting their business and undervaluing workers’ skills.

Acknowledging that employees are a company’s most important strategic asset, more corporate leaders are stepping up to talk with their workers and evolve their pay practices. PayPal is one: When a 2018 survey revealed that nearly two-thirds of its hourly workers struggled to get by, CEO Dan Schulman was shocked, because the company paid, by previous benchmarks, at or above the market rate. PayPal’s mission was to democratize access to financial services, and Schulman saw firsthand that it was becoming a reality for its customers, but not its employees. PayPal now implements several measures to improve the financial well-being of its workforce and has, ultimately, strengthened its business through enhanced employee engagement and productivity and higher net promoter scores with customers.

Others are following PayPal’s example. Chipotle, Chobani, Even, [hotlink]Prudential Financial[/hotlink], and Verizon recently joined the Worker Financial Wellness Initiative, pledging to assess their workforce’s financial vulnerability and identify opportunities to improve their resilience over the long term.

Paying a living wage is also a crucial component, and an often missing one, for corporate America to follow through on its commitments to advance racial equity. When JUST Capital asked Americans, “What actions are most important to promoting racial diversity, equity, and inclusion in the workplace?” 89% of Black respondents and 84% of respondents overall identified a commitment to pay all employees a living wage as the top-ranked action. New coalitions like OneTen are starting to spur corporate action on these connections.

But we also need systemic change at the societal level. Companies have policy influence, which they can—and should—leverage for positive change on wages. Drawing from their work to improve wages within their operations, corporate leaders can rally behind the push to increase the federal minimum wage and make it more in line with a living wage going forward.

As the country navigates this latest phase of the pandemic, a living wage should be a critical calculation for corporate America to make. Those companies that will thrive in both the current and post-pandemic economy will be those that prioritize their workers—not just in their rhetoric but in paying them a living wage.

Alison Omens is Chief Strategy Officer at JUST Capital. Amy Glasmeier is a professor in the Department of Urban Studies and Planning and creator of the Living Wage Calculator at MIT.