A tale of two governors: COVID outcomes in Florida and Connecticut show that leadership matters 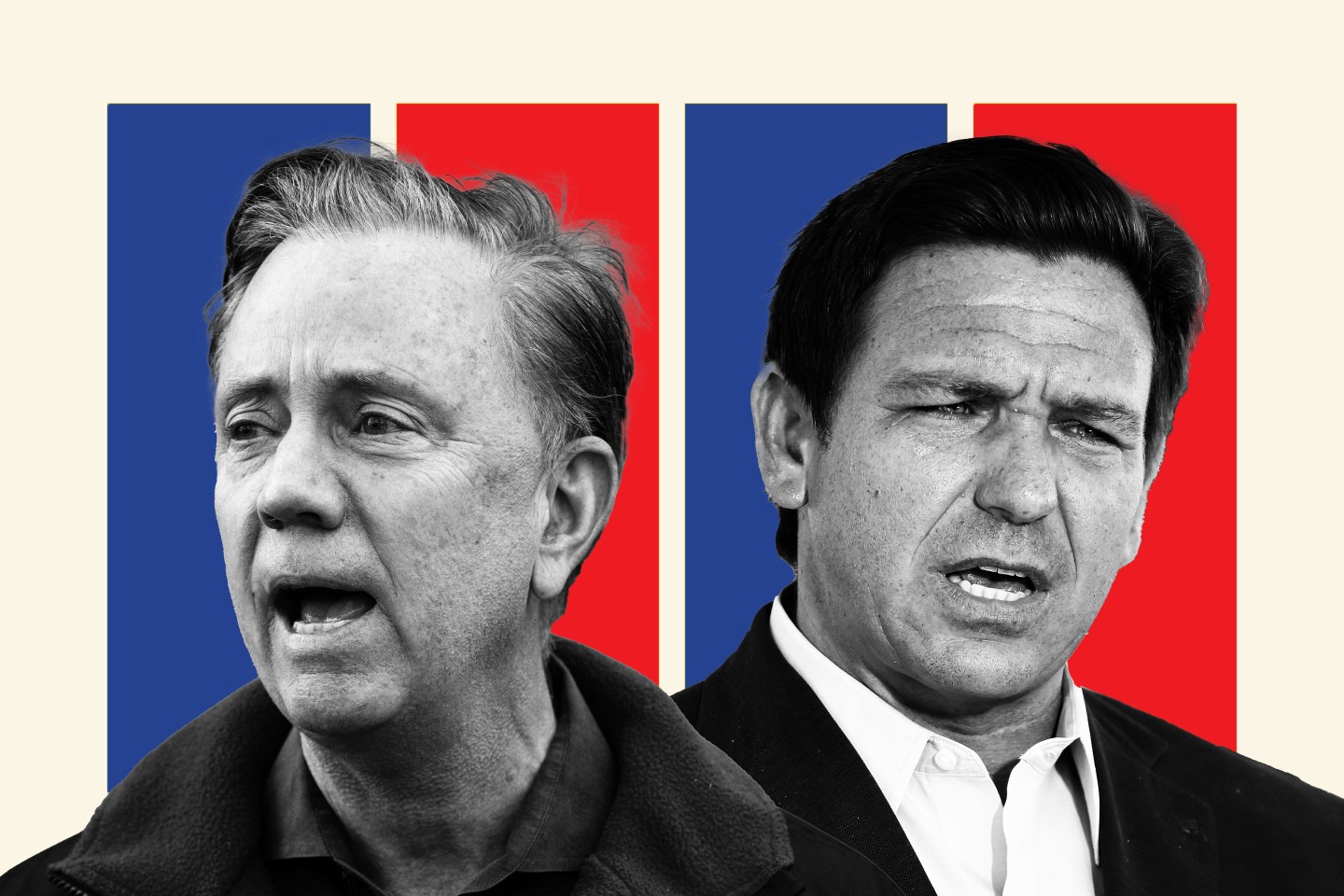 Executive power is often circumscribed by complex geopolitical dynamics, volatile financial markets, disruptive new technologies, and tragic natural disasters. But key leaders still can have a profound impact—positive or negative—on millions of constituents. A comparison of Florida’s and Connecticut’s governors in their contrasting approach to the resurgence of the coronavirus reveals the consequential potential of individual leaders.

This summer, tragic public-health news was exacerbated by historic levels of political grandstanding by several Southern state governors. The rapid spread of the COVID-19 Delta variant was driven by a surge of new cases in Florida, Texas, and Missouri—as these states accounted for an astounding 40% of new U.S. coronavirus cases despite representing only 17% of the nation’s population. Ignoring science and evidence, the governors of these three states have taken a rigid, cynical stance, forbidding vaccine mandates by employers and mandatory indoor mask usage—even in cases where such mandates were intended to protect young schoolchildren ineligible for vaccines.

In Florida, Gov. Ron DeSantis even threatened to cut off funding and educators’ salaries for schools that required protective masks in compliance with Centers for Disease Control and Prevention (CDC) guidelines. Nonetheless, 10 school districts defied DeSantis by issuing mask mandates. Similarly, Disney, Carnival Cruise Line, and Royal Caribbean joined Norwegian Cruise Line in defiance of DeSantis’s ban on passenger vaccination passports, despite being threatened with fines of $5,000 for each such violation of his decree.

Florida’s hospital emergency rooms and intensive care units are now reaching capacity, with 90% of ICU beds occupied, the majority of them by COVID patients. More than 90% of these inpatients are unvaccinated; overall only one-third of Floridians between ages 12 and 64 are vaccinated.

DeSantis’s response to such wide swaths of the unvaccinated Florida population suffering from the highly contagious Delta variant has been to consult with anti-mask advocates who promote the horse parasite drug ivermectin and hydroxychloroquine, unproven elixirs, instead of scientifically developed, safe, and highly effective vaccines.

In contrast, Connecticut Gov. Ned Lamont has been relying on a science-based approach from the outset of the pandemic. He pulled together globally renowned virologists, microbiologists, epidemiologists, and business leaders in March of 2020, just as the pandemic was declared, and kept such advisory panels working to solve problems by relying on science, evidence, and smart management, independent of ideology. Accordingly, he worked with both top Trump administration and later top Biden administration leaders to keep manufacturing flowing without a day’s interruption, ensuring the needed supply of protective material to open schools early. Lamont also catalyzed a new nationwide weekly meeting of the nation’s governors, favoring quiet, effective, bipartisan, cross-sector problem-solving instead of seeking the public limelight.

As Lamont recently explained, “Our reopen committee included the scientists and the big business leaders that we needed to help us, and I’ve tried to do that throughout state government—get a wider variety of people at the table.” He did not mock scientists, intimidate public officials, or threaten business leaders as foils for political grandstanding. This resulted in the nation’s highest or second highest vaccination rates for every age group, from 75% upward—including 90% of seniors—and one of the lowest COVID-19 death rates in the nation (Connecticut is 35th out of 50 by that measure).

This focused approach to problem-solving and collaborative leadership style allowed Lamont to call for vaccine mandates in schools, nursing homes, and for all state employees recently—astoundingly without protest from unions, partisan political leaders of either party, or business leaders. Lamont pointed to heat maps of Southern state infections with overflowing hospitals and declared, “Sadly, in many cases, they have hospitals in different regions who are overwhelmed or close to being overwhelmed. We’re not gonna let that happen in Connecticut, and that is not happening in Connecticut.”

Just glancing at the two contrasting CDC charts of public health outcomes for Florida versus Connecticut below—showing the impact of the same disease, in the same country, over the same time period—illustrates the difference leaders can make. Even though Connecticut was hard hit in the pre-vaccine phase of the pandemic, the post-vaccine outcomes are dramatically different. This difference is not explained by age patterns: The average age in both states is about 41 years old, but the health outcomes of Connecticut residents tower over those of Floridians in every age bracket.

Source: https://covid.cdc.gov/covid-data-tracker. Note that the blue axis in the charts above is not normalized by population and the orange axis has a slightly different scale in the two charts.

As the Delta variant rages across the country, the divergence of health outcomes is especially notable between the Northeast and the South. The map below shows that the divergence between Connecticut and Florida is reflected in a wider region surrounding each state. A year and a half into the pandemic, we have accumulated a great deal of knowledge and experience in designing effective public health responses. The divergence of health outcomes across the country is the result not of differences in the prevalence of the Delta variant, population demographics, access to health care, or environmental conditions; it is attributable at this point principally to differences in leadership.

Leadership matters. Leadership matters not only in determining the effectiveness of government’s response to the public health crisis, but in shaping both individual opinions and the sense of common purpose.

Ideological extremism has caused needless deaths in our country. It is tragic that political differences among the states have resulted in a sharp divergence with respect to health-protective behaviors—vaccination and masking among them. Ideological differences and bitter political rivalries exist in all democracies, and individual attitudes toward vaccination and masking vary widely within all regions of the world, but nowhere else are these attitudes as closely aligned with political ideologies as they have become in the U.S. The U.K., India, and Israel are just three examples: In each country, the pandemic remains a grave danger, but each country’s political cleavages, no less intractable than in the U.S., are largely unrelated to health-protective behaviors. In the U.S., the political reinforcement of resistance to public health measures has hardened individual attitudes, as shown in the chart below, worsening the pandemic and its impact on American lives and the economy.

The contrasting leadership approaches between the governors of Connecticut and Florida are not explainable by educational sophistication: Each governor holds college and graduate school degrees from both Harvard and Yale. The differences are not explained by credentials but rather by competence and character. Ron DeSantis is a smart person cynically willing to play the role of an anti-intellectual for political gain, while Ned Lamont is trying to do his job to save the lives of his constituents, seeking the best scientific knowledge and evidence we have gathered on the pandemic.

As Walt Disney, one of the business leaders who shaped modern Florida, once said, “Courage is the main quality of leadership, in my opinion, no matter where it is exercised.”

Jeffrey Sonnenfeld is a senior associate dean and professor of management practice at the Yale School of Management, where he is president of the Chief Executive Leadership Institute. Follow him on Twitter. Anjani Jain is deputy dean for academic programs and professor in the practice of management at the Yale School of Management.