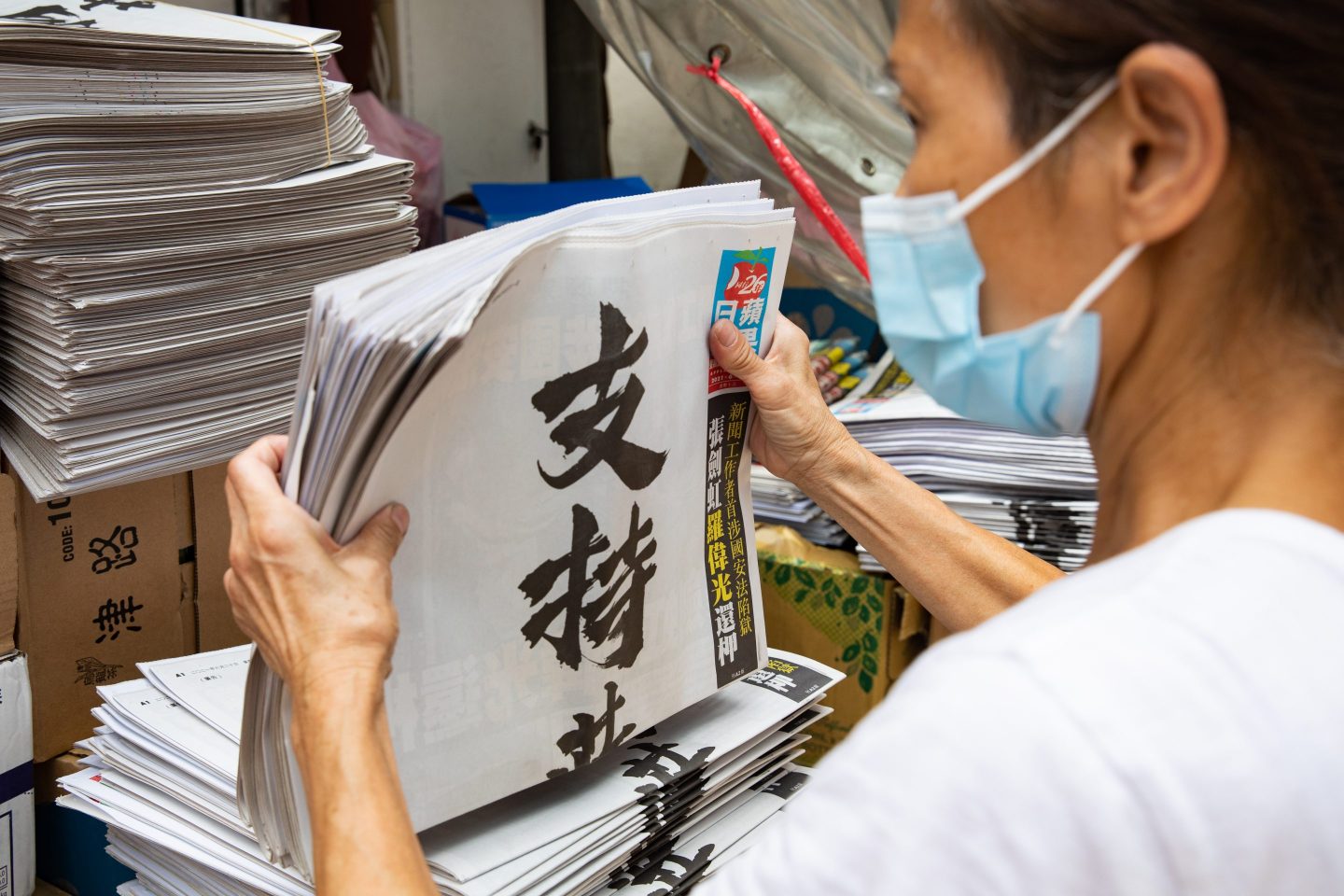 A newsstand vendor arranges copies of Next Digital’s Apple Daily, with a front page advertisement voicing support for the newspaper on its 26th anniversary, on June 20, 2021, in Hong Kong.
Kyle Lam—Bloomberg/Getty Images

The Hong Kong pro-democracy tabloid Apple Daily said Monday that it may be forced to shut down by Saturday, according to the Hong Kong Free Press, a local online news service. The government’s latest moves against Apple Daily have left the newspaper without funds to pay staff and vendors, making it the most high-profile victim yet of Beijing’s tightening grip on the city’s once freewheeling press.

Next Digital, Apple Daily’s parent company, will reportedly make a final decision on whether to close the publication at a board meeting on Friday.

The decision to potentially stop printing in the city comes five days after Hong Kong police raided Apple Daily offices and arrested five top editors and executives of Next Digital. On Thursday, 500 police officers sifted through the computers and notebooks of the newspaper’s reporters. Hong Kong’s Security Secretary John Lee justified the raid and arrests by saying the newspaper used its reporting as a tool to endanger national security. He declared Apple Daily offices a “crime scene.”

Hong Kong authorities claim the law has brought peace and stability to the city after months of pro-democracy protests in 2019. Critics, including the U.S. government, have said the new legislation has eroded freedoms in a city that is supposed to be self-governing.

After the raid, Apple Daily said it would “press on,” and published 500,000 copies of its Friday paper, five times the amount it usually circulates. The paper also blasted authorities for the raid and arrests.

“Our newspaper and the local press [have] suffered unprecedented blows,” an editorial published on Sunday said. “It is becoming very apparent that the Hong Kong national security law overrides local laws that protect people’s freedom and rights.”

Apple Daily livestreamed the raid from its own social media channels, but authorities’ move to freeze Apple Daily’s bank accounts leave the publication few options for remaining in business.

Apple Daily reported over the weekend that authorities froze $2.3 million worth of assets amid the Thursday raid, making it impossible for Next Digital to pay employee salaries or to accept payments from vendors.

“Vendors tried to put money into our accounts and were rejected,” Mark Simon, an adviser to Apple Daily founder Jimmy Lai, told Reuters on Monday. “We thought we’d be able to make it to the end of the month. It’s just getting harder and harder. It’s essentially a matter of days.”

Apple Daily said it plans to appeal the asset hold, but Hong Kong’s Security Bureau told the Chinese nationalist tabloid the Global Times on Monday that freezing the accounts is “in line with the law” and accused the newspaper of engaging in “criminal activities.”

Lai, a fashion mogul and billionaire, founded Apple Daily in 1995. The newspaper rose to prominence as a tabloid-style outlet, publishing celebrity gossip and stories on local scandals with a pro-democratic editorial bent.

In recent years, Apple Daily has grown into the city’s only prominent pro-democracy newspaper; it supported protesters who in 2019 stormed Hong Kong’s streets to oppose Beijing’s increasing influence in the city.

Weeks after Hong Kong enforced the national security law in August 2020, police arrested Lai in his home, accusing him of violating the new law by colluding with foreign forces, attempting to incite secession, and committing fraud.

On Dec. 11, 2020, authorities officially charged Lai with national security law violations, and he has been in prison since late December after he lost an appeal for a bail request. Lai’s case is expected to go to trial in coming months, where he will face a maximum sentence of life imprisonment. Lai, who is currently serving a 20-month sentence in jail on separate charges after pleading guilty to participating in two “unauthorized assemblies” in protests last year, has not indicated if he plans to plead guilty to the additional national security charges.

Wu argues that government moves against Apple Daily are certain to have a chilling effect on Hong Kong’s media environment, as local publications become more cautious about publishing anti-government content.

He warns that foreign journalists, too, may find themselves under similar pressure in coming years. “You don’t know whether today’s argument or article will be violating the law,” Wu says. “My sense is the space for foreign media to operate in Hong Kong will be very limited in the future.”