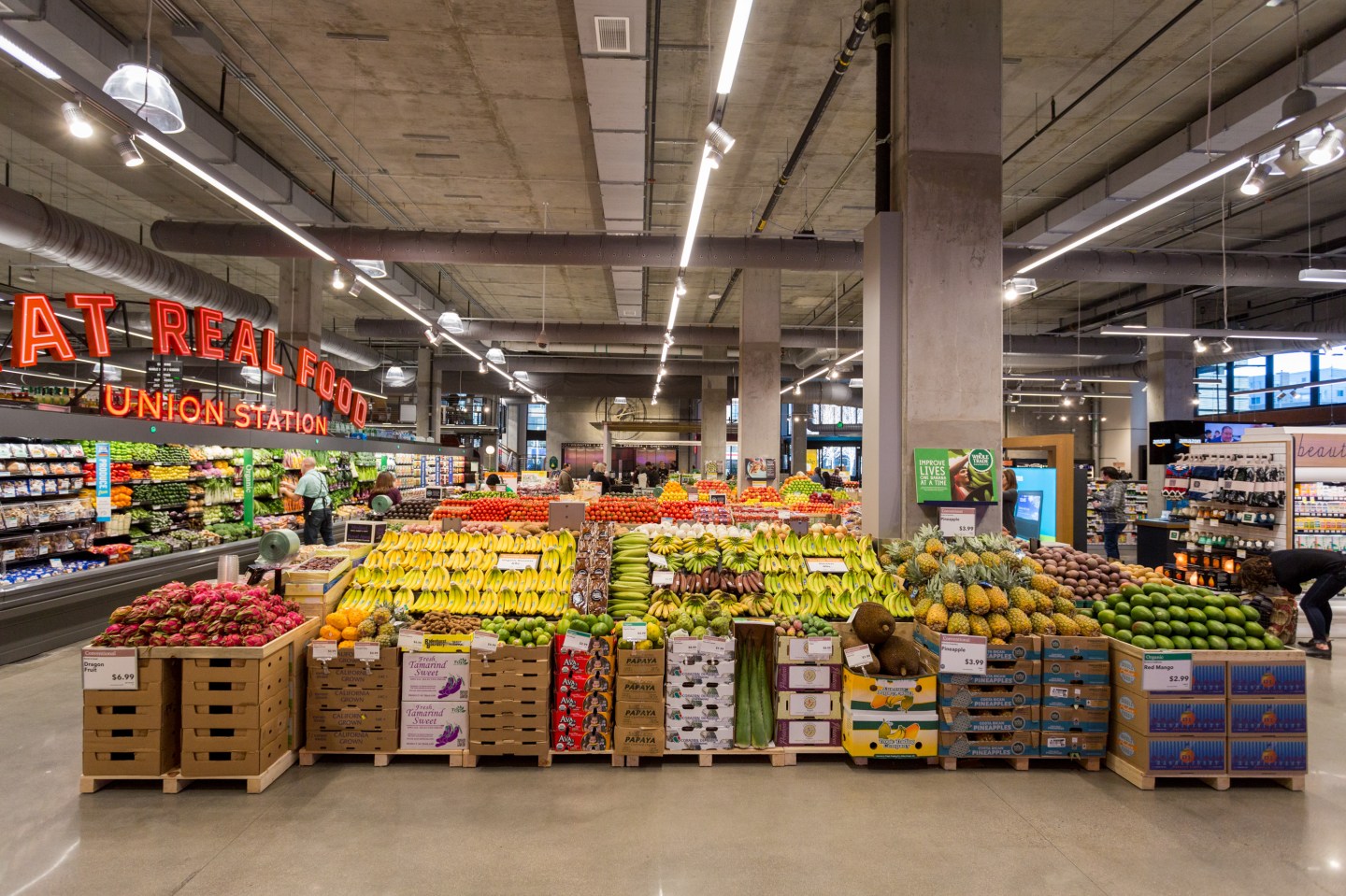 The USDA estimates that 30-40% of the U.S. food supply is wasted, annually.
Georg Beyer

Food loss and waste come in all shapes and sizes: banana peels, salmon trimmings, spoiled produce, expired goods, not-expired but perceived-expired goods, and so much more. Of all food produced in the United States, 40% of it is thrown away and culminates in our landfills, where it rots and emits methane, accounting for approximately 15.1 percent of total methane emissions in 2019.  This waste is generated throughout the entire spectrum of the food supply chain and systems, with more than 14% stemming from grocery retail.

Perusing the local market, it may not seem like those brilliantly lined shelves are purgatory for eventual trash, but the truth is, much of it goes untouched by the consumer. In the past decade, however, Fortune 500 grocers have made significant strides in combating this issue. In 2008, the industry generated 43 billion pounds of wasted, unsold food. As of 2019, that number reduced to 21 billion. Food waste and the surplus that leads to it can be solved.

While it may not be evident during a weekend stroll through the aisles, grocers like Walmart, Albertsons, Kroger, and Amazon are embarking on major waste reduction initiatives, and in some cases, achieving zero waste in the coming years. These efforts will relieve far-reaching implications on food security, the environment, and economic burdens in-store and among consumers. Grocers, a staple of communities, are shifting quickly, but there’s a lot of work to do.

Some causes of surplus

For most Americans, grocery stores are what lie between farm and fork. Avoiding excess food this source is multi-pronged and most often results from over-sourcing and product management in-store. Grocers constantly juggle procurement and demand. Then later, they need to determine what is ultimately unsalable. This can range from items that surpass sell-by dates to “ugly” produce and many things in between.

One issue is the ingrained habit of fully stocking shelves despite lack of demand. It is, for a customer, more enticing to peruse a well-supplied store than one reminiscent of a recent hoarding spree. Therefore, retailers cater to this, and lingering, surplus products sit on the shelves for way too long.

When products on shelves near their “Use By” date, Albertsons says it marks down prices or offers buy-one-get-one deals to encourage customers to buy those products. If this food is not purchased and safe for consumption, it is donated to local partners in order to get it to people in need.
Courtesy of Albertsons

Items like blemished fruit and vegetables are not easily marketable to the customer, therefore not placed on shelves in the first place.

“We know that humans don’t like imperfect foods. We are turned off by anything that isn’t shiny, glossy, and perfectly shaped the way marketing and advertising have made us associate what food should look like,” says Dr. Sweta Chakraborty, a behavioral scientist and president of U.S. Operations at We Don’t Have Time, a social media platform influencing climate policies. “These are challenges that, as a behavioral scientist, I need to help consumers overcome. Why are their cognitive associations affiliated with an image of a product versus the reality of the product, and that discrepancy between the perception of what it should look like versus the reality can result in poor decision-making, and ultimately, the behavioral outcome.”

So, even if a grocer decides to sell the hugging carrots or the stout zucchini, customers tend to avoid them. Education can lift the veil off perception and perfection, but tackling in-store awareness isn’t easy, as aisles are already saturated with signage and other marketing materials. Integrating educational pieces into that might not be effective. Yet, still, grocers mostly choose to use “ugly foods” elsewhere because it is more profitable than risking the loss.

“We look to see what we can do in stores to extend [food] with things like our Fresh Cut program, where if we have a small blemish, we repurpose the rest into a high-quality, valuable product for our consumers,” says Darcy Renn, director of ESG [environmental, social, governance] and Sustainability at Albertsons brands. They use imperfect produce in pre-cut packaged goods, like cubed watermelon or ready-to-eat meals. Whole Foods Markets follow similar practices. Fish filets cut-to-order leave portions of tail and belly flap unused. These scraps are transformed into seafood soups or candied smoked salmon, whereas ripened avocados are mashed into house-made guacamole.

Another issue is that customers tend to incorrectly interpret labels with “use by,” “sell by,” and “best used by” dates. These deter them from buying what they understand are expiring products when some of the labels are actually referring to products not at their prime. There’s no federal requirement for these labels, except on infant formula, and retailers aren’t in control of private brands’ labeling policies. However, in a 2017 letter from the FDA’s Deputy Commissioner Frank Yiannas to grocers, he stated that clarification needs to occur as confusing language determines what is purchased, consumed, and thrown away. More than 20% of food waste at home is a result of this confusion.

Kroger’s internal “Our Brands” products follow the FDA’s suggestion using only “best if used by” (safe to consume, but quality not as expected) and “use by” (highly perishable and/or have food safety concerns over time). Simplifying these labels gives grocers more leeway on moving those products, whether with donations or reduced prices.

Following the Food Recovery Hierarchy—a U.S. Department of Agriculture (USDA) and Environmental Protection Agency (EPA) guide on how to effectively prevent and divert waste—robust initiatives within grocers’ sustainability goals are redirecting this “excess food” to food banks, livestock feed, waste-to-energy programs, and compost. The goal is to avoid sending waste to landfills and putting edible food that would otherwise be discarded to good use.

A 2018 report by the EPA shows about 33% of grocer waste was landfilled, 21% was donated, 14% was sent to animal feed, and 14% went to recycling centers to be converted into fertilizer, compost, or renewable energy.

An EPA chart of food recovery prioritized from most preferred to least preferred.
Courtesy of the U.S. Environmental Protection Agency

With food creating such startling methane emissions in our landfills, Kroger and Walmart committed to achieving zero food waste by 2025, meaning facilities must recycle or divert at least 90% of materials that would have previously been sent to landfills. Kroger achieved 80% company-wide (this includes 2,120 of its stores) last year. In 2019, Albertsons dedicated its Pacific Coast Divisions (around 900 stores in Washington, California, and Oregon) to reduce waste by 50% by 2025, and as part of the U.S. Food Loss and Waste 2030 Champions, Whole Foods Markets is committed to 50% by 2030.

Once waste is determined, food donations are the first priority. Over the past decade, protocols for both markets and food organizations have evolved, including technologies and policies, that have allowed for more efficient and safe contributions to fight hunger relief.

“The food donation program [at Albertsons] started as bread, bakery, and things that were really easy to hand over to a food donation,” says Renn recalling previous years when food banks and pantries were not set up to receive food safely. Now refrigerated systems allow for more comprehensive donations, such as fresh produce, animal proteins, dairy, and pre-made meals.

Because of newer technologies, such as refrigerated trucks, food donations among these grocers are increasing annually. In 2020 alone, Albertsons stores donated 83 million pounds of food to Feed America and Kroger more than 500 million meals to the same foundation and its stores’ surrounding communities. Among its substantial food donations every year, Walmart provides millions of dollars to build better infrastructures that accommodate reliable and streamlined efforts, such as technologies that prolong freshness. Whole Foods provided 27 million prepared meals to food rescue and redistribution programs and the national organization Food Donation Connection.

When food is no longer safe for consumption, it can be recycled, which isn’t as easy as throwing peels into a bin and dragging it to the curb. If a store doesn’t have proper mechanisms onsite—like a Grind2Energy disposable that grinds basically everything except seafood shells—the endeavor can become incredibly cost-effective: from safely storing spoiling food, removing the packaging (i.e., lettuce from a bag), transporting to a facility, and so on. Whole Foods is rolling out the Grind2Energy technology in some of its stores, while others partner with nearby facilities (where possible) to aid in these efforts.

Moving forward and away from landfills

The United Nations estimates the world population will be 9.6 billion people by 2050. As we struggle to figure out how to feed that growth, we’re also grappling with how not to throw out food. This, for the sake of the environment and our neighbors.

ReFED, a nonprofit fighting food waste, provides insights and sources that guide all parts of the food system in reducing and diverting waste. And organizations, including Food Waste Reduction Alliance (FWRA) and Food Loss and Waste Protocol, educate grocers to create infrastructures and tracking procedures to alleviate the impact.

Food waste is a global problem. While ultimately, avoiding food loss and waste is possible if it weren’t created in the first place, a surplus is almost inevitable. The good news is new technologies are arising to balance consumer desires and inventory management, policies are shifting to encourage and mandate donations, and sustainability is simply becoming a top priority for corporations, stakeholders, and consumers alike.

Waste is decreasing, but it’s also up to the consumer to shop and consumer more consciously and responsibly. Know that those imperfect foods are equally nutritious to the prim counterparts and support stores with ambitious sustainability initiatives.