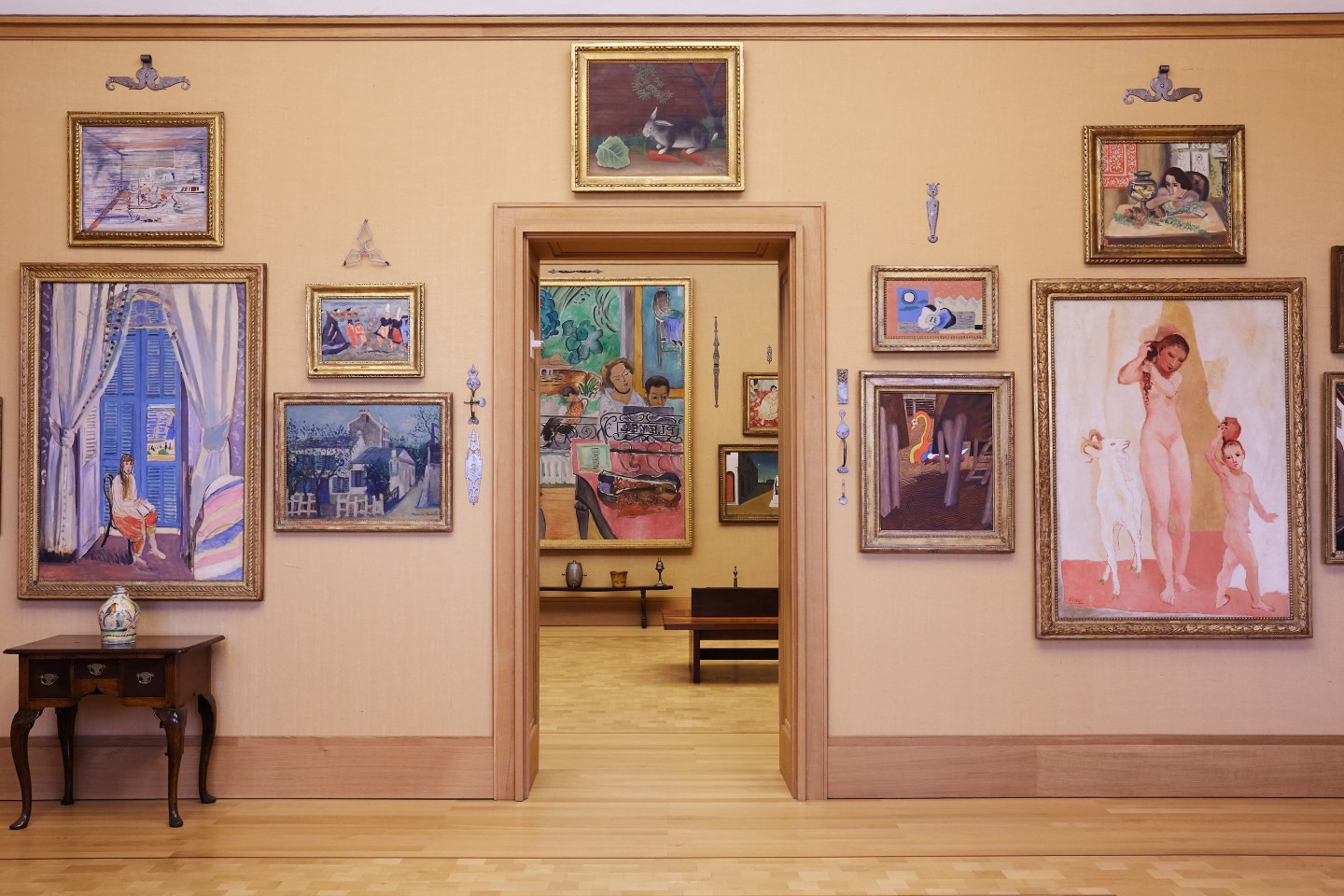 In the past year, Philadelphia’s Barnes Foundation has doubled its revenue from adult education classes, and is reaching a much broader audience.
Sean Murray

Last March, Martha Lucy had finished teaching the second of her four-week adult education class on van Gogh. Inside the auditorium and the intimate galleries of the Barnes Foundation in Philadelphia, Lucy, the organization’s deputy director for research, interpretation, and education, was guiding 74 students chronologically through the Dutch Postimpressionist’s career. They had just finished exploring his time in Paris, and were about to dive into the artist’s big move to the South of France.

Before the group made it to Arles, though, COVID-19 shuttered all nonessential businesses, leaving most, including the Barnes, racing to reassess and pivot. Could the classes be finished online? Would students paying to learn surrounded by van Gogh’s masterpieces opt into a virtual experience instead? And beyond Lucy’s classroom, how would the institution continue to keep art lovers engaged with the Barnes collection while its doors had to remain closed?

The team, including Lucy, chief of business strategy and analytics Will Cary, and Barnes Foundation president Thom Collins, along with the audiovisual and IT departments, answered these questions quickly. As the one-year anniversary of the pandemic recently passed, the Barnes Foundation is leading the field in online art history education. Financially, the institution has tripled enrollment for its adult education classes, generating an unprecedented amount of revenue and boosting its robust need-based scholarship program. It has also succeeded in bringing its world-class collection of Impressionist, Postimpressionist, and early modern paintings to a much broader audience.

The Barnes Foundation on July 9, 2018, in Philadelphia.
Michael Perez

Albert C. Barnes chartered the foundation in Merion, Pa., in 1922. The chemist made his fortune creating an antimicrobial drop called Argyrol, and spent decades pursuing his passion for art. Eventually, he amassed one of the most significant collections in the world, with over 3,000 pieces, including works by Matisse, Picasso, and a whopping 181 by Renoir—the largest collection of the French Impressionist’s works. But his emphasis on education set Barnes apart from other collectors. He facilitated art appreciation seminars for the workers in his factory, and nearly a century later, education is still at the core of the foundation’s mission.

“It’s all about education—making people feel comfortable with art so that they can understand it, talk about it, and appreciate it,” says Lucy, who is also one of the world’s most highly regarded Renoir scholars. “So it was really important for us to continue doing that during this time.”

The Barnes closed its doors on Fri., March 13, 2020, and a little over a week later, the team launched a YouTube series, sending out “daily servings of art” to its 150,000-subscriber email list. In each short Barnes Takeout video, a curator or scholar talks about one piece in the collection. Senior adult education instructor Kaelin Jewell, for example, explains how, in the painting Young Woman Before an Aquarium, the movement conveyed by Henri Matisse’s quick brushstrokes is juxtaposed with the stillness of the subject, meditatively staring into her fishbowl. (The painting, in gallery No. 23, hangs above a Picasso on the room’s north wall, making it a little more challenging to closely examine the French Postimpressionist’s brushstrokes in person.) The videos were an instant hit, and, says Will Cary, “The success of Takeout taught us that people were able to get enjoyment out of the digital experience with art, even though it’s obviously different than being in our physical gallery spaces.”

Within those first two weeks, too, Lucy restarted her class, going from lecturing her students about van Gogh in Paris from the Barnes galleries and auditorium, to discussing his move to Arles from her living room. The foundation considered the possibility of offering online classes for years, but it felt like a huge undertaking (with an uncertain ROI; would people even want to learn virtually?). So it wasn’t until the pandemic that it became a top priority. “Last January, we were coalescing our ideas around online education,” says Lucy. “And then, all of a sudden, we had five days to do it. But it was the best outcome, because we learned how much people enjoy learning this way, and how much interest there is out there.”

Besides positive student feedback, virtual classes were a clear financial success. The institution made about one-third of the previous year’s adult education revenue within the first month of moving online, and generated more than $650,000 since its launch last March—more than double the revenue in-person classes had generated in 2019.

A screenshot of a virtual class with “Barnes Art Adventures.”
Courtesy of the Barnes Foundation

Not to say there weren’t challenges in the move from in person to online. Hurdles included access to the Internet, and, sometimes, snags arising from students’ lack of technological fluency. But the IT team worked to simplify communications with the students, and make it as easy as possible to log in and tune in. And while nothing can replace the experience of standing in front of a work of art, there have been some upsides to moving online.

One such boon is care of a tool called Deep Zoom, a Microsoft-developed technology that lets users pan around an image, and home in on any part of it. The technology—which the team also uses for the Barnes Takeout videos—can be used for works in the foundation’s collection, enabling students to get an unprecedented glimpse of an artist’s brushstrokes, or nubs of paint on the canvas. “It’s nothing that you would be able to see while standing in front of the work,” says Lucy, who’s quick to add, though, that nothing replaces being in the presence of art. “It really allows you to see the working process, so you just can be with the work in a different way.”

Another upside to remote learning is its reach. The Barnes has one of the most impressive collections in the world, but its classes have historically been populated with students from the Philadelphia region. According to president Thom Collins, classes this past year drew more than 2,800 students from 39 states and six countries. Besides students, the organization can also tap curators and art historians from anywhere to teach classes. Now, educators come from local institutions—University of Pennsylvania, Temple University, St. Joseph’s—but Lucy says they also have an instructor from California, and they’re starting to recruit talent internationally, as well.

In addition to adult education programs, the foundation also has a free, award-winning prekindergarten through 12th grade curriculum, serving schools in Philadelphia and Camden, N.J. While in-person programs were on hiatus this year, the team also created virtual Barnes Art Adventures for schoolchildren.

They chose each online platform based on the content they are trying to deliver. “We’re not going to assume we know what our audiences want and need,” notes Collins. “We’re going to try to figure it out.” While noninteractive YouTube videos work well for the narration in Barnes Takeout lessons, and Microsoft Teams is ideal for online adult education classes, which usually start with a lecture and evolve into breakout rooms for discussion, after considering the differences between child and adult education classes, the team decided to use Amazon’s Twitch. The livestreaming platform mainly used by video gamers works well for these interactive 30- to 45-minute classes, in which an artist or educator does demonstrations, and students can use the platform’s chat feature to ask questions and engage.

After a year of unprecedented challenges, the Barnes Foundation’s doors are open again, with a host of pandemic-influenced updates, including a reopening playbook made in tandem with Jefferson University’s College of Population Health, and sleek new technology like the Temi social robot. Guests scan their individual QR codes on the robot’s “face” as they enter and exit each gallery, and the robot will alert team members via text if the room is at risk of becoming too full. And while guests can walk through the galleries again, the team is working to expand online education in a number of different directions.

“We’ve always prided ourselves on approaching everything we do from an iterative design perspective, so maybe we were better prepared than some institutions to learn and adapt in process,” says Collins, who also notes that moving forward, the Barnes will offer a virtual component to its adult education offerings. “There’s no going back.”