Will the pandemic finally get Americans to embrace QR codes? 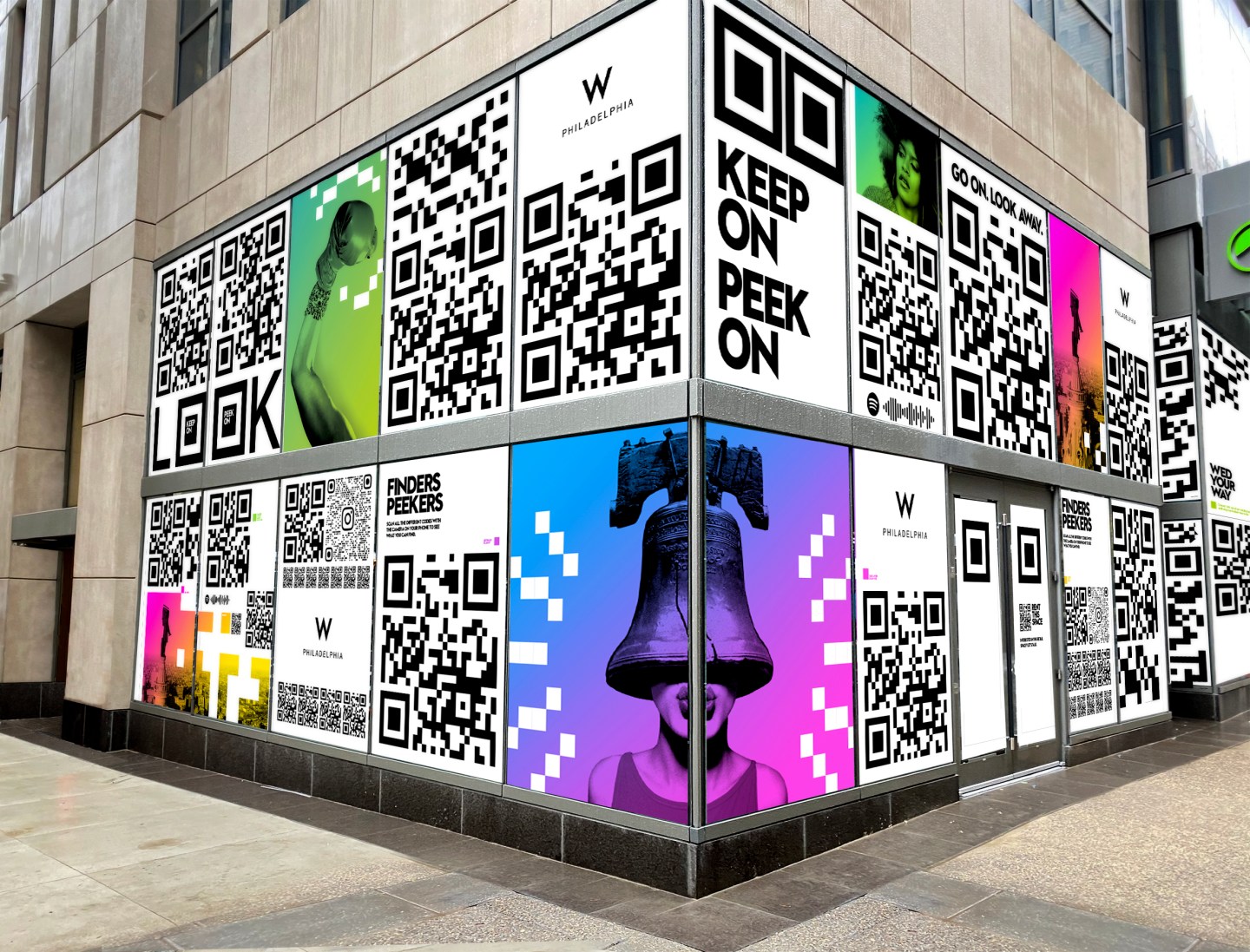 My husband and I sat at our kitchen table in Philadelphia recently, breaking up the monotony of quarantine cooking with a delivery from the recently launched Pete’s Place, chef Peter Serpico’s self-described “kinda Korean” takeout spot he runs from his temporarily shuttered restaurant. Pasted onto the plastic lid of the spicy chicken ramen, there was a small QR code. We’ve seen (and mostly ignored) them for years, but they’ve started popping up again—at restaurants, bars, and shops. My husband pointed his phone’s camera at the black-and-white square and was rewarded with a video. In it, Charlie, Serpico’s 5-year-old daughter, deftly and charmingly demonstrates how to assemble the meal using the included, uncracked soft-boiled egg.

“We were searching for a way to personalize the experience,” Serpico says. “When we were a sit-down restaurant with an open kitchen, we had the ability to personalize it with face-to-face interaction. We wanted to capture that through takeout.”

It was a successful endeavor. Not only were Charlie’s instructions helpful, but the delightful, surprising moment brightened what would have otherwise been an uneventful (albeit delicious) takeout dinner.

QR codes, or quick response codes, were invented in 1994 by Masahiro Hara, an engineer who worked in Japan’s auto industry, with the goal of tracking vehicles and parts during the manufacturing process. Instead of typing in a tedious URL, scan a small black-and-white label with your phone to instantly pull up a website or app. In the years that followed, other sectors, including advertising, marketing, and online payment services, adopted their usage. A wide swath of countries in Asia embraced the technology; in China alone they can facilitate everything from charging mobile phones to flirting in bars. Now, in cities like Bangkok and Hong Kong, the technology has been tapped to help curb the COVID-19 pandemic; codes posted at the entrance to grocery stores and public transit centers help contact-tracing efforts in case of outbreaks. But in the decade or so since QR codes have been floating around the U.S., they haven’t been widely adopted. In the past year, though, spurred by the pandemic, the technology seems to finally be coming into focus.

Before 2017, when Apple updated its iPhone software to enable the camera app to read QR codes, users had to download a specific QR reader app. Some tech industry insiders speculated that eliminating that minor friction would make the codes more ubiquitous, but even then they never really took hold. Then opportunities arose during the pandemic, which prompted a rethink of long-standing norms and may have finally made the technology more permanently mainstream in the U.S.

In its recent state of the industry report, the National Restaurant Association noted that, since last March, half of full-service operators have added digital menus accessed by scanning a QR code. This includes 28 restaurants that make up José Andrés’s ThinkFoodGroup. Chief operating officer Eric Martino says at the onset of the pandemic, the company immediately sought ways to make its operations contactless.

“We had to figure out how to keep people safe,” Martino says. “People are not going to want to touch a menu, and how do we do this without having to hold a [credit] card, which puts our team in danger?” The COO recalled how QR codes were stamped on new appliances, linking to a digital manual or enabling owners to seamlessly shop for new parts.

“If we could use this technology, we could really help change the game,” he says. As ThinkFoodGroup began reopening restaurants, Martino and his team focused on contactless systems and found a company called GoTab that enabled their customers to scan a QR code, pull up a digital menu, and, in some of the restaurants, pay through the connected point-of-sale (POS) system.

Now, a small plastic cardholder sits on each table, displaying the black-and-white checked square that instantly pulls up the menu. (It’s sanitized between seatings.) Though the restaurants still offer disposable paper menus for diners who don’t have mobile phones or would rather not use the QR code system, Martino says over 110,000 guests have used the QR code menus since ThinkFoodGroup launched the system, each spending an average of 11 minutes engaged in it.

Restaurants that run the gamut from quick service to fine dining have adopted QR codes as part of their safety protocols since the onset of the pandemic. In Philadelphia, modern Taiwanese spot Baology started using QR codes last spring to display its frequently changing menu of handmade pot stickers and gwa baos, and, since some customers aren’t familiar with the cuisine, to provide images. Owner Judy Ni was familiar with QR codes from using them in Taiwan, where her parents emigrated from, and theorizes Americans’ reluctance to adopt the technology pre-pandemic stems from our collective cultural notion of service.

“In Asia, speed and convenience is of the essence, and their absorption of new technologies and practices is breathtakingly fast,” Ni says. “Americans are slower to adopt new conveniences and technology while also having expectations for how they should be ‘served,’ especially at certain types of establishments.”

With the restaurant industry in a state of pandemic-induced flux, the time for introducing new norms is now. Besides popping up in fast-casual and chain restaurants, QR codes have also made an appearance at some of the country’s most rarefied establishments—places where pulling out your phone to peruse a menu might once have seemed as incongruous as being alerted that your table was ready with a vibrating restaurant pager. Several restaurants under the Relais & Châteaux umbrella have QR code-accessible menus, including New York City’s Jean Georges, Gabriel Kreuther, and Daniel. At Daniel, Daniel Boulud’s eponymous French restaurant on Manhattan’s Upper East Side, the chef says they began using QR codes to eliminate a surface that multiple people touch, like a menu, for employee and guest safety. But it hasn’t diminished the fine-dining hospitality experience. “Our guests have embraced the contactless menus and have found it to be a simple and straightforward experience to navigate,” says Boulud, noting that the team is considering maintaining the digital menu option after the threat from the pandemic passes.

Like Serpico’s Pete’s Place, restaurants are also tapping the technology to go beyond showcasing menus to inject both utility and unexpected fun. In Los Angeles, the QR code on Yunomi Handroll’s takeout bento box shows how to assemble it, and Big Bar sells cocktail kits that come with a QR code pointing to a step-by-step instruction video.

QR codes are catching on quickly elsewhere in North America. At La Bartola in Toronto, chef and owner Ivan Castro optimizes the takeout experience with “Journey Through Mexico” dinner boxes, each one highlighting a different region of his native country. “We wanted to make this a sensorial experience involving sight, touch, taste, and smell, but the hearing was missing,” Castro says. “So we made a curated playlist to bring you to the place you’re visiting; we used a QR code to make everything easier for our guests to enjoy the journey.” While tucking into Oaxacan tamales and mushroom tlayuda, diners can listen to transportive tunes. “It was the most restaurant-y vibe I’ve felt in more than 10 months,” says Toronto-based writer Kat Tancock. “It was so nice to have someone else picking the music.”

As QR code use has gained steam in the restaurant industry, it’s opened the door for others in the hospitality sector, now riding the wave of these new swaths of savvier (and more attentive) consumers. The W Hotel is opening its first outpost in Philadelphia this spring, and, with the help of advertising agency One Trick Pony, have planned for a larger-than-life installation wrapping around their highly trafficked corner of Center City. Complex general manager Ed Baten says he remembers when QR codes first emerged, but, though they seemed cool and useful, interest seemed to fizzle out.

“Then along comes the pandemic, and businesses are trying to find ways to communicate and share information,” he says. “In particular, the hospitality industry has so many pieces of collateral, whether it’s a restaurant menu, or instructions for how to operate your TV, we want to minimize the touch points that might be issues for potential exposure.”

The installation will include an Easter egg hunt–like experience, wherein passersby can uncover something different behind each code—a playlist, a video highlighting one of the local artists whose work is featured at the hotel, or another glimpse into its interior.

While QR codes have become a ubiquitous no-contact menu option for thousands of restaurants and bars, and have opened the doors to more creativity and engagement for many others, will they stick around when they’re no longer strictly necessary for providing contactless options during a global pandemic? For Eric Martino, ThinkFoodGroup’s COO, the convenience of using them just makes sense. In restaurants such as the group’s fast-casual concept Beefsteak, located on four college campuses, Martino sees using the codes to peruse the menu, order, and pay online, making it both quick and convenient. “You can use this almost like a walk-through drive-thru,” he notes. “This technology will help the industry move forward outside of the pandemic.”

According to Baten, another bonus in using QR codes is that they stay relevant. Though the physical printed matter remains the same, it can direct users to an ever-changing website or app. “The way QR codes work, our content can be refreshed,” he says. “It would never get stale.” The technology has existed for more than 25 years, and, in America, it’s finally arrived.