Will there be a Dr. in the White House? Absolutely 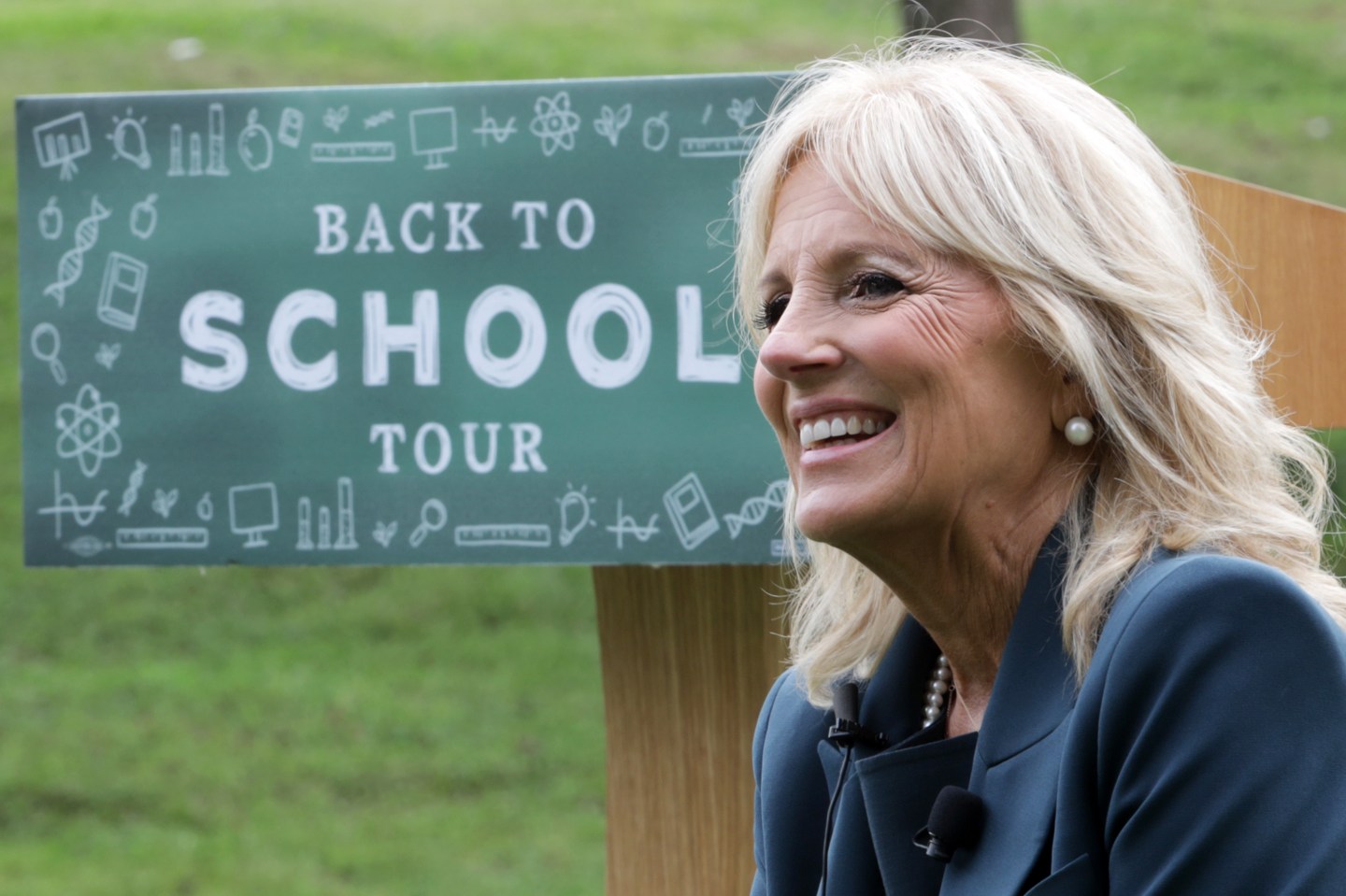 – There’s a Dr. in the house. If you spent this weekend relaxing, hanging out with friends and family, or reading for pleasure, allow me to fill you in on the past few days’ hate-read of choice. The topic is one that may seem ridiculous right off the bat—and it doesn’t get any better.

Should Dr. Jill Biden, the First Lady-elect of the United States, call herself “doctor?” Writer Joseph Epstein managed to devote 800 words to this question in the Wall Street Journal‘s opinion pages.

Any belief that this would be a good-faith argument evaporated in the piece’s first sentence, where Epstein addresses the 69-year-old First Lady-elect as “kiddo.” Her title of “Dr.,” he argues, “sounds and feels fraudulent, not to say a touch comic.”

Epstein achieved something rare with this piece. In one fell swoop, he offended Ph.D.s in the humanities and social sciences (he argues that the degrees have lost their prestige); medical doctors (for some reason, he cites a “wise man” who said that “no one should call himself ‘Dr.’ unless he has delivered a child”); his former employer, Northwestern University, which issued a statement distancing itself from him; and, of course, women.

Would any writer dare to declare in a national newspaper that a man who has earned the title of “Dr.” through years of study should “drop the doc?”

Biden was awarded her doctorate—an Ed.D., or a doctor of education—from the University of Delaware in 2007. Epstein is not just the latest in a long line to question women’s professional achievements, but belittles Biden’s research specifically. He calls the title of her dissertation, “Student Retention at the Community College Level: Meeting Students’ Needs,” “unpromising.” That analysis—to be generous with the word—would likely be news to the community college students Biden has taught for more than 20 years, including during her time as Second Lady, and to those who will be in her classes as she continues to teach after moving into the White House. (The Merriam-Webster Dictionary had another appropriate clapback to that dig: it added that the word “doctor” comes from the Latin word for “teacher.”)

Epstein, who admits that he is not a doctor of any kind, bemoans that he has often been called “Dr.” by mistake—a hardship I doubt many women have faced. A 2017 study of speaker introductions at Internal Medicine Grand Rounds, for example, found that men introduced women with their professional title only 49% of the time, compared to 72% of the time for male speakers with similar qualifications.

The WSJ writer spends a chunk of his op-ed chronicling a supposed loss in “prestige” to the Ph.D. outside the sciences over the past few decades, with standards “relaxed” from mid-century tests in Greek or Latin and oral exams that, he says, left candidates fainting. That was, of course, an era when few women were able to attend the universities where those degrees were awarded. So, by Epstein’s standards, it seems that hardly any woman who is an expert in a humanities or social science field should ask to be addressed by the title she earned, coming in as she did after norms in higher education changed.

There are some good arguments against always using the title “Dr.;” AP style—and Fortune‘s style—usually don’t use honorifics, instead describing a person by their specific expertise when relevant. Some argue that an over-reliance on or celebration of advanced degrees can make those credentials seem necessary to students who take on more and more debt to obtain them.

But as to whether Dr. Jill Biden, who earned a doctorate through years of study, has the right to call herself by the title? Of course the answer is yes. The First Lady-elect weighed in on the debate Sunday night: “Together, we will build a world where the accomplishments of our daughters will be celebrated, rather than diminished,” she wrote on Twitter.

Epstein is an essayist known for his “wit,” so maybe this was meant to be a humorous piece. But when so many women are faced with their colleagues and bosses questioning their professional expertise every day—whether they have a fancy title or not—the joke just doesn’t land. You can read the op-ed, if you must, in the pages of the WSJ. (We have decided not to give it additional promotion by linking to it.) Or better yet—read Dr. Biden’s dissertation here.

- Meghan Markle, startup investor. A Fortune exclusive this morning: Meghan Markle is making her debut as a startup investor. The Duchess of Sussex is backing Clevr Blends, a Southern California-based brand led by cofounder and CEO Hannah Mendoza that makes instant oat milk lattes. The duchess is interested in supporting female-founded companies and says that her investment is "in support of a passionate female entrepreneur who prioritizes building community alongside her business." Read more here: Fortune

- Disturbing lawsuit. The musician FKA twigs filed a lawsuit against actor Shia LaBeouf, describing a pattern of physical, emotional, sexual, and mental abuse in their relationship. Her aim with the unusual civil suit is to "explain how even a critically acclaimed artist with money, a home and a strong network of supporters could be caught in such a cycle." LaBoeuf said that some allegations were "not true," but said he has "no excuses for [his] alcoholism or aggression, only rationalizations." New York Times

- #QueSeaLey. Argentina is set to become the first major Latin American country to legalize abortion after a measure to do so passed the legislature's lower house. Abortion rights campaigners have been pushing for the change for years and hope the decision could lead other countries in the region to follow suit. On social media, women's rights activists are using the hashtag #QueSeaLey: "let it be law." Guardian

- FDA OK. In its emergency authorization of the Pfizer vaccine, the Food and Drug Administration left open the possibility that pregnant and breastfeeding women can receive the immunization. The vaccine is authorized for anyone older than 16; the FDA asked Pfizer to file regular reports on its use in pregnant women, who weren't included in tests. In the U.K., in comparison, regulators have cautioned against pregnant women receiving the vaccine. Health care providers say the choice allows women to pick the best option for their own health. New York Times

- Deal or no deal? The U.K. and EU are warning that a no-deal Brexit is likely after talks between U.K. Prime Minister Boris Johnson and European Commission President Ursula von der Leyen ended without an agreement. The two leaders extended their deadline; von der Leyen says it is "responsible" to go "the extra-mile." CNN

- Keep going, period. After Scotland's decision last month to make menstrual products free, Chandra Bozelko, a contributor to the Palgrave Handbook of Critical Menstrual Studies, argues that businesses must continue to fight period poverty—both to help women and girls who can't afford pads and tampons, and to support women in the private sector who can be caught without access to menstrual products when they need them. Fortune

Female workers could take another pandemic hit: To their retirements New York Times

She stalked her daughter's killers across Mexico, one by one New York Times

Biden’s CDC pick, a savvy communicator, will take over at a time when agency’s voice has been muted STAT News

"Honestly, it was the Harry Potter socks."

-Vanderbilt kicker Sarah Fuller, who became the first woman to score in a Power Five college football game when she kicked two extra points on Saturday. She credits her lucky socks.