Why investing in supply chain resilience pays off 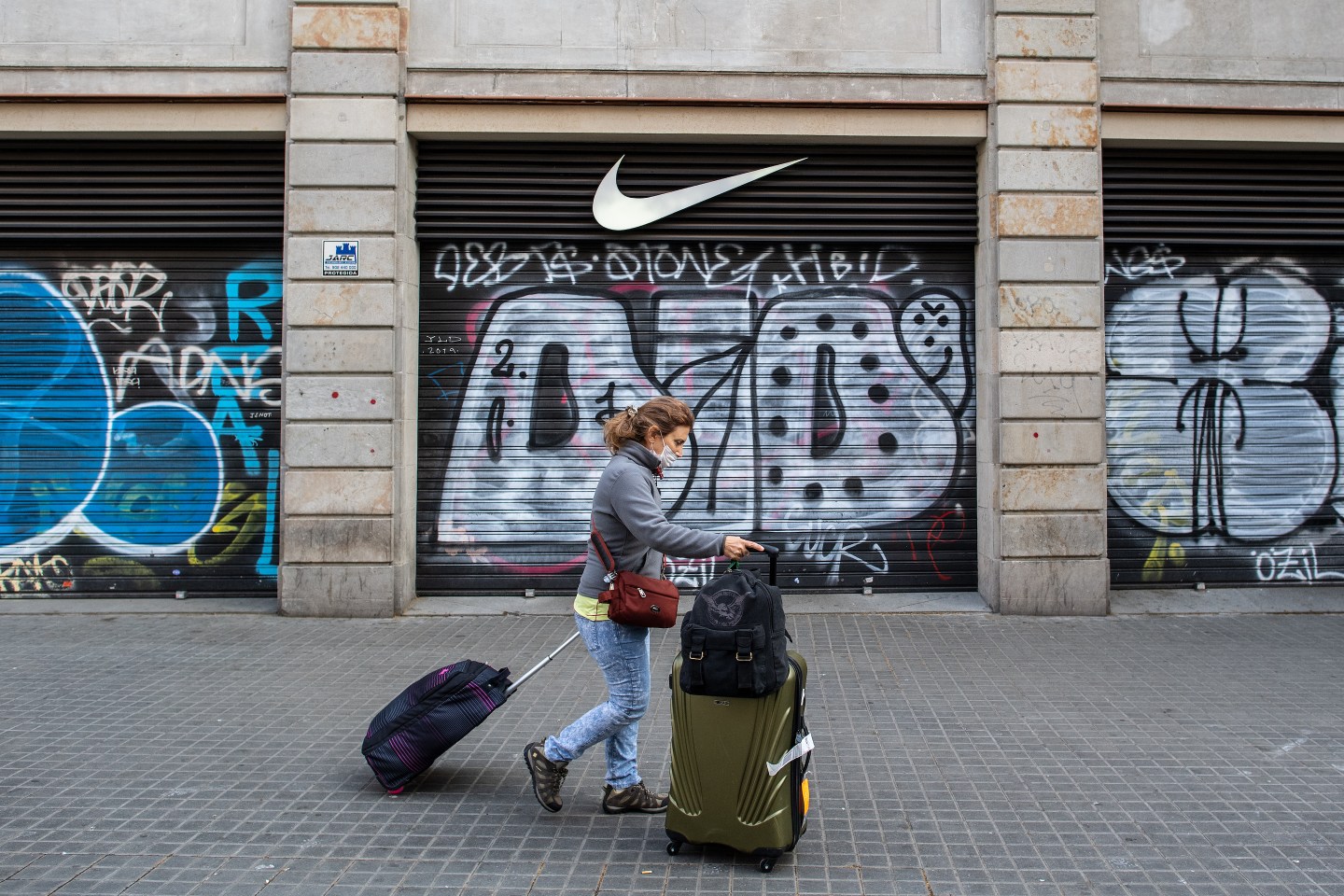 When the COVID pandemic broke out, Nike’s digitized supply chain enabled the company to quickly shift products headed for brick-and-mortar stores to e-commerce fulfillment centers in China. As a result, it minimized the hit to revenue at a time when its competitors sustained much larger hits.
David Ramos/Getty Images

In normal times, the prospect of having to announce even a small drop in earnings is enough to make an executive team sweat. But that kind of setback pales in comparison to the losses that supply chain disruptions routinely inflict—and that’s without taking into account huge outlier events like the COVID pandemic.

Much has been written about how to make supply chains more resilient. But for years, many companies, wary of eroding efficiency in the immediate term, put off the preventive measures that could minimize the impact of disruptions in the future. The pandemic has once again driven home the necessity of managing operational and supply chain risk—and it has catapulted these issues to the top of CEO agendas. Now the unexpected has to be considered probable, and at least a baseline level of expected losses from disruption should be embedded into financial planning. This information can help companies make better decisions about how to invest in supply chain stability. Our analysis indicates that an average large company could spend up to 45% of one year’s profits in resilience measures and still come out ahead over a decade. That investment can leave “just in time” systems better prepared for “just in case” eventualities.

It’s not just a figment of our collective anxiety: The world really has become riskier. Changes in the environment and in the global economy are increasing the frequency and magnitude of supply chain shocks.

Dozens of weather disasters each year cause damages exceeding a billion dollars each—and the economic toll caused by the most extreme events has been escalating, as Hurricane Laura and the California wildfires are proving yet again. A multipolar world with clashing economic systems is producing more trade disputes, tariffs, and uncertainty. The share of global trade conducted with countries ranked in the bottom half of the world for political stability, as assessed by the World Bank, has risen from 16% in 2000 to 29% in 2018, and 80% of trade now flows through countries with declining political stability scores. As companies become more reliant on digital systems, they are also more exposed to cyberattacks. Interconnected supply chains and global flows of data, finance, and people offer more “surface area” for risk to penetrate, and ripple effects can travel across these network structures rapidly.

We surveyed dozens of supply chain experts in the automotive, aerospace, consumer electronics, and pharmaceutical industries to gauge just how frequently things go wrong. Their responses were surprising: Every two years brings a shock that halts supply and production for one to two weeks. More prolonged events also come around more frequently than might be expected. Manufacturers can expect disruptions lasting one to two months to occur every 3.7 years on average, and those dragging on for two months or longer every five years or so. Lengthy global supply chains deliver real margin improvements, but events of this frequency have to be fully accounted for as a real cost of doing business with this kind of structure.

Companies are already attuned to some types of risk simply because they encounter them more often. Data breaches, theft, and industrial accidents happen, and manufacturers have systems and functions in place to try to prevent them. Trade disputes, too, have dominated the headlines in recent years, leading some multinationals to alter their geographic footprint.

Other types of shocks may be rare occurrences, but they can inflict much bigger losses and need to be on the radar screen as well. They include extreme weather, earthquakes, financial crises, major terrorist attacks, and, yes, pandemics. Even some calamities that the world has avoided to date, such as a cyberattack on foundational global systems, should be part of scenario planning. If 2020 has taught us anything, it’s the folly of assuming that extreme scenarios will never come to pass.

Not every company or industry is exposed to these potential shocks to the same degree. We analyzed 23 value chains, looking at their footprint, factors of production, and other variables. In some industries, suppliers are heavily concentrated in a single geography owing to specialization and economies of scale—but a natural disaster or localized conflict in that part of the world can cause critical shortages that snarl the entire network. Industries such as mobile phones and communication equipment have become more concentrated in recent years, while others, including medical devices and aerospace, have become less so. Overall, we find that value chains with the highest trade intensity and export concentration are more exposed to shocks than others. They include some high-value and sought-after industries, such as communication equipment, computers and electronics, and semiconductors and components. However, labor-intensive value chains such as apparel are vulnerable to pandemics, heat stress, and flood risk.  All of these value chains are ripe for shifts to different countries as companies focus on resilience and policy makers rethink what is essential to national economic security.

Over the course of a decade, companies can expect disruptions to erase half a year’s worth of profits at a minimum

We built representative income statements and balance sheets for hypothetical companies in 13 different industries, using actual data from the 25 largest public companies in each. We then put them through a stress test to see what kind of financial losses a 100-day shutdown would produce. Modeling an event of this severity may seem extreme, but one study found that in 2018 alone, the five most disruptive supply chain events affected more than 2,000 sites worldwide and took factories 22 to 29 weeks to recover.

Our scenarios show that a single prolonged production-only shock would wipe out between 30% and 50% of one year’s Ebitda for companies in most industries.[1] An event that also disrupts distribution channels would push the losses sharply higher in some industries.

This information makes it possible to estimate a minimum bottom-line impact companies can expect over the course of a decade, based on the probabilities and frequency of occurrence. The results vary across industries, but on average, companies can expect to lose almost 45% of one year’s profits over the course of a decade. The potential for financial losses is largest for companies in the aerospace, automotive, and mining industries. These figures do not include the additional cost of rebuilding damaged physical assets or the destruction of shareholder value, which may persist for some time after the shock.

These are the hidden and recurring costs of doing business with complex supply chains in a riskier world—and they are only the baseline. Catastrophic events such as the COVID pandemic can inflict far greater damage to the bottom line, creating losses that some manufacturers may not be able to withstand.

There is a flip side, however. Individual companies may be able to turn external shocks into lemonade. Events that strike one company’s operations and suppliers but not a competitor’s can boost the latter’s market share, at least temporarily but perhaps permanently. Others may seize on a crisis, innovating quickly and successfully under pressure in ways that propel growth over the long term.

A newfound appreciation for risk is prompting companies to act

Practical strategies for making supply chains more transparent and resilient have been widely discussed for years. But they do require making long-term investments or accepting a slightly higher cost of goods. For that reason, only a small group of leading companies had taken decisive action before the pandemic hit.

But now change is brewing. McKinsey surveyed 60 global supply chain executives in May 2020. An overwhelming 93% reported that they plan to take steps to make their supply chains more resilient—and half of them were willing to prioritize resilience over short-term profitability. Overall, 53% of respondents plan to diversify their supplier network by qualifying more vendors and building in redundancies; 47% plan to hold more inventory of critical inputs; 40% plan to near-shore their supply base, and 38% plan to regionalize it.

Stability may be emerging as a key metric for measuring corporate performance. Resilience may be a new element considered alongside environmental impact and social purpose as investors and customers assess companies.

In total, we estimate that 15% to 25% of global goods trade, worth between $2.9 trillion and $4.6 trillion in 2018, may shift to different countries over the next five years owing to a combination of companies restructuring their supply chains and governments taking action to boost domestic production.

But there are many other ways to address risk that go beyond changing the physical location of production and switching to new suppliers. The pandemic has occurred at a moment when technology is leapfrogging forward into the era of Industry 4.0—and creating supply chain transparency through digitization can boost productivity and resilience simultaneously.

Digitization enables visibility into who supplies your suppliers and spots vulnerabilities hidden deep in the lower tiers of the network. One aerospace company that undertook this effort found that it was sole-sourcing 20 different components from sub-tier suppliers; identifying this issue enabled the company to bargain for better prices with competitors and to remove this potential bottleneck. When the COVID pandemic broke out, Nike’s digitized supply chain enabled the company to quickly shift products headed for brick-and-mortar stores to e-commerce fulfillment centers in China. As a result, it minimized the hit to revenue at a time when its competitors sustained much larger hits.

Some companies have made it a point to model prioritized risks, but they have often done so by looking at these shocks as discrete events. Now analytics tools enable a more sophisticated approach that quantifies risks in the context of broader and more integrated scenarios. This makes it possible to combine extreme one-off events with knock-on effects and the ongoing business cycle, taking correlations into account. Scenarios can also integrate a range of risk-mitigation strategies to test which would be most effective. The results can then inform strategic planning and capital allocation decisions.

Preparing for future hypotheticals sometimes has a present-day cost. But if those investments focus on digitally connecting the entire value chain from end to end, they can pay off over time—not only minimizing future losses but boosting productivity and strengthening entire industry ecosystems today.

[1] Losses measured in net present value. If losses are not discounted, they would range significantly higher, wiping out the majority of a year’s profits.