Banks stand to make billions from the pandemic. How can that filter down to everyday Americans? 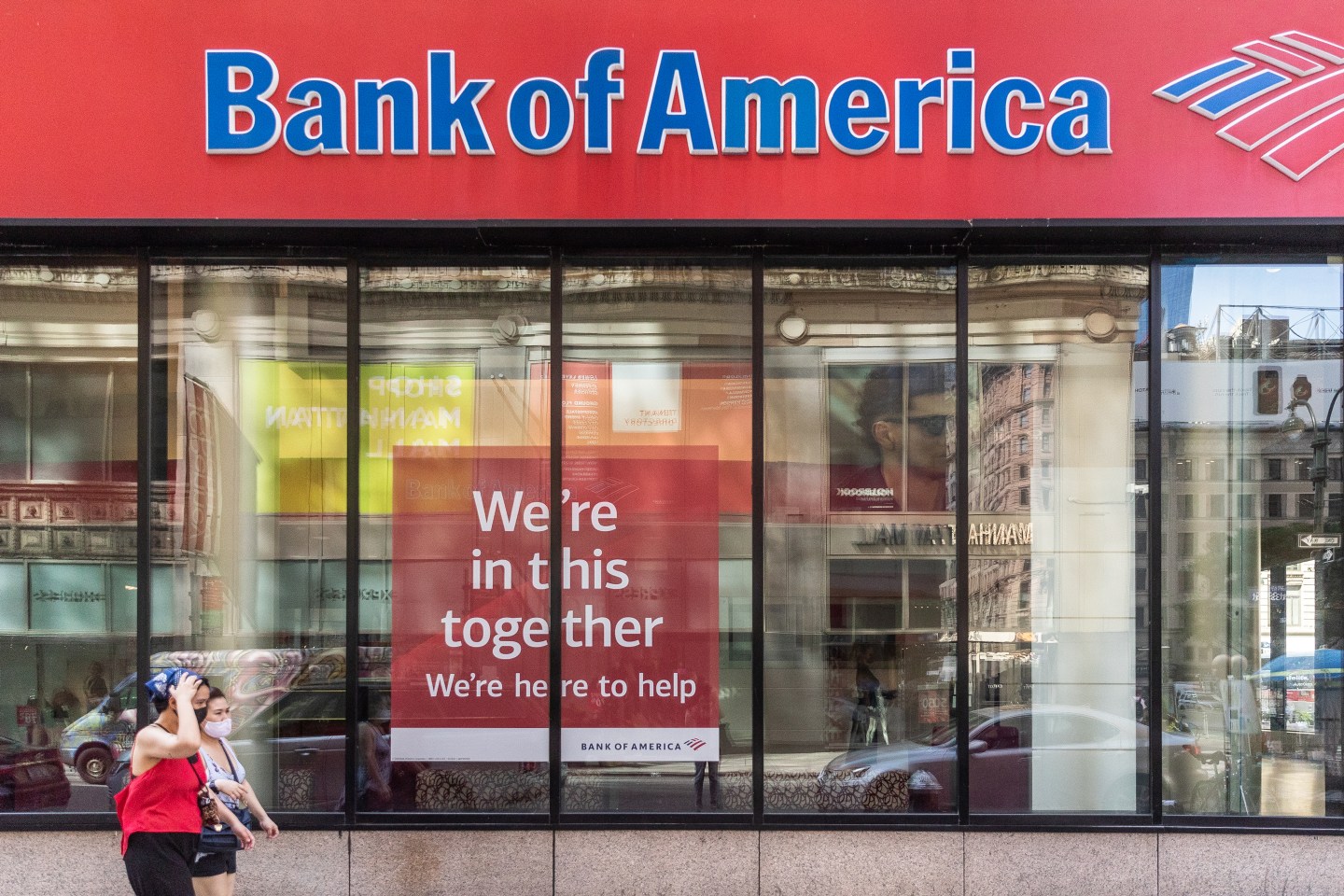 Pedestrians walk past a Bank of America branch in New York City on July 9, 2020. Taxpayers bailed out banks in 2008; today, banks should return the favor by helping people struggling during coronavirus, write Erin Mahoney and Nick Weiner.
Jeenah Moon—Bloomberg/Getty Images

At first glance, the economic fallout from the COVID-19 pandemic mirrors the one following the subprime mortgage crisis that came to a head in 2008.

Similar to the Great Recession, today unemployment has soared to double digits, more than 55 million have filed for jobless benefits, and nearly one out of three Americans has missed a housing payment.

Unlike last decade’s crisis, when taxpayers bailed out the nation’s financial institutions to the tune of $498 billion, big banks today can support their employees and their customers in a way that brings our economy back up to speed.

In an ironic twist, banks actually stand to rake in billions in fees from distributing pandemic relief to small businesses and have beat earnings estimates, in large part thanks to capitalization requirements set by the Dodd-Frank Act, which marked its 10th anniversary in July. These same safeguards are now under attack by Senate Republicans, who are exploiting this crisis to quietly send us back to the days when big banks brazenly gambled with Americans’ savings.

But the gains made by the nation’s biggest banks during COVID-19 have not translated to gains for customers or employees. In fact, according to a new analysis by the Committee for Better Banks, the nation’s only independent organization of frontline bank workers, many of the country’s largest banks failed to support their customers and employees through the onset of the crisis.

We set the bar high because that’s what this crisis demands, and because banks have an unmatched opportunity to safeguard the financial health of consumers nationwide: The 12 banks analyzed in the scorecard have combined total assets of $8.5 trillion and made more than $155 billion in profits last year.

Our scorecard, which graded banks on their handling of small-business lending, worker protections, and customer protections, resulted in failing grades for four of the country’s largest banks: Wells Fargo, Santander, PNC Bank, and U.S. Bank. Only one of the 12—Fifth Third Bank—scored above a C.

If banks canceled stock buybacks to put more dollars into bridging the economic fallout of the virus, they gained points. Same for if they quickly adapted to telework, offered paid leave, offered hazard pay, or ensured social distancing and cleaning.

A patchwork of workplace safety policies strained already overextended frontline bank workers trying to mend customers’ financial troubles. Some banks like Capital One and Fifth Third performed well, while others like Wells Fargo dragged their feet. Wells Fargo has even forced employees to work out of major downtown office buildings throughout the pandemic for in-person training that—with their managers teleworking—winds up happening over the phone. Moreover, only half of the banks committed to halting layoffs that would leave employees without health insurance or a paycheck in the midst of a pandemic.

Major failures for consumers brought the grades down considerably. Our analysis found that eight banks did not extend one-year forbearance, as detailed in the federal CARES Act, to all their mortgages. A federal watchdog found Bank of America and Truist to be some of the biggest offenders in providing confusing information to customers regarding forbearance policies. And customers told us they lay awake in a cold sweat over their ability to get small-business relief loans, terrified that after being urged to apply to multiple banks for the Paycheck Protection Program, they had accidentally committed fraud.

Banks should be judged for how they treat people, especially during a national crisis. And yet, when the economy ground to a halt, banks like Wells Fargo sidestepped their workers and customers to lobby for regulatory easing that would boost their profit line.

It’s critical that we do not make the mistakes of the last recession and give banks a pass on accountability. For banks’ employees and customers, everything is on the line—and much more can, and should, be done by the banks to help get our economy out of this pandemic-induced recession and prevent a housing apocalypse.

To start, we urge banks to extend one-year forbearance protections not only to all their mortgage customers but also to auto and student loan customers. Additionally, banks should halt layoffs until we have a vaccine, while making sure all frontline employees are afforded adequate protections so they can safely serve customers’ needs.

We’ve also invited these banks to join us in creating a USA Banking Crisis Committee that includes worker representatives to set industrywide standards impacting workers and customers. Many of the largest U.S. banks’ foreign peers and international divisions have already created similar committees, which have successfully reduced worker anxieties and helped ensure resources were directed efficiently.

Everyday Americans—those who suffered most from the big banks’ misconduct—did their part to save the economy in 2008, bailing out the banks from a crisis of their own creation. It’s time now for banks to step up and take action to meaningfully reduce physical and financial risk for their customers and their employees.

Erin Mahoney and Nick Weiner are organizing directors of the Committee for Better Banks.