Exit Interview: What Helena Foulkes learned about retail and leadership as CEO of HBC 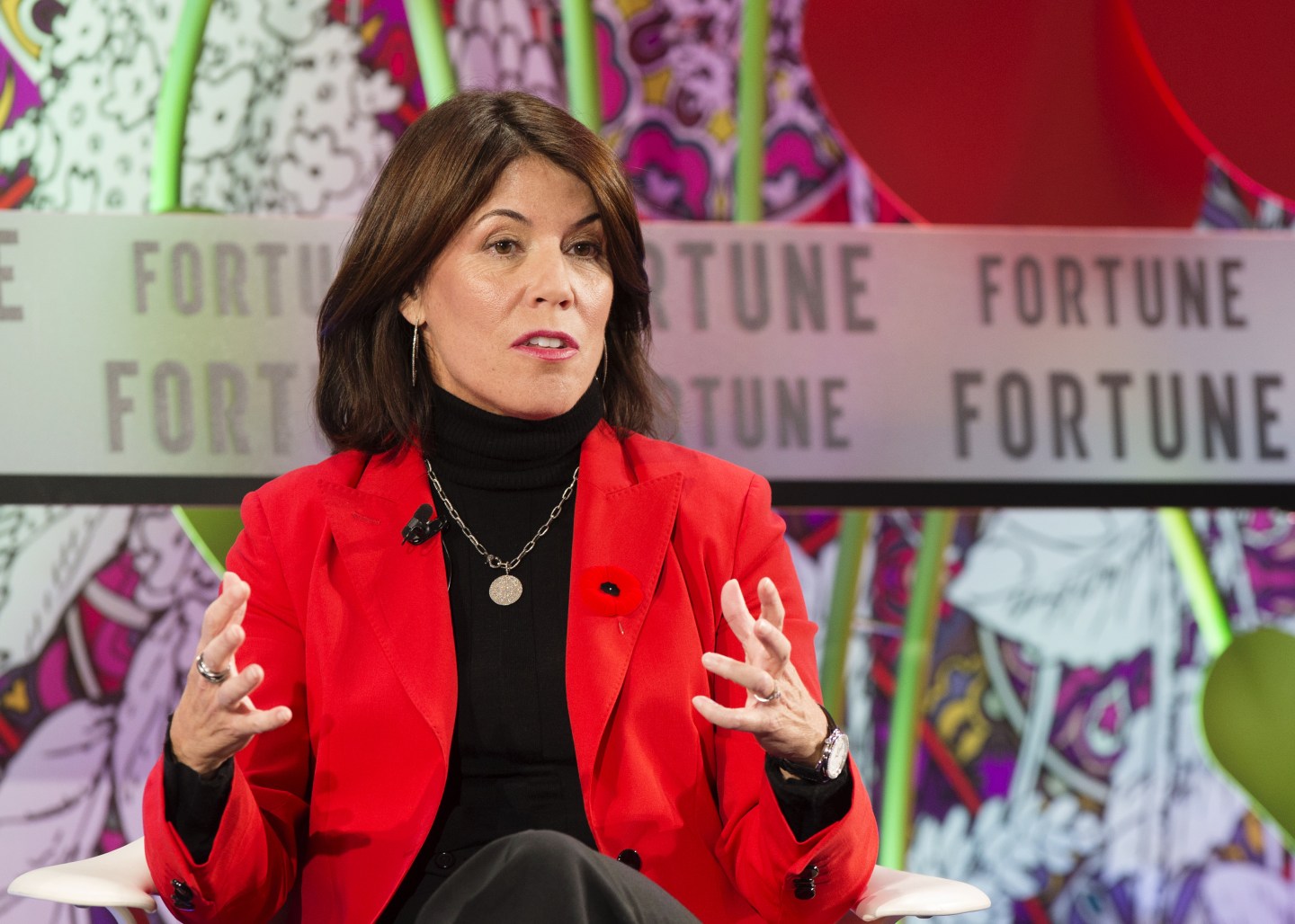 Helena Foulkes, former chief executive officer of Hudson's Bay Co., speaks during Fortune's Most Powerful Women International Summit in Montreal, Quebec, Canada, on Monday, Nov. 5, 2018. The summit addresses the potential of women in advancing global economic growth and how women business leaders can use their power and their platforms for good. Photographer: Christinne Muschi/Bloomberg via Getty Images
Christinne Muschi—Bloomberg via Getty Images

Helena Foulkes took the job of Hudson’s Bay Co. CEO two years ago, fully intending to clean up one of retail’s toughest messes. On March 13, she stepped down, having achieved a number of wins at the 350-year-old Canadian company, but not yet having met her ultimate goal: turning the department store conglomerate around.

Soon after her departure—she left the company as it went private to fix its remaining issues outside the glare of the stock market’s klieg lights—Foulkes spoke with Fortune. In a candid and wide-ranging conversation, she discussed the challenges the retailer faced under her watch, how she tackled them, and what she sees for the future, both for HBC and for herself.

Foulkes, 55, had been the head of CVS Pharmacy’s $80-billion-a-year drugstore chain for four years before taking the reins at HBC in February 2018. (She spent 25 years in all at CVS Health.) When she stepped into the top job, HBC was a sprawling hodgepodge of department stores—Saks Fifth Avenue, Saks Off 5th, and Lord & Taylor in the U.S.; the company’s namesake chain in Canada; and struggling German retailer Kaufhof as well as a handful of Hudson’s Bay stores in Europe.

Despite its bid to become an international department store empire, the company was hemorrhaging: In the full fiscal year ended just before Foulkes became CEO, HBC’s comparable sales fell 1.7%, and the debt-laden company’s operating loss came to $646 million on total revenue of $14.4 billion. The one bright spot in the portfolio was luxury chain Saks Fifth Avenue, which had turned a corner a year before Foulkes arrived and returned to growth.

Some might have been scared off by those numbers, but Foulkes says she saw potential. “I came because I thought this was a great opportunity to have a real impact on a global business and lead a transformation,” she tells Fortune. She was also drawn to the world of fashion and HBC’s iconic brands.

Almost as soon as she walked in the door, Foulkes, well-regarded for her successful stint at CVS, set about unwinding the retail Frankenstein’s monster that HBC had become, thanks to many ill-advised acquisitions. She also looked to shake up HBC’s insular culture, under which the various chains shared little with one another, whether in terms of best practices, resources, or even philosophy.

“We made a lot of bold moves really fast,” she says. During her stint at the helm, HBC unloaded flash-sale site operator Gilt Groupe only two years after buying it, sold the Lord & Taylor chain to Le Tote, exited Europe, shelved plans to expand Saks in Canada beyond its first three stores there, and closed dozens of Saks Off 5th stores. In all, these deals helped HBC pay down about $1.5 billion in debt, giving it a lot more breathing room to invest in retail fundamentals, including continuing a $250 million renovation of Saks’s iconic Fifth Avenue flagship that has reignited that store’s sales.

“We really shored up the business so we could focus on the crown jewels,” says Foulkes, referring to Hudson’s Bay and Saks, the two chains she saw—and still sees—as best placed in the HBC portfolio to survive retail’s department store storm.

But Foulkes wanted to build too, not just reverse bad M&A. So in her first few weeks at HBC, she went on a listening tour of stores and departments in the organization. Foulkes says she used those sessions to ask managers as well as rank-and-file employees, both in stores and at headquarters, questions like, What are three things the company should keep doing—or change? And, What does success look like in three years?

“It unlocks a lot of information,” Foulkes explains. “And anytime you’re in a new position, it allows you to learn from the team. This early on taught me where the opportunity was.” That information also helped her assess people’s strengths and, as she puts it, “get the right people in the right seats.”

The listening tour also revealed to Foulkes that she needed to take on the culture at HBC. As a longtime director at Home Depot, she knows firsthand what a strong culture can do for a retailer, where workers feel empowered but also accountable for the results of their work.

She found that there wasn’t enough emphasis on accountability or urgency at the company. Instead of thinking about what customers wanted, too many people stuck to tried-and-true projects that didn’t really improve HBC’s offerings. What’s more, the digital team seemed uninterested in coordinating its efforts with the stores’ teams, putting it behind rivals in the e-commerce wars. She says she tried to instill a “Fail fast, fail cheap” ethos in the company to get employees to be more daring or, at least, less afraid to try things. The tendency to play it safe had hurt HBC—as well as competitors like Macy’s and J.C. Penney—over the years. “It emboldened people to get out there and take risks,” she says.

Reflecting on her strategy, Foulkes notes: “When you have a lot to fix, I think the challenge is, Where do you spend your time and energy, and making sure you focus on the things that are big enough.”

Foulkes, who has maintained a regular meeting with a professional executive coach for the past decade, says that one effective tool she brought into the company was the use of the Net Promoter Score, a commonly used metric at consumer-facing companies that gives executives and their underlings regular, detailed customer feedback and how they rate versus competitors.

The initial effect of her efforts was good. The Saks Fifth Avenue business would soon regain its old luster, and Hudson’s Bay started to turn itself around. Discount chain Saks Off 5th, which had long lagged Nordstrom Rack, finally returned to growth.

By improving the company’s finances and the brands’ performance, Foulkes ultimately helped pave the way for the take-private deal. From a retail perspective, she helped position Saks Fifth Avenue to hold its own against Nordstrom and Neiman Marcus (a least for a while; more recently Saks has stumbled again). Online sales growth picked up speed during her tenure, hitting 20.6% in her last full quarter there from 6.8% in her first. Still, in a show of just how tenuous retail can be, Saks and Hudson’s Bay tumbled in HBC’s last quarter as a public company.

What’s next for Foulkes? She’s clearly a retailer at heart and says she hopes her next gig will be in the field—or at least one that is consumer-focused. And no matter the industry, Foulkes prides herself on her ability to motivate the troops and figure who is best at what.

“I loved being a CEO, and I’d do it again,” she says. “I’ve always believed you should play to your strengths. And I love building teams.”

—Accenture CEO Julie Sweet on her company’s rapid-fire transformation
—How to be effective when you’re presenting remotely
—15 powerful women share the personality trait that’s key to their success
—Google and Unilever use initiative to have better family-leave implementation
—Listen to Leadership Next, a Fortune podcast examining the evolving role of the CEO
—WATCH: The double burdens that hold women back