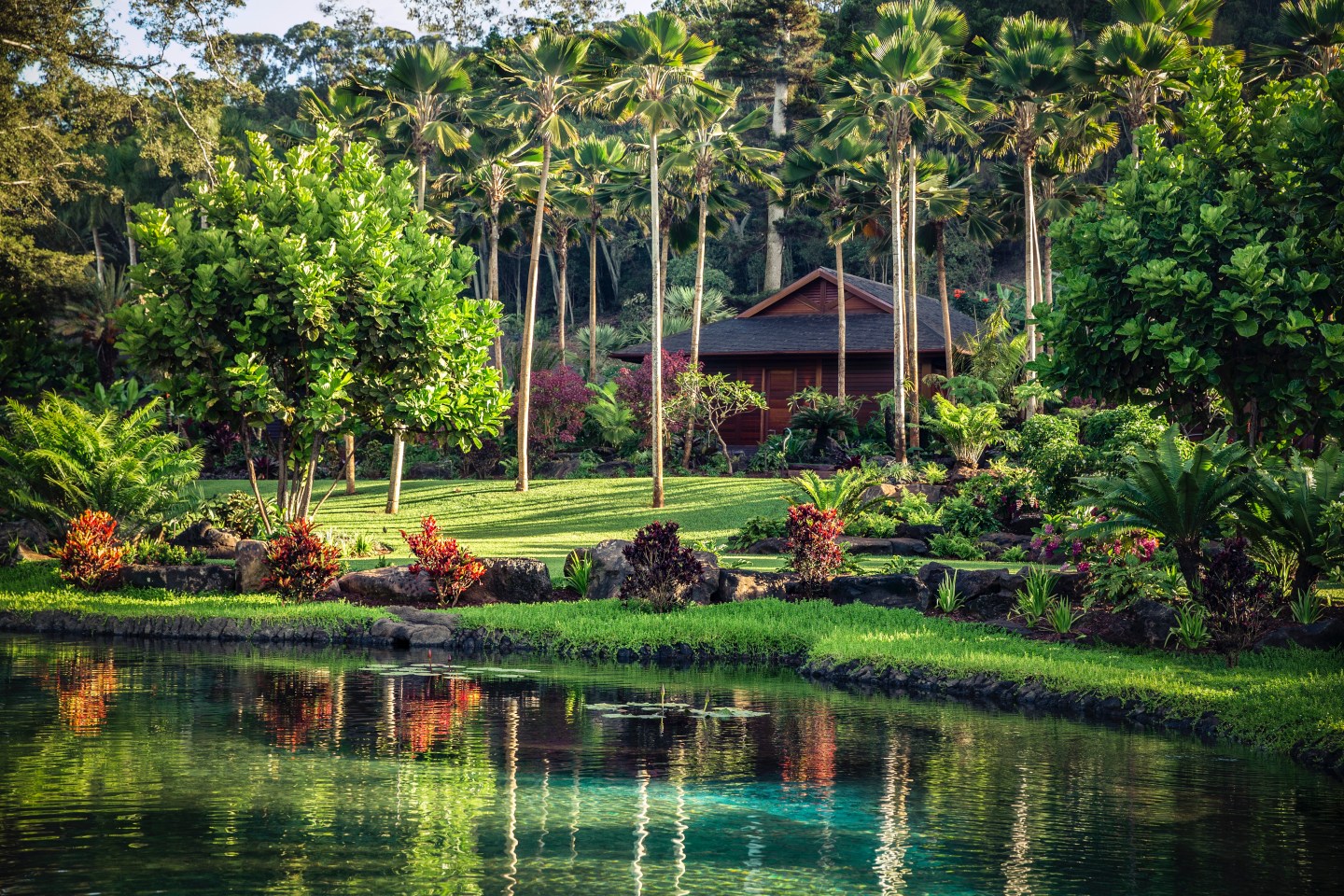 Forget what you think you know about all-inclusive resorts, this new product from Four Seasons—previously known as the Lodge at Koele—delivers restorative luxury on one of the world's most exclusive islands, Lanai. (Yes, the one Larry Ellison owns.)
Courtesy of Four Seasons Resort Lanai at Koele, A Sensei Retreat

The Hawaiian island of Lanai has had quite the history. It first gained renown in the 1920s when 98% of it was purchased by James Dole, who turned it into the world’s largest pineapple plantation. The final harvest took place in 1992, and things have mellowed out since. But in 2012, tech billionaire and Oracle founder Larry Ellison purchased that 98% (the rest is owned by the state) and has been upgrading Lanai’s cachet as a luxury holiday destination with Four Seasons as partner.

In 2016, following hundreds of millions of dollars and a seven-month closure, the beachside Manele Bay Hotel reemerged fully transformed as the Four Seasons Resort Lanai. And toward the end of 2019, the Lodge at Koele, a plantation-style hotel that was shuttered in 2015, reopened with an entirely new personality. It’s now the Four Seasons Hotel Lanai at Koele, a Sensei Retreat, a wellness-focused all-inclusive tucked away on the pine-covered slopes of the mountain.

Located just nine miles west of Maui, this rugged, green-and-red 88,000-acre rock—where there are no stoplights but plenty of feral chickens and turkeys—sounds, smells, looks, and feels like the perfect place for Four Seasons to unveil its first foray into the wellness arena. But wellness wasn’t what was first planned for the lodge when work on its reimagination began in 2015. “Initial thoughts were to renovate the interiors and reopen as a resort once again,” says Alastair McAlpine, general manager of both properties. “But we always challenged ourselves to think about how we could create new reasons for visitors to consider coming to Lanai.  And, of course, the property’s new focus on wellness is in line with industry trends too.”

Wellness made perfect sense for the owner, as well: In 2018, Larry Ellison introduced a new collaboration with longtime friend Dr. David Agus, professor of medicine at the University of Southern California, on the consumer wellness brand Sensei, which explores Agus’s three-prong approach to a healthy lifestyle: Move, nourish, and rest. This new retreat on Lanai allows guests a chance to embark on that wellness journey bolstered by Four Seasons’ luxury hospitality.

On the lush grounds of Koele (there’s no direct beach access here), the 96-room bolt-hole can really be anything, such is the visual narrative it presents. Brought to life by designer Todd-Avery Lenahan of TAL Studio, Four Seasons Hotel Lanai at Koele, a Sensei Retreat is, at the base level, a beautiful place to take a vacation. Tranquil water features—from a koi pond to a reflecting pool affixed with a wooden platform for yoga to a saltwater pool—are surrounded by not just a wild medley of colorful flora but also large-scale marquee art installations, including a voluptuous sculpture by Fernando Botero and stark-white pieces by Jaume Plensa.

In fact, if guests hadn’t completed a questionnaire and engaged in a planning call with the Sensei team ahead of arrival, they could be forgiven for forgetting they were entering a wellness resort altogether. Immersion into this new product is meant to be both comprehensive and upscale, which is why Four Seasons opted for a first-for-the-company all-inclusive model. But banish visions of piña coladas around a crowded pool of children and coeds. “The idea behind it was to offer a luxury experience that was completely customized,” McAlpine explains.

The nightly rate starts at $2,800 for single occupancy in a newly refreshed Koele room, which is swathed in a serene palette of white and cream. There’s a three-night minimum for booking, and if a couple were to share the room, the rate goes up to $4,500 a night. But when Four Seasons says all-inclusive, it means it. Air transfer from Oahu to Lanai is included as well as a Tesla pickup from the airstrip. And once there, guests would have to try really hard to find something that is not part of that pricing structure. (Mainly, it’s the premium wines and spirits that are extra.)

Promoting “The Sensei Way” as its brand, the hotel outlines three practices designed for guests to “maintain a conversation” with their bodies and minds: movement, nourishment, and rest.
Courtesy of Four Seasons Resort Lanai at Koele, A Sensei Retreat

The pre-trip call and questionnaire determine the basic framework of a guest’s itinerary. Depending on what his or her goals are, this fully customizable program can be as loaded or as bare as desired. A meeting with a dedicated Sensei guide serves as orientation not just to the property but also to what lies ahead. “No one’s wellness journey is the same, therefore every guest will have a unique Sensei Retreat experience,” says Sensei CEO Kevin Kelly. “We create software and hardware products to help us efficiently gather data and utilize a science-based rating system to methodically research and build wellness programs that allow us to seamlessly curate a guest itinerary and deepen the experience.”

The Sensei guides are experts in their fields and often hold advanced degrees in relevant lines of study. They’re there to help guests implement healthier practices that would start at the retreat and hopefully extend beyond their stay. And the “move, nourish, and rest” approach can help simplify what that all means through one-on-one consultations about mental health, fitness, and nutrition, but also through the content of the itinerary, which could feature personal training, group meditation, scenic hikes, and spa treatments. Make no mistake: A personalized Sensei experience is not just about quiet time or eating salads. An itinerary can also include off-roading to discover Lanai’s rugged terrain, sunset sails around the island alongside whales, or horseback riding in the woods.

Guest itineraries are built based on pre-arrival consultations with the Sensei team, and once there, it’s all about yoga, spa treatments, meals by Nobu, and whatever else might assist on their wellness journeys.
Courtesy of Four Seasons Resort Lanai at Koele, A Sensei Retreat

Speaking of the spa, the retreat’s Japanese-Hawaiian-style hales are some of its most spectacular features. Ten in total, these 1,000-square-foot relaxation hubs are fashioned out of warm chocolate wood and are equipped with deep ofuro tubs, dry saunas, outdoor showers, and two soaking pools (one cold, one warm). Availability permitting, guests can weave in as many treatments into their itineraries as they want—from a specialized body-mapping massage that uses Sensei-developed thermographic technology for a more targeted rubdown to a skin-hydrating facial. Similarly, enjoying “hale time” amenities has become a popular way for guests to unwind. Otherwise, there’s still the stunningly rustic onsen tubs scattered around the property.

And if a guest returns famished? The brand-new Sensei by Nobu, featuring a menu crafted alongside Sensei’s nutritionists, can whip up as indulgent a meal as required. “A Loco Moco made with quality wagyu beef and care in preparation serves that guest at that moment,” McAlpine says. “And it can provide an understanding that this journey to wellness is one that is ongoing and needs to reflect how people live, and work with their habits in life, to ultimately succeed.”