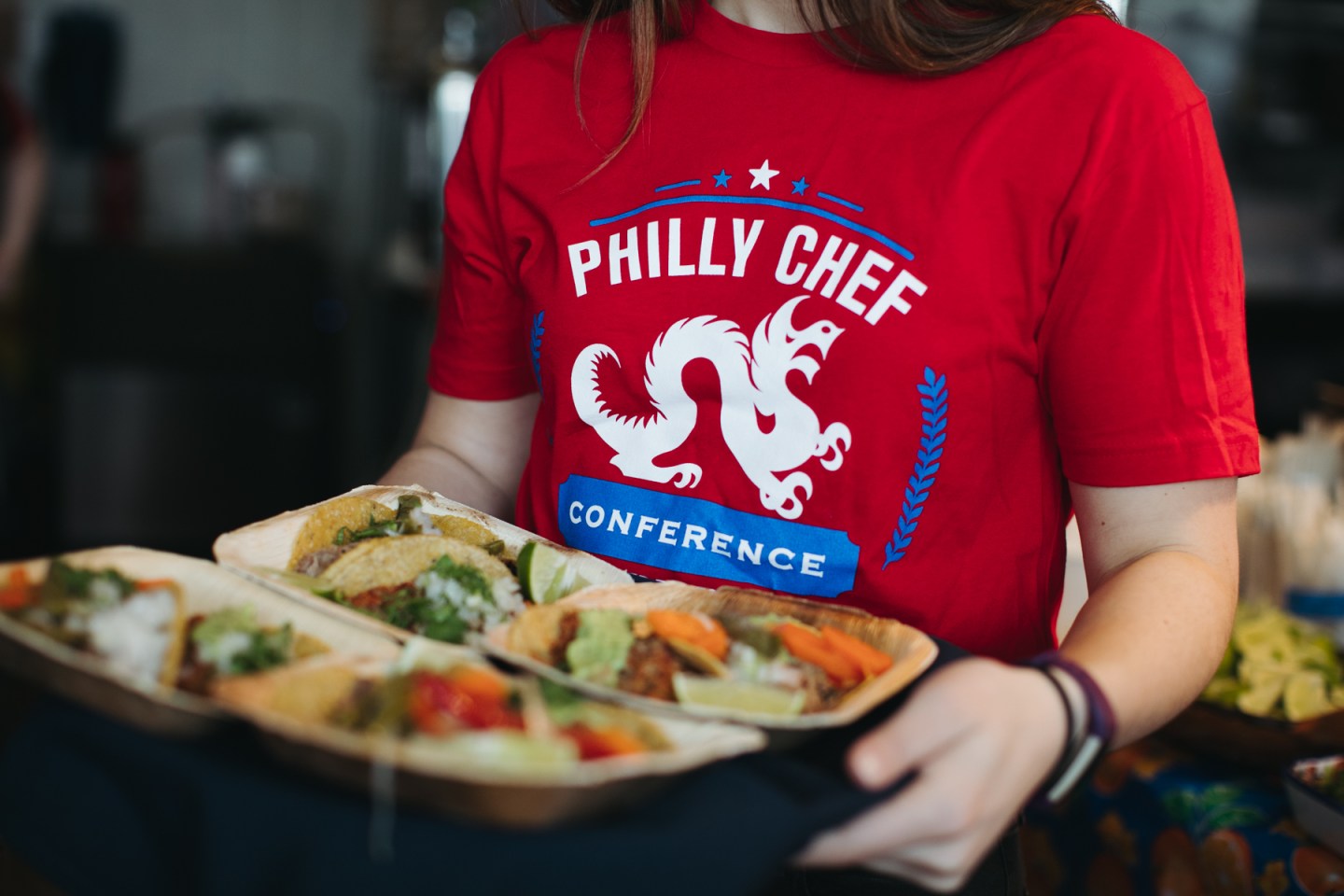 Traud began his career as a lawyer, but with a lifelong passion for food, he took a leap and landed a job working for chef Marc Vetri in 2007, which in turn led to a part-time job teaching hospitality law at Drexel. “One day a week, I would prep pasta at Vetri in the morning, go teach a three-hour law class, and come back and work service,” he says. Two years later, the university offered Traud a full-time job teaching, and he got his doctorate in education soon after.

Now in its seventh year, the Philly Chef Conference was one of Traud’s first initiatives to bridge what he saw as a gap between the food industry and education. In the beginning, the conference focused on Philadelphia—bringing together local chefs and restaurant industry professionals. But in the relatively short span that has followed, it has exploded into an event that draws the most notable names in the food world for two days of panels, live demonstrations, and discussions. (And so much eating.)

One impetus for the shift was to bring new voices into the discussion. “If you go to a conference where the same people are talking to the same people, it doesn’t mean anything,” Traud says. Since then, it’s grown to focus on national and international players, which, Traud says, engages the community and spreads its network. “All these industry leaders gather and talk for two days in Philadelphia. People are coming here to discuss and connect,” he says, before adding with a smile, “like in 1776.”

Besides impacting the school and its students, the conference has become important to the city of Philadelphia writ large. “I’m trying to bring these leaders to Philadelphia, because it benefits my students, and it benefits our community,” Traud says. “It shines a light on what’s going on in food here. So it’s not like people are just coming to Philadelphia, flying in and flying out. These journalists are going to spend three days walking around everywhere, getting to see the best of Philadelphia. It becomes that little gateway into [our city].”

While intimate and informative kitchen demonstrations cover pairing tea and pastries with Copenhagen-based baker Richard Hart, or pasta making with Rezdôra’s Stefano Secchi, the conference also covers challenging subjects. This year, journalist Priya Krishna will moderate a talk titled “Diversity in the Kitchen: The Road Ahead” with panelists including Claudette Zepeda of San Diego’s El Jardín, and chef Erick Williams from Virtue in Chicago. Other topics have included sustainability and climate change, the #MeToo movement, and mental health.

“In the grand scheme of things, these are the conversations that should be happening right now,” says the director. “It’s not all hugs and kisses. There are tough topics that need to be discussed, and if we’re going to foster these discussions and have these tough questions, you want the right people in the room.”

Chef Ben Shewry traveled from Australia to attend last year, and says he loved the experience: “I think that Mike gives people a forum to speak their minds openly in an environment that is nonjudgmental, inclusive, and safe. The program is incredibly varied; there’s something for everyone, and not just the usual lineup of famous male chefs. Due to Mike’s leadership, the Philly Chef Conference has become an important voice in American food.”

Writer Nikita Richardson, who went for the first time last year and will return this March to moderate a panel on indie food magazines, agrees that the conference is inviting and unpretentious, and compared it to prom. “You’re getting together with your people to celebrate something you all love. In this case, food.” Richardson hadn’t heard of the conference before last year but noted, “Any chance to go to Philly is a chance worth taking, and the lineup of food writers was pretty stunning.”

Lukas Volger, author of cookbook Start Simple, among others, is looking forward to his first conference this year, and will sit on Richardson’s panel to discuss his queer culture and food magazine, Jarry. “For me, it’s an incredible gathering of people,” he says. “I’m so excited and intrigued by the range of expertise, from recipe writing and magazine editing to cutting-edge food science restaurants in the 20th century. [It’s a] very rare chance to get so many perspectives in the same room together!”

The conference will kick off this year on Sunday, March 1, with live Heritage Radio podcast shows, a Gordinier-led panel about food memoirs that includes chef Kwame Onwuachi, and a reception showcasing some of Esquire‘s best new restaurants: Bon Temps from L.A., Rezdôra from New York, and Philadelphia’s own Pizzeria Beddia, along with local favorites like South Philly Barbacoa and Palizzi Social Club.

Most attendees leave feeling enriched, connected, and full of some of the world’s best bites. For Traud, though, the best part of the conference is when his students get something meaningful out of it—and even leave with an internship with one of the world’s best chefs.

—The drinks America’s best bartenders make for themselves
—Miami’s Balloo is a personal tribute to the chef’s Chinese, Indian, and Trinidadian roots
—Inside the most influential fashion show in menswear
—5 things Madewell’s CEO always packs when traveling
—WATCH: Can San Francisco Be Saved?