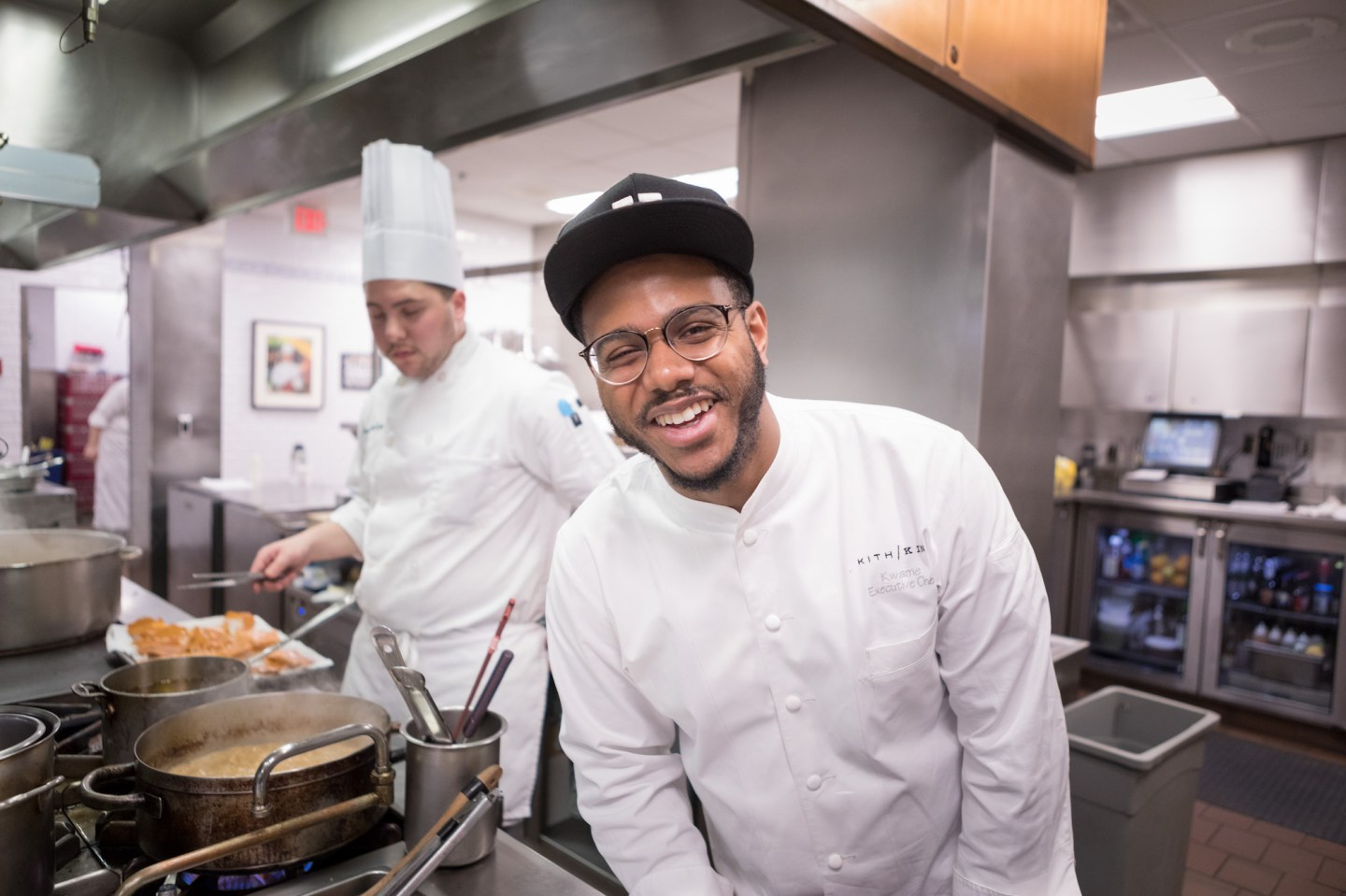 On the outside, 2019 looked like a huge year for 30-year-old Nigerian-American chef Kwame Onwuachi: The James Beard Foundation awarded him “Rising Star Chef of the Year,” Food & Wine called him a Best New Chef, and Esquire doubled down, naming him Chef of the Year and his restaurant Kith/Kin one of the best new restaurants. His memoir, Notes from a Young Black Chef, came out to rave reviews, and he was named to the Time “100 Next” list.

“Awards and accolades are great,” Onwuachi says of the things he’s been chasing his whole career. But looking forward, he has a new marker for what success will look like to him: letting his mom retire.

In his book, Onwuachi tells the story of rising as a caterer and chef and of his mother’s struggles to raise him while working as a caterer herself. “She worked very, very hard her whole life,” he says. And now the former Top Chef contestant says his new definition of success is to be able to afford to take care of her so she doesn’t have to work. It’s an issue that Onwuachi also looks at through a systematic lens—how he can make changes in the culinary industry for groups—like black women—who have long been pushed to the edges or out of it.

Chef Kwame Onwuachi passing out signed copies of his book, “Notes From a Young Black Chef.”
Courtesy of The Culinary Institute of America

Onwuachi keeps a fierce pace—he’s involved with the movie being made of his memoir starring Lakeith Stanfield, is at work on a cookbook, and in addition to Kith/Kin briefly operated a fast-casual chain called Philly Wing Fry. Staying hungry and not becoming complacent or stagnant are other top goals for the year: “You have to adapt and change.” But as he chooses where to place his efforts while riding the current wave of success, the top thing he looks at is the impact he can make.

“There are so many ‘-isms’ that can be blanketed with the bravado of hazing,” Onwuachi said of how the industry treats women and people of color during a recent interview as part of the Culinary Institute of America’s “Conversations at Copia” series in Napa. “It prevents people of color from rising.”

Conversations at Copia
Courtesy of The Culinary Institute of America

As he shines a national spotlight on inequity at the same private institute he discusses in his memoir struggling to afford, he also recently went up to New York to speak to women running catering operations out of their homes in the projects (as he did early in his career). “They can get answers to their questions, not from people that are looking down on them from some other pedestal without an understanding of what they’re going through. They have someone that’s been there, that’s gone through that.”

But even his smaller decisions have a bigger impact now. “These things that were hyperlocal in terms of my goals and what I was trying to do, they’re a bit more mapped out now,” he says. “I have to be careful of what I say yes to and make sure I’m making the right decisions moving forward, because they’re not just like a yes or no to this one thing; those yes or noes affect a lot of people.” Those people—particularly his staff—are a huge part of how Onwuachi looks at what he’s doing.

One of the lessons Onwuachi learned over the defeats in his career, he says, is there’s no such thing as a dream restaurant. “A restaurant is more than just the food,” he says. “It’s the way you make people feel when they eat, and the way they feel when they come in and work.” And so now, his dream restaurant has less to do with serving the perfect series of luxury dishes over nine precisely paired courses and more to do with the bigger picture of the concept of hospitality: “I just want to create an environment that people are simply happy to be there and there are tools to become a better person, in and outside of those four walls—focusing on mental health and inclusion, talking about inequity and things like that.”

Still, as focused as his outlook is on the greater good, Onwuachi’s food remains intensely personal, from what he cooked in his 2015 tenure on Top Chef, to the kitchen of Kith/Kin, as well as those that came between: Philly Wing Fry and his short-lived sky-high aspirational restaurant the Shaw Bijou. In his upcoming cookbook, he’ll feature Afro-Caribbean recipes, including ones from his own Nigerian, Jamaican, Southern, and Creole roots. The food, Onwuachi explains, “follows the path that West Africans took when they were ripped from their land to America: starting in West Africa, went to the Caribbean, then to the American South.

“Every dish should tell a story,” Onwuachi says of why his food philosophy stays so close to his own experience. “I am who I am, for sure: I’m myself, an open book, raw and real.” And that makes all the difference in the food, he adds: “That’s when it resonates with people; it resonates with my staff; and it resonates with me, myself.”