Miami’s Balloo is a deeply personal tribute to the chef’s Chinese, Indian, and Trinidadian roots

Balloo might not be a hurricane, but the storm it’s creating will have an effect on the city for years to come.
BYAdam Erace
February 16, 2020, 12:00 PM UTC 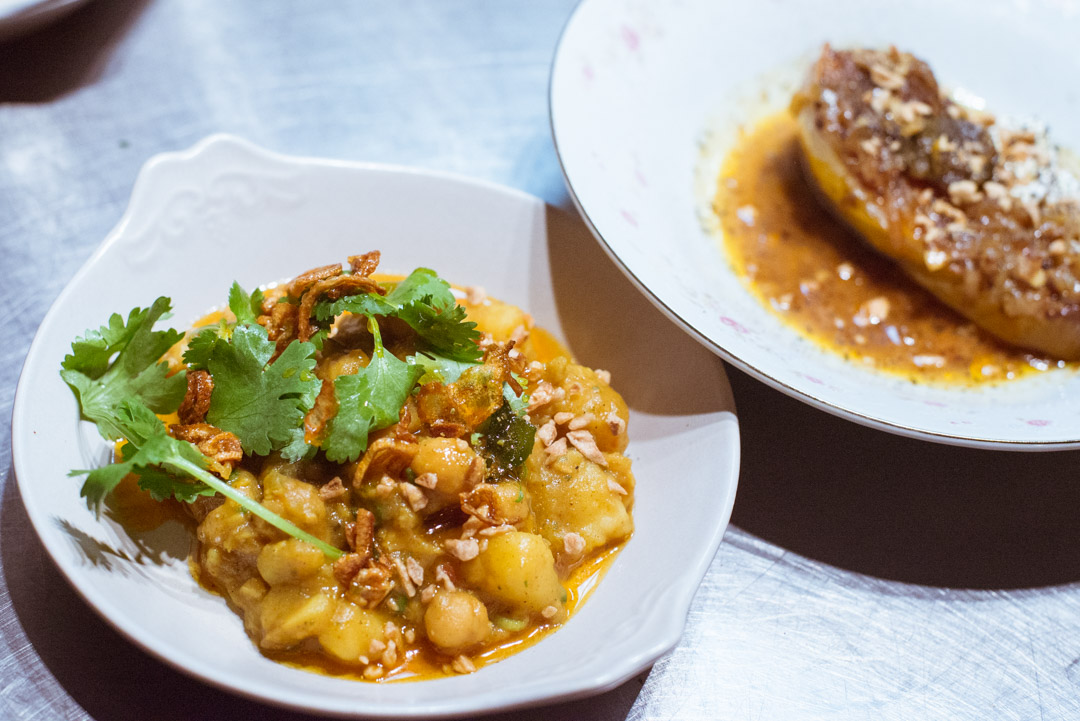 Balloo does the unthinkable, expertly blending Indian, Trinidadian, Caribbean, and Chinese flavors under one roof, on one menu.
Giovanny Gutierrez

The Ingraham Building has seen things. Back in the summer of 1926, a few months before Schultze and Weaver—architects of the social climbing hothouses like The Biltmore in Asheville in Coral Gardens and The Breakers in Palm Beach, Fla.—completed the downtown Miami tower, a ferocious storm swept in from the Caribbean. This was before the hurricanes had names, which is how this one came to be known simply, menacingly as the Big Blow. Rising 13 stories above the floodwaters, the Ingraham Building survived, but the storm shredded Miami like a piñata. It also fast-tracked the collapse of the rapacious real estate boom that created South Florida as we know it.

Over the following century, the Ingraham Building would observe downtown’s shifting fortunes, from after-dark ghost town to speculator darling and back again as South Florida reprised its role as the canary in the condominium coal mine. A decade-plus removed from the recession, downtown is up again. “Everything is happening away from the beach,” a Miami friend tells me as we’re served a peachy skin-contact Slovenian number at Balloo, a tiny Caribbean restaurant glowing like some Burtonian netherworld at the end of a desolate white hallway in Ingraham Building’s ground floor.

Loops and splinters of turquoise neon spell out “Balloo” at the corridor’s terminus, beckoning diners forth. This is the name of the improbable, 21-seat restaurant as well at the name of its chef and owner, Timon Balloo, whom locals know from Sugarcane, the mojito-slinging Midtown Miami mint with offshoots in Las Vegas and Brooklyn. He’s still a partner there, but you can feel him putting distance when the chef says, “The corporate Sugarcane thing is what I’m supposed to do, the adult thing to do, and what I’m referencing like my nine-to-five. Then Balloo is my Sunday barbecue, and you’re coming to my house.”

Piled atop perfect pigeon peas and rice, the oxtails represent the Sundays of Balloo’s childhood growing up in San Francisco and Fort Lauderdale with his mother, who is of Chinese and Trinidadian descent. The dish is marinated in a classic Trini green sauce (cilantro, celery, Scotch Bonnets, onion, and ginger); seared in a scorched pool of caramel; then cooked under pressure until luscious, lacquered, and gelatinous in all the right places. A salad accompanies: pickled red onions, a hemisphere of creamy Caribbean avocado, and halved cherry tomatoes so sweet they should be sold in the candy aisle, tied together with tamarind dressing that makes your lips pucker and balances the richness of the beef.

This dish feels like home cooking, and the 800-square-foot dining room looks the part, with black-and-white family photos hanging in mismatched frames on the chartreuse and viridian walls. Plastic floral-print covers cloak the tabletops, and a homey red hutch functions as the service station. The only giveaway you haven’t stumbled into a family party at somebody’s island cabin is the ceiling. Between the woven basket lamps and ferns hanging upside-down like primordial green bats, crackled plaster and concrete beams bear the weight of the Ingraham’s upper floors.

While downtown is being touted as Miami’s next great neighborhood, rents are still reasonable. A mutual friend of Balloo and his partner—cocktail wizzes Gabe Orta and Elad Zvi (of Miami Beach cocktail bar Broken Shaker, now with outposts in Los Angeles and Manhattan)—found the quirky, out-of-the-way space with baked-in Caribbean energy. At various times, the Ingraham has been home to the Consulates of Jamaica, Antigua, and the Bahamas. Meanwhile, the low financial risk let Balloo create a deeply personal restaurant, as well as begin to make peace with his estranged father.

Balloo’s parents divorced when he was a baby. His relationship with his father was always off and on, mostly off. “I grew up most of my life pushing away my dad’s Trinidadian and Indian culture. I identified more with my mom’s side because it was a way for me to personally not acknowledge him,” he says. “That’s why it’s taken me over 25 years. I had to not only find my culinary voice, but I had to heal and learn and grow as a human to get to this place.”

Balloo’s father died at the end of 2018. The restaurant opened a year later. Father and son never reconciled, but putting his name on the proverbial door was a way for the 42-year-old chef to embrace his identity. “It wasn’t there to pay tribute or glorify him. It was more for me to just say, ‘This is who I am.’”

The dining room of Balloo, housed inside The Ingraham Building in downtown Miami.
Giovanny Gutierrez

On the plate, who Balloo is comes across in dishes like spicy jerk beets as red-violet as fresh big-eye, arranged over creamy Madras curry aioli and speckled with fried garlic chips. If you’re wondering, Do I really need to eat another beet salad? Yes, you do, but only this one. Balloo turns something so tired into a fresh, exciting expression.

The Sichuan-inspired cucumber salad, meanwhile, is exactly the dish you’ve had many times before—and not a particularly memorable version. Crunchy shredded cabbage is like packing filler for the chunky cross-cut cukes, and the fermented chili oil is strangely modest on the umami and heat. Cabbage finds a more suitable home later in the meal—charred, peeled apart, and layered into a singed, smoky beehive like some great, cruciferous Baked Alaska. There’s pork belly, too, but instead of Lego-sized lardons, big Duplo blocks, and lots of refreshing cilantro, crushed peanuts, and spicy, citrusy namprik dressing. It’s a brawler. The Southeast Asian vibes nod to Balloo’s wife, Marissa, who is Thai and Colombian.

“We’re mixed, our kids are mixed, our pantry is mixed,” Balloo says. “Any given day of the week, we go from sancocho to dim sum. That’s how we eat.”

The Caribbean is a place of mixed cultures—indigenous Taínos, European colonizers, African slaves, indentured laborers from Asia—and that plays out in the islands’ cuisines and in the cooking at Balloo. Like the beet dish, the charred calabaza references the migration of sugar plantation workers from India with a wide crescent of common Caribbean pumpkin fried in garam masala oil, then braised with lime juice and curry leaves. Soft enough to eat with a spoon, the calabaza is plated up with a scroll of buttery, chewy roti and Persian shout-outs of bitter, sour grated black lime and thick, tangy labneh. “Mash it all up together and eat with the roti,” my chipper server advises. Balloo compares it to hummus and pita.

Another roti comes with the Jamaican-style curry goat (not complaining), which was not as tender as the oxtails (complaining). “At first I wanted to do it real soigné with proper cuts, but then [decided on] the true curried goat you’d get at the house,” which is stew meat mix. I think his original chef instincts were right here; going with a single cut, like the leg or shoulder, would create a more consistently tender texture. Whatever the case, the star of the dish is not the animal, but it is the aloo chana, a broth stew of soft potatoes and chickpeas brightened with cilantro and lime.

I feel similarly about the Florida snapper, whose floured-and-fried fillets go from crisp to gummy once sunk into steaming coconut curry jacuzzi. What a curry, though! A pounded paste of lemongrass, galangal, garlic, and chiles suffuses fish stock (made from the snapper skeleton) creamed out with coconut milk. Fish sauce adds a touch of marine funk. Cilantro and Thai basil check the fat. Meanwhile the bowl bursts with strapping bok choi, carrots, pumpkin, and fluffy, aromatic jasmine rice—snapper who?

There’s only one dessert: a vanilla-and-peanut butter pudding that sounds neither exciting nor in tune with the rest of the menu. But then you get into it and find hidden chunks of banana that rattle you with their surprise acidity (they’re marinated in lime juice) and crushed peanut butter cookies full of salt. Smooth and balanced, the pudding is perfect wave to ride out on, down the eerie Ingraham hallway, backlit by the blue neon, into the breezy Miami night, where a storm was already brewing.