How a ’90s cult rock band flourishes despite industry odds 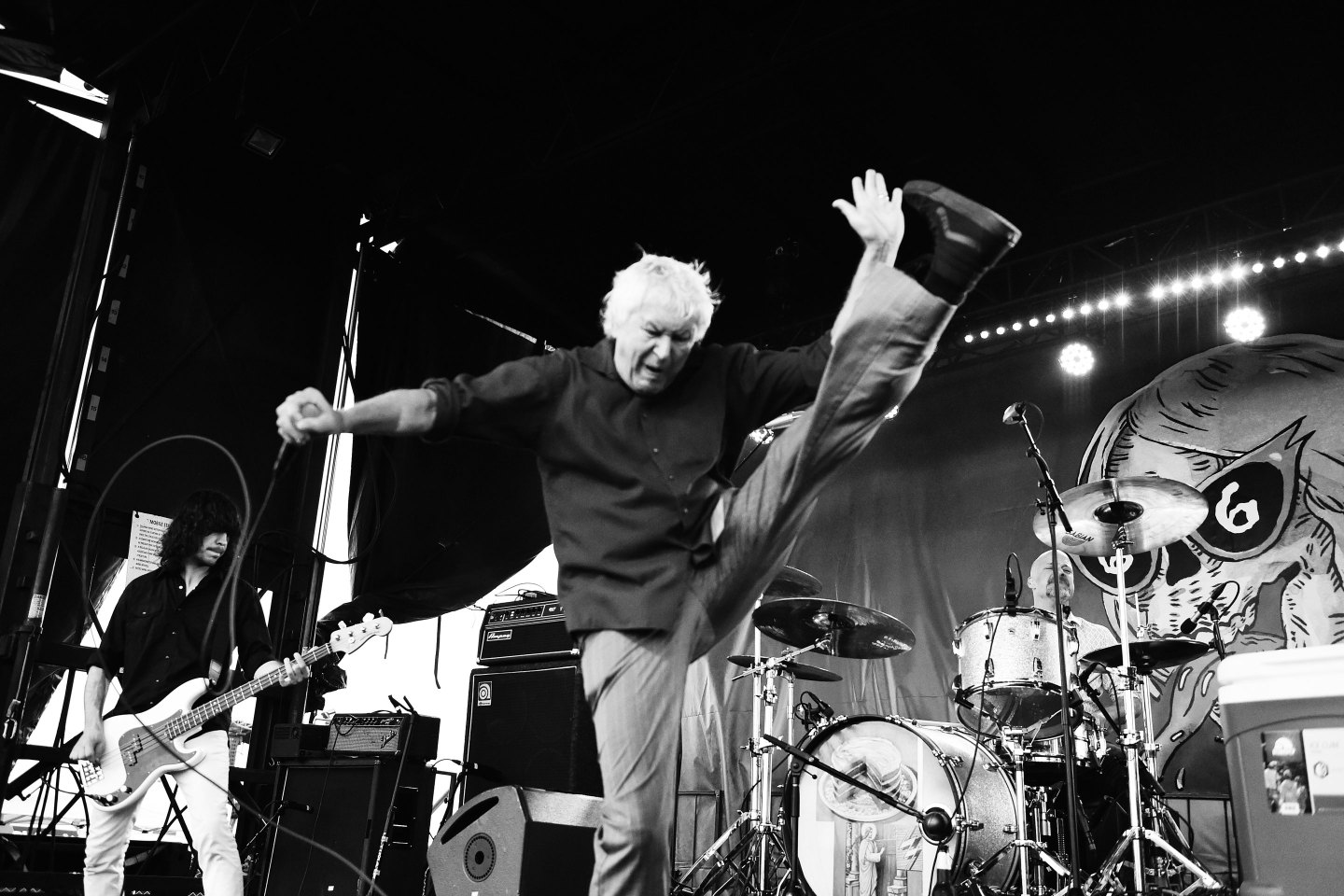 Guided by Voices broke out during the 1990s grunge boom. In 2020, their mainstream peers, like Smashing Pumpkins, Foo Fighters, and Pearl Jam, tour in luxury buses and headline Madison Square Garden.

Meanwhile, GBV eat tepid pizza in midsize clubs’ tatty greenrooms and cram their gear, their merch, and themselves into a rental van.

The silver lining? Self-signed and commanding a devout fan base, the band enjoys creative autonomy almost unheard-of for a major rock band.

“I can do whatever I want,” their 62-year-old singer, songwriter, and only original member, Robert Pollard, tells Fortune. “I have no obligations other than making records and playing shows. And these are obligations only to myself as an artist.”

Guided By Voices at First Avenue on Dec. 30, 2018, in Minneapolis.
Tony Nelson

Their 30th—and Pollard’s 106th altogether—Surrender Your Poppy Field will be released Feb. 20. (In 2019 they released Zeppelin Over China, Warp and Woof, and Sweating the Plague.)

Between album releases, they play three-hour shows, mostly in U.S. clubs, while promoting an annual fan gathering, beer partnerships, and a journal series of Pollard’s collages.

Whether through side hustles or sheer productivity, Guided by Voices have carved a more attainable path to rock stardom through artistic integrity and business savvy.

“These days, we work twice as hard to make half as much money,” Newgarden says, but Guided by Voices make it work.

Guided by Voices made their 1990s classics in garages and basements, but their current lineup is spread across four states, and they record while more than 600 miles apart. Pollard makes a demo, the band members learn it individually, then they rehearse and record at Serious Business Music in the Dumbo neighborhood of Brooklyn. Pollard often tracks his vocals at Stillwater Lodge, an event rental and Airbnb space in Dayton.

“I used to have to learn the songs on guitar and teach them to my band. I don’t have to anymore,” Pollard says.

“We all typically work on rehearsing and learning the songs individually at first,” Shue tells Fortune.

This remote technique is made possible by Travis Harrison, GBV’s engineer and producer who runs Serious Business. “Bob’s writing sometimes happens almost spontaneously,” he tells Fortune. “I focus on keeping the flow of the process intact.”

“Everything is running smoothly, especially in the recording department,” Pollard says. “I’d like very much not to screw that up.”

After an album is written, recorded, mixed, and mastered, it’s released on the band’s in-house label.

Guided by Voices first took a stab at creating their own label in 1992, when they released Propeller on a run of 500 records with individually homespun artwork. Lacking a label at the time, Pollard dreamed up his own—Rockathon, referenced in the Propeller ballad “Weedking.”

Propeller was meant as their last before Pollard—then an elementary school teacher—prioritized his day job for good. Instead, it broke Guided by Voices into indie stardom, leading them to sign to Scat Records for 1994’s Bee Thousand. (After Matador Records signed GBV and advanced them almost $100,000, they recorded 1995’s Alien Lanes for $10.)

In 1996, Pollard and childhood friend Pete Jamison rebooted Rockathon to release GBV odds and ends separately from Matador. Today, it’s run by Matt Davis and Mike “Heed” Lipps as GBV Inc.’s financial and operational wing. They ship about 5,000 packages a month on stolen weeknights and weekends.

“It’s a labor of love that we’re honored to do,” Lipps tells Fortune.

Davis and Lipps coordinate with the band’s distribution partner, Revolver, record pressing plants, and the printing company for EAT, Pollard’s ongoing journal of his collages.

Two samples of Pollard’s collages: “Big Side Effects” (left) and “Go Back for More Legitimate Risks” (right).
Courtesy of robertpollardart.com

Rockathon’s art department is run by Joe Patterson and Pollard’s wife, Sarah Zade-Pollard. When it comes time to create a GBV album layout, Pollard, a prolific collagist, often meets Patterson at Wings, a Dayton sports bar, with new works at the ready.

“Some of [them] can fit in the palm of your hand, and others are as big as a poster,” Patterson tells Fortune.

Aside from album art, Pollard sells original works on RobertPollardArt.com, an online gallery run by Zade-Pollard. “Most mornings are spent processing orders,” she tells Fortune. “He’ll often ask me my opinion on colors or a particular image’s placement within a piece.”

Zade-Pollard also prepares certificates of authenticity, corresponds with buyers, and sets up art showings at galleries like the Irma Freeman Center for Imagination in Pittsburgh.

It’s certainly not all mundane admin work, though: Guided by Voices are a hard-partying band, and that figures into their business as well.

Buckets labeled “Piss” and “Puke” sit onstage as Guided by Voices performed what was billed as their “final show” on Dec. 30, 2004, at the Metro in Chicago.
Matt Carmichael—Getty Images

Almost every year, Lipps throws Heedfest, a rambunctious bash in Dayton for the GBV devoted. There are only two rules, as per the website: “1) Love Bob. 2) No Assholes.”

Heedfest began as a low-key barbecue and kickback in 2007 before ballooning into a three-day party. In 2019—which, Lipps says, was their most successful year to date—they offered all-you-can-drink Miller Lite and cover bands with names like Giant Bug Village and the Textbook Committee, as well as a performance from GBV themselves.

“Where else can you meet your rock heroes, talk to them, and share a few beers?” Lipps asks.

Guided by Voices’ songbook is full of boozy anthems like “Drinker’s Peace” and “How’s My Drinking?” and Pollard’s onstage bit—mic in one hand, beer (after beer) in the other—has led to branding opportunities.

In 2014, Dogfish Head launched “BEER Thousand,” an imperial lager, in honor of the 20th anniversary of Bee Thousand. Its founder, Sam Calagione, is a GBV fan who listened to the band while drawing up plans for the company.

“No band sells as much beer per customer,” Newgarden says of GBV’s live show. And at the dawn of the decade, he says, they performed their longest one ever—by far.

Performing 100 songs in a row

Last New Year’s Eve, Guided by Voices played a staggering 100 songs without a break at Los Angeles’ Teragram Ballroom. Despite the show’s length (4 hours and 20 minutes) and the physical exertion required to meet it, the band pulled it off.

“I don’t know if it could’ve gone any better,” Gillard tells Fortune.

“Most bands don’t come close to having 100 songs in their career,” Harrison says.

At $100-per-ticket admission in a sold-out 600-capacity room, plus sales of T-shirts, records, and CDs, and a poster of the setlist, the New Year’s blowout was arguably a cash boost. It helps that the band’s rider and overhead are negligible.

“All we need is beer, a bottle of tequila, a bloody Mary bar, a deli tray, and two large pizzas after a show,” Pollard says. “We’re easy.”

Aside from drumming for hours on end, March drives the van, sets up merch, collects payment from the venue, checks into hotels, and keeps morale high overall.

“[I] make sure Bob gets to the venue when he would like to be there,” he tells Fortune. “Tour managing is kind of second nature to me.”

Pollard at the Reading Festival in 2002, left, and in Las Vegas in 2010, right.
Hayley Madden—Redferns/Getty Images; Denise Truscello—Getty Images

Post Surrender Your Poppy Field, Guided by Voices have two more 2020 albums in the can.

And as the band rides the buzz of the 100-song set, Newgarden aims to keep their bottom line “thrifty and efficient” while being receptive to unconventional promotion ideas.

“We are excited about what we are doing,” Harrison says. “We all love each other.”

At the 100-song blowout, Guided by Voices pulled out one of many deep cuts: 2014’s “The Littlest League Possible,” a song staking Pollard’s claim on his modest kingdom, which was left off setlists for five years but brought back at the L.A. club.

“To be the biggest fish in the smallest pond,” he sang to disciples in the pit, “on the littlest island where I shall reside.”

—With Sonic the Hedgehog big at box office, Paramount catches “lightning in a bottle”
—Rob McElhenney on exploring misogyny and censorship in gaming with Mythic Quest: Raven’s Banquet
—Portrait of a Lady on Fire filmmaker Céline Sciamma on the female gaze and her ‘architecture of desires’
—Contagion writer, scientific adviser reflect on film’s newfound relevance amid coronavirus crisis
—Ava DuVernay on the “radical act” of black love in OWN’s Cherish the Day
Follow Fortune on Flipboard to stay up-to-date on the latest news and analysis.