With a strong consumer economy, Walmart is on the hook for any slowing sales 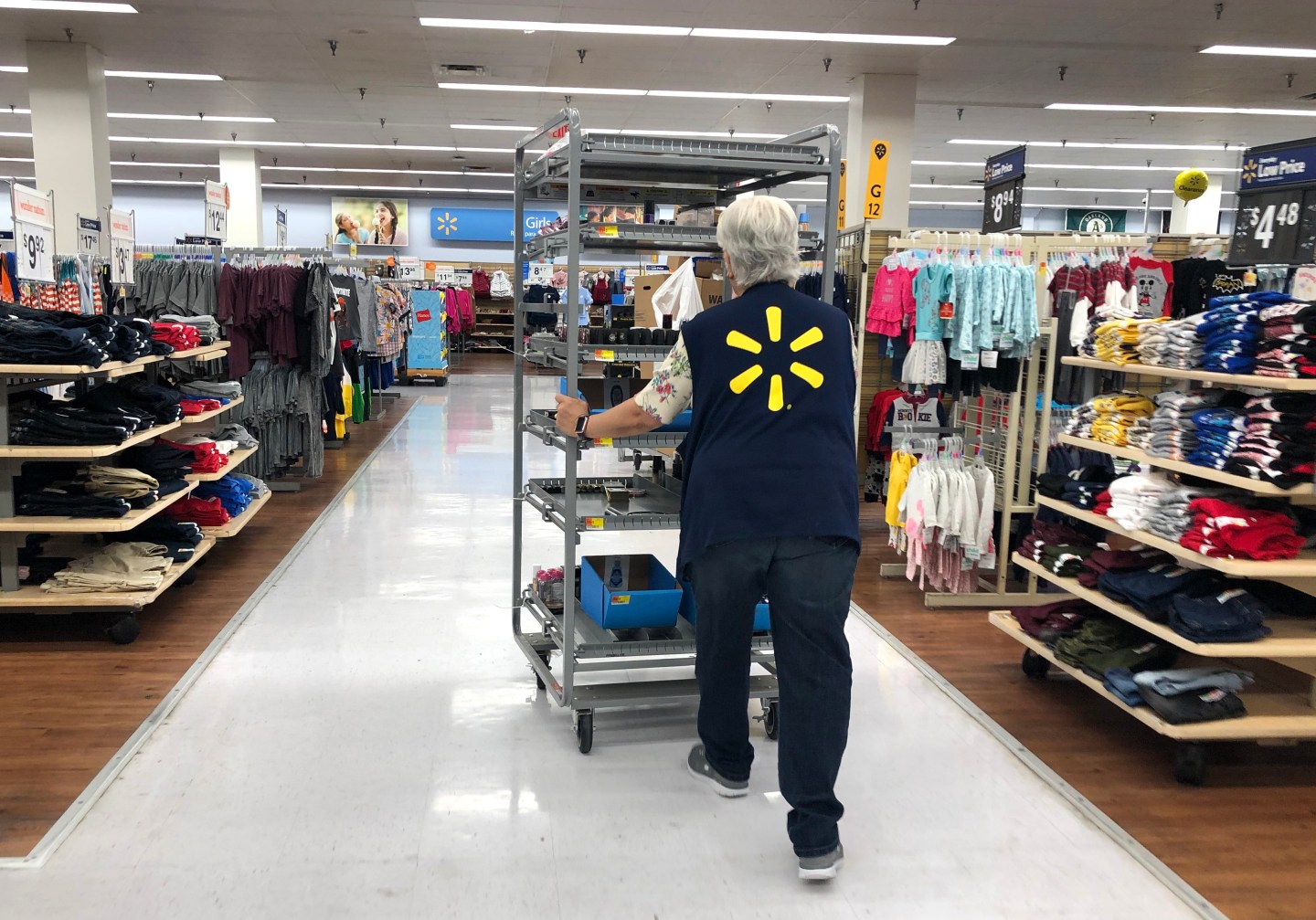 Here’s the good news for Walmart: On Tuesday, it reported a 22nd straight quarter of U.S. comparable sales growth in a row, helped by e-commerce business rising 30%.

Here’s the bad news: That strong digital growth is coming at a great cost and not getting a boost from categories where Walmart has made big bets, namely toys and apparel.

Walmart said that comparable sales, a metric that excludes the impact of recently closed or opened stores, in its $340 billion U.S. business only rose 1.9% during the key holiday quarter, below the 3% the retailer had forecast.

The company has poured tens of billions of dollars into strengthening its e-commerce firepower in the last few years hoping to protect its market share from Amazon, and it has gotten good results. But the efforts have been denting its profits for years.

Biggs, who estimated that online sales would represent half of Walmart’s U.S. sales growth this year, said he was “passionate” about keeping costs in check. That tighter discipline has already been on display by moves such a ending the money-losing Jetblack shopping concierge service last week.

John Furner, the new CEO for Walmart U.S., later said there were opportunities for same-day delivery for general merchandise, a capacity that will cost money to build.

As for the U.S. sales shortfall, the company blamed weak sales of toys, video games, and apparel.

Walmart Inc. chief executive Doug McMillon complained to the analysts about the absence of a hot ‘must-have’ toy during the 2019 holiday period , noting that the closest thing to a blockbuster was a $5 item. That echoed Target’s comments last month when it also reported a lackluster holiday season.

And in a blow to his desire for Walmart to improve its general merchandise performance (groceries generate 56% of U.S. sales) by raising its fashion quotient, sales of apparel, which offers higher profit margins than categories like food, were down, hurt by too much low-priced merchandise.

The numbers showed how much work Walmart, which sells Lord & Taylor products on its site and last year bought women’s fashion brand Scoop, has to do to compete in fashion with Target, whose sales have been bolstered by many new, instantly popular store brands.

Walmart has also been banking on doing a better job with items like video games to reduce its online growth’s reliance on grocery, a major objective McMillon declared in November as he pointed to chronic weakness in online sales of general merchandise where it competes most directly with Amazon. Most of Walmart’s online grocery orders are picked up at any of its 4,600 U.S. stores, something Amazon can’t offer and something that keeps shipping costs in check.

On the whole, Walmart expects more growth in fiscal 2021, which began this month: it forecast U.S. comparable sales will increase at least 2.5%, after rising 2.8% in the year just ended. And U.S. e-commerce growth should come in at 30%, strong though less so than the 37% reported for fiscal 2020.

McMillon told the analysts at its investor day, which is being webcast, that consumers are in good shape with low unemployment and low gas prices. And that, analysts said, shows that any sales shortfall reflects the weakness of a retailer’s individual strategy.

“The American consumer is still reasonably confident,” Neil Saunders, a managing director at GlobalData Retail, said in a note. “Confidence and spending power are there, however, retailers need to work much harder if they want to tap into them.”

Walmart’s forecasts for the whole company don’t include any impact from the deadly coronavirus outbreak in China, though Biggs said the company continues to monitor the situation, and that if it affects its supply chain, as well as stores there, it could end up taking a hit.

Walmart Inc., which also includes Sam’s Club and a massive international business, is also contending with a lot of change in its c-suite as it begins fiscal 2021: a new U.S. CEO in Furner; a new Sam’s Club CEO, Kathryn McLay (who replaces Furner there); and new chief merchandising officer Scott McCall. Total company revenue last year rose 1.9% to $524 billion.

—Mall developer Simon’s Taubman purchase shows high-end is the last refuge
—Bernard Arnault was briefly the world’s richest man. Then coronavirus struck
—Land O’Lakes wants to introduce you to the farmer behind your butter
—Why Bud Light gave its new hard seltzer the family name
—WATCH: Inside the algorithm powering Stitch Fix