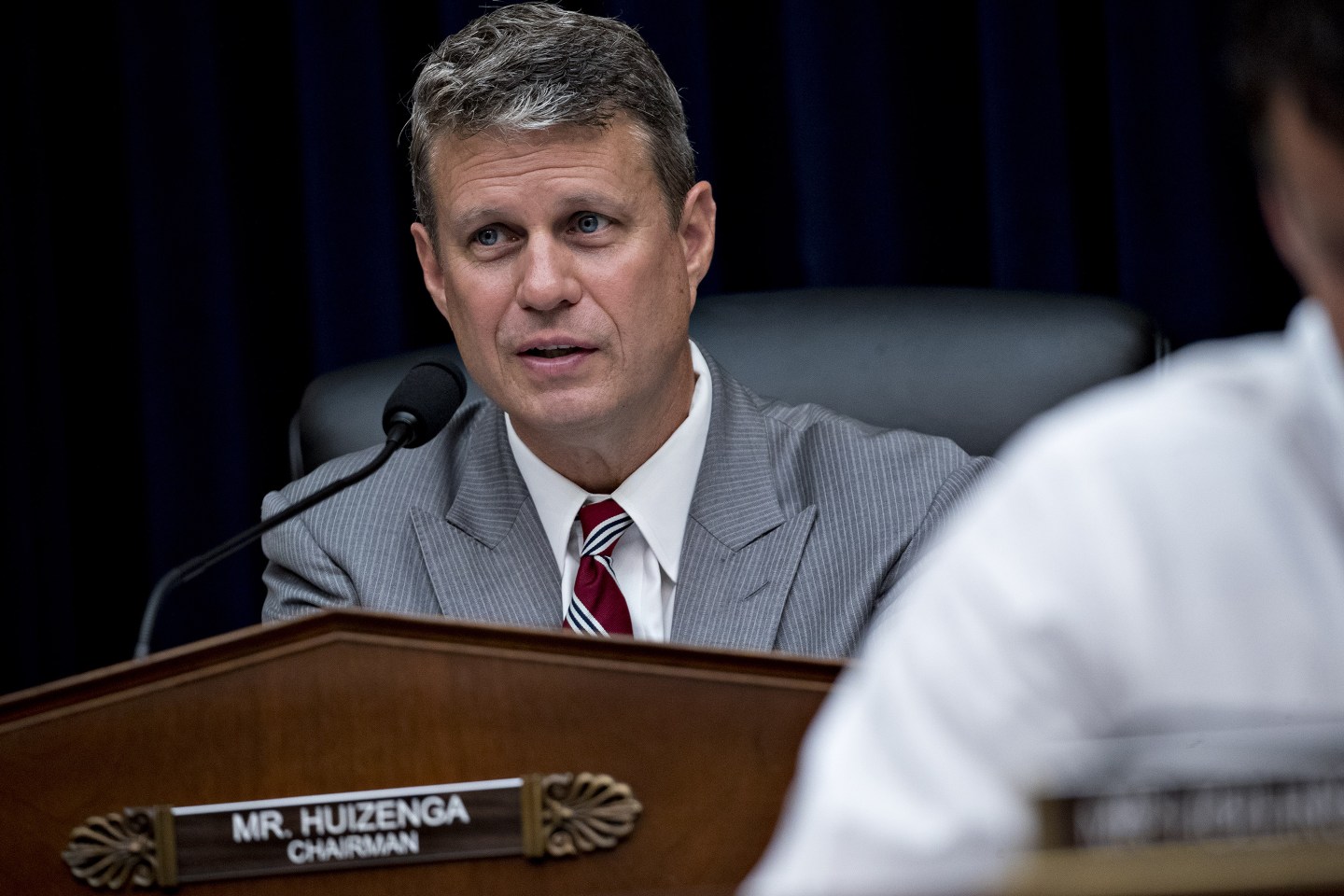 Representative Bill Huizenga, a Republican from Michigan and chairman of the House Capital Markets, Securities, and Investment Subcommittee, speaks during a subcommittee hearing in Washington, D.C., U.S., on Friday, July 14, 2017. The hearing is entitled A Review of Fixed Income Market Structure. Photographer: Andrew Harrer/Bloomberg via Getty Images
Andrew Harrer—Bloomberg via Getty Images

Insider trading is illegal in the United States, but what that actually means is often up to interpretation.

The term has never had an official statuary definition, causing prosecutors a lot of headaches as they attempt to argue cases based on court precedent instead of on a set of established standards.

On Thursday, Congress attempted to amend that by officially banning—and defining—the practice.

“There is currently no bright line statutory prohibition against insider trading, forcing the SEC and [Department of Justice] to rely on more general anti-fraud statutes and decades of case law, subject to interpretation by individual judges,” said Jim Himes on the floor of the House. “It is past time for Congress to provide direction in this area, as there exists a clear and fundamental disadvantage in prosecuting a crime that has never been properly defined.”

The Securities and Exchange Commission currently has its own definition of insider trading and chooses to file lawsuits against individuals who violate those stipulations. It’s then up to the courts to evaluate the SEC’s standards and determine if they’re fair on a case-by-case basis.

The Insider Trading Prohibition Act, which passed the House by an overwhelming majority of 410 to 13, defines insider trading as any trade made on information that has been “obtained wrongfully.” It also prevents people from passing along “material, nonpublic information” to someone “if it’s reasonably foreseeable that the recipient of the information will trade on that information or pass it along to others who will.”

In a statement after the passage of the rule, Himes noted, “The bipartisan passage of this bill represents years of work incorporating ideas and input from regulatory agencies, legal experts, and my colleagues on both sides of the aisle.” He emphasized, “it’s a testament to the fact that Congress can craft meaningful policy that both Democrats and Republicans can support if we fully commit to working across the aisle in good faith.”

But 12 Republican Congressmen and one Independent (who was a Republican until July) voted against the ban. They claim there would be more nay votes if their fellow representatives had taken the time to fully understand the nuances of the bill and were less worried about political capital.

“I think it’s fair to say that people were nervous about voting against something saying it’s going to end insider trading,” said Rep. Bill Huizenga (R-Mich.), who voted against the bill after his proposed amendment to replace specific language in the bill was rejected.

Congressman Warren Davidson (R-Ohio) also agreed that some of his colleagues voted for the bill simply because they didn’t want to face headlines saying they supported insider trading.

“It’s all politics,” Davidson said. “You get a bill where you can run ads saying ‘so-and-so opposes prosecuting insider trading,’ but that’s not actually an honest headline. It’s just a standard political trick, you call something the ‘I Love Puppies Act’ and then a Congressman votes against ‘I love puppies’ and it’s, ‘Why do you hate puppies?’ No one hates puppies, but the bill itself might not be a good bill.”

“It wasn’t clear to me that a lot of congressmen on the floor had a complete grasp on the lines we were drawing,” he said.

Huizenga’s amendment attempted to change precise wording in the bill that allows the prosecution of those trading securities while “aware of material, nonpublic information,” to those “using” the insider information. The current wording of the bill is too broad, he said. Under the act, you can be aware of insider information, explained Huizenga, not use it or act on it, and still be found guilty of the crime.

In total, Fortune heard from seven of the Congressmen who voted against the bill, and all of them cited the exclusion of the Huizenga amendment as at least part of the reason they rejected the ban on insider trading.

Bishop said that the law broadened the “tippee liability” (tippees are those who trade after receiving insider information) that was defined by the Supreme Court. According to the Supreme Court, tippee liability only exists if the tipper actually benefited personally from the disclosure. The language in the bill goes beyond the Supreme Court’s precedent, said Bishop—it’s not just codifying the law, it’s broadening it.

The bill “expands federal criminal liability in an area not authorized by the Constitution (regulations may be appropriate, but the Constitution explicitly authorizes Congress to criminalize only a few activities that are clearly federal in nature),” said Poppy Nelson, chief of staff to Rep. Justin Amash (I-Mich.). “It increases potential liability for innocent actors.” Amash switched his party affiliation to Independent from Republican this July, citing his exhaustion with partisan politics.

Other Congressmen argued that the Supreme Court would likely reject the bill because it was too vague.

“The courts have generally found laws that are ambiguous on their face to be unconstitutional,” said Rep. Morgan Griffith (R-Va.). “Accordingly, I voted no.”

Rep. Thomas Massie (R-Ky.) worried that this would also “open the door for frivolous lawsuits” by creating another definition of insider trading. “It accomplishes very little, yet in what it does do, it is troublingly vague to the point of being constitutionally questionable and empowers the SEC to exempt companies from insider training,” echoed Rep. Chip Roy (R-Md.) in a statement.

Davidson said that while he believes the bill was passed with good intent and the wants to find a version to support, he worries that because it’s vague it gives too much authority to law enforcement officials.

“Right now it seems that targeting people based on political motives is pretty fashionable and certainly catching on all over,” Davidson said. “This bill assumes that law enforcement are made of finer clay than the rest of us, that they’re somehow incorruptible and aren’t going to do bad things with that power. I think that history shows that there are abuses and the best recipe to stop that is clear, concise language that is more specific.”

Huizenga said it’s unlikely the bill will see the light of day in the Senate anyway, but that he did talk to Himes after the vote and the pair agreed to continue to work on the language in the bill.

“The Senate banking committee has gone 500-plus days without even having a markup, so there’s not much in this space that’s going to get through,” said Davidson. “But when something does go through we want to set the markets so that it does become law, it’s a good law.”

Correction: A previous headline on this story stated that 13 Republicans voted against the measure, instead of 12. Rep. Justin Amash switched his party from Republican to Independent in July.

—These tech companies spend the most on lobbying
—Will Trump’s impeachment trial be the end for Democratic senators in the 2020 race?
—2020 Crystal Ball: Predictions for the economy, politics, technology, and more
—All the candidates who qualify for the December Democratic debate—so far
—The ‘princess’ and the prisoner: How China’s Huawei lost public support at home
Get up to speed on your morning commute with Fortune’s CEO Daily newsletter.