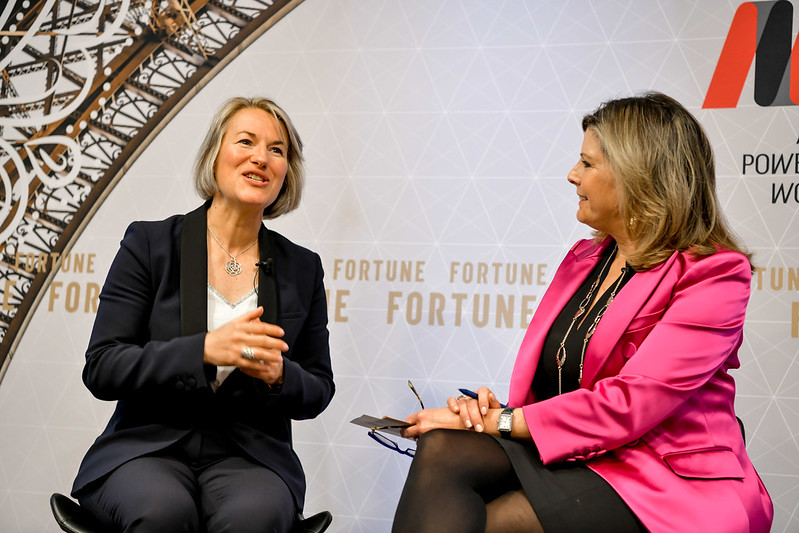 When it comes to getting major companies to act on climate change, CEOs increasingly list pressure from their shareholders, their customers, and their own employees. But for many executives, the pressure is also coming from another, particularly powerful source: their kids.

At Fortune’s Global Forum in Paris last week, the influence of children on their CEO or C-suite parents in pushing for corporate policy shifts on sustainability was a recurring theme.

On Monday, Anne Rigail, CEO of Air France, mentioned that when the concept of “flying shame”—due to the carbon emissions of flying—started to gain momentum, she wasn’t shocked.

“You know it’s not totally new for me, because I have three activists at home: two main children, and one husband,” she said, drawing laughter from the audience.

Air France is trying to lower its carbon emissions by 50% by 2030 from its baseline in 2005, and Rigail admitted her kids are “not yet” satisfied with the efforts.

“I know even my own daughters have made me so much more aware of [sustainability],” said Julie Sweet, CEO of Accenture, at the Fortune event.

The pressure CEOs are feeling from their kids is not surprising, considering the majority of teenagers—in the U.S., at least—are frightened by climate change, and more than 70% of teens and young adults say climate change will cause moderate to great harm to their generation, according to a joint study from the Washington Post and the Kaiser Family Foundation that was released in September. Teens are also slightly more likely than adults to believe that human activity is causing climate change, the study concluded.

There’s evidence that so-called “pester power” can be effective for children looking to influence their parents, even on topics as potentially loaded as climate change policy. In a study from the University of North Carolina published in Nature earlier this year, a control group of children who put pressure on their parents to shift their views about climate change proved surprisingly effective. That was particularly true when the pressure came from daughters, and the change was most significant for parents who had the lowest level of climate concern before the study, a category that skewed conservative and male.

CEOs on the receiving end of such dinner-table arguments, of course, wield a special advantage over non-C-suite moms and dads in appeasing their children’s demands; they have the power to target emissions in big, meaningful ways. They can direct millions or billions of dollars in investment, set the sustainability goals of tens of thousands of employees, and bring their views directly to government—powers their kids are aware of.

“I’m hearing it from many [executives],” said Christiana Figueres, founding partner of the NGO Global Optimism and former executive secretary of the UN Climate Change Convention. “Because some of these kids are out in the streets, demonstrating—and some are demonstrating over the dinner table, asking their parents what they’re doing—what are they truly doing—for their kids’ future.”

At the Fortune Global Forum, Pierre-André de Chalendar, chairman and CEO of French construction giant Saint-Gobain, said he was hearing second-hand of the familial pressure his executives are facing.

“Today, it’s incredible—I cannot go to a meeting of Saint-Gobain executives without hearing this question: you know, when we go back home at night [we’re asked]: ‘Mom and Dad, what is your company doing for the planet?’” he said. “I think everybody’s hearing that.”

Later, he added that his own 22-year-old son is “pushing” him on climate change.

“The pressure’s on him now,” he said with a laugh. “Jokes apart, I told my son . . . this is a great moment for you. You’re young, you understand what your generation needs, and we are able to invest.”

Lohia said this his son, who had held other roles in the business before, has now “found his purpose.”

Nik Gowing, co-director of Thinking the Unthinkable, a specialized business consultancy, noted that executives of small and medium companies are feeling the same pressures—“from our children and the next generation”—but often felt much less able to act than those running large global companies.

Nevertheless, the issue is touching Fortune 500 companies and boutique firms alike. Speaking casually during the Fortune event, other executives said that their own kids, with ages ranging from pre-teen to late 20s, are deeply concerned about climate change, and are pushing them to change their companies’ policies and their own habits, including frequent flying and eating meat.

Meanwhile, executives also acknowledged that sustainability policies are something their younger employees value—and that influences how a firm attracts, motivates and retains workers.

“As your workforce becomes more and more millennial, [company sustainability] becomes so much more fundamental to motivating your workforce,” said Novartis CEO Vasant Narasimhan, speaking on a panel on innovation at the Fortune event.

Figueres said that the pressure from CEOs’ kids is “fantastic.” And she added that executives, particularly in the oil and gas sector, admit it is prompting some hard but important conversations.

“We are humans first, parents second, and then afterwards we’re professionals,” she said. “So they are really struggling to respond to their kids responsibly.”

—Saudi Aramco warns of a different kind of “climate change concern”
—Climate change is hitting the insurance industry hard: How Swiss Re is adapting
—Energy companies say the oil glut—and shrinking profits—aren’t over
—Innovative tech offers a solution to aircraft pollution
—The Future 50 sustainability all stars
Subscribe to The Loop, a weekly look at the revolutions in energy, tech, and sustainability.