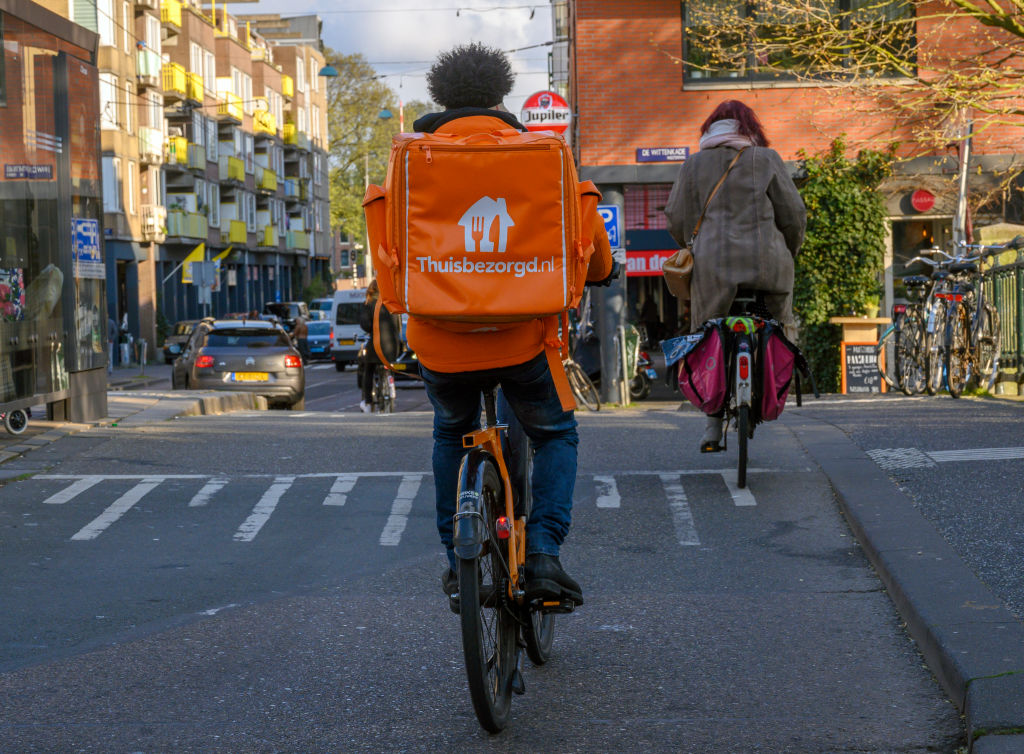 AMSTERDAM, THE NETHERLANDS - APRIL 13: Takeaway.com cyclist rides near Westerpark on April 13, 2019 in Amsterdam, The Netherlands. Takeaway.com, founded by its nowadays CEO Jitse Groen in 2000 under its Dutch name Thuisbezorgd.nl, is a Dutch dot-com company specialized in online food ordering and home delivery as an intermediary online portal between affiliated restaurants and customers who can order food online from their menus, to be delivered directly to them. At present it operates in 10 countries, and its CEO states is the market leader in the Netherlands and Belgium. (Photo by Horacio Villalobos - Corbis/Corbis via Getty Images)
Horacio Villalobos—Corbis via Getty Images

As is the case with food fights, the competition to determine who gets to deliver meals to the doorsteps of European homes and businesses has become one messy affair.

For over a month, two Dutch-based firms have been battling for control of Just Eat, a company that is—for now at least—the biggest and most profitable player (on an EBITDA basis) in the U.K. food delivery market with growing businesses in eight other European countries. They’re hoping that by combining Just Eat with their existing operations, they can achieve enough scale to fend off the challenge of Uber and Amazon, both of which are bankrolling loss-making competitors.

The battle in question will go a long way to deciding who becomes the boss of Europe’s food delivery sector, a $5 billion market likely to be worth tens of billions in the long run. More specifically, it will decide whether a home-grown startup can hold its own against the might of Silicon Valley in what is shaping up to be another bruising round of technology-driven, winner-takes-all capitalism.

Takeaway.com, a Dutch-based startup led by founder Jitse Groen, moved first with an all-share bid that valued Just Eat at 4.9 billion pounds ($6.3 billion), or 731 pence a share. That quickly attracted a counterbid from Prosus, the Amsterdam-based company recently spun off from South Africa’s Naspers as a holding for its Internet assets (chiefly its $130-billion stake in Chinese gaming and social media giant Tencent Holdings). Takeaway is currently the market leader in Germany and the Netherlands, while Prosus’ holdings operate mainly in emerging markets, notably through Indian market leader Swiggy and Brazil’s iFood (a joint venture with Just Eat).

Prosus’ bid was lower, at 710 pence a share, but was in cash. As such, Just Eat shareholders have the choice between cash in the hand today, or the uncertain future upside of a combined Takeaway/Just Eat business.

As it happens, they don’t like either offer much. Eminence Capital, a hedge fund that owns 4.4% of Just Eat, said Takeaway’s offer “grossly” undervalued the U.K. company (Just Eat’s board settled for the politer, “significantly”). Aberdeen Standard Investments, meanwhile, said Prosus should raise its offer by at least 20%.

Takeaway says its proposal, which has been recommended by Just Eat’s board, would create a company with a leading position in three—the Netherlands, Germany and the U.K.—of the four big markets around the world where food delivery is actually profitable. In a presentation aimed at bolstering support on Tuesday, it said it would become the biggest delivery group outside of China, with annual revenues of over 1.2 billion euros—almost twice that of Uber Eats currently.

In Prosus’ own offer document published this week, CEO Bob van Dijk countered that Takeaway underestimates how much it will need to invest to keep Just Eat competitive. When those costs become clear, it said, Takeaway will struggle to avoid the fate of Grubhub. The American food-delivery giant (it also operates in London) saw shares fall 40% after it announced quarterly earnings and guidance that was ravaged by higher marketing and investment costs.

Prosus added that Takeaway’s share price had already fallen over 12% since it made its offer, taking the implied value of the offer below its own. What it didn’t say was that much of that decline was due to an eye-catching dump of Takeaway stock by Delivery Hero, an affiliate where Prosus is the largest shareholder and enjoys board-level representation.

Cat Rock Capital, another shareholder in Just Eat, accused Prosus of undermining Takeaway’s bid, noting that Delivery Hero had sold its shares at a 13% discount to its market value “with no obvious economic justification.”

“The structure and timing of the order appear to be designed to create as much overhang on the Takeaway share price as possible,” ABN Amro analyst Wim Gille said in a note to clients. “We don’t know why Delivery Hero deliberately wants to destroy shareholder value, but cannot exclude it is an expensive attempt to frustrate the deal.”

Delivery Hero didn’t respond to a request for comment.

Irrespective of share price vagaries, Grubhub’s recent warning (along with the revelation that Uber Eats lost $316 million at a basic operating level in the third quarter), have forced all parties to take a more sober view of the outlook. U.K.-based startup Deliveroo, where Amazon led a $575 million funding round in May, likewise lost 232 million pounds in 2018, the last year for which figures are available.

Part of the reason, Grubhub CEO Matt Maloney complained on last month’s analyst call, is that ‘promiscuous’ new consumers are proving less loyal than old ones, and that delivery—once a distinguishing feature of its service—has now been “commoditized”.

“The platforms have all developed their delivery system to grab new customers and independent restaurants, but this model weighs negatively on margins,” said Anne Le Borgne, a portfolio manager with CPR Asset Management.

The same trend of margin pressure also explains why both sides have refused to raise their offers—even if van Dijk told Bloomberg in an interview from August that food-delivery segment represented “probably the largest opportunity I’ve run into in my lifetime.”

“I can fully understand that the current cash values of both our and the competing offer aren’t particularly appealing to the Just Eat shareholders,” Groen said on Monday. “We do however believe that the agreed merger ratio between Just Eat and Takeaway.com is appropriate.”

The Dutch responded with characteristic frankness earlier this week. Takeaway.com’s Groen said that by no means would they overpay for Just Eat. “I don’t want to be the idiot that runs into a ratio that doesn’t make any sense,” Groen said Wednesday at the sidelines of the Morgan Stanley European Technology, Media & Telecom Conference in Barcelona.

This posturing is unlikely to get all parties to the table anytime soon.