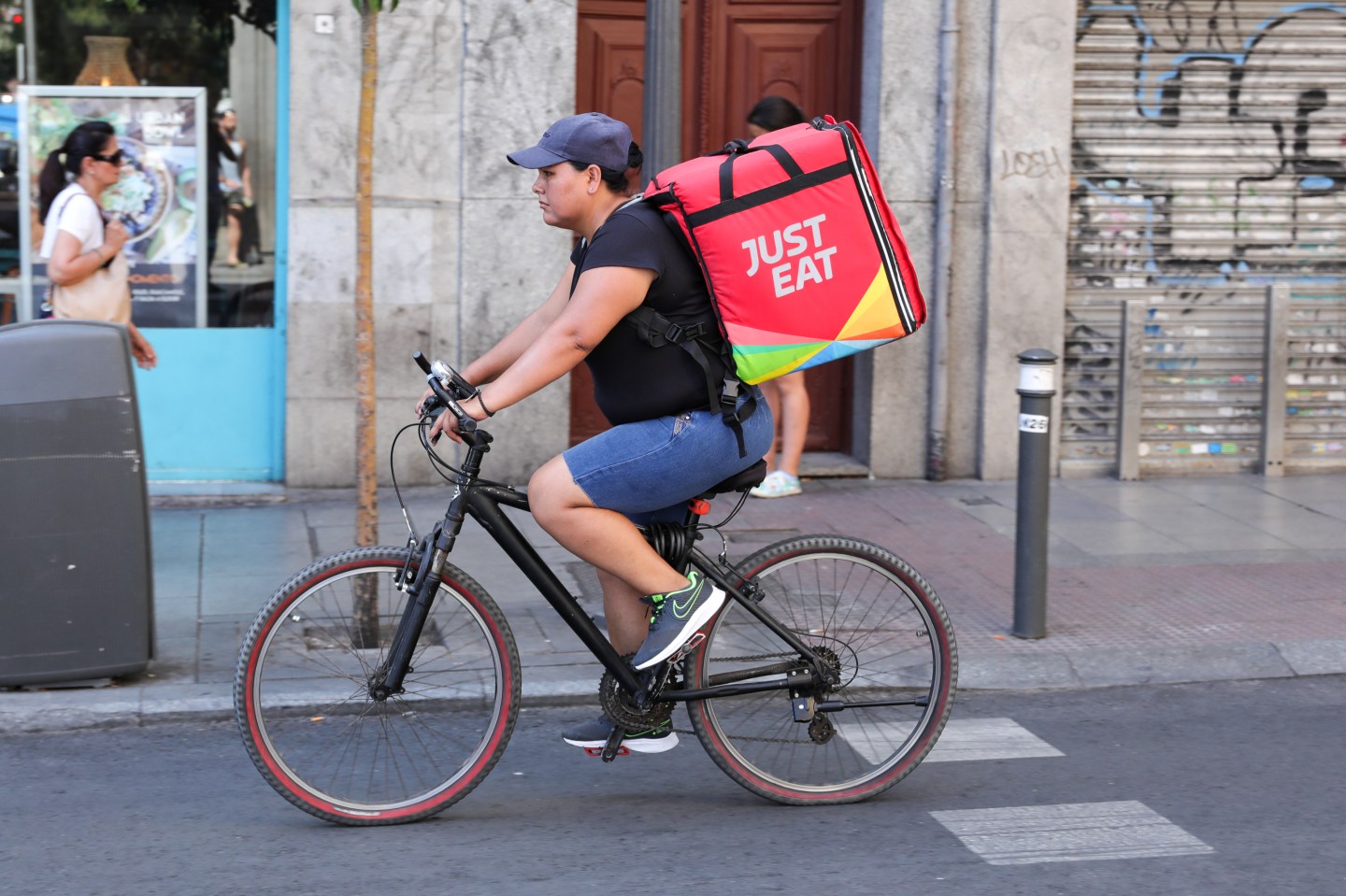 Takeaway.com NV and Prosus NV haven’t started throwing egg rolls at each other, but they aren’t far off.

Prosus, a $114 billion technology investment vehicle spun out of South Africa’s Naspers Ltd. in September, announced a hostile bid last week for British food delivery company Just Eat Plc, challenging an offer from Takeaway that was due to go through by the end of the year.

With shareholders having to choose between two very different deals — a cash bid from Prosus or a merger with Amsterdam-based Takeaway that would combine the two companies into a European food-delivery giant — the battle is turning ugly. The meeting where investors will formally vote on a takeover deal isn’t until December 4, but meanwhile Just Eat’s shares are trading well above both companies’ latest offers as investors anticipate a bidding war.

At the heart of the brewing food fight is the increasingly competitive market for services that pick up meals from restaurants and deliver them to customers. Giants like Uber Technologies Inc.’s Uber Eats platform are going up against a proliferation of apps for a share of the fast-growing sector. Some competitors are being forced out. Amazon.com Inc.-backed service Deliveroo stopped its German operations in August saying it couldn’t afford to keep up with its “brilliant” service standard. Other players are consolidating.

“A cash offer at a 20% premium is better than an all-share offer,” Prosus Chief Executive Officer Bob van Dijk said in emailed comments. “It provides certainty to shareholders and shields them from operational execution risk.”

Trouble is, Takeaway is falling at least in part because its second-largest investor, Delivery Hero SE, is in the process of selling 3 million shares, and Delivery Hero’s largest shareholder is Prosus. That has some Takeaway investors crying foul.

“Amazingly, Prosus has actually offered a discount to the value of the Takeaway.com bid before Prosus’ own portfolio company began selling Takeaway.com shares in the open market,” said Alex Captain, founder and managing partner of Cat Rock Capital Management, which owns shares in both Just Eat and Takeaway and is fiercely in favor of the merger. The investor owns about 3% of Just Eat and 5.6% of Takeaway and said in a statement on Monday that the combination would create a company worth 1,200 pence per share by the end of next year.

Delivery Hero, which lists Prosus Chief Operating Officer Patrick Kolek as the deputy chairman of its six-person supervisory board, has said that it made the decision to sell Takeaway shares independently. It said it had no knowledge of Prosus’s plan to buy Just Eat before the bid was announced. The company said it was instead trying to cash in on a 48% surge in Takeaway’s shares in the first eight months of the year.

According to Prosus’s website, Kolek, as COO, is focused on aligning group strategy with company objectives, leading core business activities and strategic initiatives such as large acquisitions and divestitures.

Takeaway has characterized the Prosus-Delivery Hero connection as a conflict of interest. On Monday, it called on Delivery Hero to abstain from voting on its offer for Just Eat in an upcoming shareholder meeting.

In a statement on Monday, Delivery Hero declined to comment on how it will exercise its voting rights or the role of Kolek on its board, saying “We have been in consultation sessions with the UK authorities and (have) specifically done everything to be in line with all obliged and mandatory steps.”

The U.K.’s Takeover Panel, which regulates acquisitions involving British companies, doesn’t plan to take any action since Delivery Hero is properly disclosing its trades, including describing itself as being in a presumed concert party with Prosus, a person familiar with the matter said. The U.K.’s Financial Conduct Authority, which monitors market abuse, declined to comment on whether it had been asked to investigate the Delivery Hero share dealings in the context of the Prosus offer.

Prosus said in a statement Monday that it doesn’t “control Delivery Hero or its investment decisions.” It also said that “Prosus had not disclosed its interest in making an offer for Just Eat to Delivery Hero” before making the bid.

Just Eat’s board has rejected the Prosus bid and recommended the merger with Takeaway, but shareholders are split.

Winning over big shareholders will be key. At least 75% of Just Eat investors must vote for the Takeaway deal for it to be approved, according to the offer’s terms. The Prosus threshold is 90%, though the company can reduce it to 50% plus one share under certain conditions.

“We stand ready to consider fair offers from Prosus and any other interested buyers, but these offers must compete on a level playing field with the significant value delivered by a Takeaway.com merger,” said Cat Rock’s Captain.