The Ground Shakes Under Britain Again, Forcing the Government to Ban Fracking 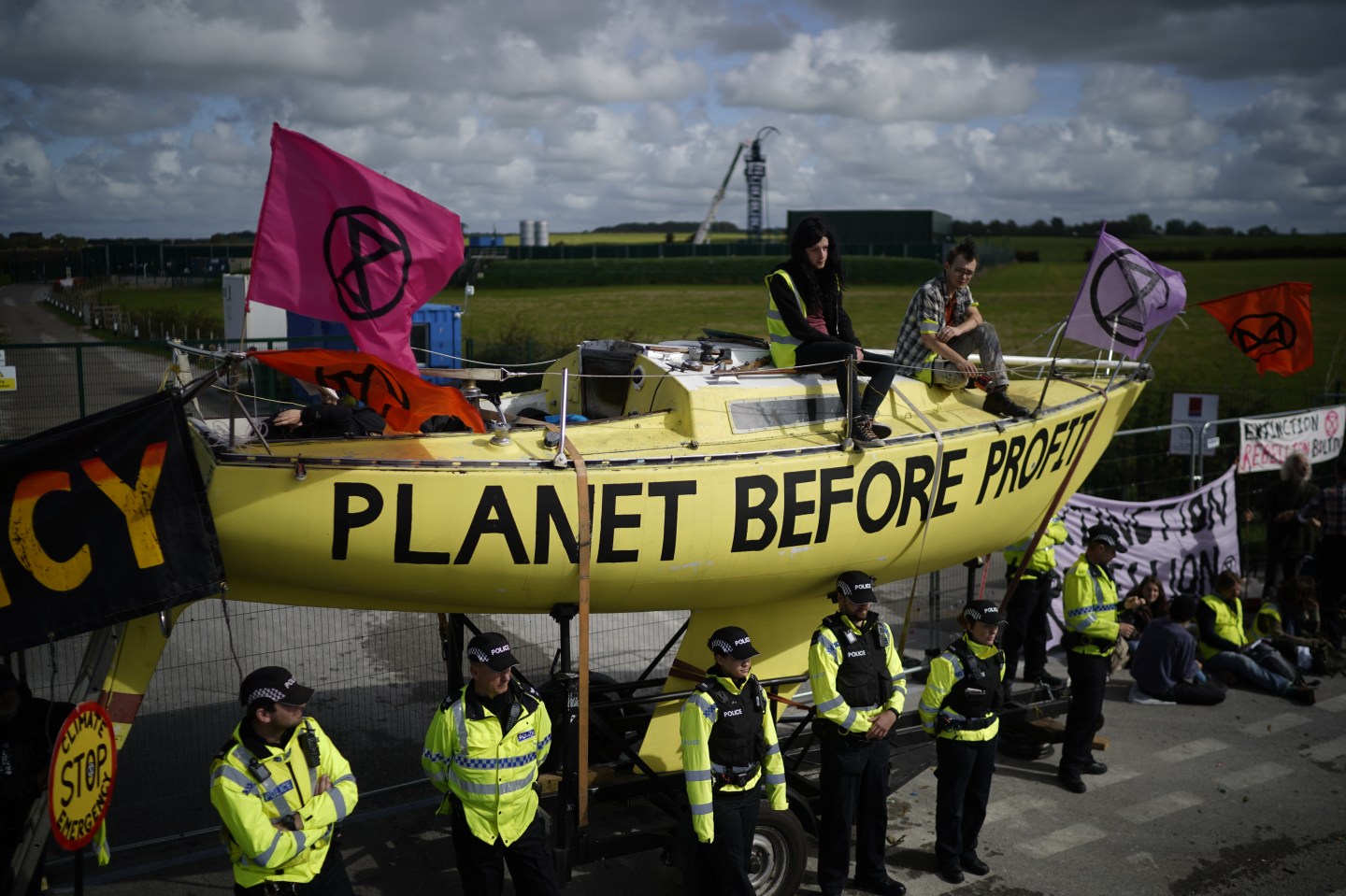 Britain’s dream of turning its huge potential reserves of shale gas into a bountiful source of cheap energy is over—at least for now.

In a surprise U-turn, the British government has withdrawn its support for the fracking of shale gas and has imposed an indefinite moratorium on the practice after a series of small earthquakes rumbled through an area of northern England where test fracking has taken place, alarming local residents.

The decision could kill off efforts to develop an energy source that once held out great hope of meeting British gas needs for decades to come and will leave the U.K. increasingly dependent on imported natural gas. Britain is sitting atop some of Europe’s most promising shale exploration zones.

During hydraulic fracturing—or fracking for short—a mixture of water, sand and chemicals is pumped at high pressure into shale, fracturing the rock and releasing gas trapped there.

With public opposition to fracking mounting because of the increased seismic activity and other environmental concerns, the decision is likely to defuse an issue that could have cost the ruling Conservatives votes in the Dec. 12 general election called by Prime Minister Boris Johnson to seek support for his Brexit plan. The main opposition parties want fracking banned.

“We will not consent to any further shale gas exploration until and unless the science becomes more accurate so that we are able to have greater confidence about the impact on seismic activity,” Business and Energy Secretary Andrea Leadsom said Saturday on BBC Radio.

However, she referred to shale as “a huge opportunity” for the U.K. , pointing out that domestic gas had a smaller carbon footprint than importing gas. She called the decision to halt fracking a disappointment, suggesting that this might not be the last word in the troubled history of fracking in the U.K.

In 2013, the British Geological Survey estimated that a large area of northern England, stretching from Blackpool on the west coast to Scarborough on the east, could contain more than 1,300 trillion cubic feet of shale gas. Experts said at the time that even if only 10% of the gas could be extracted, it could supply the U.K.’s gas needs for 25 years.

The government acted after exploration firm Cuadrilla halted fracking at its Preston New Road site, near Blackpool in northwestern England, following an earthquake measuring 2.9 on the Richter scale in August. Work there had previously been suspended several times under government rules which say the company must take a time out if seismic activity of 0.5 or greater on the Richter scale is recorded.

Cuadrilla only resumed fracking last year after tremors at another of its Lancashire sites in 2011 brought a halt to fracking there. A scientific report commissioned by Cuadrilla at the time found it was “highly probable” that the 2011 tremors were triggered by fracking.

The resumption of fracking last year was met with protests by area residents and environmentalists who oppose using fossil fuels. They are worried about the earthquake risk and the fear fracking chemicals could contaminate groundwater.

England is much more densely populated than the United States and the exploration work is taking place close to towns, meaning local people are more aware of the activity and are more likely to feel tremors.

A government survey found that in June, 35% of Britons opposed fracking, while 15% supported it and the rest had no opinion.

Cuadrilla, which is 48% owned by A.J. Lucas, an Australian energy services provider, and 45% by Riverstone Holdings, a private equity company, says hydraulic fracking has been taking place safely in the U.K. for decades, both onshore and offshore.

Cuadrilla said in October that early flow test data from one of the wells it had drilled at Preston New Road was very encouraging. The gas was virtually free from impurities and, once any water was separated out, could flow directly into the U.K.’s gas transportation network without additional processing, it said.

Ministers imposed the moratorium after a report by the Oil and Gas Authority, a U.K. government agency, found that it was not currently possible to accurately predict the probability or magnitude of earthquakes linked to fracking operations.

Reliant upon Norway and LNG

Britain currently imports just over half the gas it needs. More than 70% of imported gas in 2018 was piped to the U.K. from Norway. Some arrives in the form of liquefied natural gas, with Qatar (6% of total imports), Russia (3.2%) and the United States (2.5%) the UK’s main suppliers of LNG in 2018.

Leadsom, the energy secretary, played down fears that halting fracking could make the U.K. more dependent on Russia and other gas exporters.

“There is a very liquid, big, successful international gas market, and we are able to bring in gas from multiple sites overseas and we don’t have any concerns at all about gas security in the United Kingdom,” she said.

Britain set a target this year of reaching net zero greenhouse gas emissions by 2050 and is building substantial wind and solar power capacity but will still rely heavily on gas for the foreseeable future. Under former Prime Minister Theresa May, the Conservative government strongly supported fracking and proposed legal changes to make it easier for exploration companies to overcome planning hurdles.

The center-right Conservatives, who are traditionally viewed as business friendly, argued that shale gas could bring down energy prices and drive up growth in the U.K. as it had done in the U.S. The energy industry said developing shale could create thousands of jobs.

May’s successor, Johnson, has backed fracking in the past, once referring to fracking as “glorious news for humanity”, according to British press reports.

Environmental group Greenpeace UK called the moratorium “a massive victory for grassroots activists” in a message on Twitter.

Jeremy Corbyn, leader of the opposition Labour Party which wants to ban fracking, said on Twitter that the government’s “temporary pause of fracking” was “an election stunt to try and win a few votes.”

—“Secret” recession signs may provide clues to when the next downturn is coming
—The HENRYs—high earners, not rich yet—may finally be having their moment
—Markets are betting that good things come in threes—especially rate cuts
—Why Virgin Galactic sidestepped a traditional IPO, according to its CEO
—A.I. vs. the wolves of Wall Street
Don’t miss the daily Term Sheet, Fortune’s newsletter on deals and dealmakers.