Sizing Up a Roster of Trump Impeachment Managers 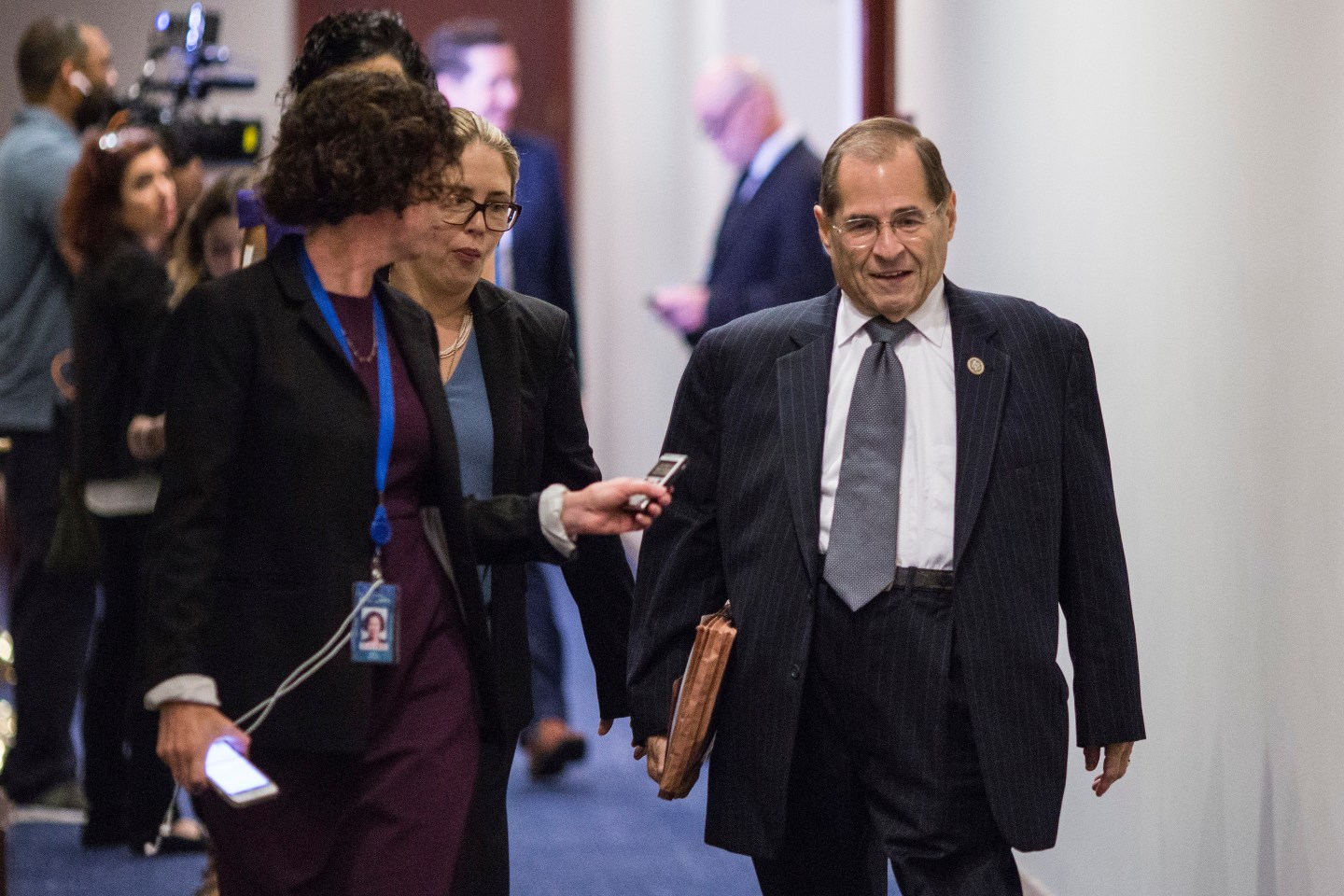 They aren’t in charge right now. But within months, if not earlier, the House Judiciary Committee is likely to be at the forefront of President Donald Trump’s impeachment.

Several Judiciary members have long been agitating for impeachment, arguing for a robust congressional response to the findings of special counsel Robert Mueller. Then came revelations from an intelligence community whistleblower about Trump’s politically pressuring the Ukraine’s president, a watershed event that brought most of the other Democrats onboard.

Should Democrats draft articles of impeachment against Trump, as expected, and approve them, then impeachment managers would be appointed to present the case to the Senate. Traditionally, those managers have come from the Judiciary Committee, which is stacked with lawyers and former prosecutors.

In 1998, 13 Republicans were picked from the panel to argue for the impeachment of President Bill Clinton. He was eventually acquitted by the Senate.

Here’s early look at some of the members on the committee to watch as the process plays out:

The Judiciary panel has been temporarily sidelined as the House intelligence committee investigates Trump’s conduct toward Ukraine. But Judiciary Committee Chairman Jerrold Nadler will play a major role when that investigation is over and articles of impeachment are considered.

Nadler declared in August his panel was already conducting an impeachment investigation, despite House Speaker Nancy Pelosi’s reluctance at the time. His committee spent months investigating Mueller’s report and held a hearing with Mueller, Attorney General William Barr, and others, over the summer. The panel’s requests for documents and testimony were mostly stymied by the White House, while it filed lawsuits to obtain information like the Mueller grand jury materials. All along, Judiciary members have encouraged other Democrats to back impeachment proceedings.

Second in seniority to Nadler is California Rep. Zoe Lofgren, a Democrat who is a close ally of Pelosi and has been in Congress for almost 25 years, representing the San Jose area, including part of Silicon Valley. Lofgren was an aide to a member on the Judiciary panel in the 1970s when Democrats were making the case for President Richard Nixon’s impeachment. She has been one of the least vocal on the panel in favor of impeachment, holding off on endorsing the move until Pelosi came out in favor.

Reps. Steve Cohen of Tennessee and Sheila Jackson Lee of Texas are aggressive questioners who have sat on the panel for many years. Cohen has faced some criticism, though, for bringing a ceramic chicken and a bucket of Kentucky Fried chicken to a hearing when Attorney General William Barr didn’t show up, and Lee had to give up her chairmanship of a Judiciary subcommittee earlier this year following a lawsuit from a former employee who said her sexual assault complaint was mishandled.

Another experienced lawmaker on the panel is New York Rep. Hakeem Jeffries, who is the chairman of the House Democratic Caucus.

As Pelosi resisted impeachment in the spring and summer, a small group of Judiciary members went public with their support. Three of the most vocal impeachment backers were Reps. Jamie Raskin of Maryland, a former constitutional law professor; David Cicilline of Rhode Island, a member of Democratic leadership; and Pramila Jayapal, a progressive caucus co-chair.

The impeachment hawks met with other Democrats to try and get them to support the effort and saw their role as educating the caucus. Many who had been initially reluctant gradually signed on and the numbers supporting an inquiry ticked up.

Pelosi will certainly want some freshmen to represent the House if impeachment comes to a Senate trial, as those new members handed Democrats the House majority. The freshmen on the Judiciary panel have been some of the sharpest questioners during hearings on the Mueller investigation.

Pennsylvania Rep. Mary Gay Scanlon is the committee’s vice chairwoman, a position that has given her elevated status as the panel has considered impeachment. Scanlon and her Pennsylvania colleague, freshman Rep. Madeleine Dean, have been aggressive in questioning Trump administration witnesses and were early impeachment supporters.

Rep. Joe Neguse, the first African American to represent Colorado in the House, was also an early supporter, pushing Pelosi on the issue with others in a May meeting. Neguse is a member of House leadership, helping to represent the freshman class.

Other newcomers who could be managers: Reps. Veronica Escobar of Texas, Debbie Mucarsel-Powell of Florida and Greg Stanton of Arizona.

Picking from other committees

It’s unclear whether Pelosi could appoint managers who aren’t on the Judiciary panel. While it has been tradition to use members of the committee, the Constitution doesn’t make this a requirement.

If Pelosi looked beyond the committees, two front-runners would be House Intelligence Committee Chairman Adam Schiff, (D-Calif.), who is leading the Ukraine probe, and House Oversight and Reform Committee Chairman Elijah Cummings, (D-Md.).

—Why the ouster of U.S. Ambassador to Ukraine is seen in new light with impeachment inquiry
—A running list of questions on the impeachment inquiry, answered
—Who’s Kurt Volker and how he might define Trump’s role in the Ukraine
—12 candidates qualify for October Democratic presidential debate
—How whistleblowers have taken down titans of American business
—25 most powerful women in politics
Follow Fortune on Flipboard to stay up-to-date on the latest news and analysis.